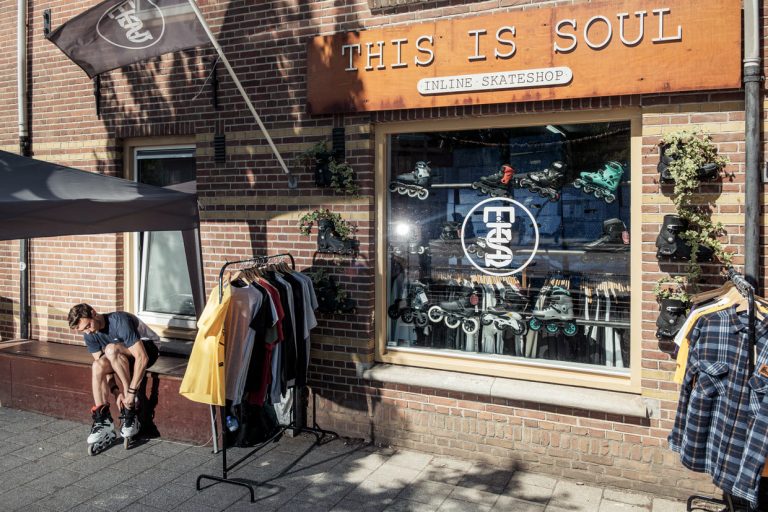 A CONVERSATION WITH THIS IS SOUL SKATE SHOP OWNER IVO VEGTER

The opening of brick and mortar shops catering to the needs of inline skaters has long been a rare, if not entirely odd event. Over the last decades, most retail has gradually moved online. Thus, shopping overseas for ill-fitting clothes, hoping the new boots you ordered actually match your shoe size, and counting the days until your package gets either delivered or seized by your local customs has become an all too familiar experience. While not exactly enjoyable, long-time skaters haven’t had much choice but to adapt to these circumstances. Newcomers, however, can easily be turned off entirely by such ordeals which, at least in part, comes to explain the stagnant state of the sport and the lack of new blood coming in to revive the culture.

While visiting Amsterdam in the summer of 2020, I was struck by the announcement that the long-established This Is Soul skate shop was actually moving into a newer, bigger, more central spot, and invited everyone for their grand opening. The fact that there still is an actual shop in town is already incredible in itself, but to learn that it was growing and moving into such a prime location was simply mind blowing. Of course, I joined the event, which soon turned into quite a celebration! After some beers, and a long talk with shop owner Ivo Vegter, we agreed on expanding our conversation into a written interview so he could share his experience and some of the lessons he’d learned along the way.

Questions were sent… and seemingly forgotten over time. That is, until an email unexpectedly showed up in my inbox, more than a year later. Attached was the interview you’ll find below. Inside, just a few words from Ivo, which sum it all up better than I ever could: “The fact that this took me a year to do says how crazy things have been.” Crazy indeed, as last year’s wave of first-time skaters has consolidated into returning customers and a dedicated generation of inline skaters, keeping the shop busier than ever and its owner very near a severe burnout! So, what happened exactly? Well, this piece should give you a pretty accurate picture of what’s currently going on, so read on my dear friends!

Freddy White: Hey there Ivo, hope you’re doing good! Can you walk us through a brief genesis of This Is Soul, through the early days, and all the following milestones to get here?

Ivo Vegter: I started teaching in 2001 when I was super young. The company was founded when I was 21, back in 2006 with the skate school as a basis. At first, I advised my students to go to the local “fun sports” shop that sold inline skates, but after having a few of them coming back with skates that were way too big for way too much money, I knew I needed to do this myself. I took all the money from the lessons and invested it in inventory so that I could provide skates for my students. At first, these were just used skates that I was pimping to create cool custom skates. I really tried my best to make some really special Frankenstein skates in these days. Those skates were not only bought by my students but also internationally, as they started to get some attention.

There was a webshop called ShopKaput, ran by some of the Dutch aggressive skaters, and it wasn’t until they quit that I felt that I had to up my game because we wouldn’t be much of a sport if there wasn’t at least one specialized aggressive skate shop here, in Holland. That is when I started offering new skates in my webshop.
A few years later, in 2012, we opened our first storefront. A small store in Amsterdam North.

FW: And now, another eight years later, you’ve just opened a massive store in the heart of Amsterdam. How did it become reality, what were the conditions that made this finally possible?

IV: Normally, we have one or two sizes of each skate in stock, but because of the first Corona wave, all the skate brands were out of stock in a heartbeat. I saw it coming, and saw the distribution inventory numbers drop at the same time that there was a massive line of people in front of the store. I knew I needed to buy A LOT to have enough to be able to help these people for the next few months. Luckily, the weather was good and we could help people outside the store, because inside it was instantly a warehouse since I bought everything I could.

It was evident to me that to go forward, we must have a new location. One day, I was just out for a walk and noticed a storefront was empty right next to the Vondelpark.I had been thinking about what the next step for the company would be for years. I made a few concepts of having a skatepark/skateshop combo, and I always liked fantasizing what the ideal skateshop would look like if everything was possible. I want to be where the skaters are, so it would either have to be next to a big skatepark, or next to the Vondelpark where most recreational skaters are.

With that mindset, I had been eying this location for years, and now all of a sudden, I had the need to move, the funds to do it, and my dream spot was free. There was no doubt in my mind and not much later I signed the contract.

FW: Would you say it’s your proudest moment as a shop owner so far?

IV: We once had a pop-up shop in Roskilde Festival, and Broskow was there in the shop and he came to me and said “cool shop”. It meant the world to me coming from him.

FW: What is the store like, and what services do you offer? Between the shop and the lessons, how many bladers work for This Is Soul?

IV: We have about ten skaters (I am not a fan of using “bladers” to describe a skater anymore, since it is the shortened name of a brand and will never be 100% adopted. The other brands will never accept it as the name. It has no future so I think we shouldn’t use it.) working for the company. We have a webshop, skateshop and a skateschool. At the shop, we also do rental skates.

FW: What would you say are the benefits of having a shop in a prime location such as this one, for your business and the sport in general?

IV: If we want to be taken seriously as a shop, we need specialized stores where people come and feel at home. Having this in a prime location establishes us as a sport. If we talk to the municipality right now, we are taken seriously so there are a lot more possibilities because of it.

There is such a different feeling with buying skates from us, compared to a store where you know they do not care. I hope this helps in converting one-time buyers into people who identify as skaters.

FW: How do you think this massive influx of new skaters will evolve in the future? And what does it mean for our industry in general?

IV: I think the interest will stay from the general public. Right now it is up to us to include them in our community and make it not just a thing they do when the gyms are closed, but help them embrace skating as a way of life.

FW: In your official announcement, you concluded by thanking Covid-19 for making all this possible. Do you think this pandemic might be the most important event for the long-term sustainability of inline skating so far?

IV: It might be the most important event so far, yes, but I am also afraid it might be the worst thing. Right now a lot of players that simply don’t care about us are jumping in the sport, just like in the ’90s. We are not ready as a sport for this growth and neither do we deserve it. I would have liked this to have happened in a situation where we have a lot more structures in place that can carry this new load that has been dumped on us.

The future will tell if we do a good enough job as a sport adapting to the new normal in a way where we do actually deserve all this attention. Because if not, it will implode just like it did in 2000 and I don’t know what kind of graveyard this will leave behind.

FW: Any words of advice you would want to share with aspiring skate shop owners, on how to get started and grow in this industry?

IV: If you want to be in this industry then that is great, the advice I have is that the main goal should be to share your passion. If you do a good job at that, then you deserve your spot.

IV: Special thank you to Erik Droogh and Thijs Tel who pulled me through the first wave of Corona madness. I would have had a burnout without them, for sure!