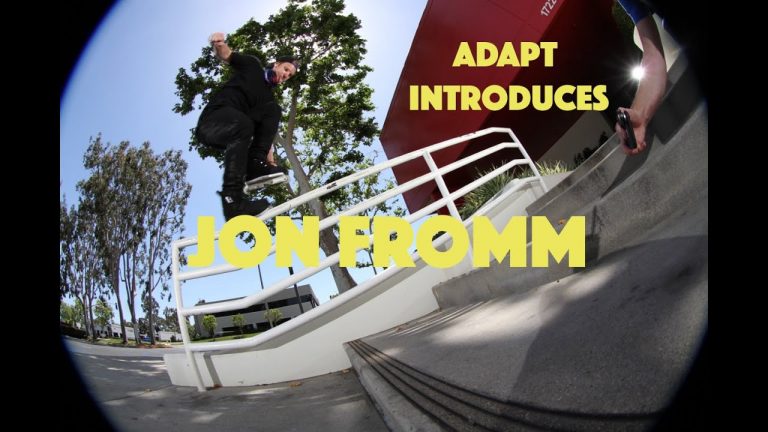 The Adapt Brand has welcomed the incredibly talented Jon Fromm to their all-star pro team! After Jon departed from his previous skate sponsor, there was much speculation on which skates the ultra-tech skater would land in next and it seems that he has finally found a home with Adapt.

We had the chance to speak with Jon about his thoughts of his new skates and his new addition to the Adapt pro team. Check out what he had to say.

Kevin Little | So just to start, congratulations on your addition to the Adapt pro team! So were Adapts the first blades that you started riding after you stopped riding Razors earlier this year?

Jon Fromm | Thanks, man. I appreciate that. And yes they were. Russell Day gave me an old pair of his Adapts right after Pow Wow.

KL | What was the transition like from riding a hardboot Razors skates for so long to riding Adapts? Weren’t you also nursing an injury around that time too?

KL | So what made you immediately drawn to the Adapt boots, enough to where you felt that was the right skate for you out of all the models out right now?

JF | That was a tough one. It was mainly Russell Day. He had been egging me on forever to try them, and one day I just hit the bullet. Everything just seemed to work out after that haha

KL | Love at first roll it sounds like! So once you found out that Adapts were the right blade for your style, who made the first move? Did you reach out to Adapt or did they kind of see that you were enjoying them and make the move?

JF | So me and Pieter have been friends for a while. Met them a handful of times in SD. Actually Pieter approached me at Winterclash, and we just chatted. It was no pressure, but just a conversation of “Hey if you ever wanna try the skates, please reach out”. After liking the skates that Russ gave me, I purchased my first pair (Adapt Rivales). They worked well, and so the dialect between me and Pieter began.

KL | Seems like a great way to start a working relationship. What is it about the Rivales that you like? It is quite a different feeling skate than Razors, which you rode for a very long time.

JF | So I’m actually on the Brutales now. That’s what I was riding in the section. I liked the Rivales. They were an easy transition from Razors. However, they felt a little flexy, so I went with the Brutales which are stiffer. That boot is extremely different than razors. At first it was super weird, but I adjusted rather fast. Now they are the most responsive skates ever, and I’m so stoked on how they ride.

KL | I know it is early in your tenure with the brand but is there any discussions on a pro skate?You are long over due for one and the public is definitely behind you getting one.

JF |So Pieter has discussed it. It will happen one day, but that will be down the line. There’s a little bit of uncertainty with Coronavirus and of course there are a few other riders that are next in line. I’m in no rush. I’m super grateful for everything this year.

KL | Awesome! Well congratulations on your new addition to Adapt and is there anyone that you would like to thank for their support?

JF |Just want to thank everyone who supported me this year. It’s been a very tough one for me. I made a huge change, and couldn’t have done it without certain people. My family, my amazing girlfriend Desiree, Lawrence Ingraham, Dave Paine, Russell Day, Travis Stewart, Ryan Buck Strauss and of course Pieter and Olga from Adapt.

BE SURE TO FOLLOW JON FROMM @JONFROMM & ADAPT SKATES @ADAPTBRAND & VISIT THEIR SITE AT ADAPTBRAND.COM