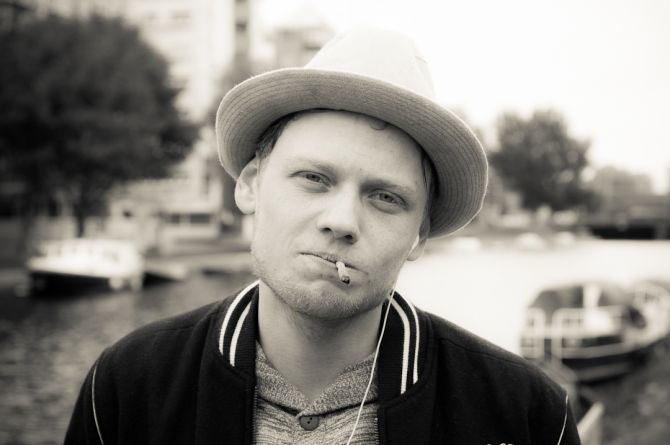 Please Introduce yourself and tell us a little bit about you and your music.

My name is Daan Hegt. Skater/Producer/Founded Flash Grimey in 2009 with my boy Joel Vd Lichte.

Born and raised in Amsterdam! Most beautiful city in the world!

Tell us about your music and your new release.

Well Flashgrimey was founded in 2009 with my long time vriend Joel Vd lichte. We went to the same music school in Utrecht. Joel is working on graduating this year.. I got my diploma last year.. We released our first EP called White Boy Junk in early 2012. In December we are going to release our new EP called White Boy Funk. Flash Grimey’s White Boy Funk is a collection of various styles and ideas worked out into concrete concepts. The album features a total of 20 songs however some are combined because we felt they would be a good match. During the production process White Boy Funk somehow became an ode to imperfection which is an essential element of our music. And although some vocals are performed in Dutch we still hope that listeners that don’t speak the language will understand what we’re trying to express.

Where do you want to go with your music or with your skating? What are your goals and dreams?

Well I just want people to enjoy our music! Be happy with myself at the end of the day. That’s all.

When did the music thing start and how did u get into skating? You know, tell us the whole story.

Well I grew up in the south east district of Amsterdam. In my neighbourhood there was this legendary skater Mark Pruys aka the rooie dakduivel who introduced me to the dutch blading scene. He gave me a copy of ULTRA, an oldschool dutch blading vhs and I was hooked. Years later I was still holding on to that particular vhs because of the emotional value. I lent it to Tyron Ballentine and now it’s Rocket Power on there… (Dude dubed that lame cartoon all over the vhs! Haha love you Tyron!)

Oddly enough it was also a rollerblader who introduced me to music making. He showed me how to make beats on the computer. So if it wasn’t for rollerblading I wouldn’t be making these joints!

What’s more important in your life: music or skating? Has it always been that way?

Skating was a really big part of my life during my years as a teenager. When I was younger I used to drum and play in bands. I stopped doing that to skate more. Later however music took over again. It’s always been that way throughout my life. I just love doing creative stuff: art, music, skating.

What have been your greatest achievements in music and in skating?

Skating: in 2004 I won a national contest and got a 4 year contract with redbull, I was pretty proud of that. Skating in the IMYTA Amsterdam finals in 2005, we are still talking about that competition to this day. It was legendary. Music: we didn’t achieve anything great yet! But we are working on it. Our last ep White Boy Funk, I’m pretty proud of that.

What makes the Amsterdam scene special?

The weather! The people, the Architecture. And its smallness and laws!

Amsterdam is part of me and my history. I was born and raised here, my family too and so on. I can’t think of another city to live in. It’s funny: when I’m 20 minutes away from my city I already get homesick.