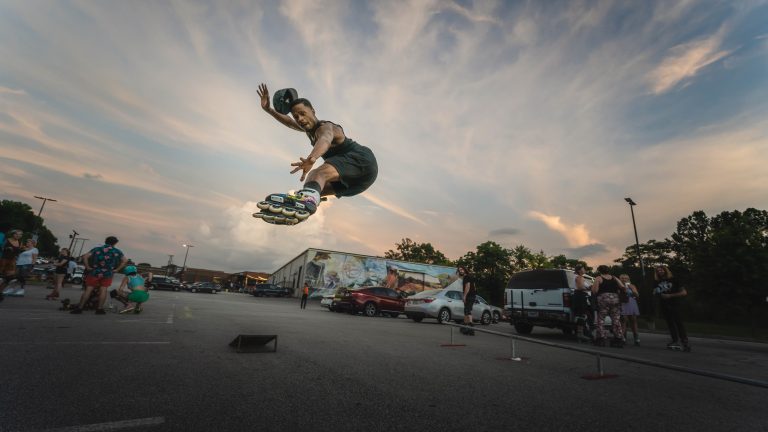 Native Atlanta videographer Brandon Andersen has just released his newest video offering titled “GRAVITY“, in collaboration with Sk8tl & RollATL. “GRAVITY” is a beautifully filmed and narrated piece of blade cinema that highlights skaters of all different backgrounds and skill levels and does an amazing job of showing the tight-knit comradery that exists in the Atlanta skate scene. “GRAVITY” also explores the massive uprising of blading and quad skaters in Atlanta and serves as proof of the hard work that individuals within the ATL scene have done and the growth that has been made in a rather short period. We can all learn something from the Atlanta skate scene in how they have helped cultivate a positive and welcoming environment for everyone. Kudos, ATLiens! <3

We had the opportunity to speak with Brandon Andersen about the making of his video “GRAVITY” and got to pick his brain about the sudden skating resurgence that is brewing within A-Town, this is what he had to say:

Kevin Little: Thanks for taking the time out to speak with us, Brandon. You recently dropped your newest video “GRAVITY”, which isn’t your typical skate video, as it seems to document more of the connection between the skaters and the positivity behind the act of skating. So what was your motivation in making “GRAVITY”?

Brandon Andersen: The motivation was Atlanta! The scene here has experienced a massive growth over the last year and a half in all aspects of skating (quads, inline, aggressive etc.) and I felt there was a need to document this said growth and share it. Maybe entice more people to pick up a pair of skates and join in.

KL: In your opinion what were some of the major contributing factors for the sudden growth in your local skate scene?

BA: I think it was a couple things, the pandemic definitely being the major factor but, also there was an uprising in creating local groups like SK8TL which opened the door to making everyone feel welcome! A Thursday Night Skate was born and that has become a great training ground and an outlet everyone looks forward to every week.

KL: So paint me a pretty picture of what your typical Thursday Night Skate looks like each week!

BA: So Everybody’s Thursday is in this massive parking lot that is surrounded by a ton of local businesses (Monday Night Garage, Wild Heaven, Lean Draft House) It’s become an escape from our daily lives. People drive from all over Metro Atlanta to see their friends every week, support these businesses, and just celebrate our community. From cones, to quads, ramps, and music- it’s a very welcoming environment for anyone looking to share their passion with 100 other people.

KL: Since you have seen so much success coming from the ATL area, what could other scenes do to help foster more participation in their local skate scenes?

BA: I think the most important part is having a weekly meet-up in a public space. We have Sunday Funday in Atlanta as well and that has had a massive impact on getting people started. The reason for weekly is it let’s people build a habit out of showing up and finding their passion in it! People are still learning what skating is so having a weekly session in a public space like your local park or parking lot by a brewery or downtown scene allows them to ask the questions to make them feel comfortable and understand what skating is.

KL: Have you seen a lot of people broadening their horizons and trying out other skating disciplines? Like quads to blades or vice versa?

BA: Absolutely, I believe that’s part of the natural growth of also having a weekly meetup. You can come and learn on your distance skates but, then you may see somebody grind a rail or jam skating in quads and it may speak to you. There are a few people in the scene here that have quads for Thursday Night skates but also a pair of aggressive skates for Sunday Skatepark sessions.

KL: Now that the scene resurgence is in full swing, are there any blading or quad competitions going on in the near future?

BA: J-Bah just had his annual J-BahBQ/Blader Day meetup back in early September but, coming up and due to the pandemic, there is a special edition of A2A happening on October 24th which is the oldest and most famous road skate in America that’s held in Georgia every year. Other than that, we are just focusing on community meetups.

KL: So now that Gravity has been released, what has the response been like from your local community? Has there been a demand for more videos in the future?

BA: The response has honestly left me speechless. The community embraced the film so tightly and I wasn’t ready for it. Due to the fact it was for our scene, it wasn’t for me. I saw an opportunity to tell a story and that’s all I wanted to do. Regarding a follow up, “Let’s continue this story” and we’ll see what it holds.

KL: Thank you so much for taking the time to answer our questions, Brandon! Is there anyone that you would like to thank for their contributions?

BA: Yeah, first off thank you Kevin for reaching out and making this happen! Shout out to all of our groups on Instagram and Facebook for making meetups happen weekly!