ARE YOU THERE? NOT PRO AND NEVER WANT TO BE 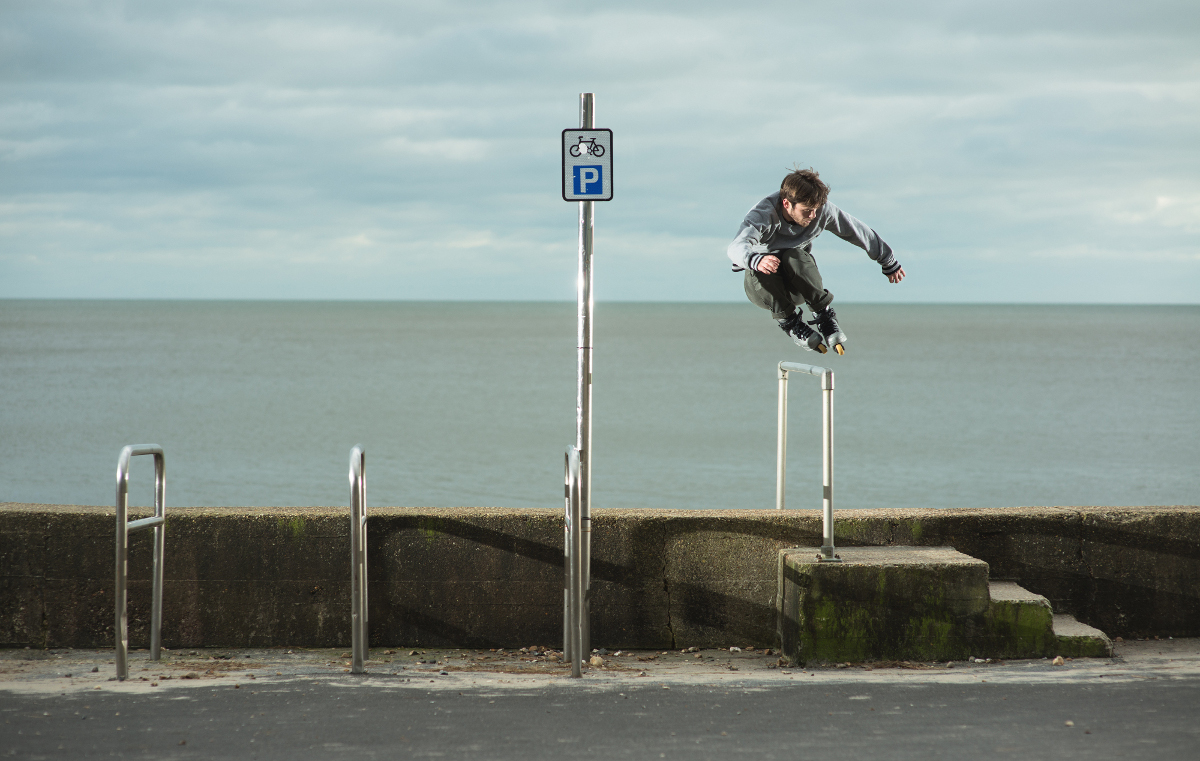 At a time of uncertainty, expression will be (and is) as important as ever. In case you missed the news, something different happened here in the UK the other day. We voted to leave the EU. Why? The motives are certainly not to do with economics. Or immigration for that matter.

The motive was cultural.

The details of this are not really a matter for a rollerblading article. However, almost always, within the thing that created the problem is the seed of its own destruction.
After rollerblading’s “identity crisis” (throughout the Barely Dead era) rollerblading has seen growing diversity and non-judgment within the community. This cultural exploration needs to continue. The freedom that people have to express their view of rollerblading is exactly what engages audiences and encourages growth.

Isn’t expression something that only artists do?

Of course not, everyone can express something. Having said that, Nick Riggle, a former professional rollerblader, and Philosopher, argued that skating is “a form of street art” and “street art is art”1. This means that generally speaking, the people who skate in public space for aesthetic ends are actually artists.

Even if you do not like to consider yourself as an artist you are almost certainly expressing something when you skate, film and edit.

Many times “the artist [or skater – my words] doesn’t know what he is going to express until he has expressed it. He cannot state in advance what the completed work will look like.2” Whilst many skaters have an “explore and see what happens” attitude, there will be others who will know what they are looking for beforehand. Thus, it is difficult to paint a universal picture of expression within rollerblading.

Expressing something is not always easy either. How many times have you got angry with yourself, your friends or a random bit of the environment because you cannot do a trick the way you imagined it? Maybe it leaves you disappointed for the rest the day. Even a whole week. I am guilty of this a thousand times over.
Karen Archey acknowledged this in an article claiming that an “unprofessional artist” is just as successful as a professional artist. She states, “your body of work is a mark of your passages, the richest of your thoughts and the deepest of your emotions. Simply manifesting this into art is hard enough”3.

Tom Hyser, who has been responsible for many successful companies and products over rollerblading’s history, such as Skatepile, K2 Fatty, and Face Wheels, recently shared his thoughts about the implications of being unprofessional.

Hyser was approached for this article but was unobtainable. If you didn’t see his original post, here it is below in full.

“The change comes within fellas. Time to act pro. We have a handful of real “Pro” riders in the game. You guys know who you are. Don’t do stupid stuff in public (skatepark, contests etc) Stop pounding beers and blazing cigs/grass in your edits. It’s lame, do that in your hotel or at your house. We are not skateboarding, we don’t have the massive audience and clean cut dudes for TV that can support the dirt-bag skateboard brands. Our industry can’t support everyone acting like . Don’t ignore the young kid at the skatepark when he is trying to be down (even the young skateboard/scooter kid is wanting to be down. Pay attention!). We need young kids in the sport again. I have a 9yr old and a 12yr old. Both love to blade. I can’t show them most of the video parts out there because they are full of crap. Bringing them to a contest is full of the same delusional behaviour. We’ve been kicked out of every venue along our journey. Hotels, skate-camps, X-games, etc. Mostly due to our own lack of maturity/actions which started with my generation back in the 90’s. I was just at a big contest in ATL. It was really fun but everyone was 20 years +. This is not sweet. If you are running an event don’t be drunk all day. Party when the job is done. If you are a pro at a contest try your hardest, part when you are done and the young kids have gone. Don’t go to the event if you are going to skate half ass. Skate like your life depends on it. “aggressive” skating is going to be done if “we” the skaters don’t wise up a bit”. Or maybe you just wanna impress your friends and stay in a small little bubble where you and your buddies keep telling each other that you are rad”

There is certainly some things to take on board here. Other things are, perhaps, a little unfair. Particularly, outing skateboard brands (in general) as “dirt-bags”. Let’s focus on the parts about rollerbladers and rollerblading edits, however.

Hyser believes that he “can’t show [kids] most of the edits out there as they are full of crap”. Later adding “Aggressive skating will be done if we don’t wise up a bit”.

It seems that Hyser would approve of a universal standardization of rollerblading’s output. A standardization that, perhaps, would not only be safe for the public to consume but actually generate more interest in Rollerblading too. Particularly with children. If not, the decline will continue.

Sam Currie, the owner of dirt-box, disagrees. He stated in an interview (for this article) that “the viewer has the right to interpret video material as they please […] I don’t see the benefit of covering rollerblading with a beige blanket of products and content”.

This suggests that rules dictated by corporate representatives would limit interest. In fact, Currie added “I work on dirt-box alongside my full-time job. Why would I create something that I thought was boring so that parents might approve of it? This is my passion.”

Hyser blames the community though for not being professional enough. Pinpointing this as being a source of the industries struggle. He says it is “time to act pro […] the change comes from within […] our industry can’t support everyone acting like dirt-bags ”.

This point plays on the idea that rollerbladers are smoking, drinking and being immature in their edits (and at events).

Currie also objects to this. Currie believes that “the industry is at fault, for failing to recognize and cover expressive and/or explicit content in more detail”.

If this was the case, Hyser’s dismissive approach would be upturned. Industry coverage of the content would help viewers understand the material, which might encourage thought and further creation. Indeed, it could be positive.

A good example to give of this would be an edit of my own, Ellesse Warrior. Throughout the video a young male figure (and voice) appears, boasting about being high on magic mushrooms, selling drugs to children and dancing aggressively to Gabba music in derelict council estates. A video, safely assumed, that Hyser would be opposed to.

You can view the video below.

The edit received less attention than my earlier ones. Reputable platforms like Be-Mag and Wheelscene showed no interest in it.

The obvious argument is that the edit glorifies and advocates the use and sales of Class A drugs. Perhaps also, more generally, it shows an extreme but uncomfortable view of coming from a impoverish caucasian Western background. Whilst having low morals and self-esteem. Something parents may want to shelter their children from.

However, I don’t advocate the use and sales of Class A drugs, nor am I interested in Class A drugs. I don’t go to raves and I am not aggressive. My lifestyle is the opposite.

What was the edit about then?

At this point, all I’ll say is that literalism is the death of intelligence. And, obviously, the skating is held in contrast with footage of the character “Devvo”, created by artist and actor David Firth.

Where does this leave us then if I won’t explain?

Well, it leaves us with some more questions. Should people have the freedom to express themselves? Could a better understanding of products and content be obtained from wider coverage? Would understanding then give people a chance to make informed judgments about the material? Would having an informed judgement about something contribute to that person’s individuality? What could individuality bring to the table of rollerblading? Would it be positive?

These are all good questions to ask.

So, rollerblading is at a point of diversity. This diversity has grown organically out of desperate identity crisis. To be a rollerblader now can be challenging. It is definitely exciting. The variety of expression is inspiring.

There is a debate about how this affects the growth and interest in rollerblading, however. Tom Hyser believes that rollerbladers should take on more responsibility and “act pro”. Creating a cleaner image may make parents and children more favourable towards rollerblading over other industries. Sam Currie believes that rollerbladers should have the freedom to skate, act and create exactly how they wish to. The thoughts, feelings, and emotions that go into the creation, along with adequate coverage, is what will inspire younger generations. Those younger generations should have the right to choose for themselves.

The cultural shift that rollerblading has been experiencing is responsible for how exciting it is. Rollerblading needs professionals, sure. But, don’t count out the unprofessional. They give more than they are given credit for.

There are no rules.

1 The Aesthetics of Skating | The Creativity Post
2. Art as expression | Britannica.com
3. How to be an unprofessional artist – Frontpage – e-flux …