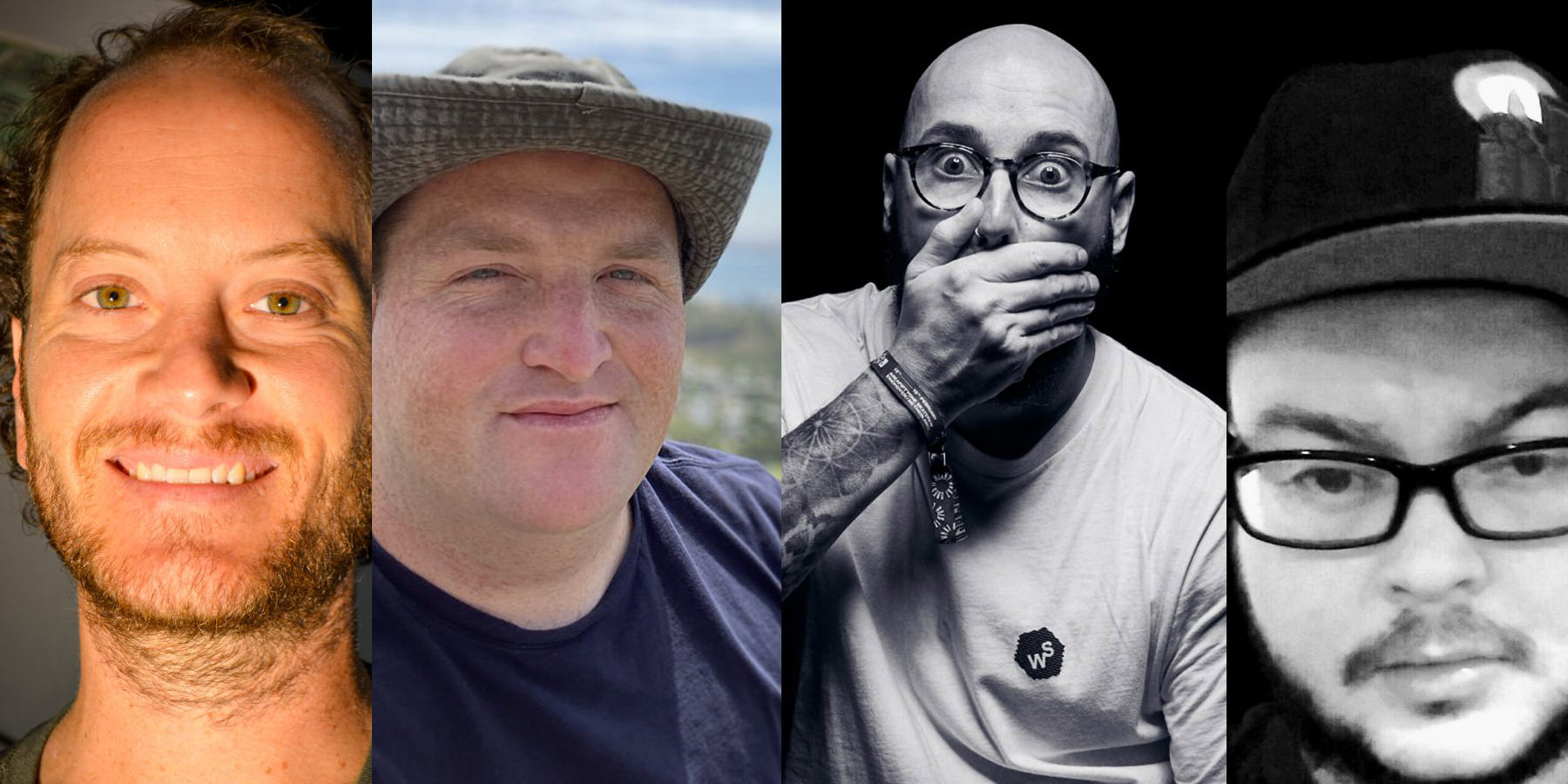 For our fourth installment of our “Best Blade Video” series, we turn towards those who work in blade media to get some added perspective to the discussion of influential videos. We spoke to David McNamara (Wheel Scene), Chad Anthony (Skitch Magazine) as well as Daniel Nodzak and Travis Stewart (Blader Union) to talk about the videos that are near and dear to them and how these played a role in their skate lives.

There are a few more days to vote on your favorite skate videos, so be sure to vote below! We will be announcing the winner our our “Best Blade Video” survey soon!

When Strange Creatures released their first team video, I enjoyed it but I wasn’t blown away. I liked the skaters, their look, Amir Amadi’s style of filming and editing, and the hope that came with a new, young, motivated crew in blading. It was an injection of fresh energy into the culture and they brought Alex Broskow into the fold, which instantly gave them a level of credibility. It reminded me of Brandon Negrete’s Forever Now, but with better skating. This looked more like a traveling band than a group of skaters and I perhaps enjoyed the style and imagery more than some of the skating within the video.

Then the crew released Voodoo Show in 2012 and it felt like they had realised their true potential. After watching it for the first time, I instantly pressed play again. There is not a bad section in this video – each skater holds their own and brings something to the table. There are exceptional performances from Dean Coward, Matt Luda, Dylan Davis and they strengthened their squad with Brandon Smith, who had an impeccable opening section. I was pleasantly surprised by how impressive and varied Matt Langel’s part was considering how little I had seen of his skating previously. Alex Broskow had the ender timed to David Bowie’s Five Years and it’s one of my favourite sections he has ever made…and he has a lot of remarkable ones to choose from! But Adam Brierley stole the show as the fresh young talent that could hold his own against the greatness of Smith and Broskow, matching their technical ability with hurricane wallrides and disaster hurricane fishbrains, and lacing some of the best lines in the entire video. I thought this section marked the dawn of a new star in blading and that Adam would go on to have a pro skate with his name on it, but it would be the last full part that he filmed.

Amir sharpened his editing skills and solidified the look he was developing in his second full-length project and everything suggested Strange Creatures were the most exciting crew in blading at that time, which is why it is such a shame that this is the last video they released. Sure, they dropped a promo for their collaboration skate with Valo that featured the crew tearing through the streets of San Francisco, but nothing that matched the energy and promise of Voodoo Show. The only video that has come close to matching the spirit of Voodoo Show is Haitian Magazine’s Lost Tapes, which documents an incredible time when a group of young and hungry skaters shared a house in Oakland, California. Voodoo Show highlights how powerful and captivating it can be when likeminded talented skaters join forces to create something truly special.

I sat down today and wrote out a couple top ten lists of my favorite videos using a few different criteria. Each time I found that Carl Sturgess’ 2005 film ‘Killerboots’ was consistently among my top picks. It makes sense if you know me. I go back to it often the way many people rewatch episodes of The Office on Netflix rather than hunt down something new. I know what I’m getting and it’s never a disappointment.

There’s not a wasted moment in its 36 minute runtime. From Haffey to Stockwell, Brandon Campbell to Shima and JC Rowe, Killerboots boasts profiles from some of the most exciting skaters of the era at the top of their game. It’s bolstered by one of my favorite soundtracks in the sports history. Killerboots was my introduction to bands like Placebo, Fischerspooner, and Metric, which have gone on to become staples of my playlists over the years. Hell, even the intro song, a hilariously macabre track from The Greenskeepers based on the movie The Silence of The Lambs has become a go-to for my annual Halloween parties.

But much like everyone has their favorite episode of The Office, Stockwell’s section (and the secret section) are standouts. The way he carries himself on skates seems effortlessly punk rock yet has an artful manner with which he utilizes his trick vocabulary. Nobody can replicate Stockwell’s skating, much less someone of my admittedly middling talent, but his section in Killerboots never fails to motivate me to reach out of my comfort zone and try something different when I need a push.

It’s always hard to pin down one exact film that could be the most influential or just flat out favorite of mine. If I had to nail it down, one of my favorite go-to films is the 2008 The Regina Monologues edited by Dustin Werbeski. The Canadians come through once again with a perfect mix of fun, solid skating, and some memorable music tracks. Setting the scene with ‘White Chocolate’s’ super hot and super drunk bars, you almost know what you’re about to get into. With peak mid ‘00s clothing and hair styles in full effect, this video slipped into the evolving genre of “you don’t need to kill yourself to make a skate video” that was starting to surface in stark contrast from Killer Boots, Ego, Drip Drop, and many others at the time. Part of of my love for this time capsule is it always takes me back to some of my favorite years skating.

Skating is documented from all over Canada from 2006-2007. They even dip stateside to places like Pullman, WA and Moscow, ID where Richie Eisler pulls his hurricane top souls both ways on those super low red rails. The video tells a number of small but standout stories along it’s winding path like Devin and the family, them trying to skate a driveway bank, or Richie breaking his ankle. Each 5 minute segment of the video unfolds new fun, and more rad skating from folks who aren’t pro, aren’t always the most stylish, but have a damn good time on their skates.

The video wraps up with my 3 favorite profiles, starting with a banger peak Richie Eisler part featuring his standard ‘both ways, don’t care’ skating. A young Dustin Werbeski steps in next with a wild and not yet refined style, along with a selection of fantastic tricks for the locations they were filmed on. The video closes out how more films really should with b-rolls and reminds you once again why you love skating and being among your friends with nothing but the open road in front of you. Bonus to using The Smashing Pumpkins spin up ‘Tonight, Tonight’ as the ender song. The video leaves you with one final question which has stuck with me since that day. I’ve always been grateful to Dustin and the boys for making this classic while reminding me to stop, look around and ask ‘What is this life?’.

This video defines the truth of street knowledge. Showcasing a line up of the children of the G’s. That’s right, spoon fed by the Godparents of the sport. Street skating would not exist without this video. The people on the team, were putting in real work, on & off the skates. Very influential tricks, clothing styles, and a unforgettable soundtrack. It’s most def fringe af, so be aware of outlandish and bold antics through out the film. The intro scene has some weird stuffed dummy on fire in the Batman parody scene featuring Belz. Plus it’s got some behind the industry jizz jazz, wouldn’t be a Coburn film without it. Not rated PG!

A recent find for me, but an instant classic video from around 1997. It’s became my personal go to (FULL LENGTH) vids for the juice! It’s got quality street skating, cool tunes, decent adverts, and even some super sick vert! Oh yeah and a ton of SideWalk Grind variations, making this VHS a top notch recommendation!  A true hidden gem of skate films from the Golden Era of skating.

This skate film was decades ahead of itself. The eclectic talent of the line up combined with BJN’s unmatchable artistic view fossilized this vid in our roots. From the angles, to the soundtrack. Their attitudes were nothing to play with either. The tricks are to this day still being studied by the lifers. They really stepped up and took charge of the industry, by planting seeds in the mind of a few. All the while resetting all the standards.

Indeed an entire demographic inside our already small subculture within a subculture was born. This video eventually grabbed the attention of every rollerblader that was left around at those times. Love it or hate it, Road to Nowhere will be a video played time and time again for the next 100+ years!