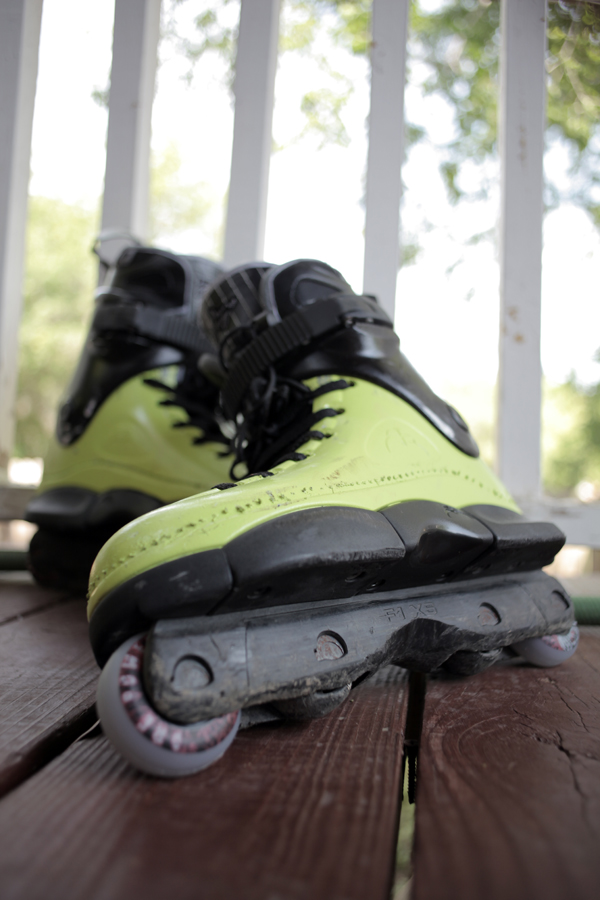 If you are living in Europe you most probably met Josh last year somewhere at one of the numerous events he visited. After the Winterclash 2011 he and his buddy Fritz Peitzner travelled all over the place for a couple of months to promote blading and have the time of their lives. After being back home in Texas for a bit he made it back to the Winterclash in 2012 and travelled to Sweden, Denmark, Belgium and France. While you are reading this he is already booking flights for his next visit in June. If you had the pleasure of hanging out with him you most probably had a great time as well, since Josh is pure positive energy. He is living life to the fullest and will do anything to make the people around him have just as much of a blast as he is.
After having him spent so much time on planes, trains, cars and buses we thought it’s time to check out his ride.

Why did I choose this setup:
I recently returned home from being home on tour and everybody in Dallas had the Dre’s. I was tired of looking at the same skate so i decided to pull the skin and make my own. I wanted a color that really grabbed people’s attention and something that was me… and well, Green is my favorite color! I’m going to be filming for a new Hedonskate add, so the timing was just perfect! I also wanted to show my support for my friends in Poland who support me and who do so much for our industry! If you don’t know, well now you know. Green is great!
I have been using the BHC wheels since i met Mathias Silhan last year on tour. He’s one of the most stylish bladers and someone that i look up too in the game. Supporting BHC means that I’m helping support him and the rest of the team! (Especially that geezer, Leon Humphres 😉 I met Mark from BHC last year in Poland for the Baltic games. Basically, Nils and i got into some trouble with the police. (o kuwva, polish vodka ….) After it was all said and done, i had been wearing the same clothes for 3 days. I had no luggage no money, no nothing, straight up gypsy Glow. I arrive at the apartment and Dre, Burston, Mark, and Fritz were shocked that I was still alive. Mark gave me some BHC gear to wear, Burston gave me a pair or sox and some jeans to rock, and Dre had a fatty Jay-Z on deck. Oh and since I’m thanking people for taking care of me after my incident … Big thanks to Ivan, he hooked it up with a one of the best tasting coffees of my life.. Freedom tasted great. Anyways BHC is dope.
Anything I plan to change on it soon:
I think i will change the GCs out and try out Julio’s new frame company see what they are all about.