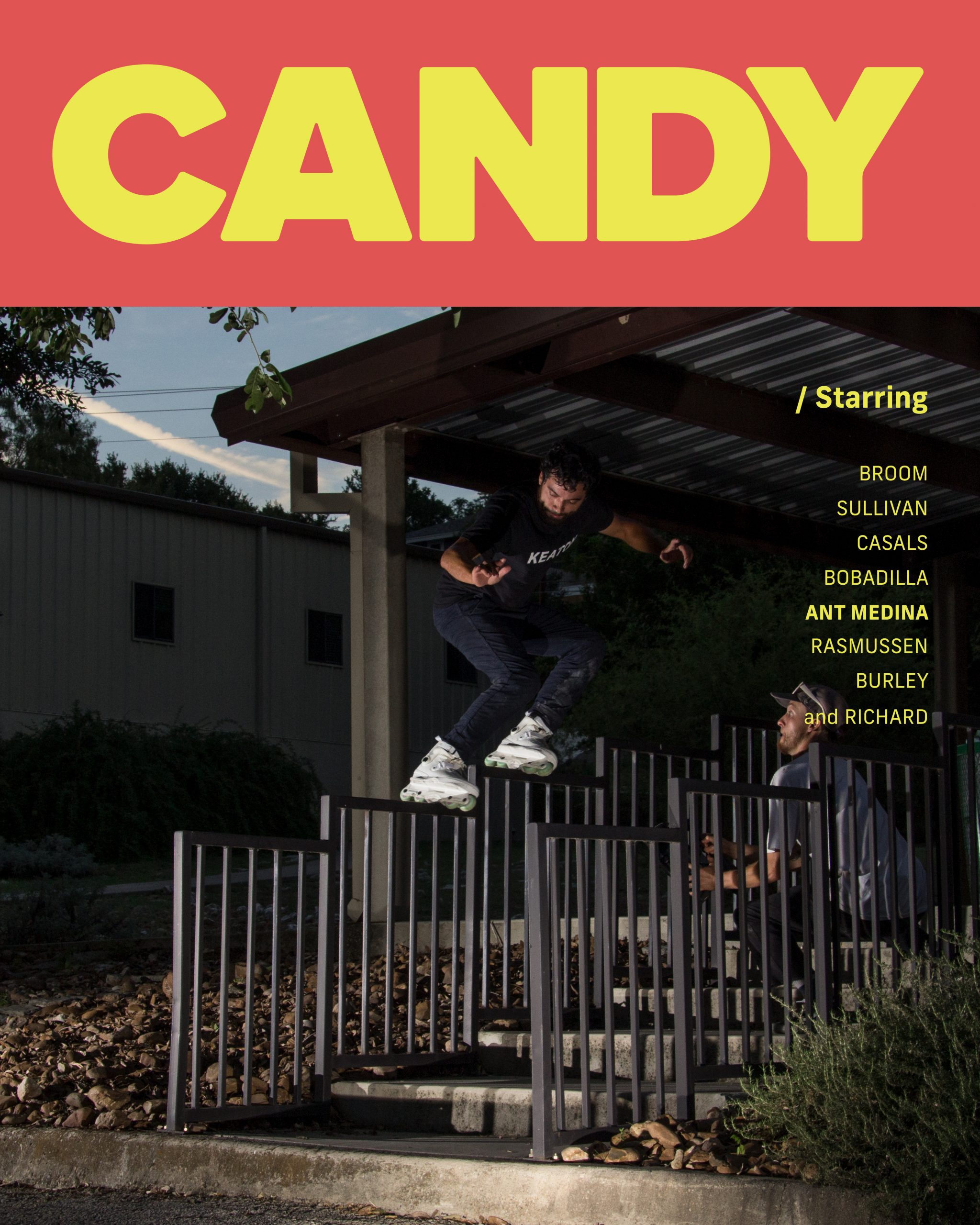 All right kids, who wants some Candy?!?

Anthony Medina‘s highly anticipated new video Candy is finally here and as expected it has lived up to all the hype and buildup that surrounded it over the last year or so. If you have been following the mind blowing amount of content released via the Candy social media pages than you knew you were in for a wild ride when the final product dropped.

The man behind Candy is none other than veteran videographer Anthony Medina, who has over two decades of blading videos under this belt with such classics as Names, Dag Days, Waterloo, and Local, as well as numerous online video releases which include contest reports and company promos. Since his first video release of Concealed Broadcast back in the VHS days of the late 90s, Ant has sharpened his skills with each new video release and become one of the most consistent and respected videographers in the game along the way.

Candy serves as an honor to our fallen brother, Keaton Newsom, so the cast of the video had a noticeable fire lit under them to deliver an epic production to make Keaton proud. The premiere of Candy was extra special as Keaton’s beloved Mom, Andra Maldovan, was in attendance for the screening as well as baby Keatynn, daughter of John Sullivan and Aarin Gates, who is named after Keaton.

Candy features full profiles on John Sullivan, Andrew Broom, Mick Casals, Brandon Bobadilla, Ryan Rasmussen, Heath Burley and the much anticipated return of Mason Richard. And let’s not forget that Anthony Medina himself steps out from behind the lens and shows that his skating skills are just as formidable as the rest of the crew.

Luckily I was in attendance for the limited screening of Candy and got to witness the historic event that had been delayed numerous times due to the Covid pandemic. After numerous venue cancellations and reschedules, the premiere was saved by the hospitality of our good friends Dylan Cobb and Ian Freunscht; who were nice enough to open their home for the screening. The video kicked off with an action packed intro section that got the juices flowing and got the crowd in attendance whipped up into a fury!

The first skater profiled was none other than Texas legend and style machine, John Sullivan. Sully has been consistently dropping fire content for the better part of two decades now and he still continues to progress and skate at an incredibly high level, even with the responsibilities of being a first time father. But Poppa John easily nailed down his best profile to date and set the bar enormously high for the rest of the crew with his jaw dropping, hammer filled section.

Next up was the man himself, Mr. Anthony Medina. Anthony might be best known for his remarkable filming and editing skills, but let us not forget that he has been a pioneer of Texas blading and can hold his own with the best of them on any given day. His section is filled to the brim with extremely tech moves done with a super mellow style. Further reinforcing the fact that Ant has been skating really, really well for a very long time and it is noticeable in his almost too chilled approach.

For the next featured skater we had none other than the redheaded beast himself, Heath Burley! Heath rolls with tons of speed, a very unique trick repertoire and tons of attitude to go along with it. Heath puts his body on the line several times on some nasty looking roofs with both equally terrible looking approaches and landings . If you have ever met Heath you know that he is a wild man with one of the most colorful personalities and also one of the biggest hearts in the world so seeing him put so much effort into making his section memorable was truly great to see.

Ryan Rasmussen is another individual that I feel is one of the most slept on individuals in all of blading. Ryan is a soft spoken and modest individual that holds himself very professionally but seems to really come alive when he skates. His profile is really fast paced and Ryan always seems to be fully committed to everything he attempts, which does have it’s downsides; as he takes some serious beatings in the filming process. One of the most memorable moments was in Ryan’s final trick for his profile. The location is an infamous Austin spot that has been looked at and passed up hundreds of times by local skaters and Ryan finally manned up and handled the trick like the boss that he is and etched his name into Texas blading history forever.

Mick Casals is a pillar in the Texas blading community and has always been one of the individuals to get the crew hyped for a big session with his effortless and matured style. One of Mick’s greatest skills is being able to find the unexpected trick in some of the unlikely of spots. His eye for spot selection and ability to lace the most mind bending of tricks with the seasoned style of a veteran makes his profile incredibly enjoyable to watch. If you could somehow splice the DNA of a prime Louie Zamora and a young Don Bambrick, you might come out with a mutant that somehow resembles the multi-talented Mick Casals. Yeah, I made that comparison damn it, and I am sticking to it!

You might have seen Brandon Bobadilla‘s recent “Up and Coming” profile featured here recently as Brandon is one of the most promising prospects in the blading game. The brash youngen had his work cut out for him in having to hold his own among a crew full of seasoned vets, but even though Brandon is on the B-Team, he brought his A-Game and smashed out one of the most impressive profiles in the whole video. Brandon’s trick vocab is filled with awkwardly positioned, super low negative tricks that would make any yoga instructor proud. Brandon doesn’t just have technical skills at his disposal, as he stomps his fair share of beefy gaps with equally treacherous landings that will make you wonder “What the hell were you thinking, dude?

Andrew Broom is the next featured skater in line and as many of you are aware, Andrew is one of the most naturally gifted skaters in the blade game. His skating blends an extremely technical precision in with an enviable confidence that allows him to do almost any trick that he sets his mind to. Must be nice, right? It is like Broomski turned on some cheat codes for unlimited control and he proceeded to kill the game while everyone else is struggling to make it out of the entry levels. Andrew is THAT good and it is honestly not fair.

One of the most talked about and anticipated profiles in Candy is none other than the prodigal son himself, Mr. Mason Richard. After years of being labeled as inevitable successor to the blade throne, Mason dipped out from the scene leaving many in the community scratching their heads as to the reasoning why. Well much to our excitement, Mason has returned and doesn’t look to have missed a beat in his downtime. He still has all of the tricks that made him a superstar at such a young age and somehow looks to be skating even better than ever despite his absence. From stunts, to lines, to gaps and transfers, Mason can literally do it all and with textbook perfect style to boot. Mason’s profile was everything that I had hoped for and more and it truly makes me hopeful that Mason sticks around this time because my heart can’t take another breaking.

All-in-all, Candy stands as a front-runner for “Blade Video of the Year” at the half-way point of 2020 and will likely be on repeat in my household for quite sometime. Seeing as Anthony Medina has stated in the past that Candy will serve as his last full length video production, Candy is a perfect swan song to a remarkable run for Anthony and a beautifully touching dedication to our fallen brother, Keaton Newsom. We know that Keaton’s positive energy and spirit filled these boy’s hearts and gave them the needed drive to push themselves past their own personal limits to complete this truly monumental blading production. We hope that the overwhelming amount of support and admiration for Candy will sway Ant into rethinking his early retirement, but if it doesn’t we just want to thank him for his years of dedication to his craft and for giving so many deserving skaters a spotlight to display their talents. Blading owes you a standing ovation for Candy and for your years of dedication to our culture.

This toast is to you, Ant. Thank you.