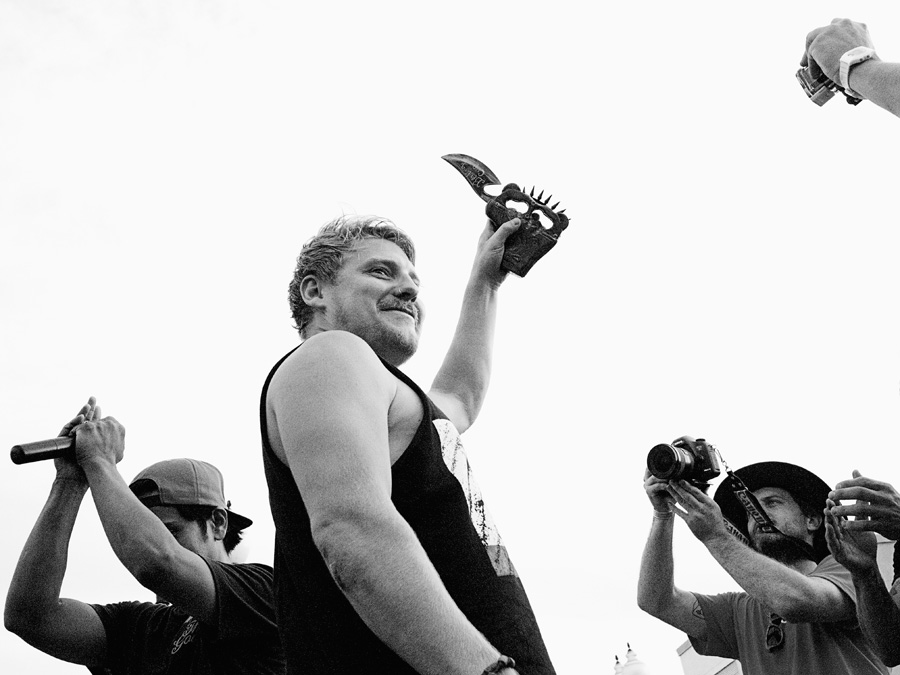 After capturing the NYC Street Invitational, Pietro flew to California to do the same at Jon Julios Blading Cup. Amazing pictures, along with his second letter from the US. Don’t miss out on that one!

I’m writing from the Red Roof Inn Motel in Santa Ana, its 2.20 a.m. over here and I just finished wrapping up the photo-story about the Blading Cup.

When I first landed at the John Wayne – yes, for real – airport of Santa Ana there were 29 degrees, sun and palms and a very chill feeling. That morning I had left New York with rain and fog and I couldn’t image a better welcome to California.

The next day I had a quick look at Los Angeles and the day after I went to the opening of the ThemGoods shop and then straight to the premiere of Strange Creatures new flick Vodoo Show.

The shop is very cool, there was some free food and something very similar to beer … it’s very hard to find beer in California and even when you find it, just forget about real beer. I mean, the closest thing to beer is a Corona, which is kind of kids beer, and its super expensive. But the food is way better than in New York, thanks to Mexico which is very close and got a strong influence on the culture in south Cali. Almost everyone that I met outside blading can speak English and Spanish.

Talking about beer, Dylan Davis had one, waiting to enter at the premiere, but since it’s illegal to drink outside and it’s also illegal to drink if you are underage ( you can drink at 21 in U.S.) he got a 100 bucks ticket from two cops on horses and was not allowed to enter the theater. Of course he found a way to enter from the back door and every blader gave some dollars for the cause and the amount of the bill was easily reached.

Vodoo Show is a really good video. Everyones blading is definitely good looking, the music is some good rock and roll and the Broskow profile has tricks never done before, such as hurricane fish-wall ride on a rail close to a wall and some totally creative stuff.

The video should be out in 3 weeks. At the ThemGoods shop Shred Till Your Dead 2 was also available with a book full of tour pictures that were also exhibited on the walls, I really would love to tell you something about that movie, but since Steve Jobs decided that people with mac books air are too cool for old stuff like DVD’s I haven’t seen anything yet.

The Blading Cup went down on a sunny day, the mood was very chilled and I had the good impression of being in the middle of a family meeting. Gavin Drum and Kevin Yee killed everything in the course in the Amateur comp and were allowed to compete in the Pro division later on. Farmer attempted some impossible tricks like alley oop negative makio on the steep curb but couldn’t land it and Stockwell was flying around the course and got in to the final. Along with Haffey, Bailey and Wellsmore who won, getting hyped after a full cab alley oop fish on the wall.

The people here are nice, and I like it here more than in New York. But I don’t think I would love to live here because the very big amount of money that you need if you want to attend an university or go to the hospital – I’ve heard something like 20.000 dollars to fix a broken arm – or having car accidents. Everyone here drives very safe and stops every time you drop from the sidewalk no matter the color of the traffic light.

On Wednesday morning I’ll get a haircut from Brandon Campbell himself and I’ll take some portraits of him.