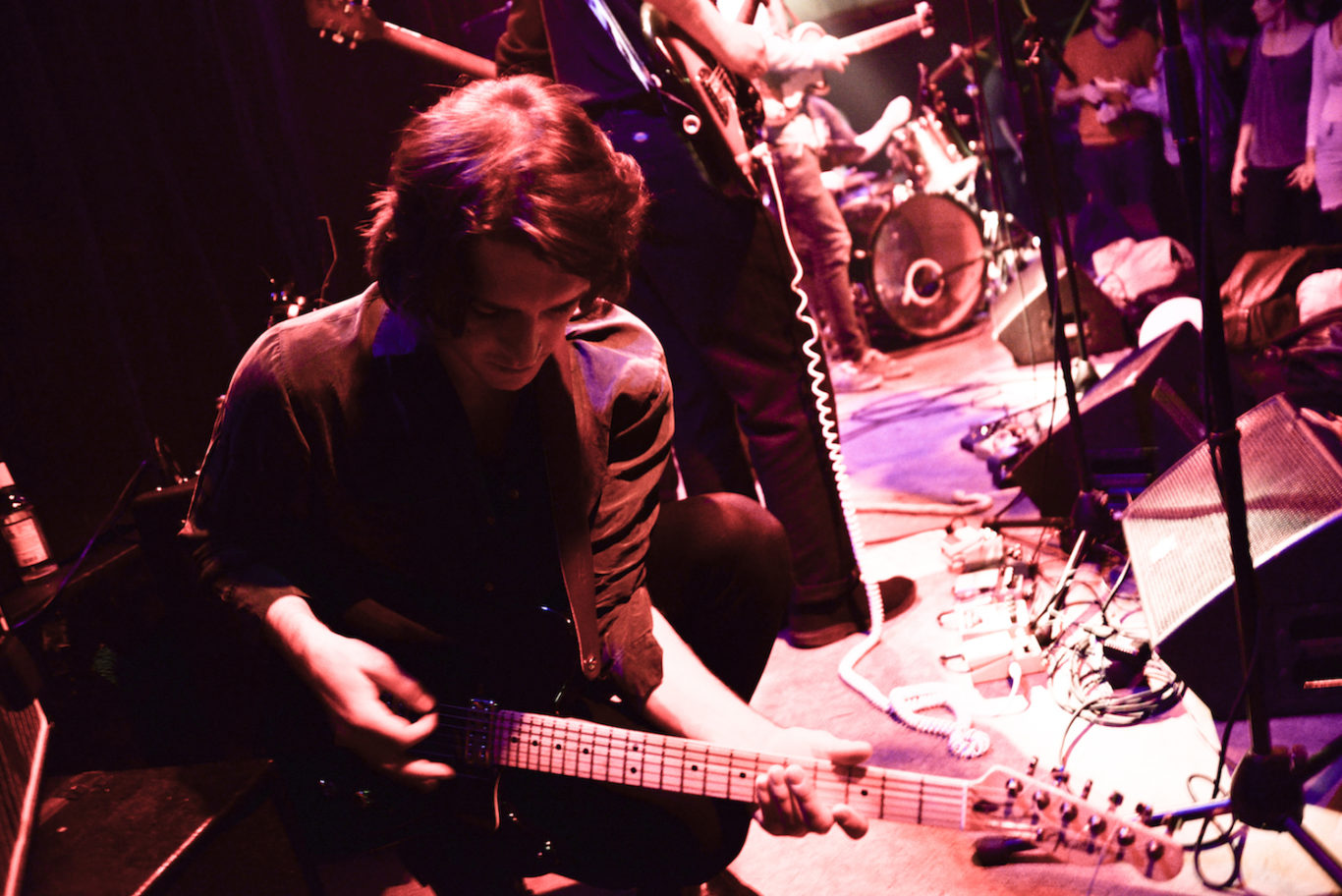 Checking in with Gabriel Hyden

Not only is Gabriel Hyden a professional videographer, but he is also a skilled photographer who recently took part in his first gallery exhibition, and an up-and-coming musician whose band Vague just got signed to a label after recording their first album.

And when his busy schedule and many obligations allow for some spare time, Gabriel is also one of Europe’s most praised street skaters ever, and represents the epitome of finesse and style for many, including his long list of sponsors.

While he has to deal with the harsh Austrian winter, Gabriel still came out strong with another fast and powerful section, which was released yesterday and also happens to be the fifth installment in SSM’s 666 online video series. So what does it take to film a full profile in the cold hard streets of Vienna during winter? We checked in with Gabriel to find that out! 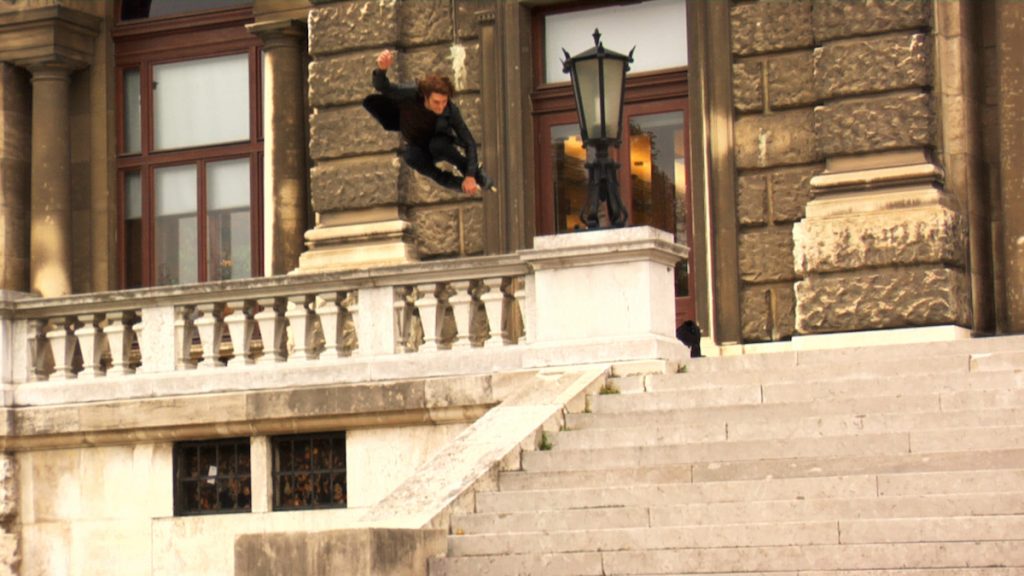 Hey there Gabriel, can you share some insight on the process of filming for your 666 section?
Should I be honest? Actually it was pretty much a disaster. I went to Spain earlier this year to get some stuff done but apparently the filmer I went with lost his skates on the very first day of filming and nobody was in town, so the mood was fucked up. We didn’t get what we wanted and ended up with one clip. So we decided to film it all in Vienna. We also decided to go with the Sony FS700 to make a serious statement. So I waited, waited, waited… Nothing happened. There was just too much work to do for my filmer, and for me as well. At one point I had to say: “fuck it, I gotta go film with my HVX”, but then the next problem appeared: I had a camera but no filmer around, no one to skate proper street with without getting anyone bored. That was until the beginning of October when Stefan Paul finally moved here. So we started of, but it was a constant struggle with getting weather conditions that allow skating and all… Now beeing all into street skating again I wish I would have had 2 more months to push it to another level. But you know, deadlines… Also playing in a band doesn’t really allow me to skate too hard a week before the gigs because of injuries. But, that’s life right?

Was there any additional pressure due to the fact that previous sections from your teammates all hit really hard?
Of course man, we are talking about the First Blood, I shouldn´t even be in there! But what’s pressure? I´m risking my health for Shima, cause he´s my hero, but in the end I´m doing it for free right? I don´t even want to see money for the section if I´m for real. I´d love to give it away for free. That might be the only pressure. But if anyone likes it it’s cool. I´m sure if you put the sections one after each other you´ll get a perfect idea of what Shima was after. We are a team, and as a team we understand that not everbody can be up to the craziest stuff at all times.

Did you have anything specific planned, like spots you had in mind, or places you wanted to go to film for this part?
Oh man, I would have loved to go everywhere to film, I never really skated Cali, I haven´t been on a serious tour since 2008 or so… It’s depressing being a rollerblader, all you can do is get on a paid plane to a FISE contest and back home… If you´re lucky. And you want to keep your apartment and pay your bills… Damn I should stop listening to Ty Segall right now, dude pushes the anger haha! But for real, if the industry allowed us to actually live somewhere for a while to get stuff done, easy tiger. I´ve been skating on constant 6-10 degrees the last month. And it gets dark at 3:30pm, I mean, fuck that.

How hard was it to have a deadline set in December when you are living in Austria and not sunny California?
Well like I said it should have been easily possible, but we just didn’t really plan it right. I can’t say to my filmer “dude, fuck your 2000 Euro job at your place, come and film me for free, oh yeah, and the gasoline is on you as well”. He was my only option for the summer but life´s a bitch sometimes. But to get back to your question, it was really fucking cold, I had several slaps from the cold ground and my frame broke just because it was too cold to skate. That’s where I knew it wasn’t too good of an idea to keep going, because an ankle or wrist can be off like that plastic as well. 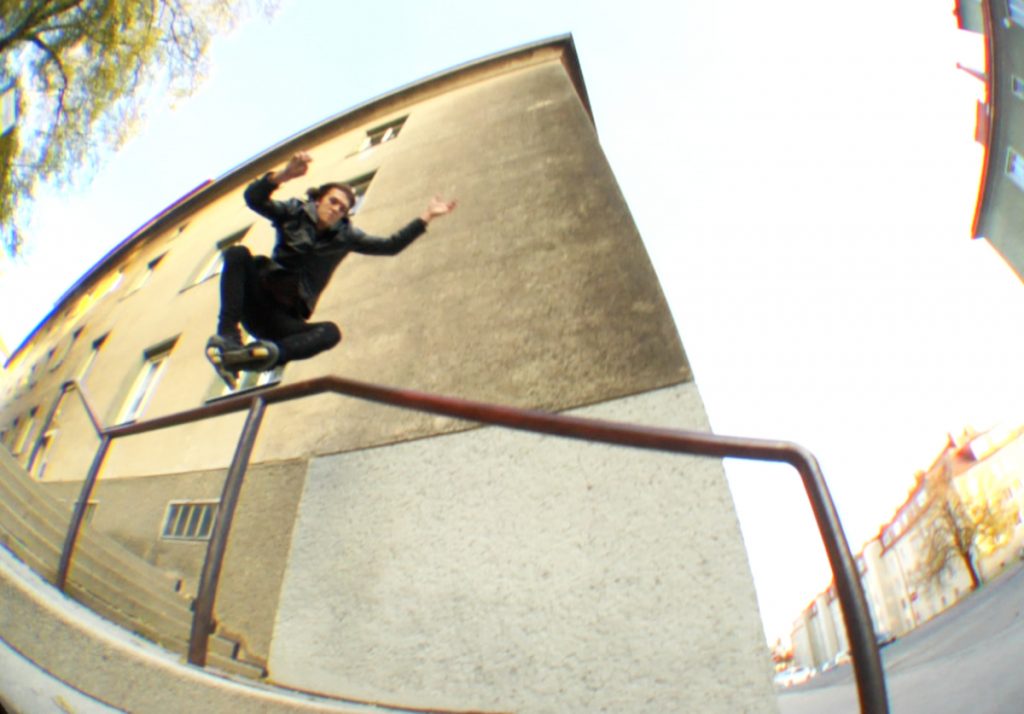 What is it like skating in Vienna, and how is your connection to the scene there?
I love the city to skate it, there´s this crazy shit you know? I like that. It’s just since Fridolin moved away there’s no one to skate it with. But the people are all nice and chill, most likely I´d go with Flo and Stefan Paul. Can´t wait for next year now that there’s new faces in town that dig the real thing.

Are you happy how the full thing turned out or is there anything you would have wanted different, more time maybe?
I would have loved to have plenty more time. There’s so many spots left that have to be done. So I’m not too happy with it, but at least it’s stylish, well filmed and fast. No slowmo. I could easily extend it to 5 minutes with bullshit curb tapping, super slowmos and shots you don’t need. But I think a skate section sometimes doesn’t have to be so packed with fillers just to make it longer. Also I had to save my skates and wheels since I´ve been on four different wheels, 2 different frames and a pretty much fucked up pair of skates right now.

What was the hardest trick to get on camera, and why? And which would be your favorite in this section?
Maybe that backslide on a drop downledge, it just felt so Feinbergish. Shuffling to the other side and stuff…

What’s the craziest story or coolest memory that you gathered in the process of filming this part?
Getting myself under pressure I guess. I just love that feeling of not warming up and totally being thrown to a disaster rail for example, running up, getting it… Go on. Feels just great. Also beeing around on the moped with Stefan Paul, it was like pirates seeking for gold. 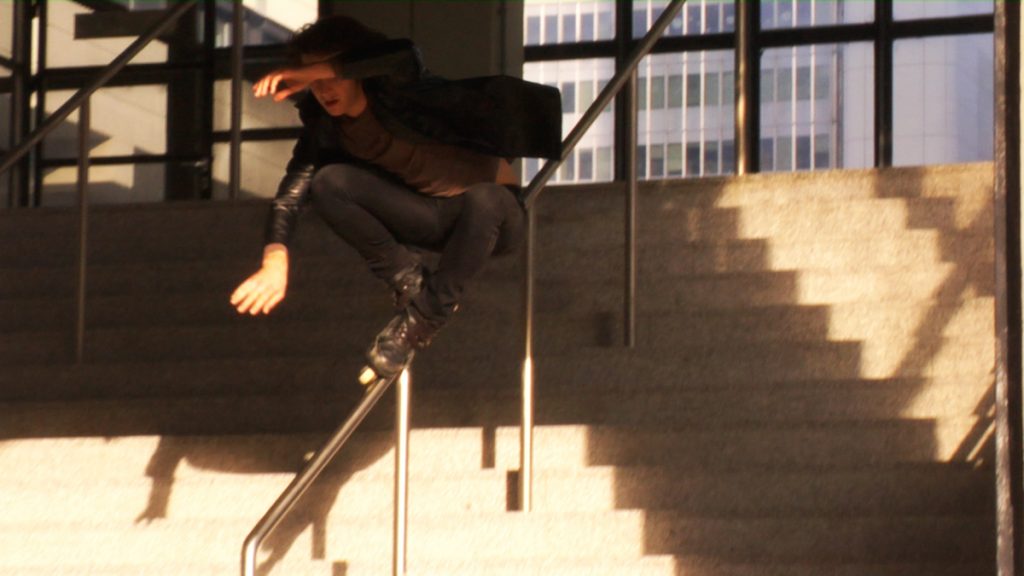 Besides blading, you are a pretty busy man playing music and shooting photographs, was it hard to make everything fit in your schedule?
This year was a serious rush. I produced lots of short films und music videos, trying to keep my company running. I had a photo exhibition lately, recorded an album with my band that just got signed to a label, playing concerts, trying to be there for my girl as well and yeah… Skating, although without a camera. Pressure´s on me, but I like it.

Who did you film with for this section? You’re pretty skilled behind a camera, was it hard for you to let someone else in charge of the filming itself?
That’s pretty much the reason I didn’t want to go film after all… But people get there now! Flo and Stefan are really good at it already, so at least the last month I could go out and not worry about that aspect. Of course, knowing my tricks, I´ll tell them from where they look best, what kinda zooming would fit etc. But they did it just right.

And now that this is done, what are you gonna be working on next? Anything blade related, or will you focus more on arts, and playing music with your band Vague?
Now that this thing is out, I will go straight to skating and filming for the next section. So hyped right now. Just gotta wait a little for better weather. Also we are going on tour with the band through Germany and England. There’s also some film work that has to be done, gotta make some money somehow!

Along with other young photographers, you recently were featured for the first time in a gallery. How did that happen, and how was the exhibition? Any new projects like this in the future?
Well photography is just a passion. They had an open call for young photographers all over Europe and a friend of mine just asked me if I wanted to take part. And they did choose my work to be shown alongside works of people from all over Europe which was great. We had great conversations about photography and such.

Well, congratulations for that, as well as getting signed on a label with Vague and finishing up this section against all odds! Shout out, thank you’s, all that jazz?
I would like to thank Mom, Dad and everyone else! Thank you!