Checking in with Jeph Howard

Jeph Howard has been around blading for a long time now and next to a bunch of memorable video parts, packed with big stunts, he achieved something that only a very few in our sport were skilled and fortunate enough to do; he won an IMYTA with one of the most insane tricks on a kink rail in history. That was back in 2004 and since then his outlook on things has drastically changed, caused by recent and not so recent events. This week he is turning 30 years old and to celebrate that and his new found joy in skating he will be releasing a new edit which in his opinion could be the best he has ever produced. Let’s take a closer look… 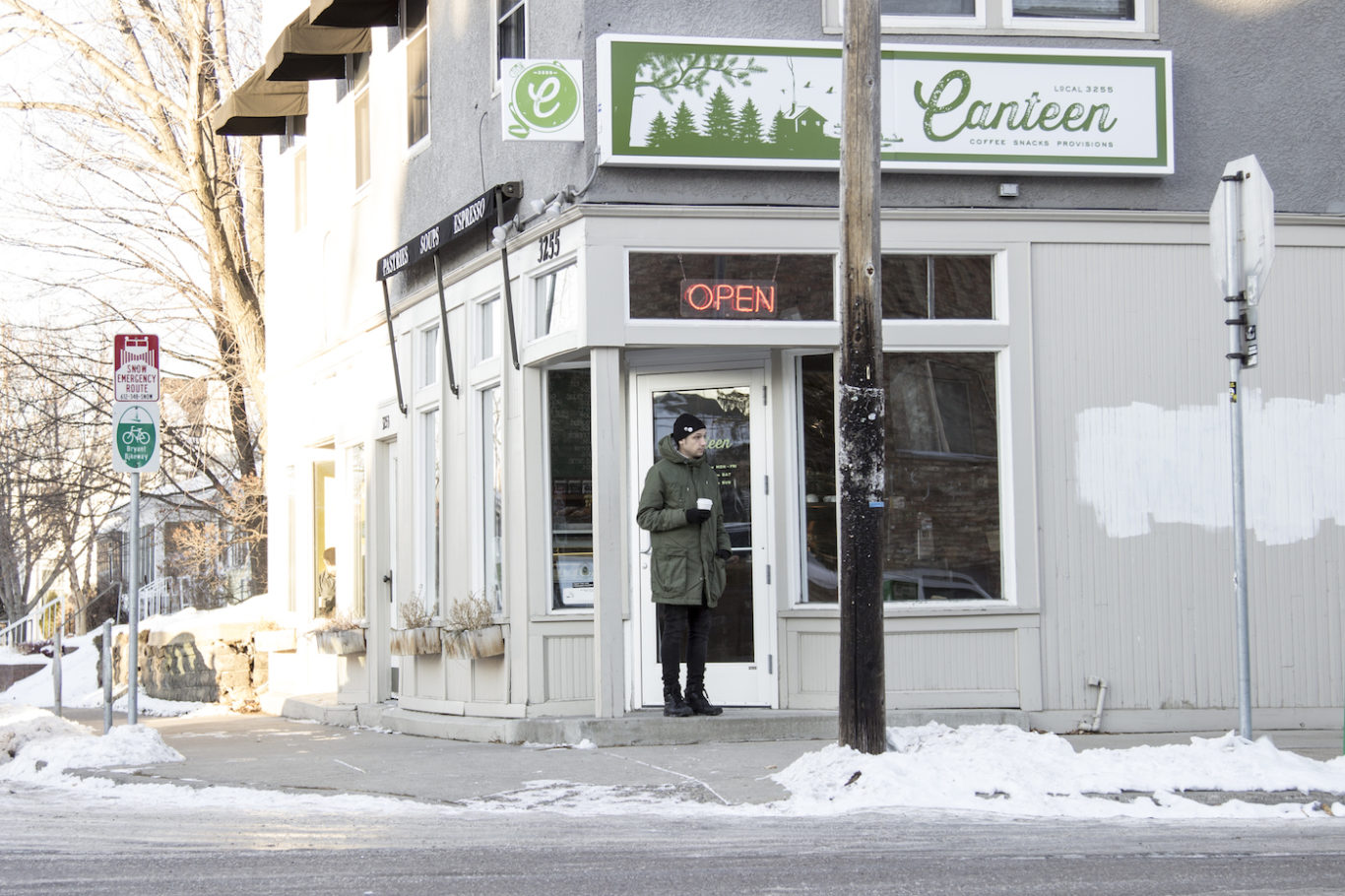 Hey Jeph, thanks for doing this with us. Where are you right now and what did you do before answering my questions?
I am just chillin at my house at the moment. Before this I was out to lunch with some homies.

You recently got quite active behind the camera with the Razors Tapes. Is filming and editing something you were always interested in, or did it start just now?
Editing kinda was my thing in the past but never really focused on it. Filming on the other hand I have always loved. Always tried to help out with second angles and input as much as possible. Never had a camera though. The past couple years though I started getting better with my money and I decided to buy one to help film with my buddy Cody Nehiba and Isiah England for Up and at’em. That really motivated me to focus actually on filming the way I want too and actually learn how to set up and use a camera. I now am so picky when it comes to filming that when I didn’t film something right and the skater doesn’t notice it that’s all I will focus on in the clip every time I see it. Editing on the other had is whole other thing. I don’t think you can ever stop learning with this stuff. I watch a lot of tutorials and read as much into it as I can. Definitely need to learn a lot more that’s for sure. Haven’t really found which program I like best either.

Your newest profile is almost ready and dropping at your birthday, how long did you work for it in total and who helped you with the filming?
I started the moment I finished up on the Razors Tapes Minnesota Chapter. So I only worked on it for two months at most but I was out skating almost every single day. Whether it be at the park or actually out in the streets. I had my main homies Black Cohen and Shane McClay film every clip. We all skate a lot together and Cohen knows what he is doing with a cam and I have been showing Shane everything I learn. Working with a VX really is an art. Getting everything to look crispy and remember every setting can get tricky. Especially with the MK1. We have been having with it all though. 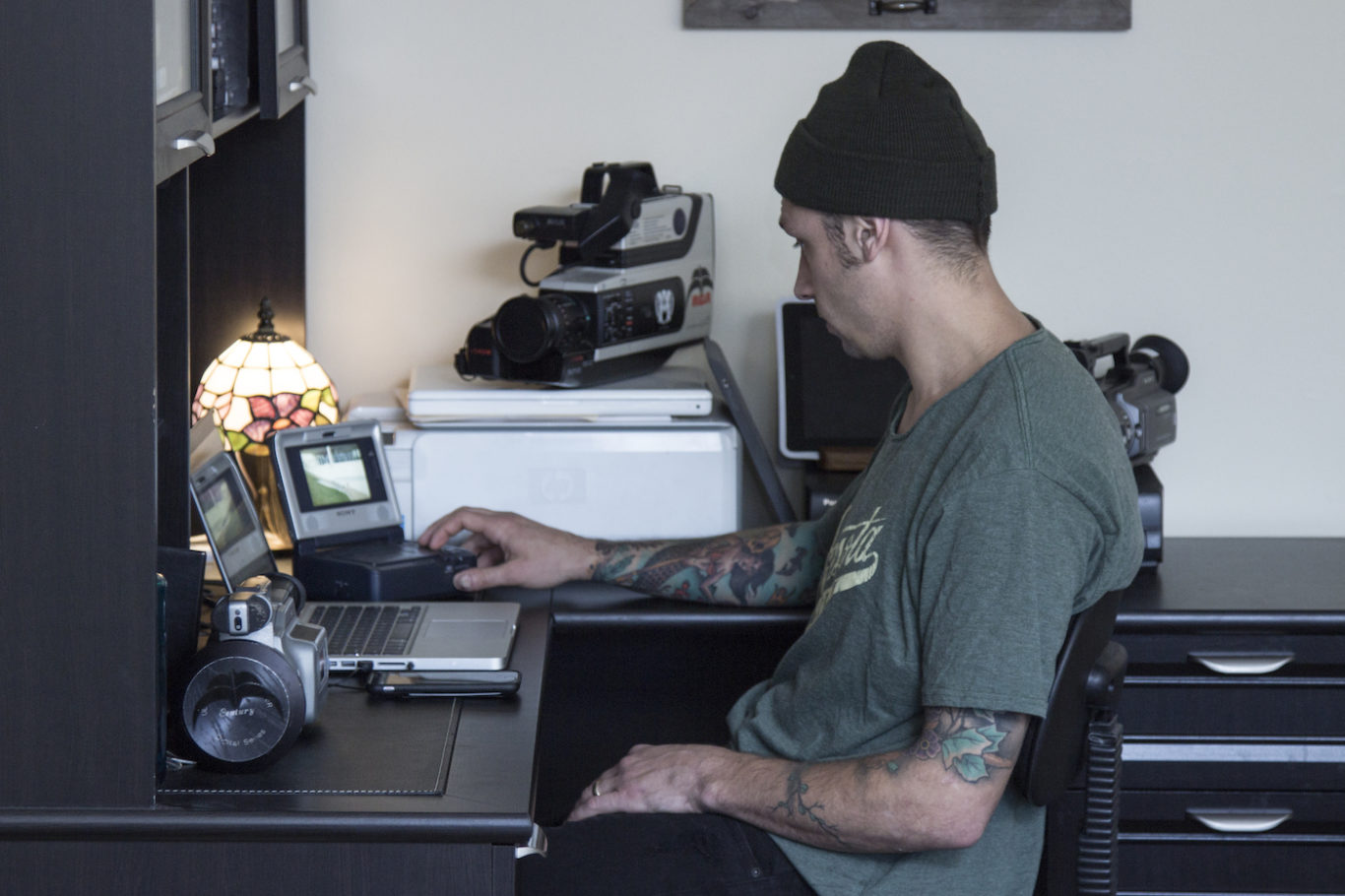 When you started filming, did you set up a list of tricks and spots you had in mind, or is it all about cruising the town and checking for things to do when you’re filming for a part?
I have always tried making list in the past but it never really worked out because I would tend to be lazy about it. This time I bought a journal and wrote down everything I saw I wanted to do. I was really focused this time around and made it a goal. Crossing things off a list is a great feeling. Not only would we go to something on the list but after that spot we would just cruise the area and find new spots. It worked out so well this time around.

What was the most difficult trick to get on tape and why?
There were definitely a couple physically hard ones and then there were a lot of mentally hard ones. I pushed myself in this profile more then I think I ever really have. I fish brain this bench to backside a curb and that might not look like the hardest trick but it probably was haha. The bench really isn’t even grindable but after much trial and much error I was able to stick it out. The makio on the ledge to hill gap at the end was a huge mental thing. Sticking the landing was hard yes but mentally dropping in on that cement was full commitment and that was not fun haha. The top soul hop top soul on the double kink. I smashed my ribs on that one awhile back and was out for a while. So going back to that was a huge mind fuck. I did it first try once hopping the kink which is why I was so hyped on it once I landed it.

Any funny or crazy stories that happened while filming?
The only thing funny or crazy about this profile is how everything we did and went to was too perfect. We never got kicked out. We never got harassed. Nothing went wrong ever. Definitely encountered some crazies otherwise people I think are just becoming more accepting to what we do. It’s really dope here in Minnesota. 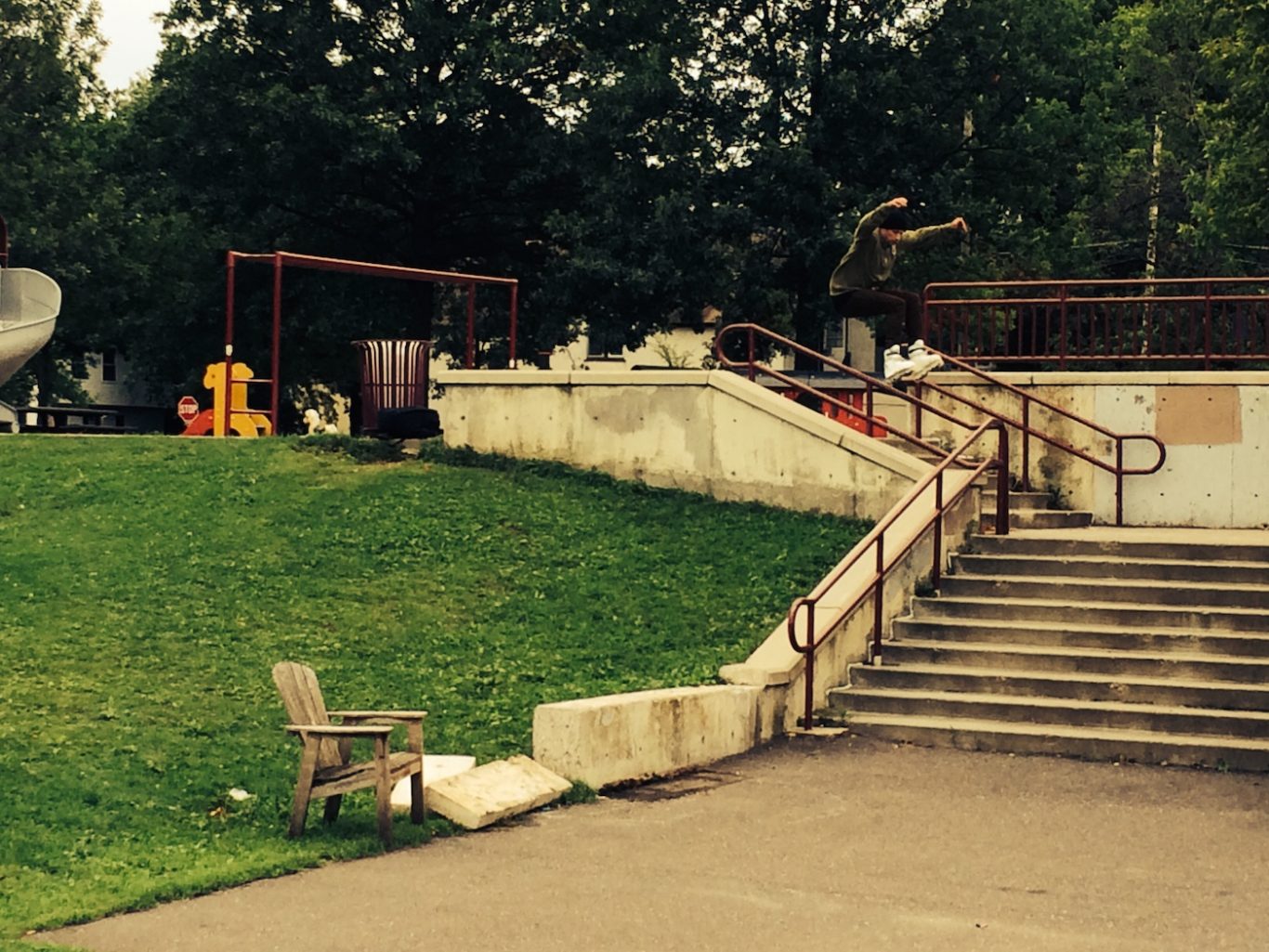 You are producing video parts since forever now, what was your first one ever and which one would be your favorite one until today?
My first one ever in an actual video was Echos by Dan Fabiano. There are copies floating around somewhere haha. My favorite up until now would be from like 5-6 years ago. Too Much Love 2. I really went hard for that one. I liked my style at the moment and it’s to one of my favorite songs ever.

Do you still enjoy filming for a part as you did in the past and do you watch them back?
This past year I don’t think I have enjoyed skating as much as I do now. Something really clicked in me and I almost found like a new love for blading. I have always loved skating but it’s like I almost found a whole new passion for it. Maybe it’s the filming part of it but I always like to be in front of the camera even more. Mentally and physically I am on something else.

There was a time when you weren’t as active as now in blading. Is that just a feeling or am I right with it – and if so, why did you step back for a bit?
I am glad a question like this came up. I definitely was less focused and kind of thought to highly of myself. I thought I was above people and kinda treated life as a joke. Mostly all of this was because of alcohol. Alcoholism is something I struggle with very deeply. It made me someone I am not and gave me the confidence to be a piece of shit. A lot of people in rollerblading have definitely seen me shit faced passed out or being a drunken idiot somewhere. I couldn’t pick up a drink without blacking and or taking drugs. It held me back a lot. I ruined almost every single skate trip I was on because I would go on a bender or just start drinking to early. I have been working on being sober since Dec. 28 of 2013. I have hit a few bumps in the road but I have realized this is something I need to take very very serious. It’s something I have to deal with every day. I go to AA and a treatment center 3-4 days a week. Sometimes I don’t even feel like that’s enough. So this past year learning to become sober I have found a new love for skating and life and general. So to answer your question, yes I was away. In more ways then one. Probably sometime before my skate came out is when it really went south I just wanted to party. I remember actually saying that. It just dug me into a huge hole and nothing in my life got better. This profile I am about to drop is more then just skating for me. It is a new out look on life and really who I am as a person and the blader I want to be. 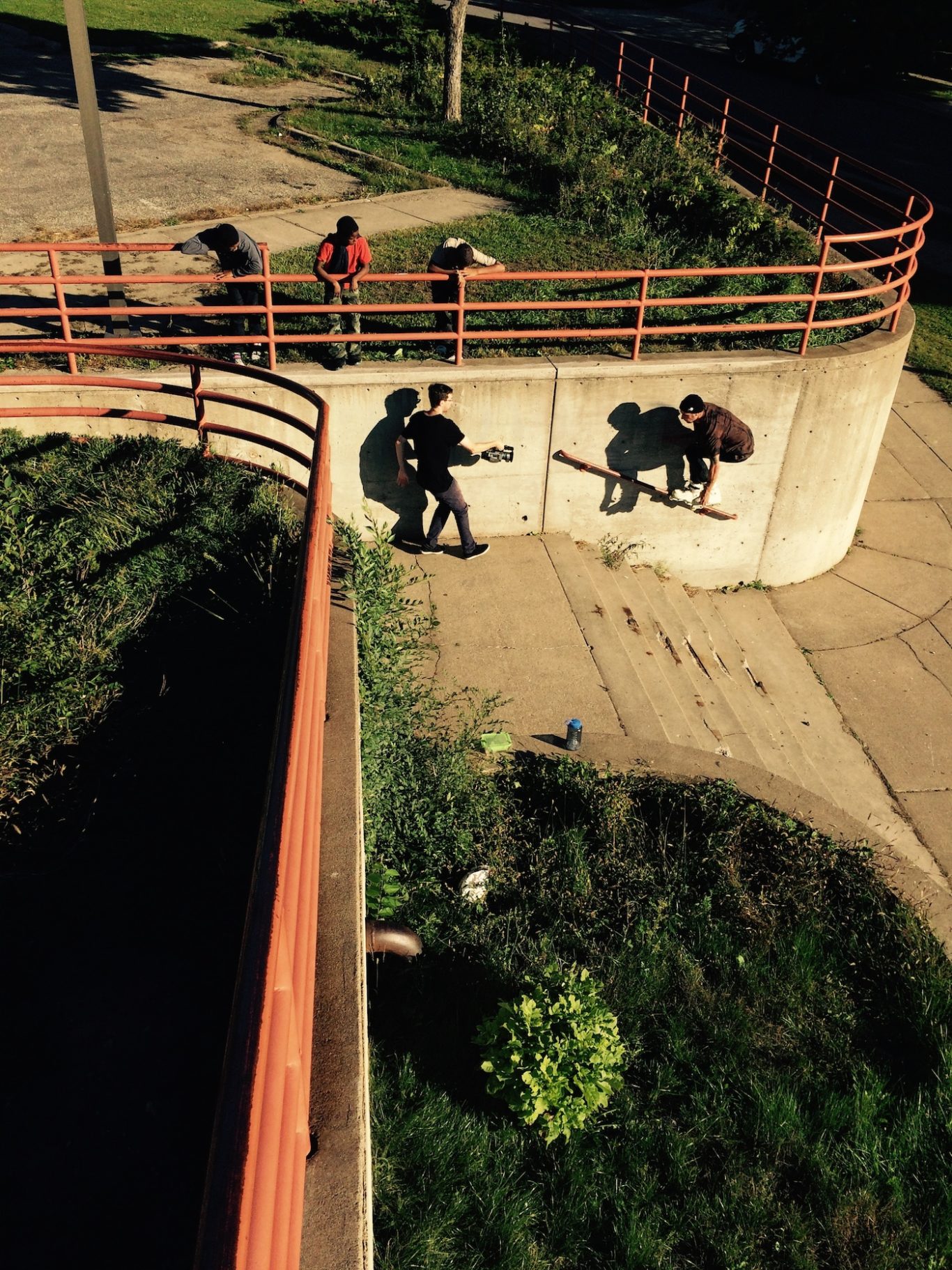 Is there a time of your “career” in blading that you consider as the best time and if so, why is that?
It’s right now. I have never felt more in shape and more focused. My changes in life really have made blading become a new thing to me. I can’t wait to start filming for a new project already.

You got married earlier this year, congrats on that man! How did that effect your outlook on life and did it affect your blading in any way?
Getting married was the greatest thing that has ever happened to me. Not only has my wife been there for me for everything that I have been going through but she is such an amazing person. It effected my life in so many ways. Getting married only brought more motivation towards skating. Showed me that life only gets better. Sure things will happen along the way but with someone by your side and as a team there is a solution. Getting married didn’t effect blading one bit what so ever. If people say life got in the way of skating then either they are just not motivated or lazy. I work 5 days a week. She does as well, I have treatment, I need to spend time with my wife, plus anything else life throws your way. I find time to blade. Almost every day pretty much. It helps not partying and going out and have a very supportive wife as well haha.

It’s already super cold in Minneapolis, did you ever think of moving away or are you fine with long winters?
I was alright with winter. I usually partied and we had a really awesome indoor park that was pretty much ours during the weekdays. But they closed down and not partying anymore I am already over winter. My wife really wants to move out to the pacific northwest so we have been talking a lot about that. Seattle and Portland are very similar to Minneapolis so that might be where we end up this up coming summer.

How is the end of your 2014 looking like and do you already have plans for 2015?
I think the rest of 2014 and this winter I am going to just be planning what to do as far as 2015. Living one day at a time really helps get things in order as far as planning the future. Definitely trying to get somewhere warm this winter. Would love to film and all tranny part in the big parks out west. Something I have been interested in for a while. Also more to come from Razors Tapes that’s for sure. Really trying to brand this movement Alex and I have been putting together. Some things are just in the talks right now but definitely expect more from us.

Thanks for the interview Jeph. Any shout outs?
Thanks to all my friends and family who really have been there for me this past year. It’s been a crazy journey and it’s only going to get better. Thanks Razors Skates, Kizer, Undercover, and Aggressive Mall for the constant support. Thanks Shane McClay and Blake Cohen especially for dealing with filming me try things more times then I needed too and always keeping me occupied this summer. Geoff Acers for being a really good homie and all the hard work we put into this profile coming out. Thanks to my wife Lauren for being there 100% through all this. 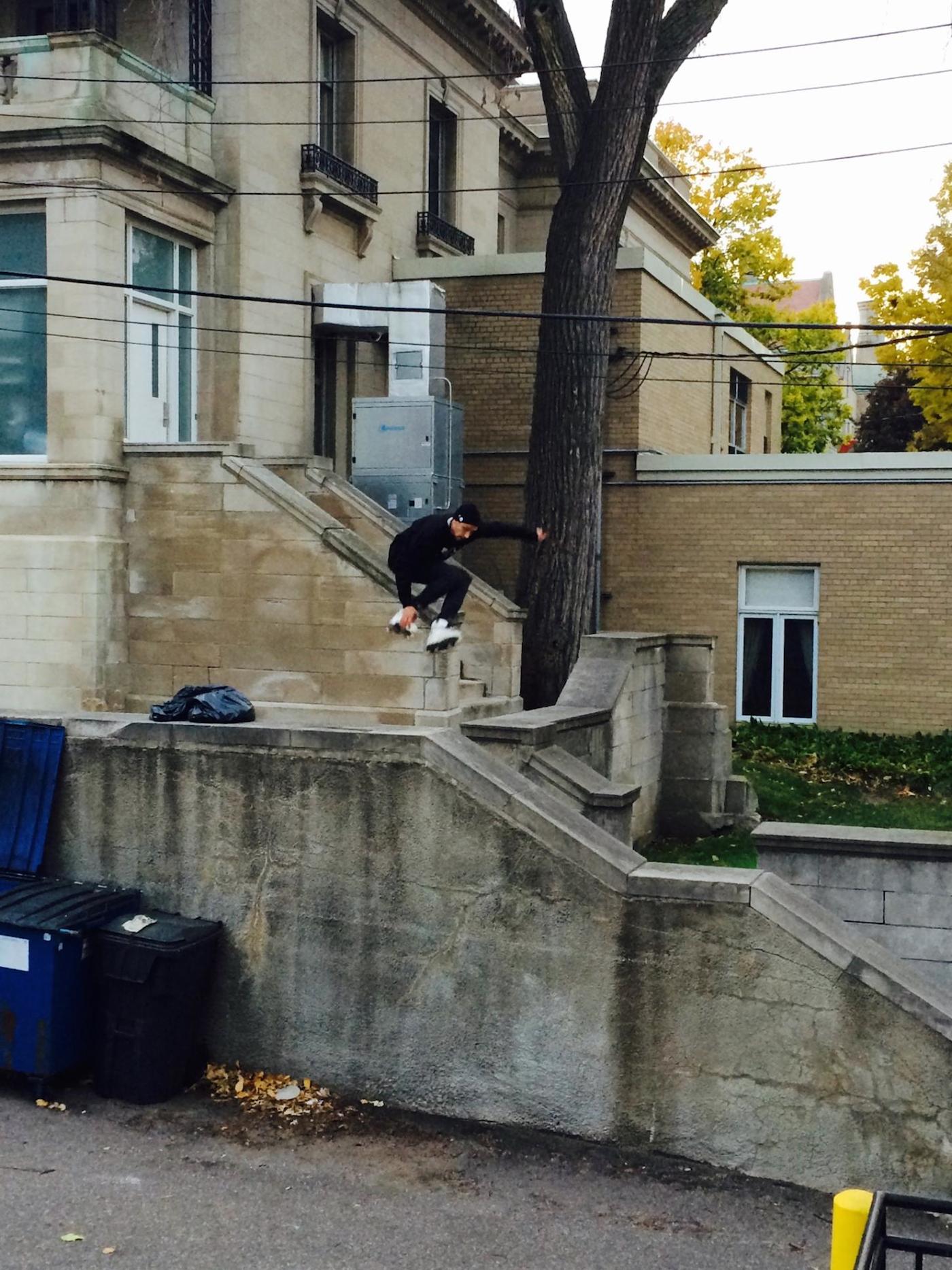 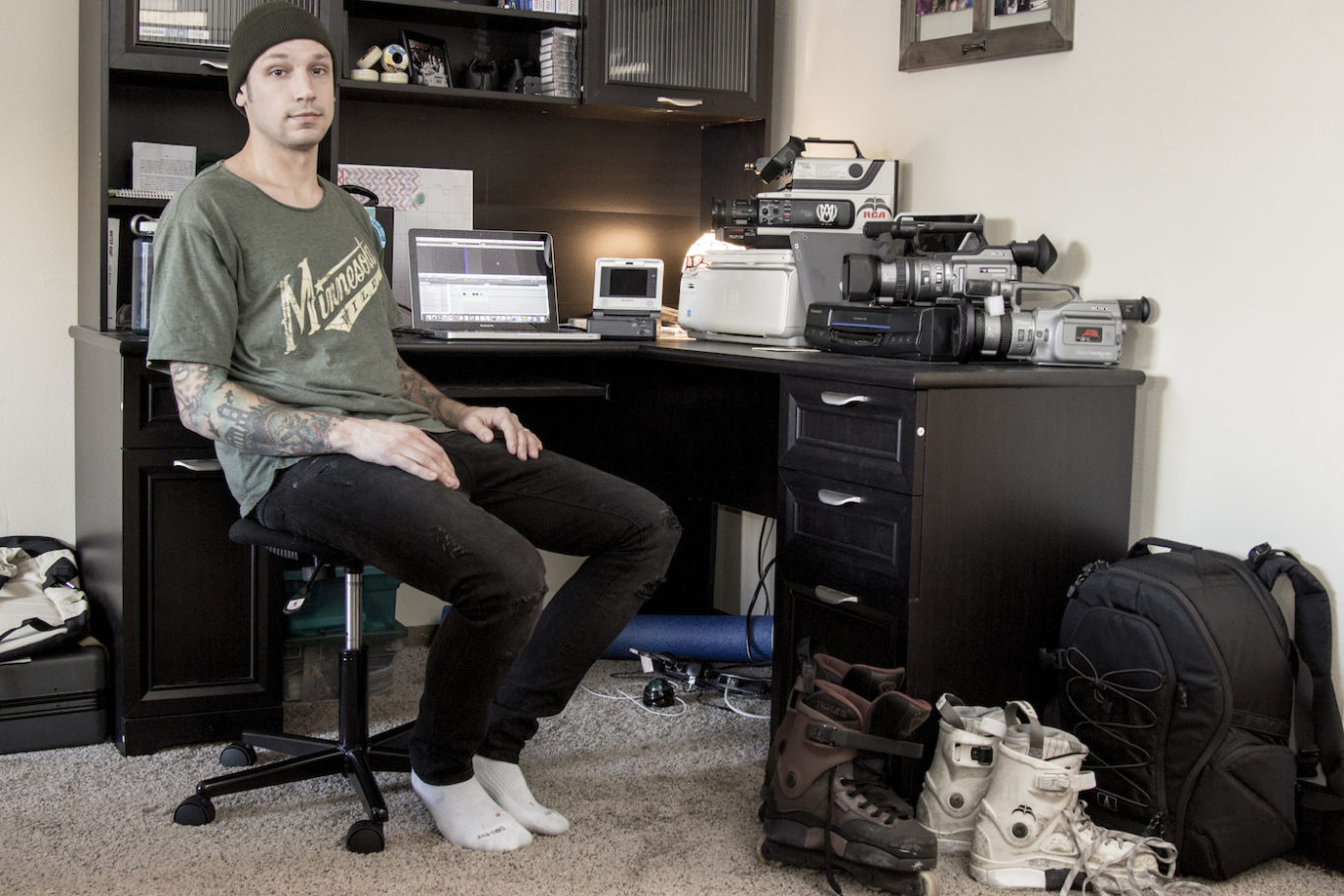