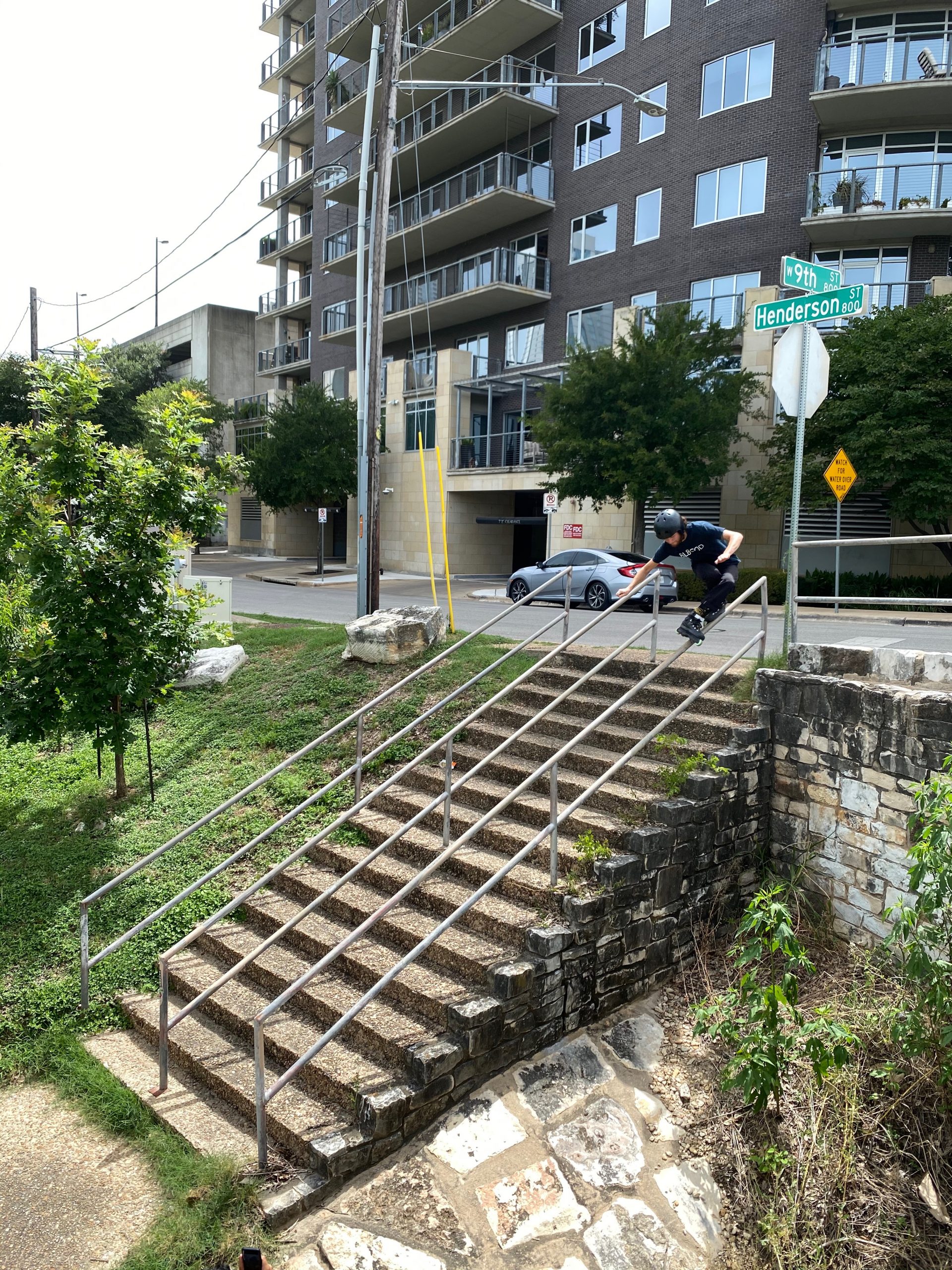 UP AND COMING | BRANDON BOBADILLA

The great state of Texas has a long and storied history within blading culture. From it’s early pioneers such as Arlo Eisenberg, Champion Baumstimler and Jason Howard to current heavy hitters such as Josh Glowicki and Andrew Broom, Texas is a breeding ground for amazing talent. But like most modern blade scenes, the younger skaters are few and far between. I remember the first time hearing of Brandon was probably six years ago, a mutual friend had mentioned a young skater named Brandon Bobadilla that was incredibly talented and a skater that I needed to keep an eye on.

Luckily I had met B.B shortly afterwards and struck up an instant connection with him. We ended up traveling together at the 19th annual Colorado Road Trip and I got to really appreciate his easy going and fun attitude and witness his mind boggling skating skills firsthand. Since then, Brandon has been steadily improving his skills and stacking footage for what will surely be a breakout section for him in Anthony Medina‘s swan song video, Candy, which is set to drop here in a couple of days.

I had the opportunity to speak with Brandon about how he got his start in blading, what he has been up to lately with the world in disarray and we get to know more about what makes this goofball tick.

Hey BB! Thanks for taking the time to speak with us. Just to start off, for the people who unfortunately don’t know you, who the hell are you and how did you end up addicted to this weird world of rollerblading?

You’re welcome Kevin. Thank you for thinking of me, I really appreciate the opportunity. My name is Brandon Bobadilla,  I’m 23 years old and I’ve been rollerblading for 11 years.

So this girl I was dating had an older brother who rollerbladed. He would put me on to all these videos, I thought it was the coolest shit. When he got new skates for his birthday he threw me his old pair, even when I wasn’t with his sister anymore. I just remember looking at those beat up pair of skates and being so stoked. Within a week I was hooked.

The skate scene in Austin has a vast history and has been home to many legendary skaters over the years. What is it about the city of Austin that makes it unique and so fun to live in?

I think the scene here is really unique. Everyone looks at a spot with a completely different perspective and has a different bag of tricks. It’s a great blading community with an eclectic set of styles. As for the city itself, it’s hard to describe. I think a lot of it comes from the counter culture that thrives in Austin. There’s a reason Austin has been the hub of rollerblading in Texas for so many years. You really just need to experience it yourself.

You’re the youngest member of your crew of friends and just like Mason Richard and Andrew Broom before you, you catch your fare share of shit talking from your older peers. Do you use that as motivation or do you secretly cry yourself to sleep alone in your van at night?

The Austin boys are fucking ruthless. I know it’s all fun and games but it absolutely fuels for me to make them eat their words. The only one crying is Andrew when I whooped his ass at the Donate & Skate comp.

Damn, shots fired! Haha Which leads to my next question, how did you end up with the sweet life as a vagabond living out of their van?

I always thought rent was ridiculously high, especially in a city like Austin. So the van life was always appealing to me. One day I was rear-ended and my car was totaled. I remember being really juiced about that. I took the insurance money and bought my Home on wheels.

How has the recent Covid pandemic affected you living out of the Shaggin’ Wagon? I’m sure it’s not made your living situation any easier.

Yeah, so I’m actually staying with my parents right now. Big thanks to my Mom and Dad. Typically I have a gym membership, solely for the use of the showers, but since locker rooms are still closed, I was getting pretty grimy before they took me in.

Do you feel that maybe affecting your dating prospects?

Okay, you keep your secrets haha So you have been filming with Anthony Medina and the crew for the upcoming release of Candy. Do you feel a lot of pressure to deliver being that you’re skating with so many seasoned veterans?

There might have been a little pressure during the filming of Local, the previous video, but I feel like the content I’ve put out proves that I’m beyond that point now. These are the kinds of opportunities I crave and I’m not going to let nerves get in the way.

Did you have any major injuries during the filming for “Candy“?

Even though I won that boxing match with Andrew he still got in some shots. Other than that, I’ve been staying healthy.

Mason Richard had been away from blading for awhile but has been skating with you guys a lot recently & even has a section in “Candy”. How did his presence affect the crew & the filming process for the video?

Yes, the anticipated return of Mason Richard. Personally, I was excited because I had never met him. At first he said he didn’t want any clips or a section in Candy; he made it clear he was just there to kick it and to do some soul grinds. He hadn’t realized the video was for Keaton (Newsom), so when he found out he had a change of heart.  He started bringing big tricks and big energy to every session. I think everyone thrived off of that and the video is that much better for it.

Okay now for a bit of a change of pace, I am going to just throw out some random ass words and I want to get the first thing that comes to your mind. Okay here goes:

Sorry that answer was embarrassing! haha

I mean he has his moments! Haha Okay next one…style:

I actually don’t know. I just wanna keep skating and drinking beers with the boys. “The Future”….I’ll cross that bridge when it comes.

Great answer, my friend. Well Brandon, it is always a pleasure talking with you. Do you have anyone that you would like to shout out or thank?

Thank you to everyone that has supported Candy and me personally. Thanks again Kevin for this opportunity and cheers to the Candy crew.