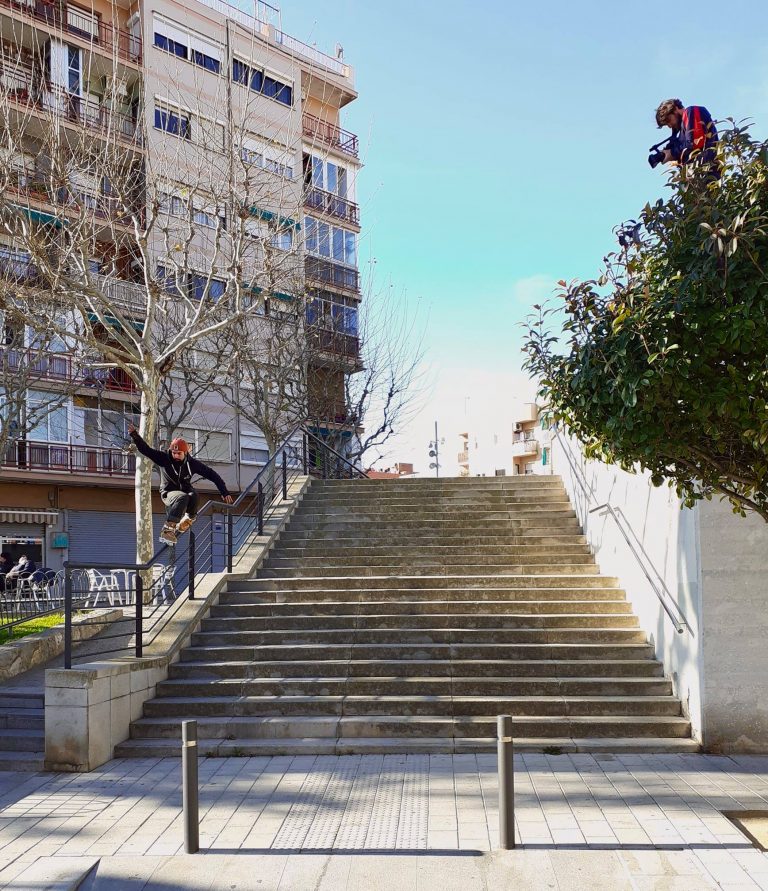 The Spanish stuntman Carlos Bernal has had quite the remarkable year in 2020, which showed him earn a signature model from his long time skate sponsor USD and also the release of arguably his greatest profile to date, titled City Fade, which was two hard years in the making.

Although there are many, many incredible skaters scattered throughout the world, Carlos is a rare breed of skater that seems to show the evolution of where skating is headed into the future. His high level of technicality matched with his penchant for death defying stunts all done with a textbook perfect execution makes him a clear example of what is possible if you are dedicated to perfecting your craft, as Carlos has.

We had the opportunity to speak with Carlos about the filming process behind City Fade, the strong Barcelona scene that he is immersed in and also the honor of being awarded his very first signature model from one of the most respected companies within the inline skating community. This is what Carlos had to say.

Kevin Little | Thanks so much for taking the time today to speak with us, Carlos. So to start, congratulations on your much-deserved pro skate from USD skates! It looks incredible by the way. With all the skate options that Powerslide has available at their disposal,  can you fill us in on why you chose that particular model  (Carbon Free) and why it fits your skating?

Carlos Bernal | Hello, first of all thank you for giving me the opportunity of another interview with you. Well at the time USD had decided to give me a pro skate I was skating Aeons and they were going very well but there were too many models on the market and I opted for Carbon Free since I have also skated them for a long time and on top of that they sell very well, so that is also important.

KL | I have seen many comparisons of your skate to the ’90s era Fila shoe models. Was that something that you used as a reference for your pro model skate or were you inspired by something completely different?

CB | Yes, the truth is that I was inspired by the Fila shoes, I spent a few days looking for different models on the net, as old as possible and I finally found that one and thanks to the good designers that Powerslide has, I captured it as I wanted it. 🙂

KL | The USD team has been home to so many legendary riders over the years, so it must feel extra special to be given a pro boot from them.  Out of all the amazing skaters that have rode for the USD brand, which rider has had the biggest impact on your skating personally?

CB | Of course I am very proud to have achieved a pro skate from USD, for me so far it is the best prize I have been able to get in skating. Of course one of my first great influences was Aaron Feinberg even though then I have had many others like Carlos Pianowski, Demetrious (George) and more recently Richie (Eisler) and Eugen (Enin), I love their original style of skating.

KL | You were one of the many bladers that helped to popularize the Spanish skate scene and draw attention to its absolutely breathtaking skating terrain. Aside from the incredible skating obstacles, what makes the scene in Barcelona so special?

CB | The truth is that there have always been great skaters in Barcelona, I have many local idols who motivated me to level up when I was little and it has always been a city often visited by people from outside because, as you said, its great obstacles that it offers. So thanks to that fact, the people from outside with a very good level have always come to skate and that there were many street competitions it always helps to motivate and level up since either you do that or you could not take advantage of such good places that we have.

KL | Your crew of friends are some of the most talented individuals in the blading game. Who is your usual crew of friends that you skate and film with regularly these days?

CB | To go out to record almost always I go out with Michel Prado, Sacha Lopez, Teles (Angel) , Yuri Botelho, Paco (Rey), Marbin, Richard Vazquez etc…with Marc Moreno we have been going out to record with him for a while, since he has a very good project in the hand and is always motivated to go out with his team Balas Perdidas to film and destroy the street.

KL | There are so many incredible up-and-coming skaters to come out of Spain. Who in particular do you feel is someone that the blading community need to keep an eye out for?

CB | As many of you here in Barcelona will know, there is a skater named Xavi Eguino, who a few years ago became known for his creativity and style and still has a lot to say so stay tuned.

KL | You have been skating at a very high level for many years and you consistently drop videos filled with pretty heavy stunts. What do you do to pump yourself up to throw yourself at such dangerous tricks?

CB | I like this question because when I was little I saw many tricks that I do now which seemed impossible and that I saw in VGs, Denial’s Underestimated, Hyphy etc … my motivation was always those kind of videos and that style of skating because that is what I grew up with and I admired until one day my level began to let me do those spots and I didn’t want to stop throwing myself at hammer tricks hahaha.

KL | Your skating at times can be literally death defying, does that fear ever get the best of you and you have to step back from a trick and reconsider it?

CB | The truth is that yes, more than once I have fallen behind with some spot or trick, some out of fear and others because of not seeing me with at that level or at the right moment with the necessary security to do that spot.

KL | Getting hurt is a part of skating that is unavoidable if you are skating at the high level that you are. What has been your worst injury so far in your skating career? I see you were rocking the helmet in several recent shots of you.

CB | I have been very lucky with the injuries and I have had few serious ones, such as sprains that I have suffered all over my body hahaha but very few breaks, a year and a half ago I had to have surgery on my wrist for a broken radius and for a ligament that I already had from being broken before, then some bone in the hand and that’s it. Wearing a helmet in some tricks was a time of insecurity due to unpleasant accidents of close friends and it made me feel insecure in myself, it helped me to continue pulling tricks on the street.

KL | So just to touch on your new VOD that you released with the talented Teles Angel called City Fade, can you give us a little more info on how long you both have been filming this VOD for and some of the difficulties that you faced in filming this project during the middle of the pandemic?

CB | City Fade has been a very long project since I have had other projects involved such as my pro skate promo and a couple of injuries apart from the fact that I got the wrist operation in the middle, it took me 2 years to record this VOD. Some of the tricks came quickly and others seemed impossible to get hahaha. We would have to come back two or even three times to do it, but thanks to the enthusiasm of Teles Angel we were able to continue pulling tricks until we saw that it was enough to make a good video. And that all the parts of the video they were already finished, as Teles already had everything thought out almost from the beginning. I knew that it would be a part with a specific song, another part at night and the final explosive part with another song. But I will say that the night part cost me a lot even that it seems easier compared to other tricks but I had never skated with an LED spotlight and it is difficult for me. It was difficult to get used to as it dazzles a lot and is not easy at all, I also look for technical tricks that I don’t usually do to add one more level of difficulty to the matter hahaha.

KL | You have so many incredible tricks within City Fade, was there one that was especially difficult for you or one trick that you were really proud of? You should be proud of all of them but is there one that stood out to you?

CB | Tricks that cost me the most, as I have told you in the previous question, a couple of those that I do at night cost me a lot, the roll to darkside alley oop top porn and the true farf to topsoul to the inclined plane. And as you said I am proud of each trick that appears in this video but I think the trick that I am most proud of is the fakie backflip following 270 topsoul on the downhill rail, for a long time I wanted to do backflip on the street and follow it around, now I don’t think I’ve seen it and I wanted to do something original.

KL | We know you quite well for your incredible skating skills but what other activities or interests do you have to help you relieve stress and unwind?  What is a normal day like for you?

CB | The truth is that my day to day apart from skating is always full of other sports to try to never suffer from stress or anxiety, I do a lot of physical exercise at home and stretching to keep fit but I also like to go out for a walk in the mountains, go surfing, go for a bike ride , basically everything involving sports I like hahaha. Then apart from all that, I spend a lot of time with my girl, go out in our camper van that I have for more than two years which we have taken on many trips, it is an incredible experience 🙂

KL | With the Covid-19 pandemic looking to be slowing down in some areas and travel restrictions being lifted, if you had the opportunity to go out and shoot a new profile right now anywhere in the world, where would you like to go? And who would you bring to document the madness?

CB | I have it very clear where I would go, to Japan! I love the spots they have there, the country looks incredible and I would go with all my friends, to skate and record as much as possible.

KL | Awesome! Hopefully you make it to Japan one of these days! haha Well Carlos, thank you so much for your time and for answering these questions for us. Is there anyone that you would like to thank for their help and support?

CB | I want to thank all my friends who always support me a lot, my girlfriend, my family and of course thank you for this interview, it is always a pleasure.

City Fade is now available so be sure to show your support for all of Carlos & Teles’ hard work & buy it today! Hit the Sellfy link or picture below!