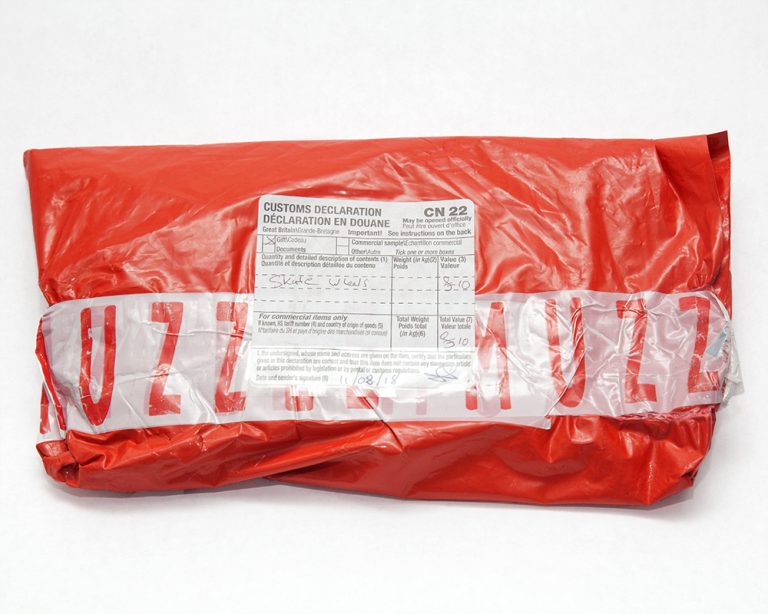 A TALK WITH SAM CURRIE REGARDING HIS NEWEST ENDEAVOR 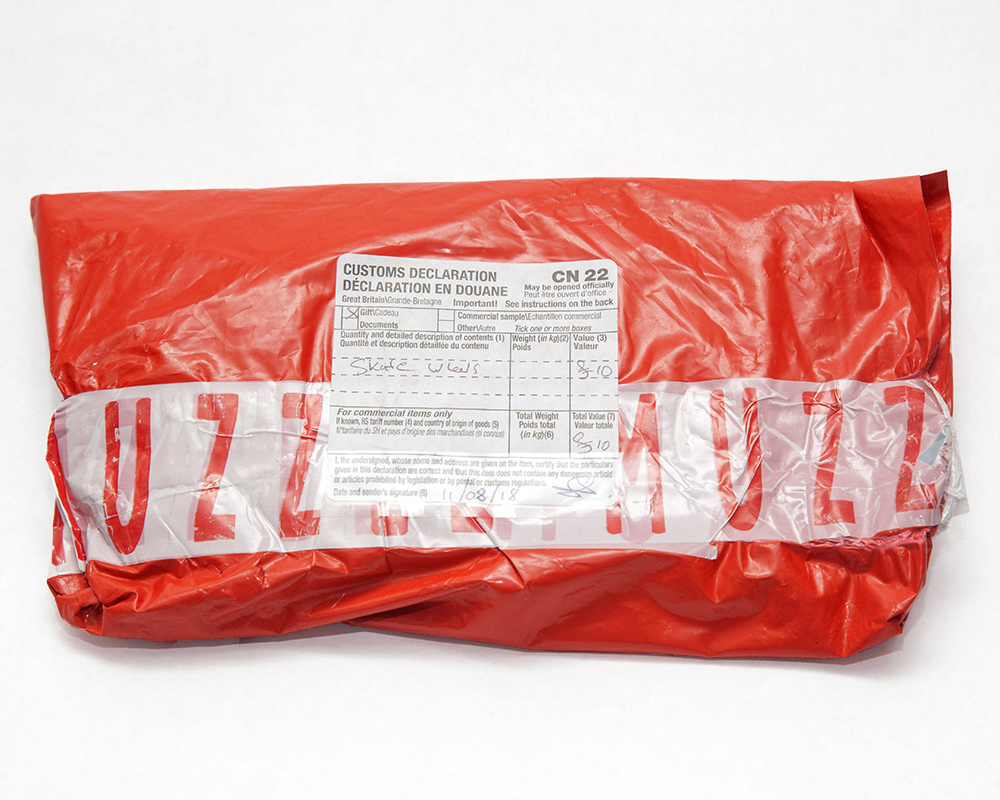 Throughout rollerblading’s history, we have seen the coming and going of a handful of companies. Whether it be financial mishaps, lack of management, or lack of a demand, there has been a plethora of reasons for the demise of some of the best companies that the sport has seen. In January of  2018, after 10 years in business, Dirt Box was the next to be added to that list, but it wasn’t the last we’d see of its co-founder, Sam Currie. Over the past month or so, there’s been a bunch of posts of people receiving packages for a brand called Muzzle. Following the same DIY aesthetic as his previous endeavor, I reached out to see who was behind the brand, and to no surprise, Currie was the one to answer. Eager to learn more, I spoke with Sam a bit about this new project, the ending of Dirt Box, and what the future holds for him…

I wasn’t actually going to do anything in skating this year. After Dirt Box, I had a month where I was moving house and then just working and trying to slow life right down, and enjoy having some free time in the evenings and weekends. I then started on a new project I’m doing outside of skating, but kept having ideas for skate stuff, then I decided I’d start a new skate brand in 2019, because I missed having that outlet very quickly. I was chatting to James (Bower) one night on WhatsApp and asked if he’d be down to be involved. In some kind of serendipitous moment, he gave me a really good name for it. 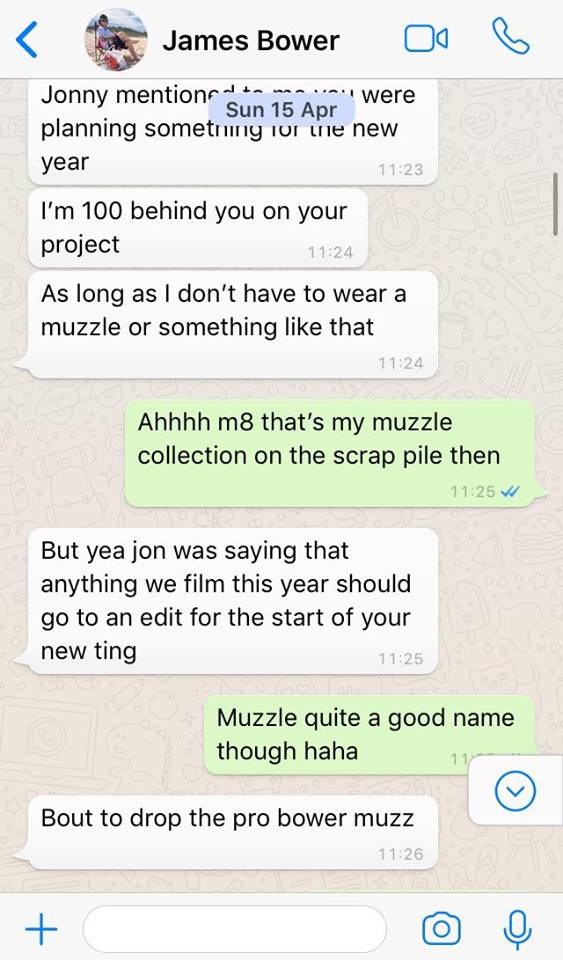 Currie’s conversation with James Bower that led to the naming of Muzzle
I already had an aesthetic I wanted to try out, so I took the name and created a font that mimics the road paint over here and was happy with how it came out. I then wanted to see what it would look like on a product, so started working on packaging ideas and ended up ordering a shit load of tape stoned one night. After that arrived and I loved how it looked, I kinda ran with it and have sampled a fair bit of product in the last few months. 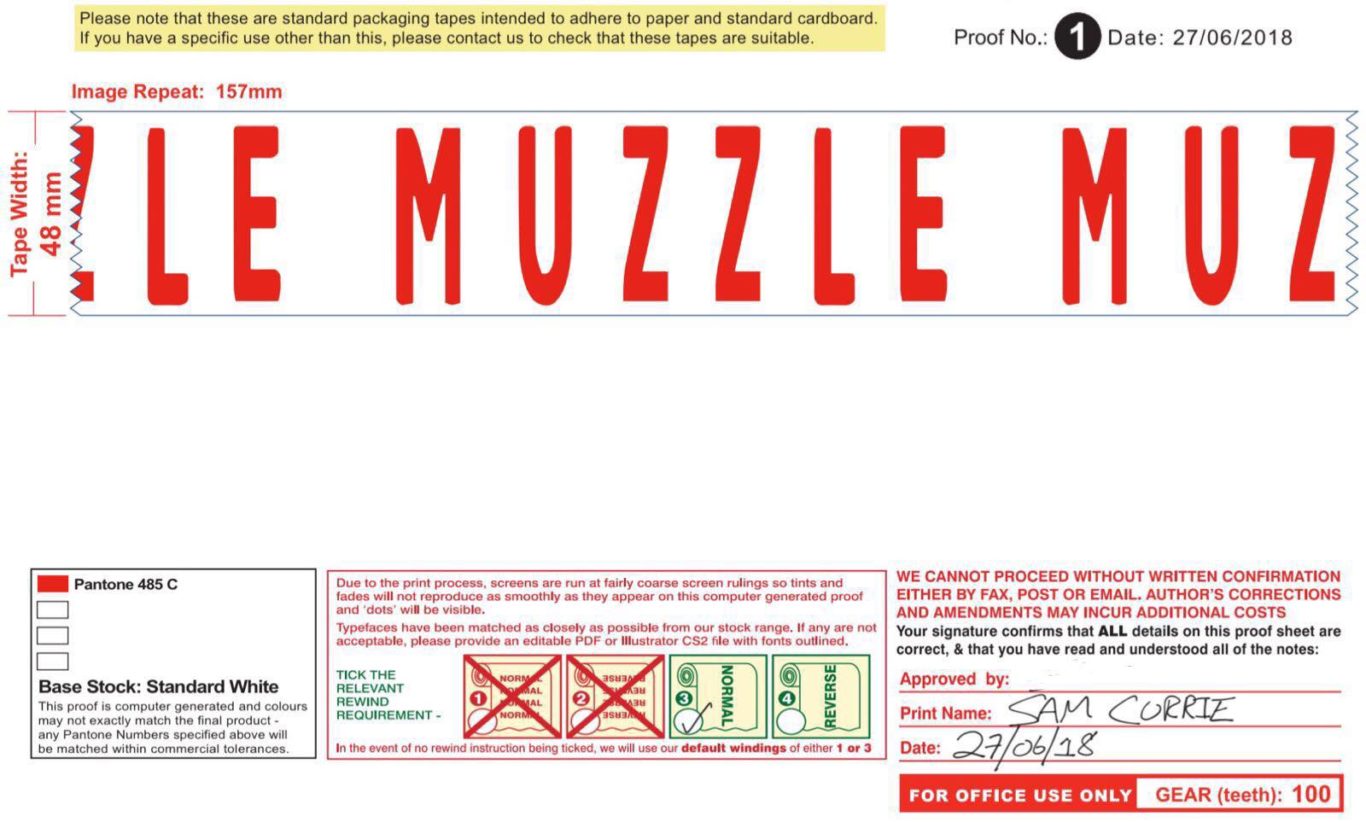 A proof for the Muzzle packing tape – Image courtesy of Muzzle

So you’re making wheels too yeah? How’d you get into that?

It took me three years of getting turned down or blanked to get the first Dirt Box wheels, which my friend James went two’s on with me; he’s pretty much responsible for everything I’ve done wheel wise because I couldn’t of made that first order without him. I wasn’t happy with the terms the factory gave me though, so after that first run of black 57/89’s, I spent another year getting samples from different places right; from small speed and hockey wheel manufacturers in France to larger companies most people are using. 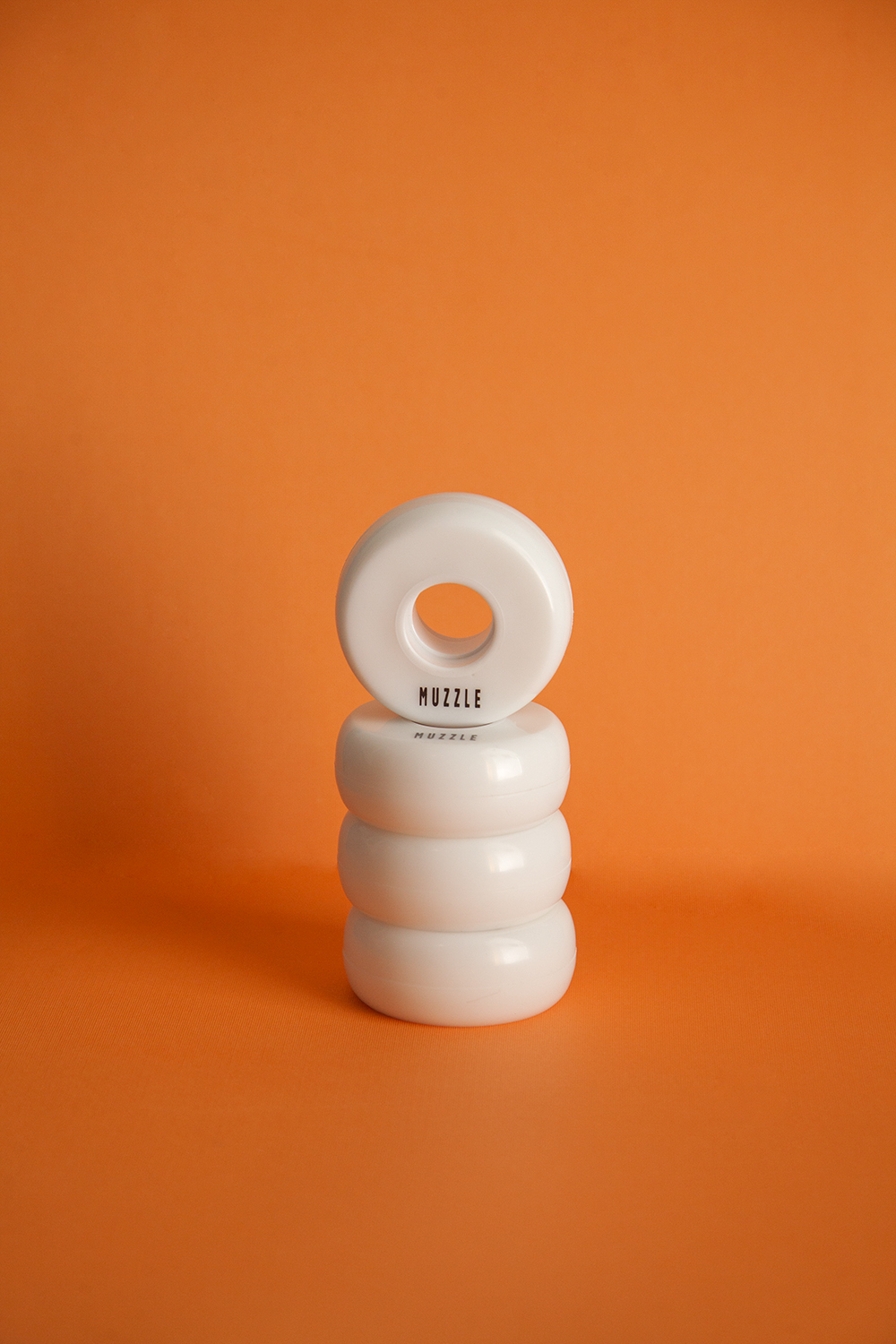 That led to those harder white ones we done. The second factory still ended up shafting me though, because the 55/95 and 57/96 were both the same as the 56/90, which I didn’t find out until I was taught how to test them fairly accurately myself after I had sold through them all. They took forever to get them out to me, and on one order took my money and never came through. That has been resolved now, but I’ve moved manufacturer for Muzzle. I have a few more options with the new factory, they’re much more reliable and I’ve managed to keep the same profile which we all enjoyed skating. I definitely have more ideas than manufacturing knowledge/contacts but I like that muzzle is another full DIY brand like Dirt Box; I’m putting all my effort into urethane and accessories this time so hopefully things progress a lot faster on that front because Dirt Box was primarily clothing as far as what I was focusing on. Everything is a steep learning curve because I’m completely self taught in all of it and doing everything from sourcing to product photos, marketing, web, team management and sending them out myself; it’s hard to be the best at what is usually about 10-20 separate job roles, but I try my hardest and enjoy it.

I really love what you did with the post card you sent me. Who was that originally written for? And where did the idea come from to include that in the packages? I feel like it is a very intriguing touch. You sort of lay yourself out there in a way, but, and hear me out on this last part, there’s something romantic about your situation, it’s really inspiring. You sort of speak to an effect of being down on your luck, but you’re moving forward, slowly but surely…

The postcard was mainly because I didn’t have any social media accounts at the time and I wanted to let people know I hadn’t just ducked out after Dirt Box. It felt like a more personal way than a digital post somewhere. I sent 100 postcards and pencils out, originally I wanted to write each one individually, but after trying a couple it was too hard for them not to become formulaic and it felt less genuine than doing it properly once; it would of taken so fucking long too haha! The idea to do one and duplicate it came when I was moving and found a set of postcards I bought at a Kills’ gig about ten years ago. Alison Mosshart had scanned ones she had written and put them out under red meat heart; it was a set of four and the names and addresses are scribbled out but it’s really intriguing to read. To get the feeling right for mine I wrote it to my best friend Anthony Zinonos; we started dirt box together. He moved to Oakland and I haven’t seen him for a couple years. It is to everyone that received it though if that makes sense, even all the people I’ve never met. All those people have supported my ideas and helped me in some way, it seemed like the best way to write to them and it mean something instead of just being another heartless advert. 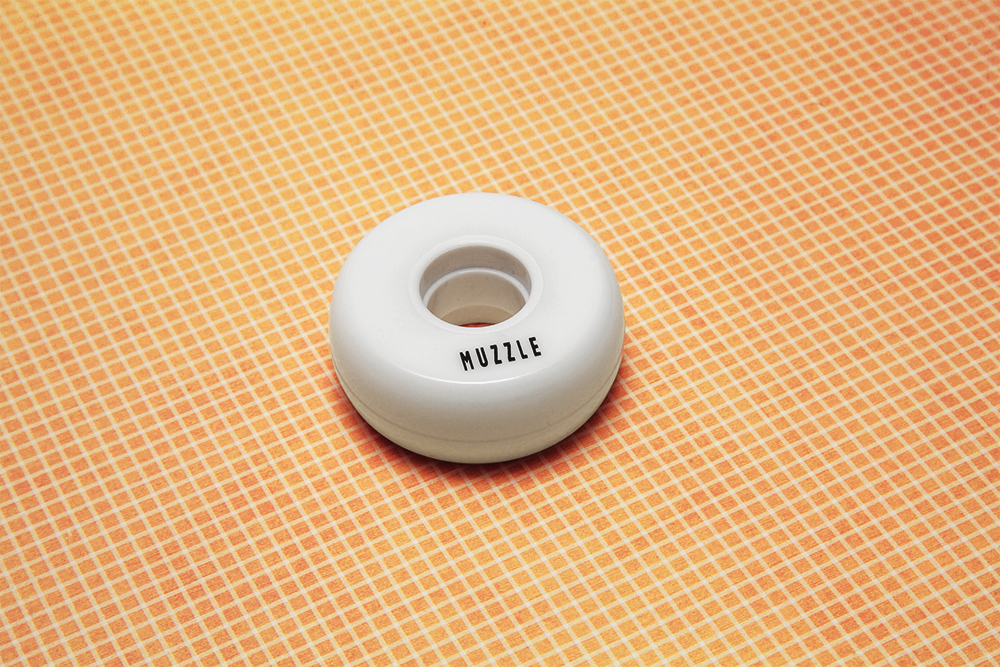 I think you’re doing a pretty solid job. It isn’t easy seeing the fruition of a company all the way through. That said, I think you’re on the right track. You’re working a lot with Jon Lee, can you tell me a bit about that relationship?

I speak to him most days. I’ve been working with Jon since the early days of Dirt Box; I put James (Bower) on and then Jon sent over the first footage of him for a 5789 promo I was editing at Christmas. He then edited a 5789 promo of just James with that sick backslide in it not that long after. Jon’s one of the most misunderstood people in blading. Going through the raw footage of the short edit we put on Instagram today reminded me just how much he does behind the lens; he says all the right things at all the right times and knows when it’s best to just let someone have their space to figure a trick out. He’s one of the most passionate people I know which has caused him problems in the past but if anyone were to reach out to Jon he’s always gonna give you time and be honest. A lot of people don’t like honesty unless it favors them, but I’d rather have one friend like Jon and get called out when I fuck up than a hundred that will watch me make shit decisions. He’s stuck by me through a lot and done far more for me than just wave a VX about. I think people had trouble digesting some sides of dirt box because we didn’t filter anything; I have no interest in telling people what they can or can’t say and do even if I don’t agree with them. A world full of brands and marketing that make life out to be perfect is false, we all fuck up and we all have our demons. Wear your flaws like a fragrance, the right people will stick by you.

Curious to know, if you don’t mind me asking, what happened exactly with Dirt Box?

Dirt Box was no longer sustainable unfortunately, although I do think it went at a good time. Ten years old and some stuff I’m really proud of came out right before I had to kill it. I was propping it up with my wages for the last few years, but then I quit my job and stopped a side business I had going to move in with Harry (Abel) for summer. I couldn’t find work when I moved there, and then ran out of money, so I had to move back and go back to the factory I was working in before I left. Without the side business too and no savings, though, I couldn’t bail Dirt Box out at the end of the tax year like I usually did. I’m not that bummed about it though, I think these things happen for a reason. I don’t know what else I could of done with Dirt Box; it wouldn’t of been fair on all the people that made it great for it to just slowly fizzle out. 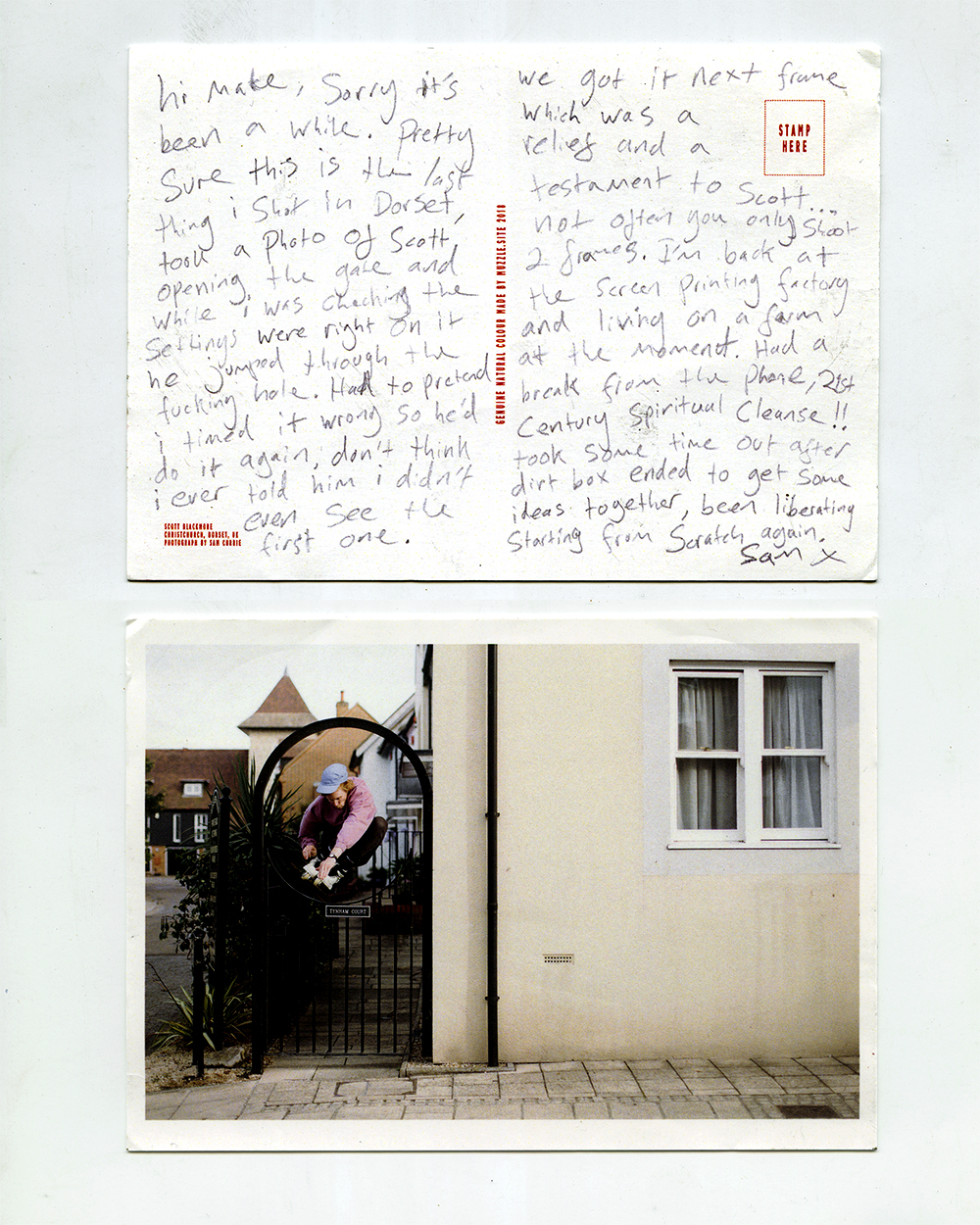 I think failure is something people avoid to acknowledge, I guess because of the shame factor. But I feel like our failures, more than our accomplishments, are what hone us into what we truly are…

I’m definitely well seasoned at failing but I still enjoy the process of trying; I seem incapable of admitting defeat, which will hopefully lead me somewhere eventually. I don’t hate my job, but the pay is shit and it fucks my body up so I don’t see much longevity in it. I’ve considered trying to find career paths, but any spare time I get I always end up putting into skate projects, even if I’m consciously trying not to. When I’ve got Muzzle off the ground I might have another go at sorting out my real life but for now it’s a nice escape from it. 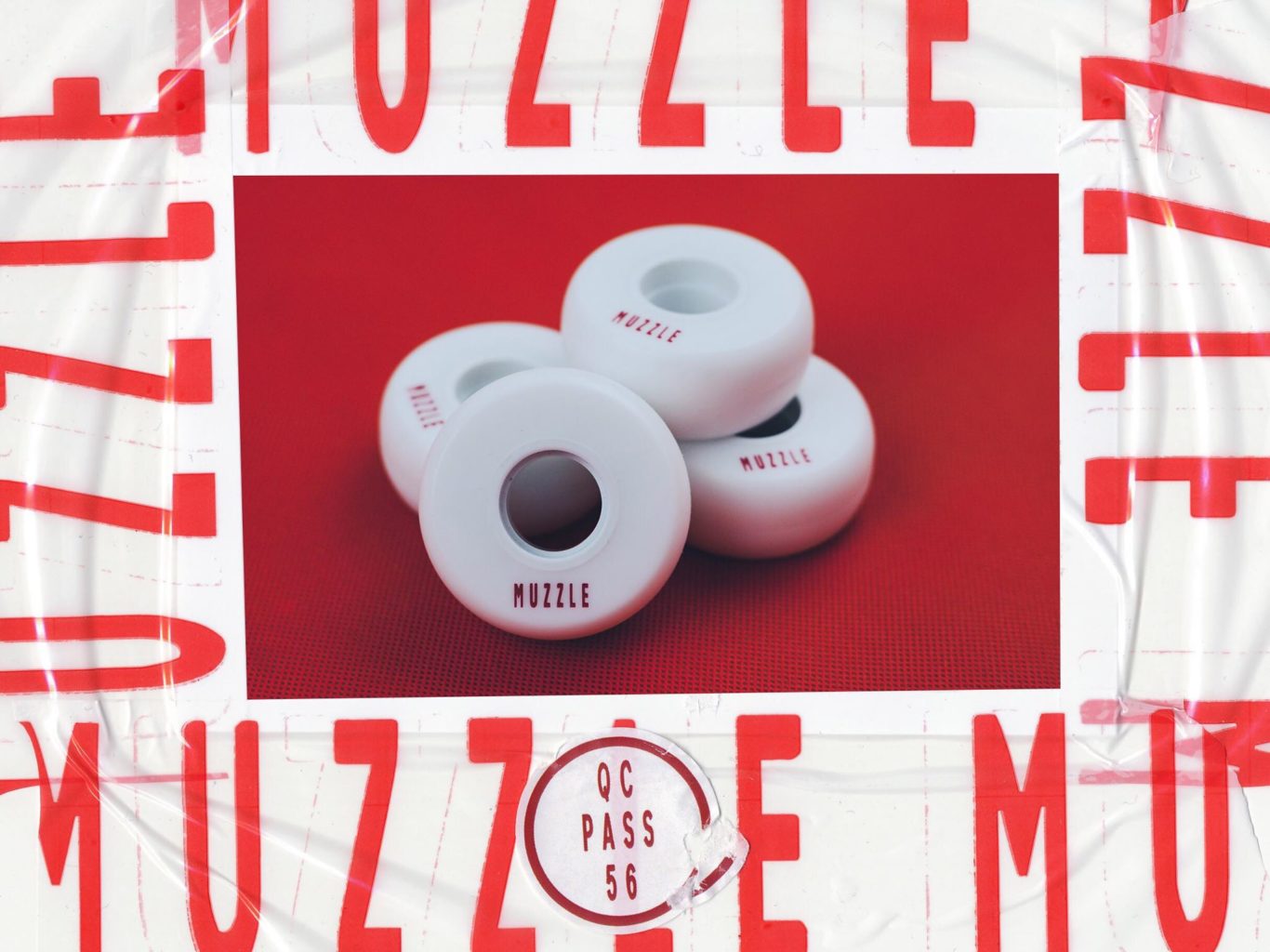 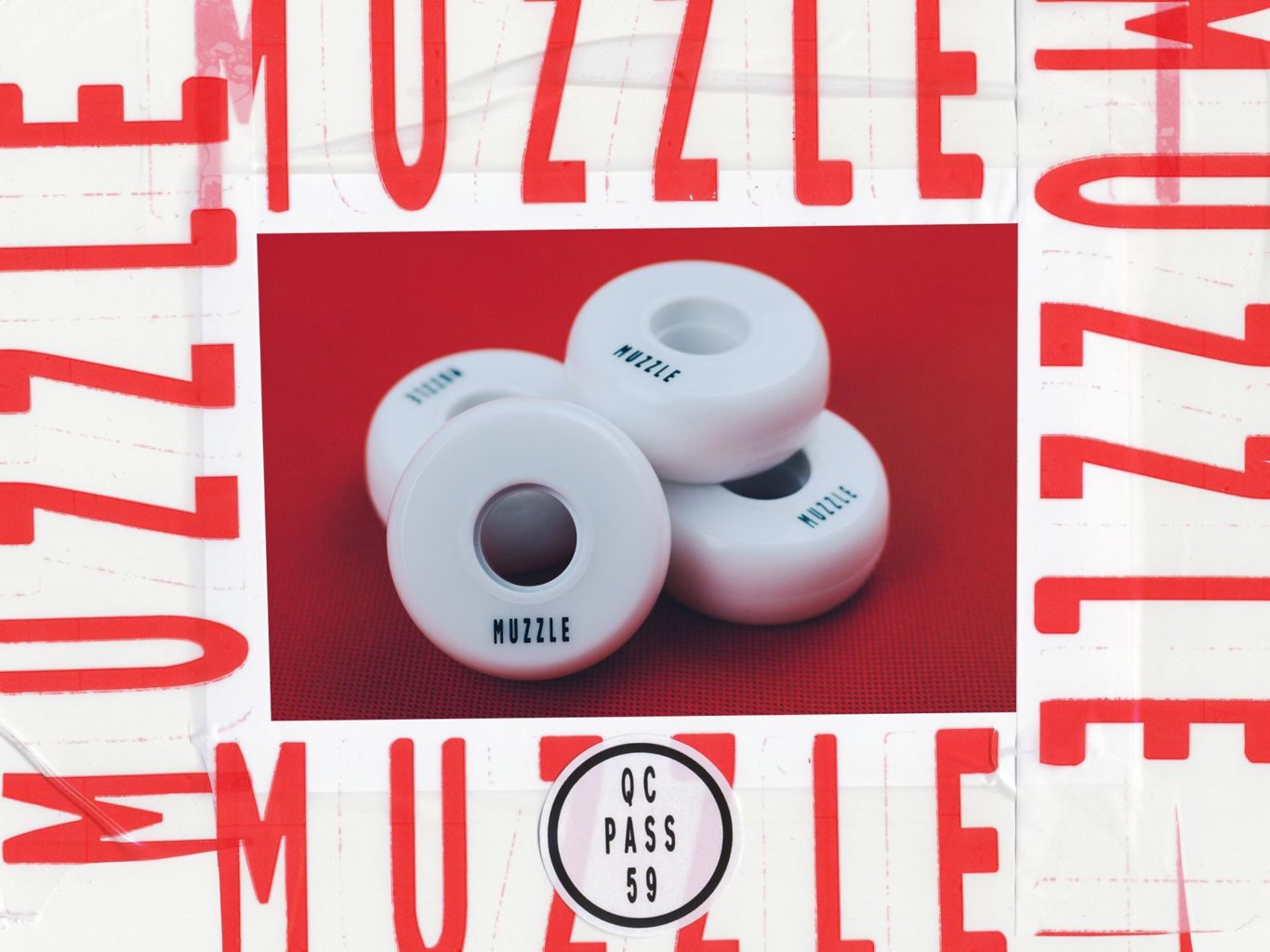 Do you have any goals in particular for Muzzle?

I’m flying by the seat of my pants mate, try keep it progressive and fun. As a prolific underachiever, I find very little credence in goals haha…. 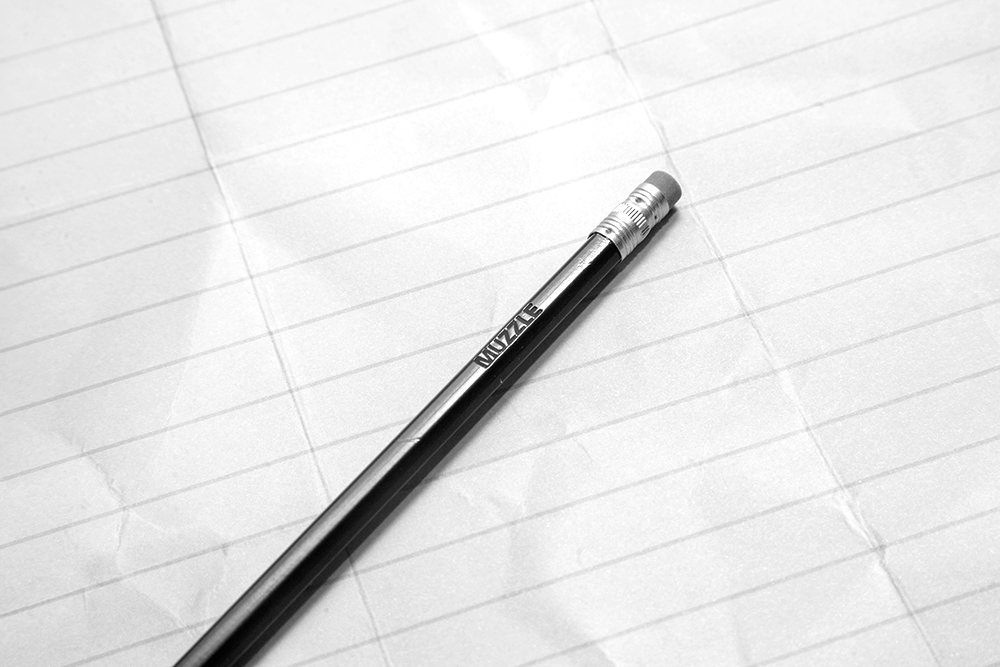 Muzzle is based in Norwich, Norfolk in the United Kingdom, founded and owned by Sam Currie.