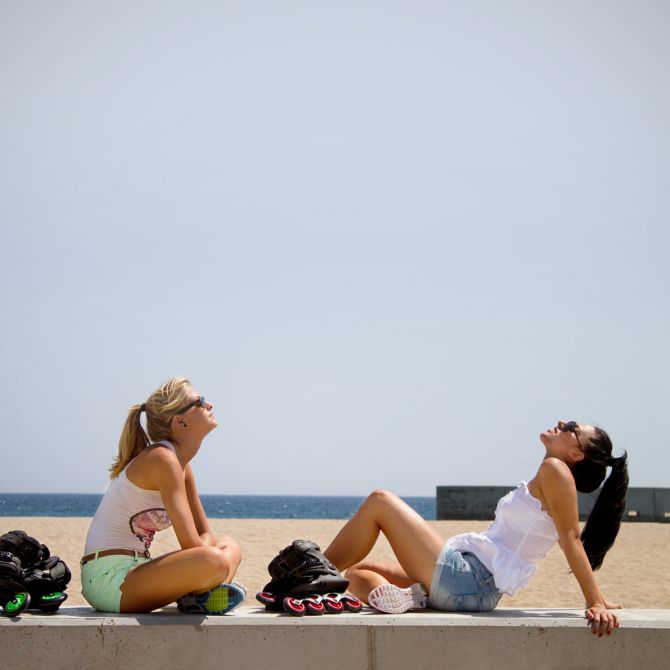 Oli, after years as a brand and product manager for The Conference companies you have decided to start your own venture. How did that come about?

After nine years working in Aggressive, I rediscovered my love of actual rolling with the whole Powerblading movement. I move around in the city only on skates, so I was finding myself spending more and more time on big wheel skates, at the time some Xsjado Powerblades. I got so many looks from people on the street when taking them on and off, and this little thought started to grow inside me – I wanted to create something that I could direct completely. So I spoke to my fiancé and business partner at Etika Projects, Tina Ziegler, and she loved the idea. So we decided to go to Powerslide to present this project.
Around the same time I was also at a point where I failed to believe that Aggressive skating was ever going to “come back” unless we actively did something to help it. Even though skating is cleaner than ever, and tricks are more technical than ever, people don’t see it. People aren’t really starting to aggressive skate, and I genuinely believe that it’s because people don’t skate. I think a lot of people don’t skate because it’s not cool, so therefore I wanted to have a shot at making a cool fitness skate brand, with a super high quality skate that also brought something “new” to the fitness market. It’s a lot of fun to be working on something completely new, and we are lucky enough to enjoy complete creative freedom.

After the idea was born, how long did it take you to have the skates available? What has to be done to get a new company together?

I sat together with designers Tina Ziegler and Anna of BCNROLLERS and drew up a plan for what we wanted to do with this idea we had, and subsequently went to Powerslide to present the whole project. They changed a couple of things, but for the most part they were really behind it and loved it. The next stage was to present it at the Powerslide distributor meeting in June 2012 with the first samples, and get the feedback of Powerslide’s distributors and agents. They also loved the project and gave a lot of valuable feedback. Then I hopped on a plane and went to China for a few days, visiting a number of factories to make sure the skates would turn out exactly as I had envisioned them, testing various parts and materials until we were all really happy with the final result.
Throughout the whole period I was testing multiple samples of all parts before finding the perfect balance. Parallel to this, Tina was working on the image of the brand and once we had the samples finalized we put together the catalogue. The final skates arrived in October/November 2012. So approximately it took nine months from initial idea to product release. That’s unusually fast.

doop skates don’t look like they work well for pudslides on ledges, the souls resemble those of early 90’s Tarmacs and it seems they don’t accept UFS frames either.

Of course pudslides were one of our priorities when creating this project along with World Peace. Once we had achieved this, the soulplates were made to be lightweight, as narrow as possible (sharp turns/weight) and to fit 165 to 195mm frames. This isn’t an Aggressive skate, its an Urban Transport-/Freeskate. But at the end of the day, if you want it to be UFS you can slap a Xsjado soulplate on them. This was another thing I really liked about the project: It would be aimed to bring new skaters into the Inline market via the fitness market, and once they have learnt how to roll, if their curiosity pushes them towards aggressive, their skate would already be Aggressive ready. It’s a beautiful thing!

What makes you believe there is a market for a product like this? Years of research or a gut feel? Why does the world need doop skates?

The world needs to skate. There’s so much potential in skating but I wouldn’t say the marketing behind Inline Skating is very strong, and I mean no disrespect. Many skate models are old, old molds or cheap, poorly tested boots. Experienced skaters tend to loose interest in the fitness world very quickly – it happened to most of us – to never return. Well, I wanted to go back and help create something cool and quality for people starting out. Is there a market for it? People are fascinated by the skates, and I believe there is nothing else quite like them for a non-Aggressive market. It is up to us to create faith in the project and create a market for them.

What aspects are usually being taken into account when someone is thinking about purchasing a pair of doops? Is it a fun thing only? How big is the commuting aspect of it, saving money on gas or public transport and staying fit on the side?

The product is marketed around skating being a fun and convenient form of Urban Transport as well as an extremely healthy activity. The key for me was to create an extremely high quality, comfortable skate that would cater for experienced skaters as well as beginners. I didn’t want rivits, cheap wheels, or cheap prices. I wanted something excellent.

Could you fill us in on the name? What does it mean?

I wanted something nice to look at, clever and simple, and I also wanted something that would get people talking. We had a whole heap of names at first but they all sounded so cliché to me. Normal words that had little relevance, or made up words that just were a bit pointless, too. I always liked the idea of four circles representing four wheels. doop signifies four wheels. It says doop from above or below, and if it’s on the wheel or the skate, no amount of movement changes that it says doop. We wanted four skates, four colours and something short and simple, four letters. It’s also easily turned into a verb. Part of the plan for this company was to create the idea that you aren’t an inline skater if you have inline skates. You can just have them to compliment your life, so we liked the fact that you could play around with it: “Grab your doops!” “Shall we go on our doops?” “Lets go doop!” I like the way it sounds, and I think it gets people talking, for better or worse.

Speaking of the companies’ name, doop has just been through some legal issue that could be resolved fortunately. Care to elaborate?

Well I don’t want to say much about this, all I can say is that doop has received a lot of attention from big brands, magazines, TV and distributors of all kinds, which is extremely flattering. We cleared up one issue from a company from outside of the skate world amicably, and now we’re full steam ahead!

doop will soon celebrate its first birthday. Looking back, were there any problems that needed to be resolved that you didn’t think of when lining everything out?

To be honest I couldn’t be happier. doop has had amazing feedback, many customers have been writing emails of thanks and congratulations – the skates are very much loved, and we haven’t had issues with returns (touch wood) which is amazing for a first season of any product. I really couldn’t be happier at this point!

While the idea of having a sneaker in a skate isn’t exactly new in the skating universe, doop seems to be a brand that gets it right by using a proven concept.

Well it’s basically like a snowboard binding. People still look at the skates and say to me “Surely that doesn’t really work, right? Your foot falls out?” It’s worked for years on snowboards, and it’s worked for years on Xsjado skates. Of course it works, and it’s extremely comfortable and supportive. The fact that you can work with multiple shoe sizes on an extendible skate really brings a whole new world of comfort to the skating experience – they simply work perfectly.

How did the Xsjado guys react to your idea of modifying “their” skate?

Well I don’t know really, I wasn’t directly contacted. The thing is that the original Xsjado skate design was bought from Salomon and then modified by Powerslide for the Xsjado 2.0 and the Nordic line. Powerslide would be crazy not to try and use their parts for the best of all segments. The whole idea behind doop is to bring more skaters into the sport via working on the image of skating in the marketing and also by providing a desirable, high quality product. That’s only going to benefit everyone involved in the end.

How successful is the brand?

It’s been doing very well. Customers are very happy with their skates, and although the products only arrived on the market at the end of last year, and despite the weather and the financial crisis sales have been great and feedback has been exceedingly positive – what more can I say!

Where can we get our hands on some doop skates?

doop skates should be available now at most Powerslide stockists. We also created a concept store for doop in the original busines plan, in an effort to help any clients and new skaters with their decisions. The idea was to have a specialist available to answer all questions, and also not have to intimidate new rollers when going online to look at skates. There are so many models of skates, so many different kinds of wheels, protective gear etc., and I wanted to streamline all of this into a specialist concept store, The doop Store. So that’s the other option in Europe, but of course, your local store might also have them in stock!

Let’s say I’m in the market for a pair of skates and I’m diggin’ the doops, but I can’t decide which one is best for me. Can you explain what you had in mind with creating each of the three models and maybe point out some of their individual caracteristics?

Of course, doop Classics are the basic/cheaper model, mainly due to the wheels. The wheels, although 84mm, are very soft, which affects speed, as they are grippy to the ground as these are aimed at people starting out. They also come with a removable brake, but the boot is otherwise exactly the same as the other models. 84mm is a great size for all kinds of skating, especially both fitness and distance.
The doop Freestyle is a great pair of freeskates. They have really fast wheels that are great for slides, and the frame is at its shortest possible. You can barely fit a hair between the wheels. This means that they are incredibly maneuverable. Any little turn is super fast and they are made from CNC extruded aluminium which means they are very strong. They can be used with confidence on any gaps, tricks, slalom etc., so very all round skate. These are the skates I use the most. They don’t have a brake however.
doop Swifts are simply amazing. I never expected to be as into them as I am. They are exceedingly fast, but as they are three wheels and not four, they are still very maneuverable. You can pick up and maintain a lot of speed very quickly, and I’ve never had anything better for long distance. I never use public transport, only skate, and when I’m in a hurry or if I have to go long distance, then I always use these.