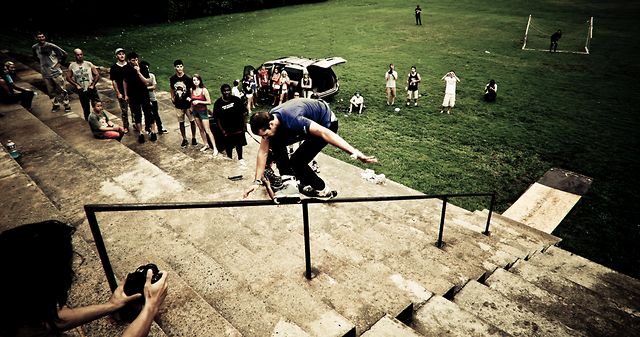 8 pork loins, two giant flatbread pizzas (shredded, grilled chicken atop pineapple salsa), and a fat bowl of gallo pinto. Bringing thirty of my friends to an “I’m leaving the country” party thrown by a Swedish chick. Sammy climbing on the roof. 12 ft trust fall. Coquitos. Chad… or Brad… climbing a tree and falling out. Girl selling boy toy out to the police so she wouldn’t have to go to jail for public nudity, public indecency, being drunk in public and sexually stimulating an officer of the law. Boy toy cuffed and thrown into the back of the car. Pretending to call my congressmen at three in the morning to shout the truth. “This is unconstitutional!” Police officer telling partygoers to get their drunk asses into their vehicles and drive home. Partygoers getting their drunk asses into their vehicles and driving home.

Despite scheduling the competition to start at 2p.m., we all woke up around ten to an oppressive overcast sky. People slept on and under tables, in the hall, curled up around the air vents and stacked on top of each other in the tv room. A light rain began around noon. Fortunately, it was brief and the sun dried the earth. Since we raised a chunk of prize money this year, we split up the three hundred odd dollars from entrance fees amongst the judges in increments of 5s, 10s, and 20s to pass out to competitors for sick tricks.

Bank to obstacles; plastic barrier, metal barrier, and a pvc box. Hard spin negative top mistrial from David Sizemore. Brad towing multiple people to the bank simultaneously. Brad almost launching his car off the ramp. Cooley’s hot flip hand slide on the support post. Daniel Henderson’s 900 to the street. Tim Taylor’s 540 AO wallride to forward. The owner of the lot allowing us to continue the comp. K-Dirty drinking. No Casualties.

Stadium rail; two stair gap on, five stair gap off onto a plywood and skatelite landing. In the rain. Garrett Slobey eight stair disaster mute grab to soul. Garrett Mitschelen true top porn to front royal into the grass. Laced. John Cooley top soul 540. Setting the tent up over the landing to keep it dry. Chico landing front farf under the tent in the rain Daniel top soul across the top rail, gap to soul down the stadium rail. Daniel busting breast in the wet grass. Mike Harper Front sav down the beast rail with no warm up. Mathew Anderson distracted (by a behemoth of a man walking between the rail and the landing pointedly looking the other direction), superman-ing off the end of the rail to face. I’m glad he was wearing a helmet. Watch it here. Apollo Creed! K-Dirty drunk.

Phil Gripper topsoul 540: pole jam to bank. Tim Taylor’s acrobatic performance (Tripple grab bio 720). Adam Bazydlo 360 into the bank to top soul on the gnar whale. John Cooley topsoul 360 off the gnar whale. The hard way. Landon gap to fishbrain on the disaster box. Julian Bah almost splitting himself in half on the side of the gnarwhale. K-Dirty Hammered.