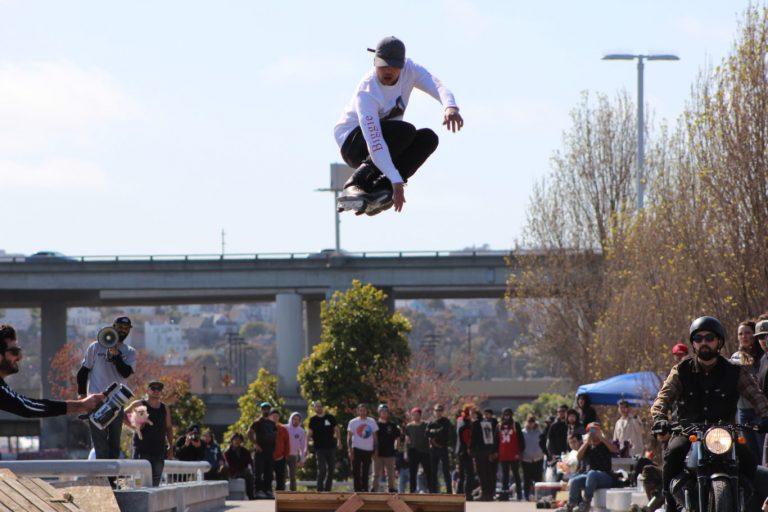 It’s filthy, but it’s not a contest. It’s a fiesta. 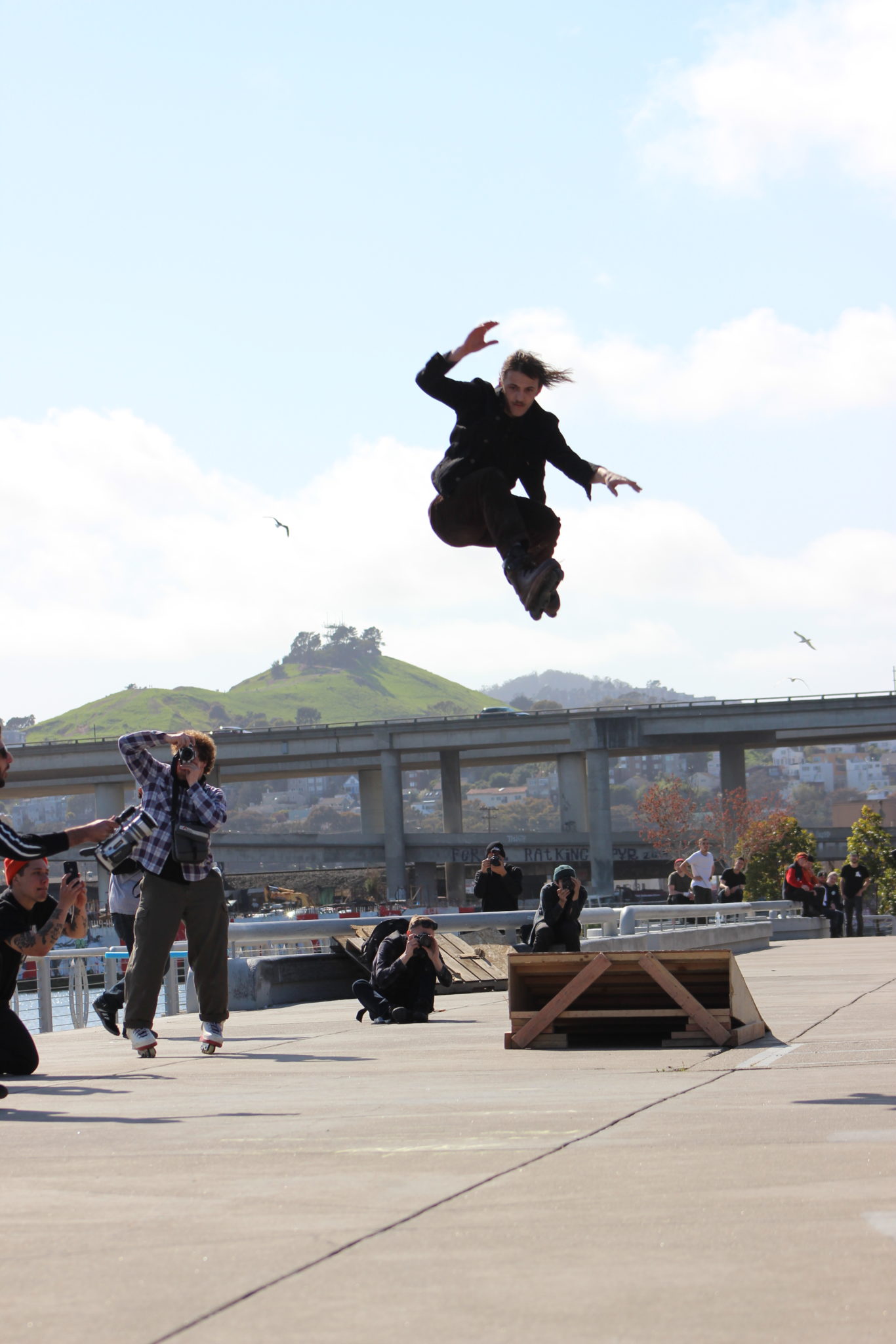 Writing and Photography By Brian Krans

SAN FRANCISCO— The sun was out, a momentary break in a recently unseasonably whet winter here in Northern California. Thankfully, the blade gods were intent on blessing us for Filthy Fiesta 2.

The first Filthy Fiesta was only back in October, but Erick Garcia is just too juiced to not throw a party on rollerblades. Because, as he readily points out, the Filthy Fiesta isn’t a competition or a contest. It’s a fiesta.

That means friends, food, snacks and spending BIG at the dollar store on things like foam footballs, candy, and decorations, but not skimping on snacks, drinks, pizza or cash prizes.

The first contest — ehem, I mean opportunity to skate well and get things like a nice carry-on bag with a Koko Nuggz pillow — was a rail-to-grind combination involving the tube rails and some of its lesser chunked ledges at Third and Army, a legendary spot for decades. Jimmy Kobryn won.

The second event was the races. Each skater had to hop gaps in a ledge, skip rope 10 times, and pop over the rail with a pallet-and-particle-board ramp, immediately duck under a rope, grind, and whip themselves into a gauntlet of foam footballs. Brian “BFree” Freeman won that part. 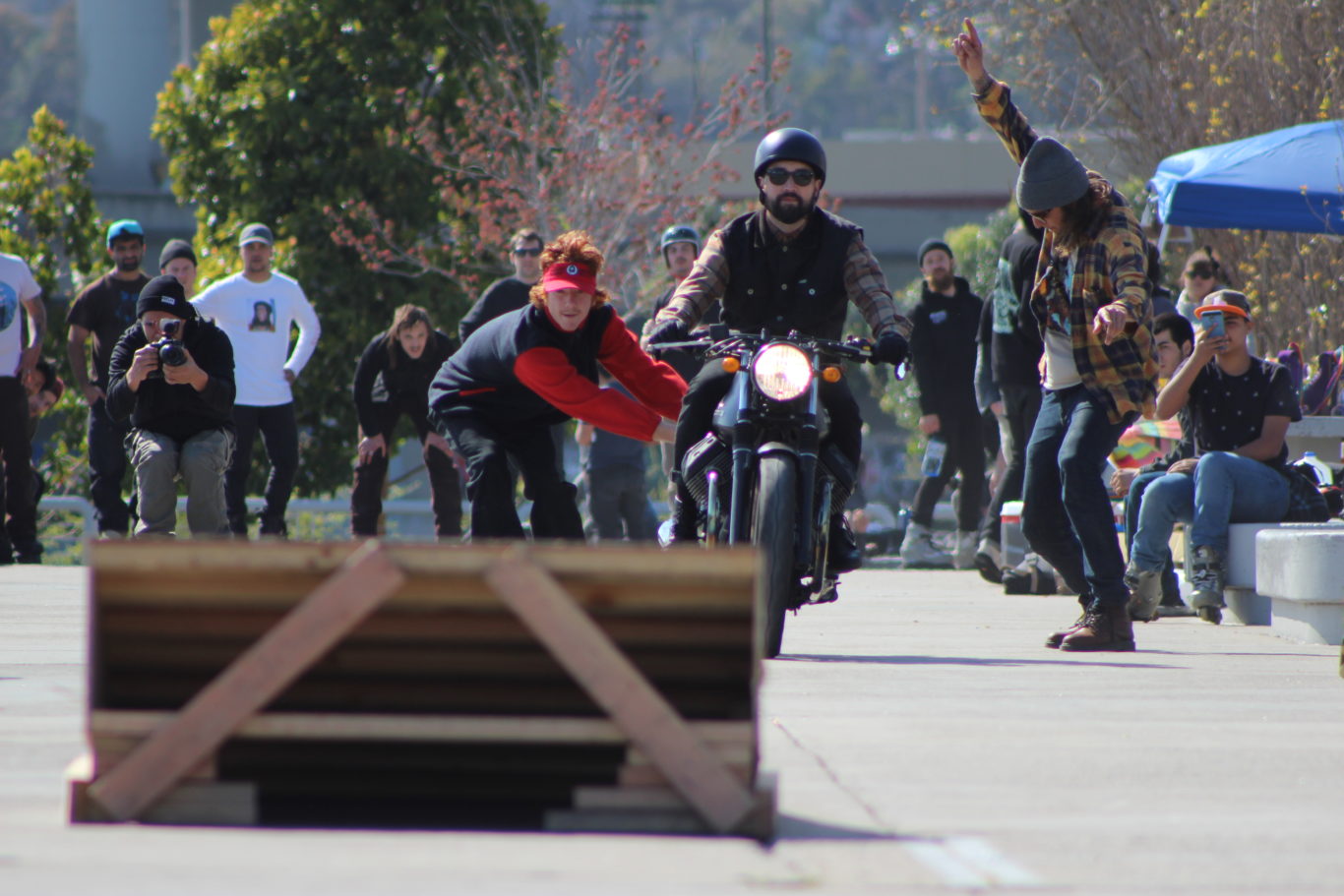 Then it was time for, as ESG essentially described it, the main event: the long jump.

The ramp had many improvements this time, thanks to the homie at BFree’s secret training lair, a.k.a. the indoor warehouse park by West Oakland BART. It was wider and had fresher materials. With a few reinforcements and a couple of screws, it was ready to send fools skyward. And it didn’t hurt that “Canadian Dave” Ghent was back again on his matte black Triumph to keep the cardiovascular exercise to a minimum and the hyphyness to the maximum. 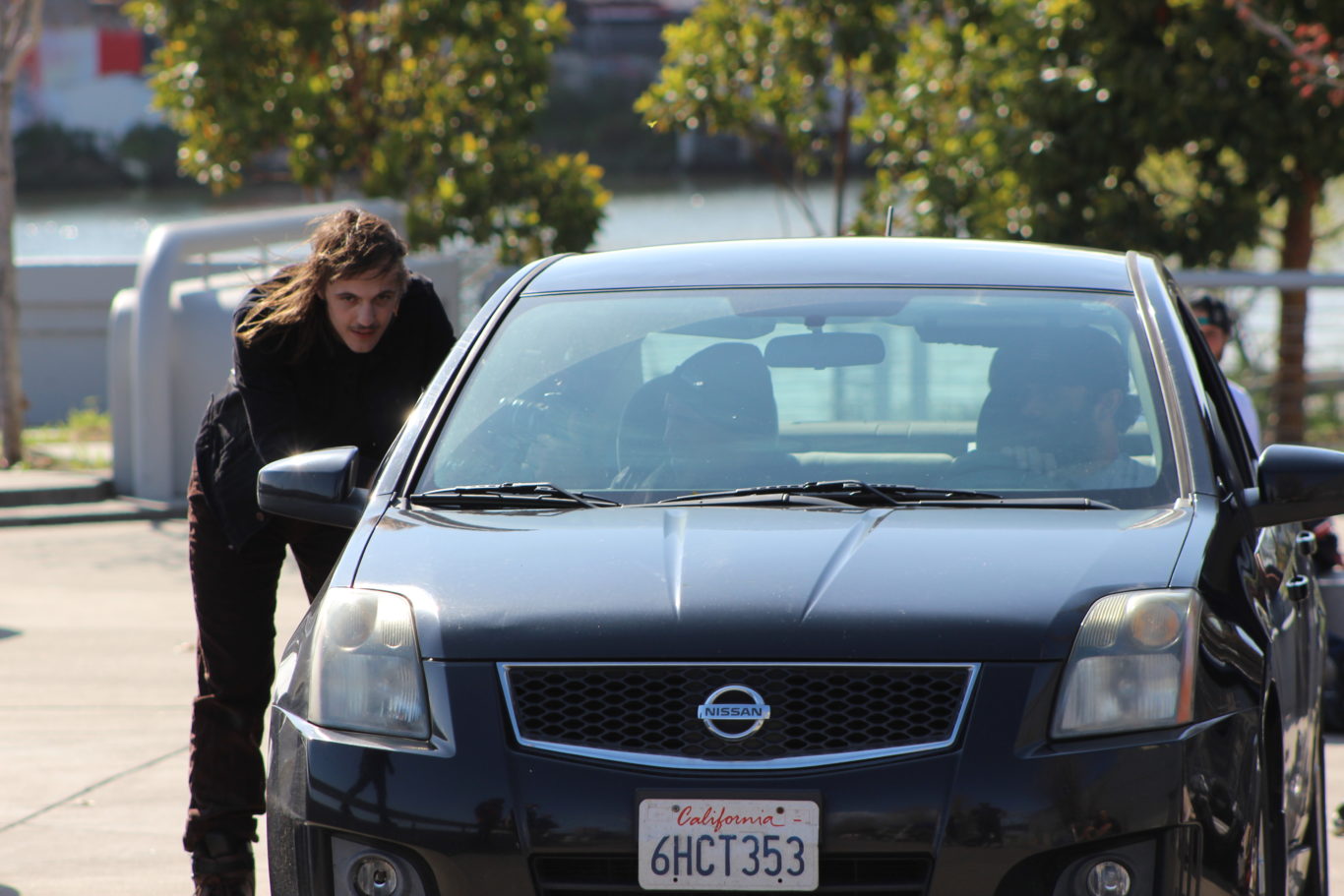 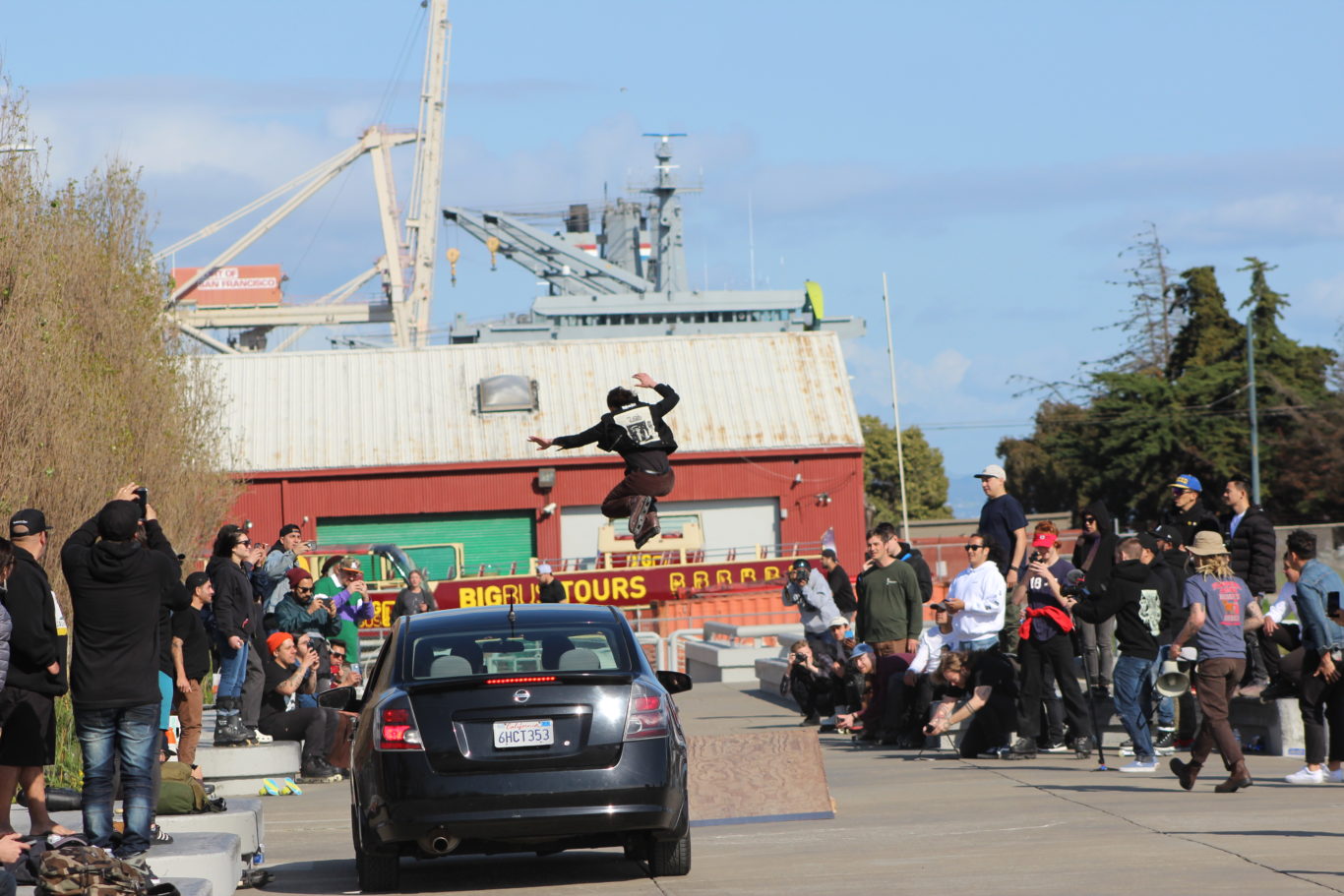 If anything — besides  being hella fun to watch — the long jump pays homage to the old days of demos in skate shop parking lots, doing tricks to wow the crowds, and possibly find a new recruit in the process.

For Filthy Fiesta 2, there were the usual Bay Area pullers like Michael “Gumby” Braud (pronounced Bro), Korey “Sneaky” Waikiki, BFree and people who like to linger and film, like Jimmy Kobryn, Joey Lunger, and others, including those who came up just for a little bit, such as Parker Richardson.

They started near the landing from the first Fiesta, opting to keep the strong winds at their back, as Canadian Dave punched the gas, his engine revving up before clamping down on the brake.

One after another, it was the punch of the engine, it growing louder and quicker as each skater was quickly towed to the ramp, a quick deep thunk of the metal lip smacking the concrete below, the unmistakable escalating thunder of urethane wheels barreling up plywood, and the whisking of bearings before whatever sound came after.

Sneaky, as expected, was textbook, an assassin of steeze. Jimmy, fresh off an earlier win and hyped up by his brother, Taylor, with camera in-hand, pushed it and punched it, transitioning quickly with the others as they shifted to the best-known skitching vehicle in the game, ESG’s black 2009 Nissan Sentra with a 2.0 liter engine.

It was just how this Fiesta was going to escalate.

Cameron was ready with his trusty yellow sidewalk chalk to mark and name each landing, but, as skaters launched beyond any available measuring tape, each mark in the concrete was studied over, as a huddle formed with slow-mo iPhone footage in hand. 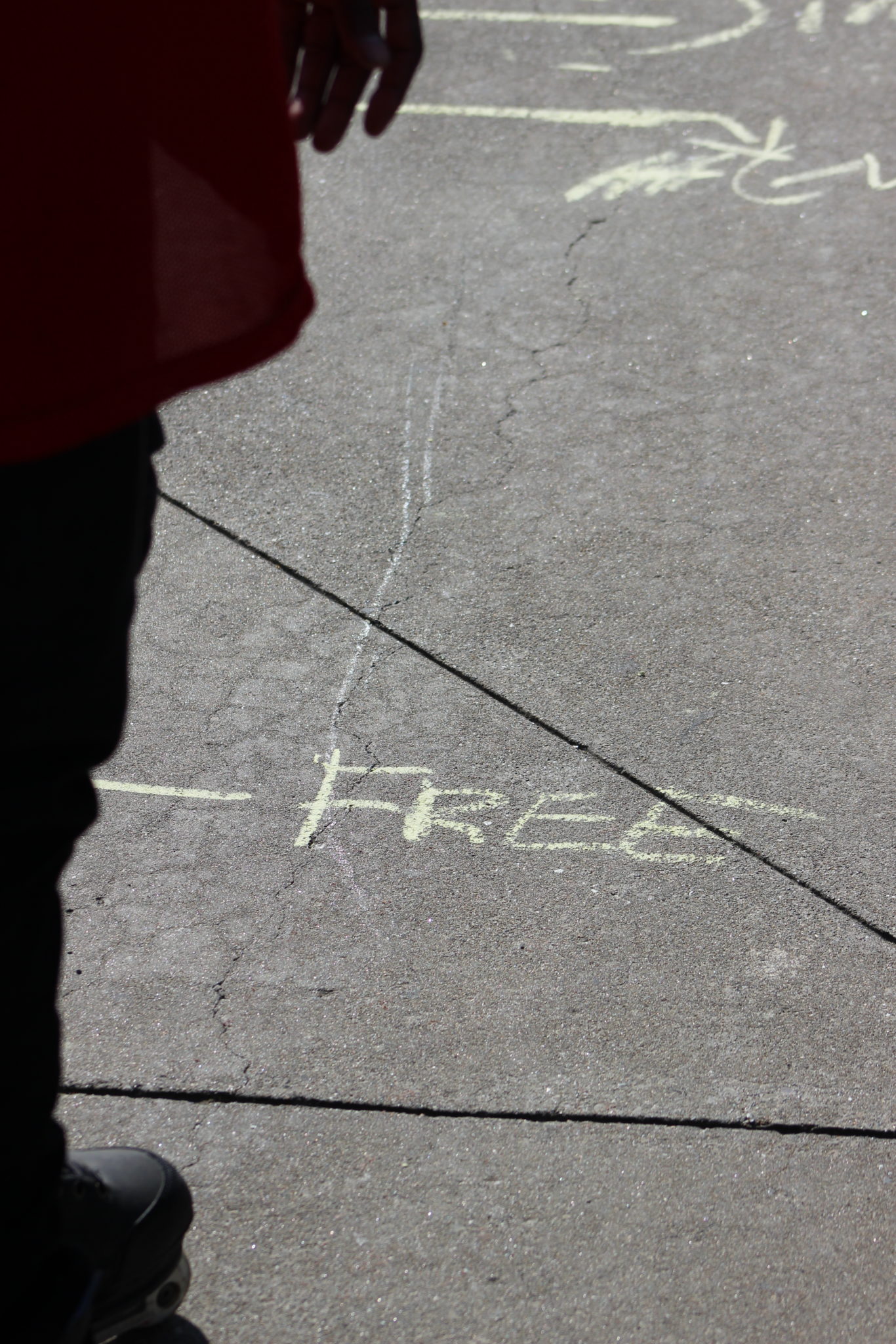 In the end, it was BFree and Gumby who covered the most ground. Gumby, in his truly masochistically fearless self, took it literally.

BFree had some ground tagged farther out that anyone. His hops and ability to essentially pause time mid-air put him well ahead, without any major spills. It was a deserved change of course, considering the same event back in October left him barely able to walk. And he still skated the next day.

With each attempt, BFree and Gumby kept coming faster and faster, chasing even a single indisputable inch, as each new yellow mark further east meant the possibility of cash in hand. But it’s not a contest.

Gumby’s last two attempts were ones for the record books, even if they’re mere blips in his storied history of slams and bodily harm. He’s given so much of his body to this sport, what’s another few inches of skin?

The second to last time, Gumby landed, but ultimately slipped out on his heels, the force of which created physical marks on the ground, searing white skin and black jean to the gray concrete and knocking the black sunglasses from his face. 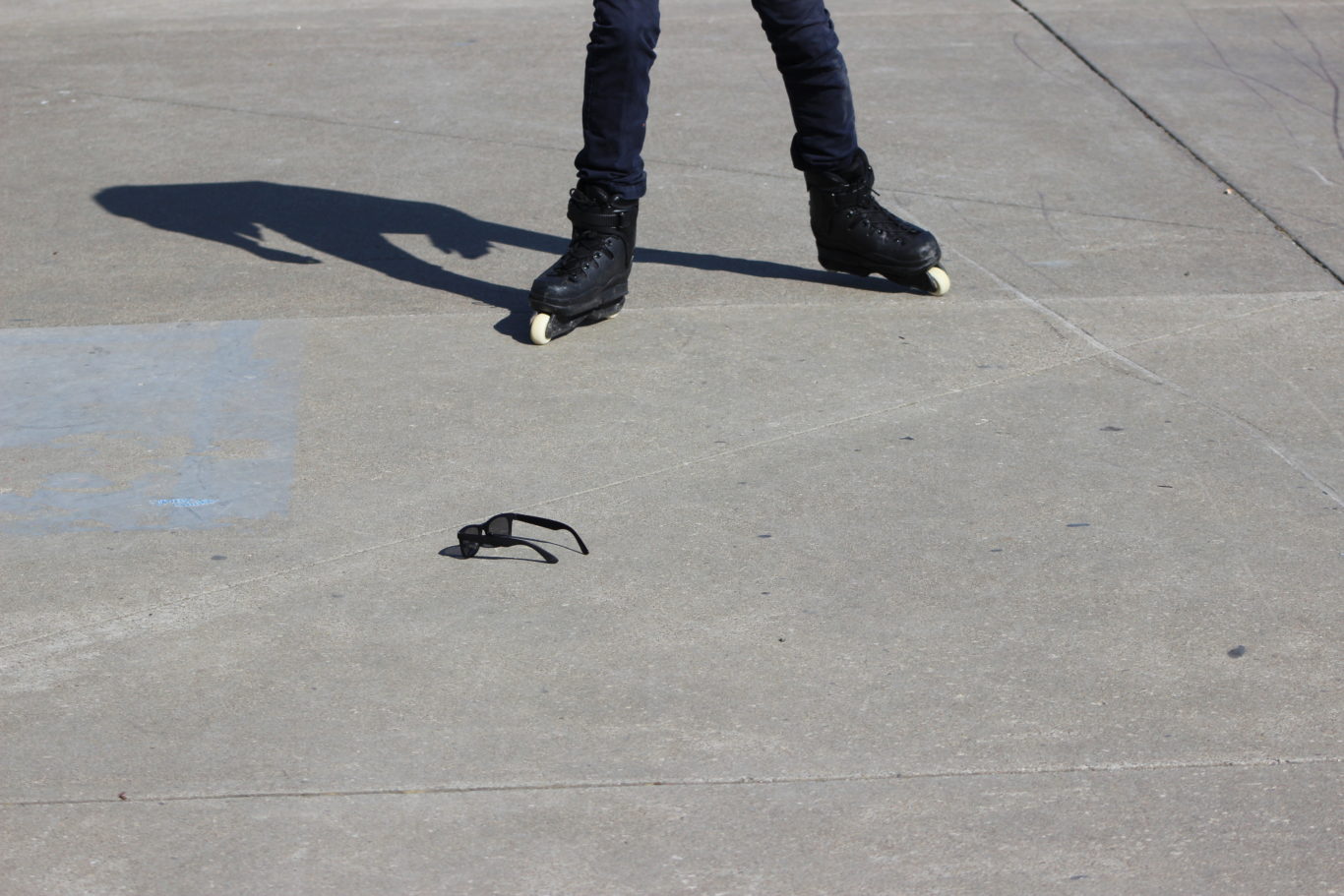 He picked up his shades.

He skated back down for the other end.

He went for it again, the ends of his black leather jacket fluttering with the speed of a Mazda. There was more silence. There was another landing with wheels beneath his feet.

Already-charred meat and blood on the pavement, the fine dust of shaved denim collecting in tiny tumbleweeds rushing behind him, Gumby scorched his ass twice. 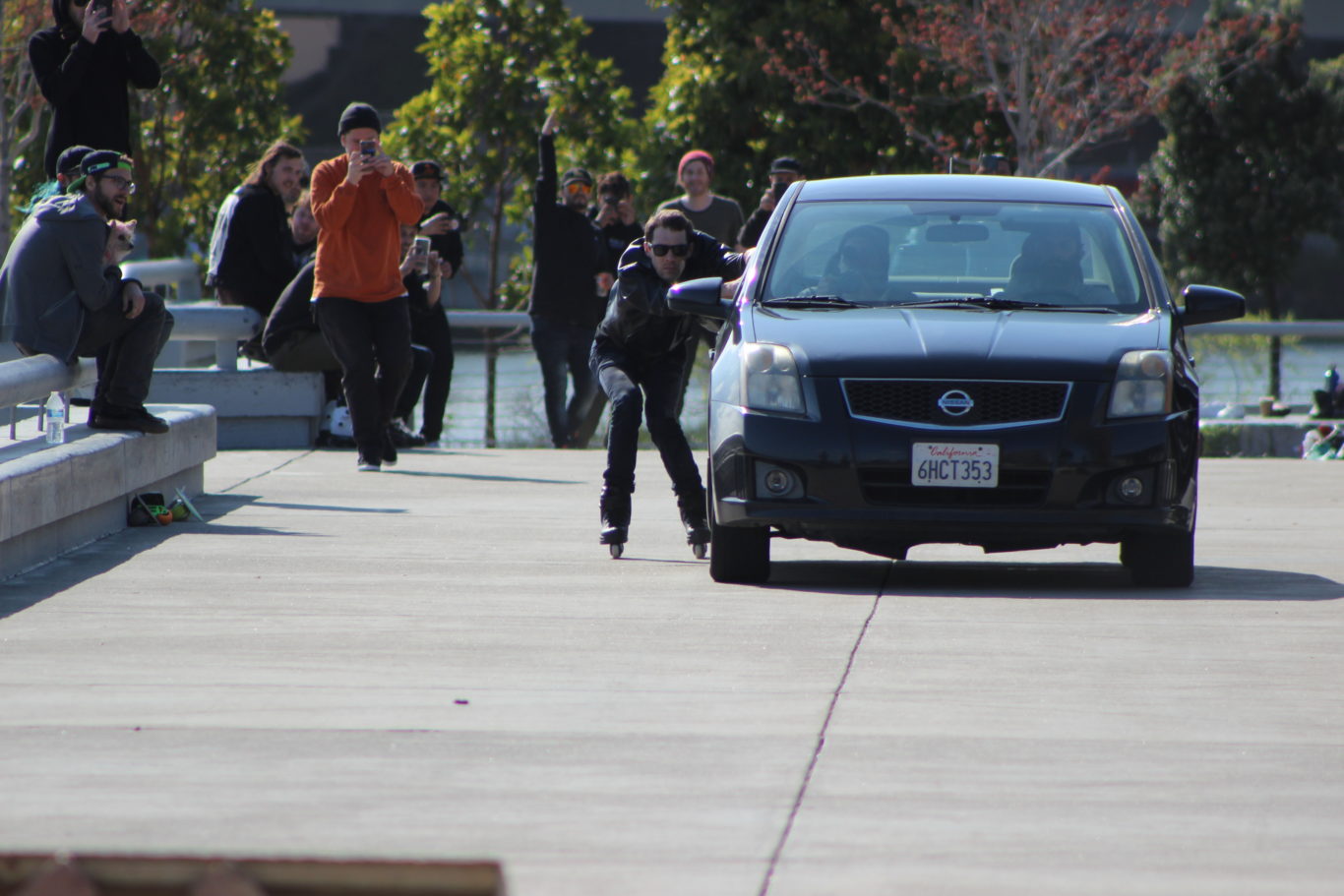 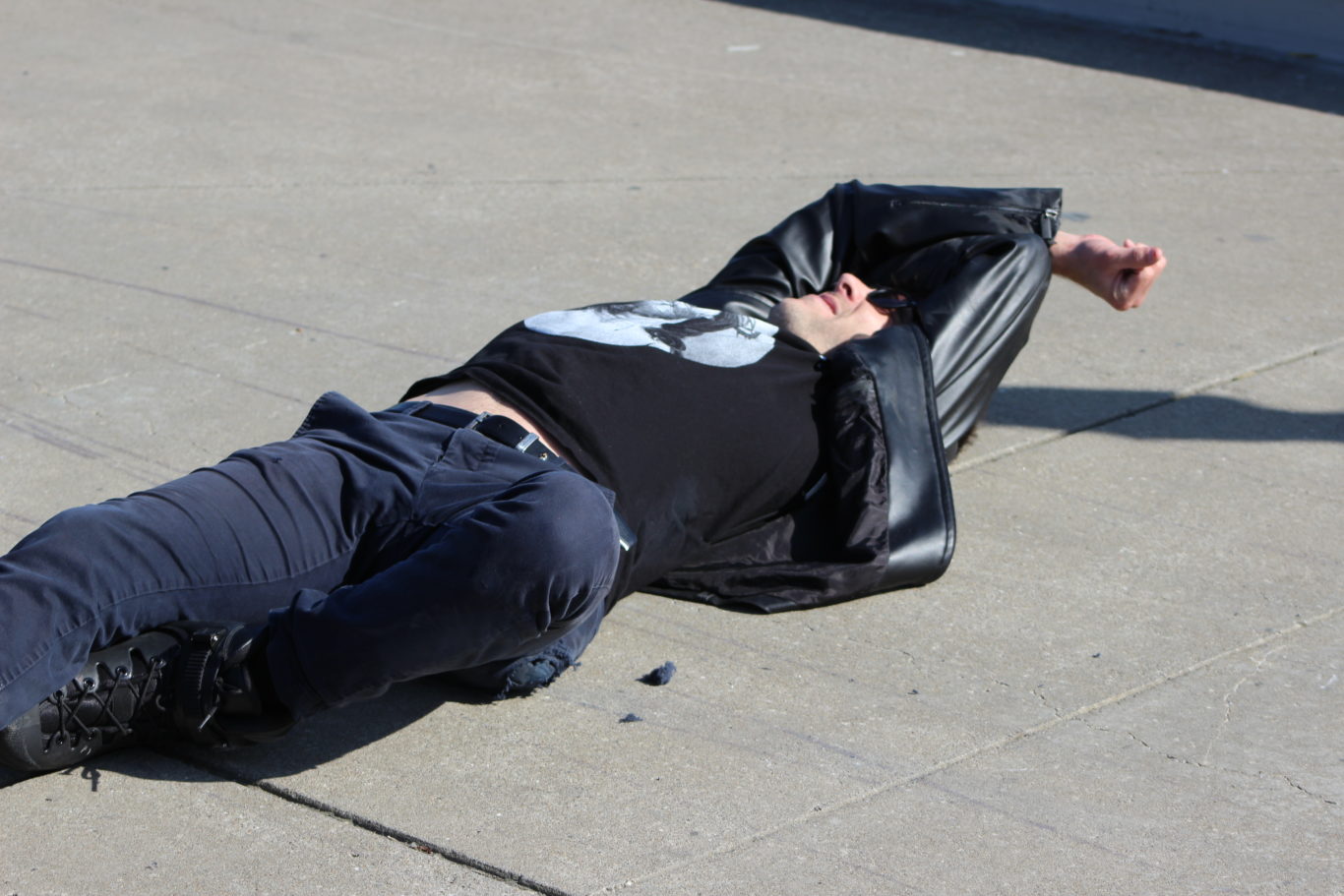 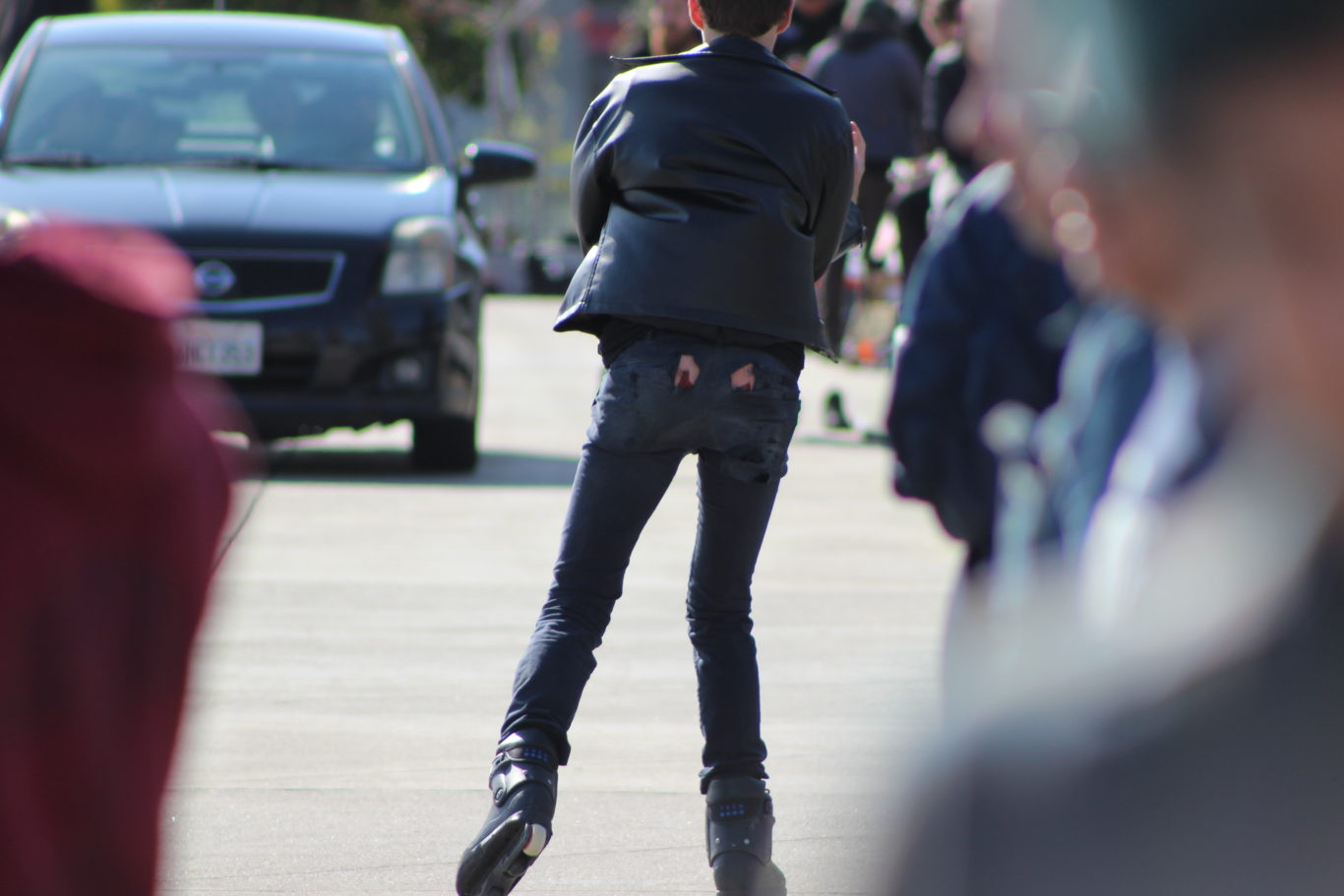 At this point in his life, Gumby’s really good about either masking or ignoring pain, but as he laid on the ground, his arm bent over his eyes, he knew must have found Jesus, Buddha, Allah and all those guys in one place.

He couldn’t match BFree’s distance and stay on his feet.

Bfree — on day 631 of skating in a row — took home the race, the distance, and the coveted MVP prize, earned in October by Skookum’s own Brendan Tidd. 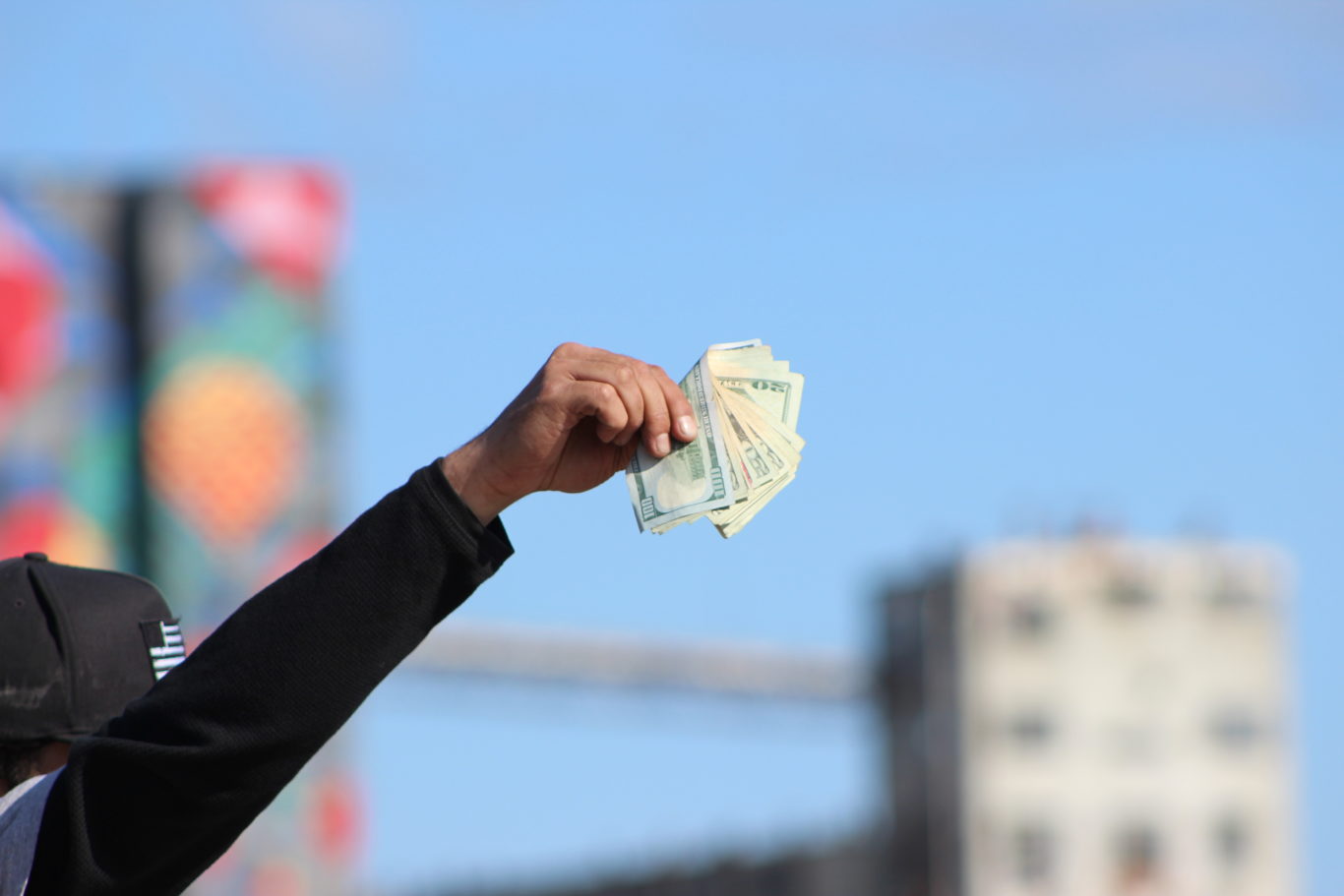 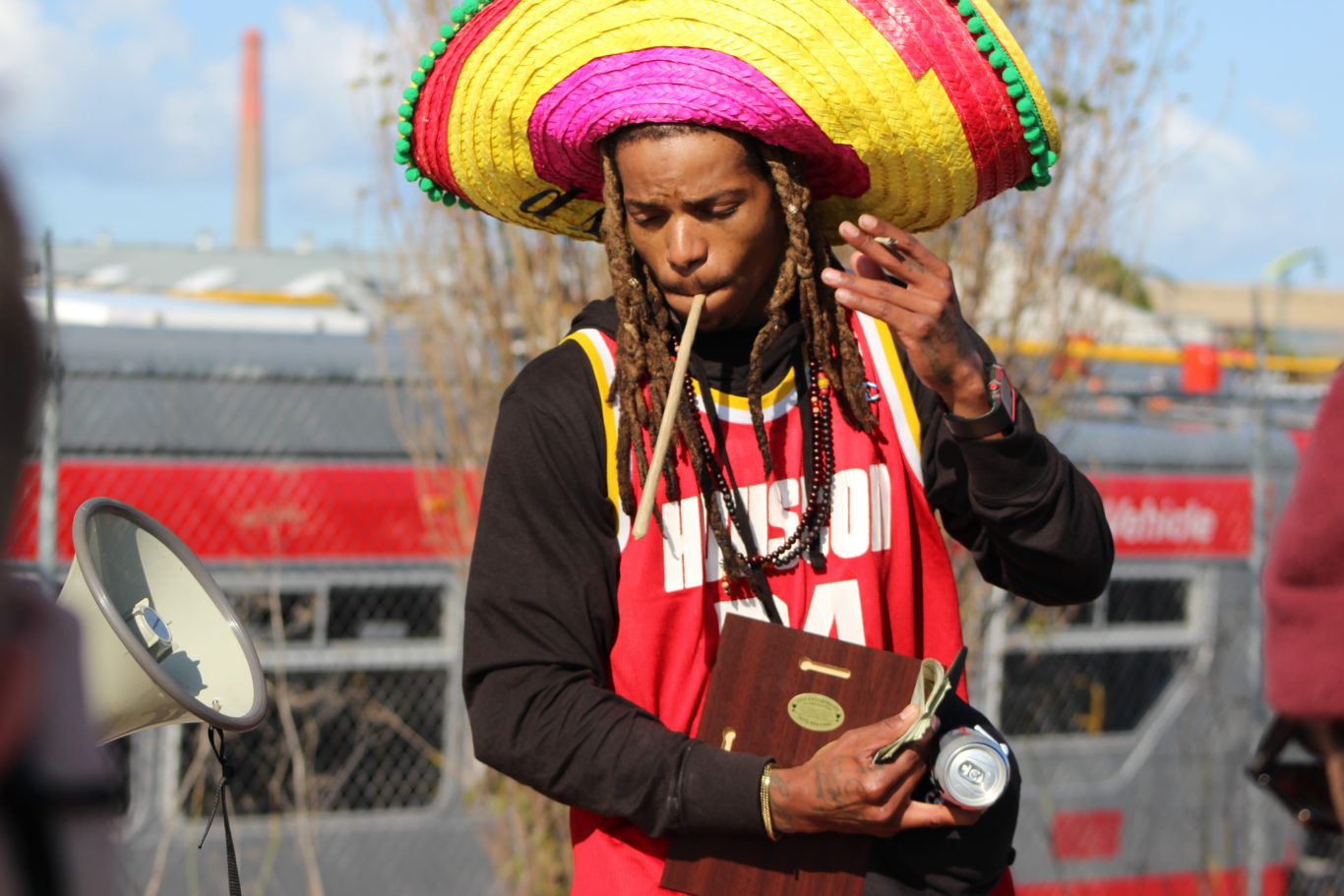 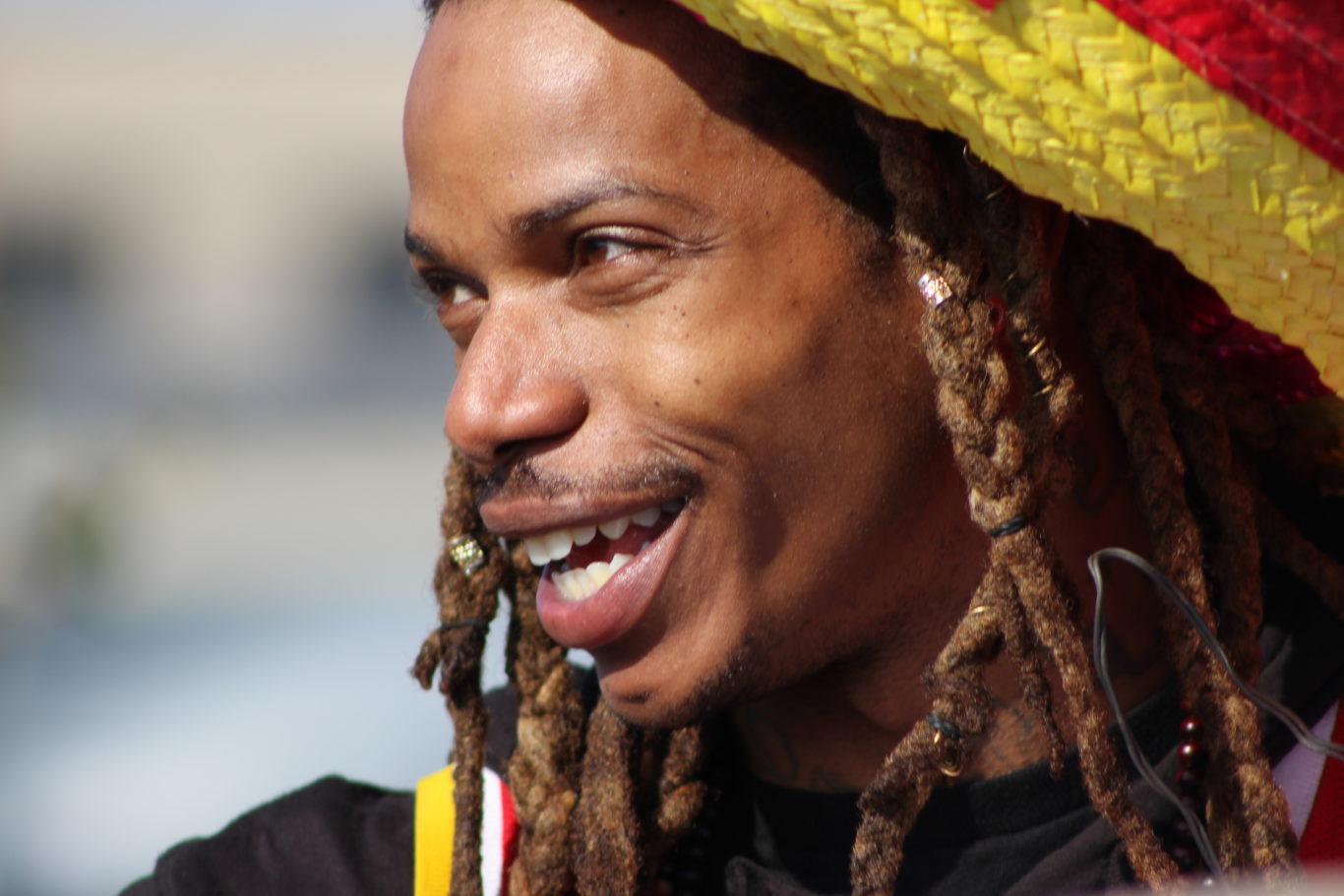 This Fiesta involved many prizes, including cash, a large legalized cannabis cigarette, a sombrero, and a pinata (skates not included).

Gumby took home the Ballaz trophy, one meant for those who ate the most shit with the biggest grin. 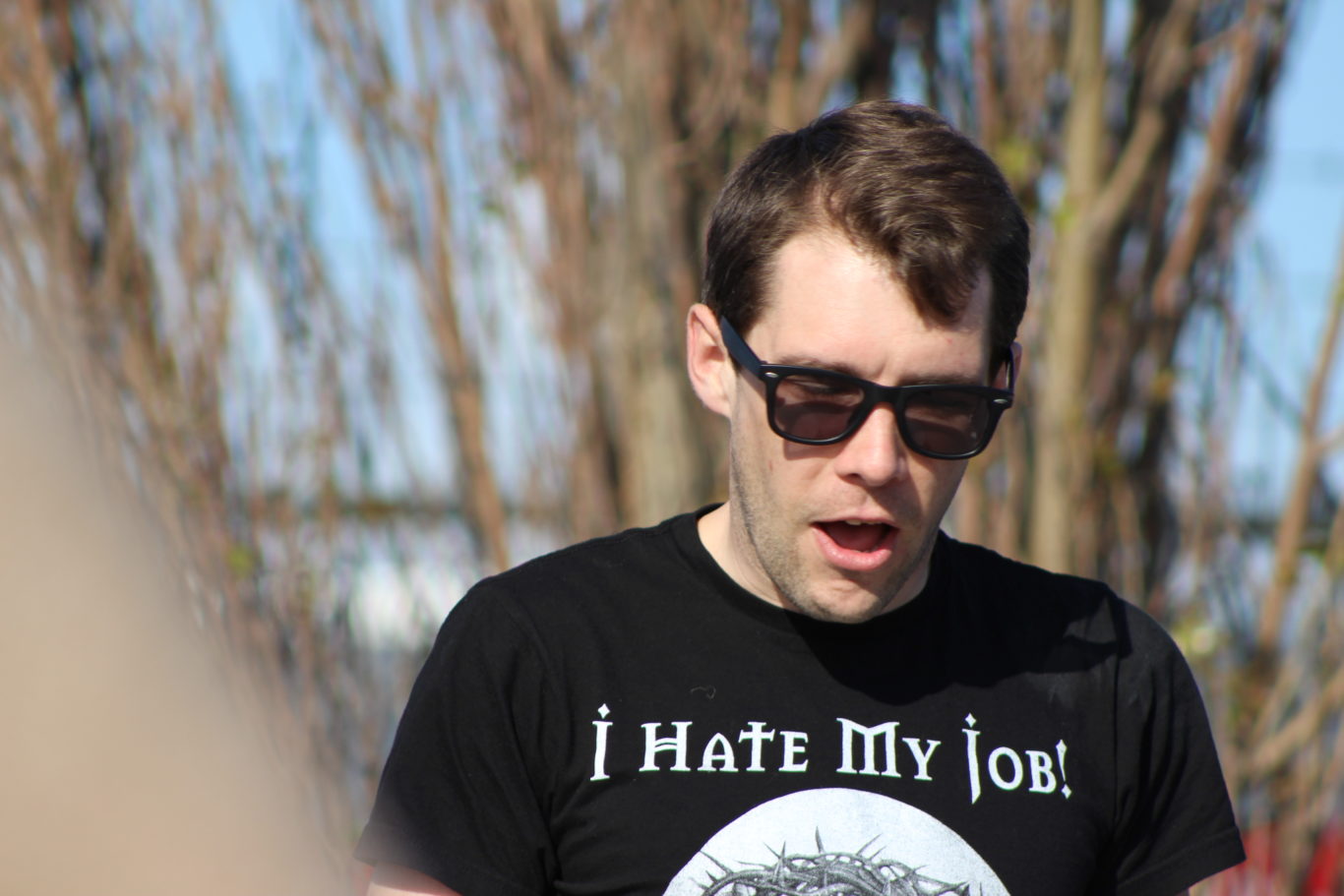 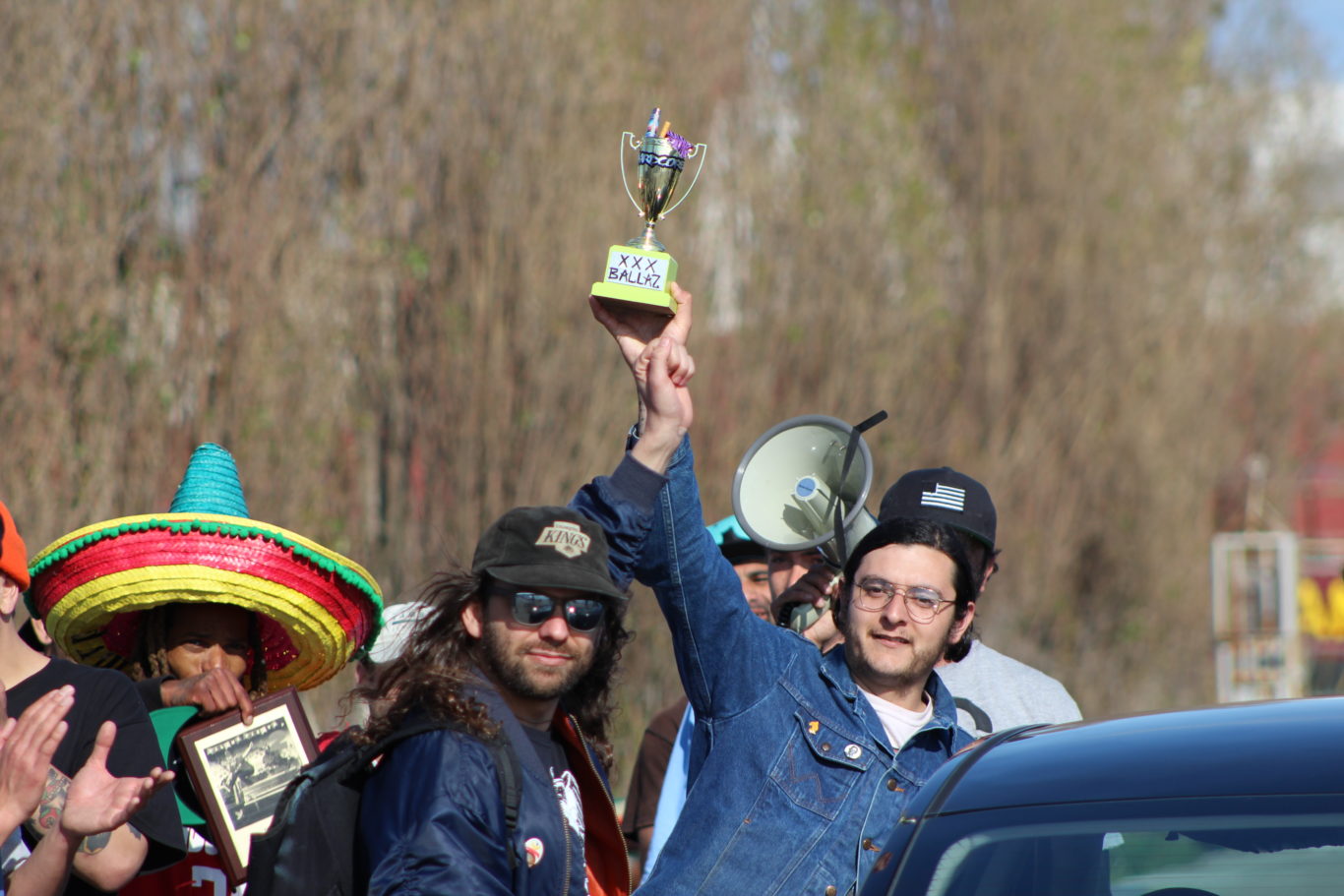 I, personally, closed out the night with some of my JSF familia, in my neighborhood, and the last one I lived in, hours after driving across the Bay Bridge with a launch ramp strapped to my 2003 Subaru Outback as me and the new MVP — Mr. BFree — both went back home to Oakland, taking the first onramp and first exit from the Bay Bridge.

I got these photos, these memories, and a ‘loaf out of it. Best job I’ve ever had.

I’m told you should come have some fun with us in October, when the next Fiesta’s going to be that much more filthy. 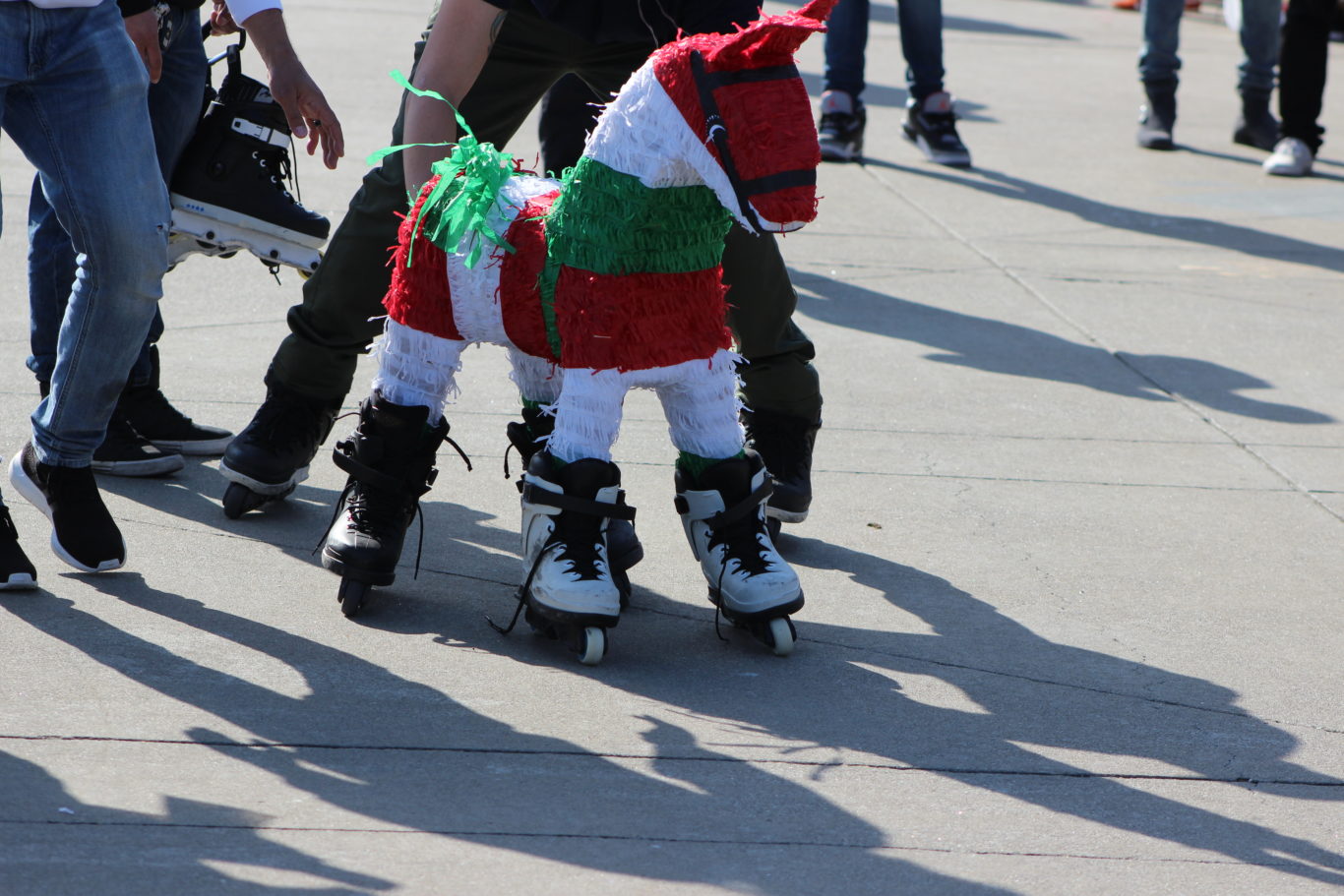