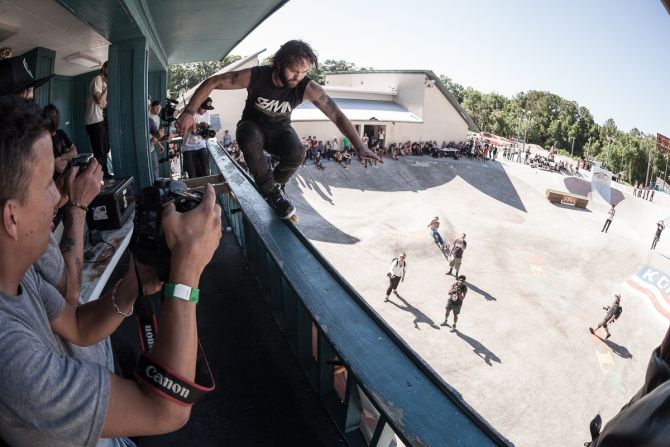 I vividly recall logging into instagram the Monday following the BCSD.  I for one was not very surprised, nor that upset when I ran across Daniel Kinney’s personal instagram only to see that the inevitable had taken place.  The thirteenth Bittercold Showdown was officially the last of the contest.  I had a moment of silence for the efforts put into the contest over the years, reminisced on a few bright moments in my personal experience, then gladly unfollowed the guy.  My attention immediately was wrapped around the ideas of what’s next.  What about the competitors, participators, the parties, the tradeshow?  But then my heart settled when I realized Jacksonville was only a matter of months away and where better to focus rollerbladings efforts that on our own southern territory.  Besides, who really liked all that driving and snow in the first place.

Preparation was typical, even lighter than usual honestly.  The more contest hit with southernscum and the doods the easier this whole van life is becoming anyways.  I was greeted by Doug Williams, my brother Brad, and a couple other guys at The Nashville Blade house around 11:00 pm Thursday the 2nd of May.  From there we packed the van, magnetized bud light emblems to form an anchor on Julian Mire’s Volvo, filled both The Van and car full of SS doods and powered our way to Atlanta Georgia to pick up the rest of the pack.

We pulled into Atlanta way too early in the morning.  The coffee was wearing low and the cloud of stale smoke and spilt booze in the back of the van was already getting to me.  I was exhausted, everyone already was.  Carson Starnes as always had already equipped his living room floor with comfy items galore and formed a giant pallet.  There we anxiously managed to catch maybe two hours of shut eye.  Only to awake to a structured movement of myself and all my best friends, casually cleaning, twisting up, eating, and packing the van with in a matter of minutes.  It really is a sight to see happen.

Onward south we plowed through miles of sunshine and mountain views. It was a bit of a challenge with so many people crammed into one vehicle. That was manageable as always though. It became rather challenging to make the long ass haul with zero pit stops and persistent cruising with no cruise control. But also, that was okay. The number one challenge to the trip was the fact that it seemed to be HURRICANE SEASON. Imagine steering this  2 passenger van with 9 of your best buds in the back like sardines, slammed with inventory, bags, skates, beers, food, a new coffee table. The steering alone is already a challenge. The straight line winds swaying the top heavy beast did not seem to help my self induced paranoia and the ass whooping nature had to offer.

The good news is that we made in one piece. Laced our 5 star hotel (as always, thank you Carson). The bad news is that the rain was still at a downpour and obviously had no intentions on letting up. I was a bit nervous seeing that all of the doods are in prime contest shape and ready to make some noise.  Plus southernscum is my only source of bill paying now and rent was due the day before we left. Luckily we just so happened to be in the presence of our best friends, had managed to pick up Fritz Peiztner and just decided to pop some tops and go see what Jacksonville had to offer.

We caught some grub with Anthony Medina, Andrew Broom and our other new friends from Austin Texas, then  cruised up to studs strip club, the so called popping spot of The Pow Wow night life.  Not that we were opposed to seeing naked chicks, we were all just worn out from the ride down and ready to chill. We lightened the load with a few drop offs and headed back to the hotel.  Once arriving we noticed a happening little time right across the road. We decided it would be proper to get cleaned up and go have a drink. So, that we did. The only catch to the turn of events was that Doug made his way into the all black club. Well, the club we all decided to follow him into. No need for details of the rest of the night. I’ll just leave it at simply “drop down and get your eagle on girl / Whiskey and cokes for the group!”

Saturday came way to fast with no breakfast , a bad head ache, and more rain. In the fast pace excitement of getting to the park I managed to forget my favorite pair of Clark’s and all my food from my cooler in the hotel. I think it’s safe to say the day was starting off a bit rocky.

Pulling up to the park was a bit depressing. Surprisingly we were some of the first people there and the game plan to pull The Van into the skatepark for tradition did not look plausible. For your patience alone I wish this was where I told you all about the contest and the booth and the competitors and all the great things we expected to go down. But that isn’t the case at all. We were at a huge concrete skatepark surround by very little people that any of us knew and nothing but frustration in all of our eyes.  Luckily Oak City Skateshop and all of their guys had arrived.  We just did an in house shop stop with them a couple of weeks prior to that so we hung with them and set up a small table of product inside the skate park entrance. The rest of the crowd stayed distracted by Brad Anthony, Ben Weis, Julian Bah, and Joey Chase rollerblading some pretty silly obstacles in the pouring rain. Blake Taylor (the contest organizer) was still no where to be found.

Saturday was a bit painful and drawn out. We were in a destination vacation area and stuck in a humid ass skateshop with literally no direction and mixed feelings of going back to the hotel and sleeping the day away. Luckily hours later Blake had arrived and decided that that night we party. Rain or shine the next day, we make this contest happen. That is if enough people were willing to stay and participate. The doods and I knew our purpose and fell short of caring about our responsibilities back home. We hit up a local T.G.I. on Friday and went and got a couple more hotel rooms.

Carson Starnes, Chris Smith, and myself agreed a few months ago that we wanted to travel all over the south and get to know some of the other known crews.  We did a tour to Texas a few weeks prior to the contest, visited some people in North Carolina, and now it was time to get to know Florida. Obviously we had met most of them before but like stated above we are seeking out to gain support from the surrounding southern states so we thought it only proper to go to the Florida camp fire hosted by Blake Taylor.  Plus we were accompanied by the herben legend himself, so we knew we had to go.  There is absolutely no kind of regret to that decision either.  It was a long night full of good memories, loud laughs, and not enough beer to keep some people happy.  It was an honor helping build a massive fire with the Macon boys, Chris Dafick, Blake Taylor and the other local people.  It was such a treat getting to know all the Shredweiser guys, having some good times in the van and especially watching Doug Williams haul Bill O’ Neil ragdolled to the van.  He was simply blacklisted.  Not too much detail into that night, it was good times guys, thanks.  Seeing the Shred doods haul Billy away and hoist him over a 6 foot tall fence was better than any contest.  Pretty sure I developed new stomach muscles that night from all the laughing.

Sunday had finally arrived. It was a whole lot easier to get up this time due to the persistent heat of the sunshine blasting through the windows.  Everyone quickly showered and got dressed, slammed some coffee and beers. Then spliffed our way back down to the skatepark. What a sight to see it was. A parking lot packed full of four door sedans with back windshields covered in stickers. Tons of random people coming in and out of the shop walking, running, and skating to their cars and back to prepare to start the 7th annual Panhandle Pow Wow.

As you can see from the edit (s) floating around the internet it was nothing but a success. From Joey Chase’s best trick, to Carson, Chris, Dafick, and Cooley letting everyone know new leaders are rising, to Chris Marraco showing the crowd that the young bucks have plenty of O.G’s to still look out for. It was nothing but a treat. The southernscum booth along with Oak City Skateshop and the feel good feel guys were set up right next to the entrance door. Oso Boots, FID, and Shredweiser offered plenty of good stuff smack dab in the middle of the audience. The air was strong with sweet medication, noises of crack cans, and finally the ongoing umph of some of our industries best bladers shredding the shit out of KONA skatepark. Though it was Sunday and 90% of the people that were there needed to be at work in a matter of hours, but many hours away from home,  there was no rushing to leave.  Brad Anthony, Julian Mire, and about 15 volunteers participated in tearing down all the extra obstacles. We packed up our inventory and booth. Gave out hundreds of hugs and tap fist and piled back into the van.  Just as we were 48 hours prior, only this time a lot more tired, a lot more bloody, and a lot more satisfied.  It was nothing but smooth sailing all the way home.

As I stated at the beginning of the drawn out writing, BCSD is DEAD, The Blading Cup is alive yet so far away. The time for change is here. It is time for a new leader, to break away from the usual and really show this world what us southern boys are all about. Blake Taylor is in charge now, and southernscum has got his back. I am pretty sure I speak for the whole crowd that we all have his back. Take us to the top oh sweet Pow Wow. It is our turn to Rise. It is our turn to make the decisions. If you haven’t had the chance to participate in a southern contest then please do so.  The 4th annual A town stomp is only a weeks away. Texas Skate series is still going strong. But if only once a year you manage to live out of your norm and really want to see how rollerblading contest should be done, then please make sure you find time to visit The Panhandle Pow Wow. See you all next year!