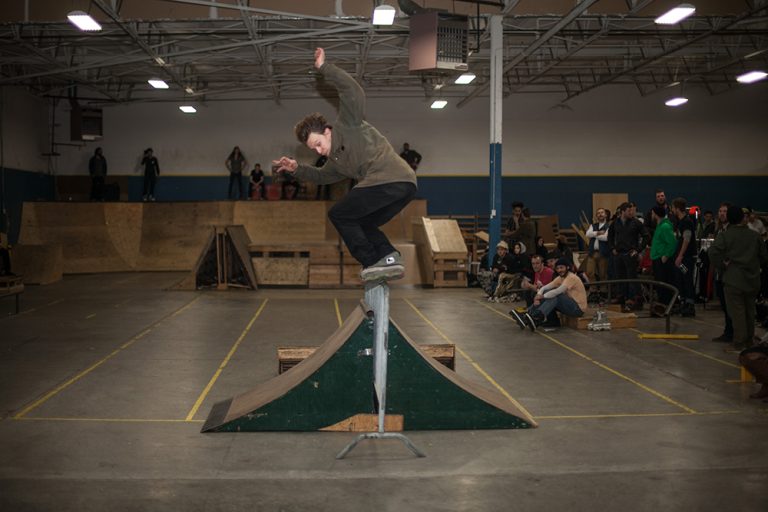 COMPETITION REPORT: TOO COLD TO SKATE OUTSIDE 6

Originally, the contest began in Nashville, Tn. It was still operated under the older event title of TCTBO. Though the name has changed, so has the location, and so has the day of the week. It is still a reason for a coast spread group of friends to meet annually and skate an indoor skatepark. It just so happens to be kind of expensive to participate, and the only person to get a pay out for skating, is the person determined as the winner.

This year I was able to pass the microphone (to Hawke) and pretty much all organizing responsibilities off and participate in the event. Which, I do not regret at all. Sure there were some snags, democratically. But for the most part, all the buds handled business and skating RIOT skatepark had never been more fun.

On site, was fellow lifer, Kyle Wood. I noticed him taking time to rip open the park a bit with his peers. But, for the most part he seemed to be widely active as a spectator, camera in hand. Plus, on the gram, his lyrics are really coming together. That’s why his perspective is the perfect one to read. I state this blindly, but his presence alone at the event deemed his photos and words worthy.

It’s a real treat to still be skating. Being able to meet with so many like minded individuals once a year to celebrate, is tight too. But, recognizing a leader evolving from a later state of local participation is nothing but inspiring.

Please, welcome to the screen Kyle Wood, with Too Cold To Skate Outside Six.

Let me start by saying I was in a car longer than I was at TCTSO, and it was absolutely worth it. I’ve been to three of these so far and it’s always a hype event. A group of us left Columbus around 9am to arrive at Riot skatepark in Louisville by 1pm. Many of us had never been to this park so there was a lot of excitement in the warm January air.

The park had some potential, but as usual for this event, you have no idea what was coming. I decided I wanted to skate and contribute to the prize pool, the park certainly looked fun enough. I got broke off on the tiny cemented practice rail right in front of Adam Bazydlo. Just my luck! Warm ups overall were very chill, competitors didn’t seem to show what they had planned for later. A good size crowd of about 60 spectators stood near the sideline of the skatepark.

The beginners set the stage by jumping off stuff and being the first ones to grind the scary jank rail setup in the middle of the park. Props to all of the beginners indeed.

So there were two 7-minute heats in the advanced rounds. This is where shit started to get wild. Pardon my French. Luke Naylor started the contest out with a giant disaster wallride to fakie his first trick out of the gate. Right away the energy in Riot Skatepark was shifting. People were starting to cheer and get rowdy. Hawke Trackler was also getting adjusted to the microphone. He was doing a hysterical job berating and encouraging people at the same time. From what I saw, the first heats were dominated by Adam Bazydlo, Brian Bruno, Garret Mitschelen, Grant Hazelton, Julien Mire, Kevin Lebeau, Luke Naylor, Mark Wojda, Matt Oz, Quintin Lamb, Ray Kronenberg, Stefan Brandow, Taylor Popham, and Zack Savage. Did you just hear all the names I just mentioned were skating their hardest to win a stack of money? Hammers were going off like a chain reaction, and the crowd was getting behind it.

The finals lasted about an hour! It was an open jam session style with plenty of time to get as many tricks in as you please. This year’s TCTSO reminded me of a street competition. During the start, the focus was on the center rail. Everyone got unbelievable tricks on that thing.

Garret did cab true soyale cab out and hurricane topsoul okay? Ray Kronenberg did 450 back backslide tap 270 to forward! Brian Bruno with all his classic true topsides. Honorable mention to Taylor Popham for his most gangster full cab ttp also on the launch to rail. And I’m sorry to leave out other people because there really were many other tricks on that level. Zack was messing around with the park in ways most were not. Big spins into grinds, flawless style, and consistency.

Half way through the finals the competitors i mentioned were doing well earlier just started destroying everything. I mean all of them had more lines and hammers than you could count with fingers and toes. It was amazing to watch. The park really had a few core obstacles but these guys were putting in work and battling for first place.

It was anyone’s game the whole finals! I think the decision at the end was based on Zack’s overall creativity and coverage of the skatepark. He also did a huge Fishbrain stall on a beam near the very end that helped him take down the W! To summarize, TCTSO is a welcoming, largely organized event that is starting to get a mini-bittercold feel to it. Minus the huge trade show, but who knows, maybe one day!!