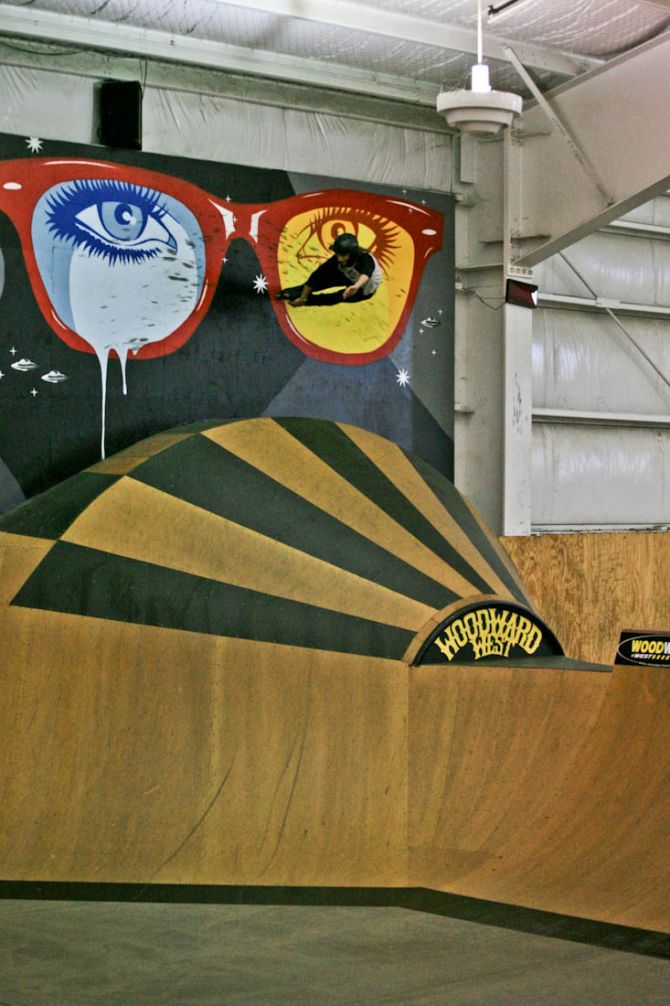 On Friday Woodward West was open to skate from 3pm to 10pm so I left San Francisco around 8 in the morning, picked up Ashley and her kid London (congrats on getting 1st in the kids division bud!), got some grade A coffee for the road and drove, drove, drove. We stopped in Bakersfield around 2pm to pick up a BLadie from Denmark at Intuition Skate Shop, said hello to Matt Mickey and in came the Asian invasion! Later we found out these guys aren’t playing around, they were in serious training mode and absolutely killed it all weekend! After getting Jazmin from the shop, we finished the last stretch to Woodward West in the BLadies Ferrari. Jazmin and I skated the bowl for a bit, met Angie and all the incredible Utah rippers… shout out to the Utah rippers! Oh my goodness, Chris and Tad, you took my breath away! In rolls Aarin Gates (AG), then Becci and more and more people throughout the day.

Friday night ended with lots of whiskey and hanging out on the hilltop, catching up with old friends, making new friends, liners falling out of the sky “liners from the gods!” under the perfectly clear starlit sky, all in all a crisp cool night.

Saturday morning involved: pancakes, mimosas, coffee and sign making. We made it early enough to support the kids comp. AIL was a long shred filled day. From the kids, to the vert, to the Utah Rippers, the Asian invasion, the BLadies, the ole men to the Elite… IT WAS AMAZING!

Joey Chase and I started what we thought was an impossible mission to find one Mr. John Bolino and we took on the challenge of getting him to go to the banquet. We found him at the pool house where we rescued him from the death grip of Dave Lang’s couch, he put on some Uggs and we all got to the award ceremony.

Matt Mickey is the #1 mic man with tons of whit and humor, but he also gets down to business.

Congrats to Becci Sotello for taking 1st in the BLadies division, lacing that 270 back savannah it was amazing! The girls killed it! A Big big pull to see SSM receive the award for skate team of the year. Since I moved to San Francisco in January, Shima Skate Manufacturing has been the highlight of the year; constant skating, filming, shooting photos, going on tours and having get togethers. They are doing great things and I see them all as an inspiration in blading and badass way of life! JOHN BOLINO! MAN OF THE YEAR!

After the banquet there were small parties all over the hilltop. A few Tehachapi local kids showed up and caused a bit of ruckus, I’m sure some stories have gone around, but shenanigans aside, this years AIL was full of talent. The awards ceremony was so well done and congratulations go out to Louie and Arlo as well! Richie Velasquez, thank you and thank you Woodward West for another memorable event, rollerblading wouldn’t be what it is without these events, good things are happening!

Just before we were leaving, up rolls a crown victoria, busting out a classic Neil Young tape from the cassette player. “The Mick” just keeps getting more awesome at every event, stay cool man!

In the end, I packed John Bolino and Joey Chase into the BLadies mobile and headed back to the bay.

Here are the results from this year’s contest. You can see a short video recap posted here.

*Update* Emcee Matt Mickey gave us an up to date link for a Brandon Smith photo gallery as well here. Take a look!

Beef of the day
Jeff Hamm

AIL Team of the Year:
SSM