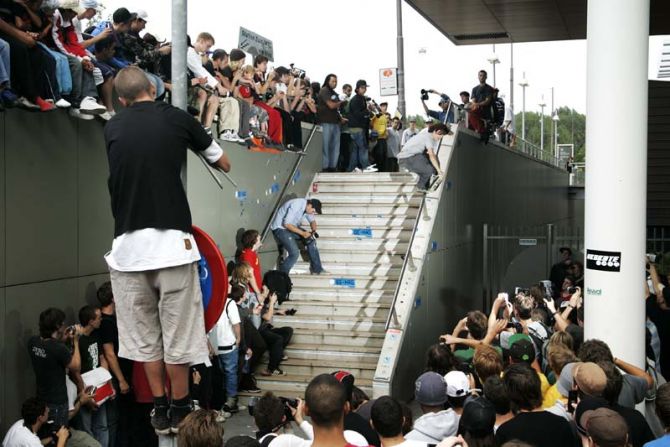 Would you look at that… Hundreds, hundreds of skaters!

The best of the best!

And zero, ze-ro girls. Unbelievable. Oh wait no… I think I see one. That, or someone’s lost a bet involving hydrogen peroxide.

Maybe the bet was: “Okay Nick, I’ll dye my hair blonde and wear a pink shirt to IMYTA+ but then you have to frontside torqueslide that killer deathrail of death”

Ah, the fate of the loser. To do something incredible yet be forgotten.

If you haven’t seen the sequence I guess this shot makes Benny look like an extra in Flashdance III, Flash on wheels.

Maybe he made the bet with himself…”If I dye my hair the color of feline diarrhea then I have to makio to transfer topsoul from the wall-from-whence-no-mortal-has-yet-returned over impossible gap and to the killer deathrail of death”.

Well, he won that bet.

This human being flying through the air is called a “Brian Shima”. Brian Shimas are usually found in warmer climates, but this fine specimen, found mid migration in Amsterdam during a gathering of eight wheeled human beings back in 2006, found his way further North than most of his Rollerbird kind. After his descent the whole flock of Rollerbirds cheered him on, eventhough the planned landing on aforementioned wheels did not entirely go as planned, the gathered Rollerbirds still showed their respect and showered him with praise and Heineken beer. Brian Shima, Migration 540. Briefly landed.

Bailes rocking a fishbrain, which was no doubt switched up to some other nice trick, as he is inclined to do usually. The bar was high, and even Bailey would be boo-ed off the curb if he did not bring it. Of course he brought it, and some more to spare!

Erik Bailey paid ’nuff attention to a certain mr. Jon Elliott while growing up blading, which he shows the crowd with a picture perfect fs. Torqueslide on the less lethal drop rail. Go watch Jon’s Brain Fear Gone profile if you don’t believe me. Even if you do, go watch it!

Lomax made a deal with the skating gods that day. The deal was that he was allowed to lace any trick he wanted, as long as it included an alley oop backside backslide. And so he did. Don’t see many people do that trick at all any more. Maybe he wore it out.

Do not think Benny won, or semi won this competition based on one trick alone. Nope, he also did a Sweatstance. A quick tip to any and all who might have the ambition of winning Winterclash next year, if you dye your hair in Holland’s national colour Orange, you stand a much better chance of at least ending up sharing first place.

One of many high points of the last Real Street contest that mattered, the Be-mag Drinking Game! Who won did not really matter, because no one really cared. Rollerbladers and free beer? Fast drinking is guaranteed anyway.

What we have here is a good example of first come, first serve. Not only is whoever this stylish motherfucker is doing a very nice trick on a very nice curb, he actually has room to skate it. Not more than an hour later the legendary Zuid WTC spot was overrun by probladers from all corners of the globe, who proceeded to skate this here ledge in single file. This was the most interesting curbskating ever witnessed on one slab of slick rock.

Jochen Schmuda looking very victorious after having downed a small beer in one go, not needing his crutches for the first time that day. There are so many legends in this picture, but not too much to name. Most infamous in this picture, Jon Julio ofcourse, that fat red neck of Amnon Klein, Be-mag OG Stuff, Jesse Ridder, Ron de Boswachter, Cosimo Tassone, Nieland, Dick Heerkens, Joe Coyne, Big Al and ofcourse Oi! Massive.

Erik Bailey doing what might be his favourite trick on a spot which was previously unsweatstanced. When he landed he left a dent in the pavement. Ofcourse he got severely one upped when Slomax added a 270 bs Backslide to his trick.

Azikwee crowning a Half Dutch German, and a 100% Mancunian Englishman. I still think Lomax/Harmanus should have won! Extra points for Benny’s Orange haircut, staying true to his Dutch Roots.