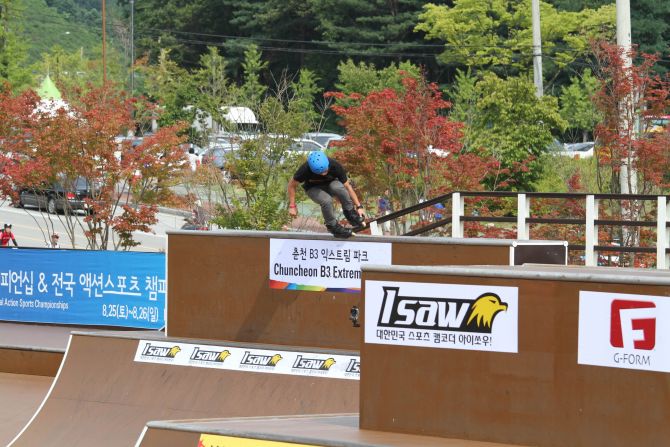 In addition there are quite a number of old (old as in retirement age old) dudes who treat photography as a full-time hobby, walking around nonchalantly with photographic equipment worth thousands of dollars on their backs. So, naturally, with a bunch of skaters like Brian Aragon,Yuto Guto, Worapoj Boonnim, Kirill Galushko and Franky Zhang flipping, spinning and grinding in a park, these photo-happy Koreans were snapping like crazy.

This was one of the main things we noticed at the second day of the Korea Chuncheon World Leisure Cup Action Sports Championships. Another striking thing was the music chosen for the runs. No, the music wasn’t bad. It was quite dope that skaters got to choose the song that was played during their 60-second runs, but it was kind of weird that the tracks were played entirely with swearwords and slow intros. In other words the hoards of Korean families out watching a nice sports contest on their weekend were unknowingly bombarded with foreign gangster rap and expletives which blasted out from speakers covered in plastic bags (to defend against the rain) that made weird rustling sounds from the bass.

Anyway, enough about the weird things and on with this update. The first day started out with a bit of your customary pre-contest rain. Luckily it was just a morning drizzle and the park dried up in time for the rollerbladers to get their practice on. The first inline event was the national (Korean only) inline park contest, but that didn’t stop skaters like Brian Aragon, Kirill Galushko and Franky Zhang, who did a few spins to test out the park.

For the non-nationals this was pretty much how the rest of the afternoon went, with mini-sessions going on throughout the day and a final practice held at the end of the day in preparation for the international contest that has been scheduled for sunday. Highlights of these mini-sessions included a chill box session with Yuto Guto and the Japs (effortless outspin makio to fishes), and a drop-to-foam-pit session with The Rollerman (aka Jean-Yves Blondeau ) dressed in gold ‘specially for the Asians’ (his words not mine). There was also a lot of chill highlights as well, with Kirill Galushko sipping on a coconut for a few hours, Chiaki judging with a smile, Red Bull girls, and a bunch of the Korean skaters dancing to Gangnam Style (if you don’t know educate yourself here now).

Although featuring only Korean skaters, the national contest was still of a fairly high level and there was a good amount of swag on show, with some lofty 540’s thrown in alongside a few tech grinds like a nice disaster 450 back royal up and out from a bank. The international practice of course went off as well, but it was held later in the evening and thus the super-smooth skatepark began to suffer from condensation caused by the humidity and it became slippery as ****. Still, the 20 minutes of practice before the wetness took over gave everyone a chance to see what will come tomorrow, with Aragon busting out his signature cork 900’s, Guto lacing massive buttery smooth 540’s all over the place and Worapoj being as stylish as ever.