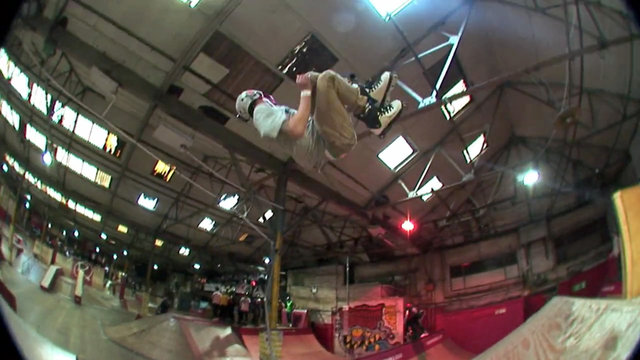 Edit and write-up by Jordan Maders

Over the years people have said Rampworx can be a place that lacks the atmosphere of other competition. Not this time around. I can honestly say this was the best event I have been to this year as it wasn’t for a bunch of drunk skaters chanting and dancing. I don’t mind drunk skaters, but this time it was all brought on by the energy coming from the competition.

There where so many highlights to the day and a few bad injuries, like Nick Lomax had a collision with Clayton Myott which sent the favorite Lomax to the hospital for x-rays on his ankle. Thankfully Lomax is ok, no operation was needed just 4 weeks in a cast.

Highlights wise Elliot Stephens was sending a clear message to his sponsor Valo to why he should be the first EU pro with a skate to his name, with him consistently throwing disaster 450 back savannah, hurricane top acid and the main one everyone is talking about – disaster 540 true soul. All on a rail.

It wasn’t all about Elliot as Julien Cudot was being a machine doing tricks without people realizing that he just 540 far side true top acided on the A box. With all of the crazy tricks Julien dropped the one to see in the edit is his backflip 180 from the top of the roll in. This gave him the win for best trick and showed everyone why he had won his 2nd Chaz Invite.

Everyone skated really hard and set a great pace and atmosphere to Liverpools Rampworxs, keep you eyes on Be-Mag for more updates!