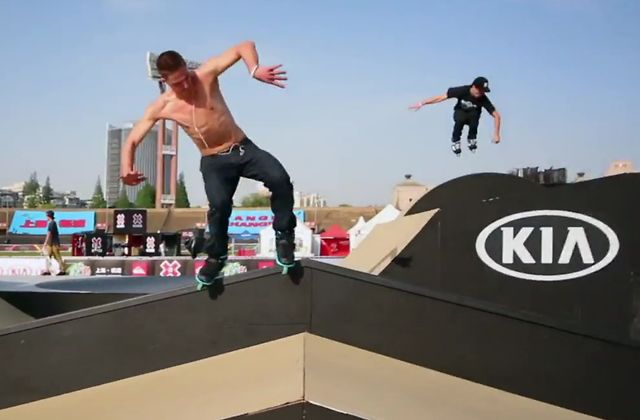 The rolling officially started Friday the 27th with the park being opened three hours for Inline practice. This was the first time we would all gather at the course and there seemed to be a collective, ‘What the fuck?’ when everyone was let on the ramps. The transitions were peculiar and the elevated platforms the park was built on had unusual bounces to them, but after about an hour you couldn’t tell anymore, and the lines were flowing from the likes of Jeff Stockwell, Killa Kai, and Diego Guillod. Diego showed up to what would be his first, and the X Games last Inline competition for a while. It had always been a dream of Diego’s to skate in the X-Games and with Asian X discontinuing Aggressive Inline, he knew it had to happen now, so he flew in from Geneva and made it work; successfully taking home ninth place, five-hundred US Dollars, and more than a few pairs of fake Beats by Dre headphones in the process. Practice was sunny and the mood went from reserved to joyous as each rider got reacquainted or introduced to one other. Sochiro was boosting around the park with his silent assassin partner Yuto Goto, while Chris Haffey, and Pascal Morasse-Raymond made it obvious why people pay to see them skate. As the comfort levels rose, 360’s evolved to 720’s, and X-Games Inline was underway. Late in the afternoon Worapoj Boonnim aka ‘Note” showed up to get his time in the arena. I always admired ‘Note’s’ attitude and previous online exploits throughout the world, but more recently via The Powerhouse. He style brings a harmony of big stunt skating, balanced with technical footwork. It was a pleasure to hear him share the stories, in more words than I will, about how hard he was pushed by Dominic Sagona to skate USD and progress to the level he is now. You could instantly tell he was going to have a good weekend in Shanghai which he eventually did capturing 3rd place and a couple thousand US dollars. In one of the more unpleasant stories of the weekend, his good friend and hotel mate snapped his collarbone killing it in BMX Street. We all wish him the best of luck – that x-ray was uncomfortable to look at. The mood of the entire event was a lot more laid back that I had anticipated. The first day we simply walked through an open gate and strolled right up to the course mid-skateboard session. Warm-ups provided one of the more diverse sessions you could imagine, with new Chinese riders able to shred along side seasoned pros from across the globe. The practice course mine as well have been open to the public. Warm-ups for semi-finals were bright and early on the 28th. A nine a.m. start had everyone meandering in and lazily grabbing for the unlimited neon green Chinese Mountain Dew. The semi-final was laid out in a jam format sectioned off by heats and everyone got five to six chances to hit the course within their heat. The competition began with twenty competitors and by the end of the day, only the ten finalists remained. Thinking back on the prelims all I can really gather is that too munch Mountain Dew make’s you feel like shit, and Yuto Goto can kill any and everything he sees. While the other Pros were tossing around 360’s and getting the feel for the course, Yuto was smashing 540 transfers and wearing steezy cardigans. It was blatantly obvious why he qualified first with a run score of 85.00. And while I’m not going to say I understood how the event was being scored, I can say that they did a damn accurate job of it. The competitors and onlookers were not the least bit surprised by how the finalists were stacking up. The fact that the top four from last years comp got an automatic bid left a little to be desired from the semi’s, but there wasn’t a damn thing to complain about.

Now if you know anything about large groups of international rollerbladers, you can be assured of one thing: If you organize something together, you will be doing a lot of waiting. Whether it’s deciding on a skate spot, diner location, weed vs. hash, or almost anything, a language barrier and different personalities will have you sitting around. Add to this the difficulty of international phone service and your going to be on your ass for a while. We finally got gathered for dinner after prelims only to see us mobbing around shanghai with full backpacks and skates trying to figure out what the hell to eat, if we weren’t waiting, we were searching. It’s the way things went all week.

Now at the end of the semi’s we were all left we the impression that the rankings heading into the finals were going to be the final standings due to imminent rain in the forecast. So when we woke up on the 29th to drizzle we all just assumed the finals were canceled. Luckily, a couple of hours and a little more sun light later our X-Games escort Eric Chueng got a call from event organizer and all around good times guru Chris Fowler informing that the course was being wiped and finals were a go.

The course was in perfect condition when we arrived and the overcast made for good shooting conditions. The format of the finals would be the same as the semis, just another eight thousand dollar first place park session. I was initially impressed by relative unknown and bearded South African Chris Van Der Merwe. While I had missed most of his earlier runs, he charged at his first finals run lacing 360 topsoules both ways, a stylie bio 540, and full cab back unity. Another unfamiliar I was glad to share company with was Kirill Galushko. This young Russian is already familiar with China (check out his Chinese street edit on youtube when you get a chance), and fared well in his first X-Games, qualifying tenth and skating well in the finals. However, it was the Pros and veterans, as usual, who created the best lines and the largest tricks of the day.

Had I not been wearing my glasses, Sochiro and Yuto would have actually been one person. With such similar styles, yet creative styles, these two carried speed and spun the way few other skaters did. I took Yuto’s 900 away with me as the biggest trick of the week and I stagger to recall an obstacle Sochiro did not at least 540 off of. I’m also having trouble recalling Stockwell riding forward on anything. This may either be due to poor short-term memory, or the fact that he didn’t. His Phillips sixty-six on the awkwardly placed KIA accentuated his clean lines and style. In the end it must have punctuated things for the judges as well, because as he put it, it enabled him to ‘take home the first gold in a long time’. The 2012 Asian X Games were officially over for us and I can truly say that all invloved were exhausted. However, no matter how great the finals were, you can be assured that they were merely an excuse to have the after party. I won’t get into much, but the highlights include and excellent yet somber memorial for fallen roller and Russian legend Andrey Zaytsev, Winter X gold medalist Kaya Turski, too much fake scotch, and that French girl who shot me down mores times than the Luftwaffe over the English Channel.

Special thanks include, Eric Chueng for all accommodations, Chris Fowler and his lovely wife for all the events and corresponding activities, the judges including Mike Opalek, Tory Treseder, Jon Elliott, Andy Critchlow, and Tracy White. Also Be-Mag’s official sound partner X-Mini, whom I personally saw distribute two thousand US dollars to aid in two riders accommodations and Revolution Skate Shop for supporting a scene that is partially responsible for getting me the opportunity to cover Asian X-Games 2012. Lastly Franky Zhang, for constantly killing it, driving me everywhere, and all the translating.