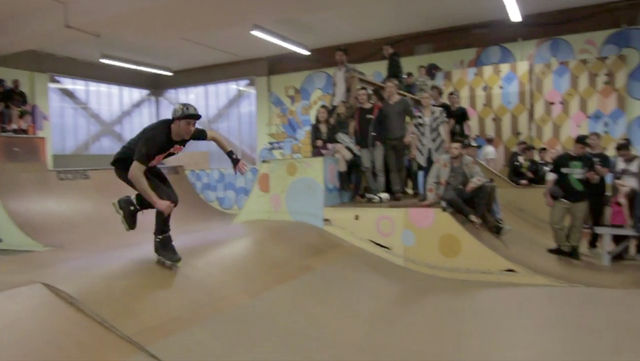 For the first time that I can remember, Jeremy Townsend actually showed up on time for his arrangement. Soon enough sign-ups were underway and competitors began warming up. Sometimes the way skaters warm up at contests just blows my mind, and usually allows for a good prediction of results. This event was no exception.

Juarez and Hornish seemed to be honing in on their hammers before the event even started, while LeBlanc flowed the park with incredible steez, making me even question why I signed up! Being a fan of the Mushroom Blading series, I was super stoked to see Todd McInerney, Leon Basin, Taylor Ritchie and a few other Canadian heads make it out. Feinberg made it out to judge, and as per usual at a northwest event, he destroyed the park during warm ups, reminding everyone he’s still king!

Before too the long the beginner division was underway and the groms showed everyone they weren’t messing around. Highlights included Blake Koszarek’s steezy makio on the pool coping quarter, Cody Aslin’s bump to 360, and Igor Ponomarev’s top acid on the tall box. Finishing it off with first place was Matt Simmons, Igor in second, and Blake coming home with the third.

Once the beginners were off the course the order of competitors for the pro comp were called out. Rob Inks manned the mic, while Feinberg and a few other Seattle OGs acted as judges. Realizing I was first up, I quickly dipped to my car for a shot (or two) of liquid confidence, then started the comp off. The great thing about this contest is that the skaters get both the competing and spectating experience, more so than a regular contest thanks to the turn based format. Unfortunately I missed my first trick so began to enjoy watching everyone else murder the park.

Juarez and Townsend threw down flips like it was an ASA event – fitting as both were ASA pros – while both Basin and McInerney executed tricks that I’m still trying to process. Chad Hornish was the obvious standout, with epic wall rides out of the vert wall to multiple grinds on the pool coping, and a few airs so high that his helmet almost grazed the hanging lights! Kevin Craig busted out an arsenal of gap to wall bonks, while Josiah Blee destroyed the pool coping with countless tech grinds. Once the finals rolled around, all eyes were on Juarez who pulled off an alley-oop Makio on a sliver of a ledge gapping back into the quarter, along with a sweaty on the bench above the channel gap, bringing the contest to a smoldering end.

Everyone that competed held it down, taking full advantage of the creativity that sometimes only a small park can bring out. The thirty somethings proved they can still hang with, and destroy the young bucks.