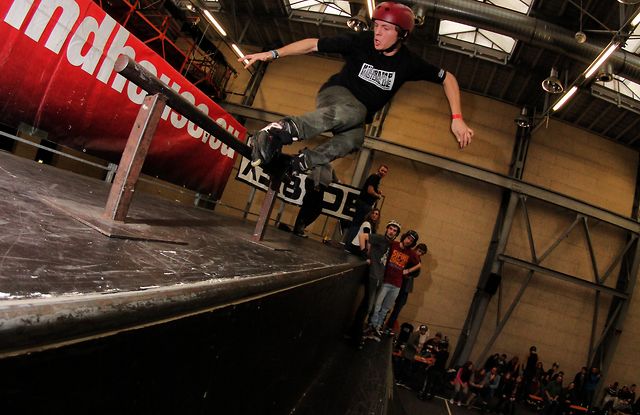 I arrived at the Abenteuerhalle and immediately ran into a lot of people from all around of Germany whom were helped members of the Skate Association Germany to set up the huge spine ramp. When it was finished a little session to test out the ramp started and we quickly realized that crazy stunts would be on display the next day.

After a short night, Alex Stock and I met with Marcel Fehren, one of the contributing videographers. We went on to check out the best spots for photography and filming. When we reached the ramp there was already a session going on with up to 30 skaters on the ramp.

The competition started at 2pm and riders were given 2 runs each before the last session with the 4 finalists. Frank Romeike, founder of the Skate Association Germany, opened the competition with some nice tricks, followed by the youngest skaters of the day, Mika and Nils Rinas (7 and 9 years old), whom laced some technical grinds and nice rotations.

As well as a different mix of ages, men and women were also mixed in the rider list. A surprising guest star was Mel Szalkai from England who put her very creative skating on display. I had never seen this girl before, but I found her style of skating to be very impressive.

When the runs were finished, the finals commenced. What that meant for me, was sitting on a tall, shaky ladder with a camera in hand. It was so hard to catch every trick because Jo Zenk, Jan Mertens, Dennis Schmidt, and Fedor Simonov laced one hammer after another. I have never seen so many crazy, clean switch-ups in a long time.

The level of tricks was growing continuously so Fedor, Jo and Dennis started to kill the sub box with 540 royales and other combos. Jan laced a massive McTwist, whilst Jo had a very clean 360 over the spin and I can’t even begin to count the crazy rotations Fedor landed.

After each trick, I thought; “This should be the end of the competition!” because of the craziness that unfolded below me. Someone would lay down a trick and someone else would come in and lace a harder one almost immediately.

For me, this has been an awesome end to the skating-year in 2011! Thanks go out to the team of Skate Association Germany which yet again organized the Miniramp Masters Series. I’m looking forward to next year!

Results for final event in Cologne