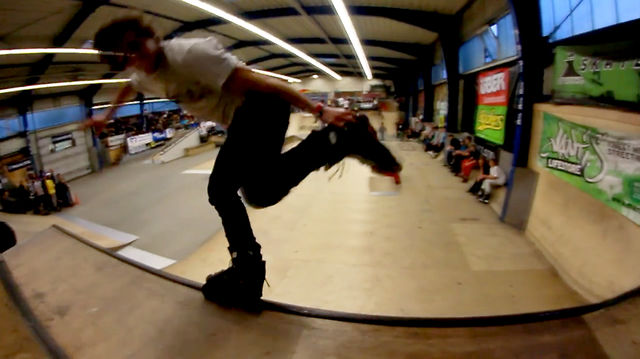 This year, it went back to its roots with an old format of having the prelims on Saturday and the finals on Sunday, which may have not been the best idea considering Saturday is recognized as the party day. Bladers who ripped it on Saturday were not quite living up to their potential on Sunday, as was the crowd that had shrunk immensely from one day to the next. Never the less, all of the spectators were rewarded with some quality skating at an extremely high level of competition.

The amateur portion of the event surprised everyone with a higher than expected level of skating. It was quite intense and you could see in the competitor’s eyes that the determination for a win caused each person to truly push their own limits. The feeling was so distinct that you could almost literally smell fierce competition in the air. It was indeed a pleasant surprise. Congratulations goes out to Eike Loest for taking first in the Amateur competition.

The Pro contest consisted of such high caliber that it was truly hard to judge who had taken the win. While being super friendly, just like with the Amateurs, there seemed to be a heated battling atmosphere brewing as every skater tried to impress the judges with all that they had. Each rider earned roars and cheers as they laced every big trick they could.

Due to the layout of the park, which was more oriented towards skateboarding, the competitors seemed to go with lines and big tricks simultaneously. This combination of approaches made the Pro contest unbelievably intense and the crowd ate up every single moment of it.

All in all, the skating was very diverse. Nils Jansons and Julien Cudot tried to impress the judges with lines that ran through the whole park, tackling obstacles that were frequently unused by other riders. Nils threw down some seriously burly tricks while Julien went more for the technical approach. Both were very aesthetically pleasing to the eyes. One of the biggest tricks was a perfect 1260, thrown by Stephane Alfano. Jacob Juul and Adrienne Anne displayed some super technical skating with Adrienne having a few goes at a disaster backside fastslide, which he managed to pull off after some wicked attempts.

One moment in particular that took the crowd by surprise was a huge flat spin transfer battle between Stephane Alfano and Jeremy Suarez, both known for their crazy spins and transfers. During a warm up session they decided to go at it and went from the bowl to an adjacent quarter pipe, lacing some of the craziest spin transfers the skatepark had ever witnessed.

Special mention goes out to the three local German competitors that ripped the park up and stood their ground amongst such a high profile group of skaters. Fedor Simonov gets a special style shout out for lacing the most stylish big spin to grind tricks that you would normally only associate with someone like Brian Aragon, taking the first place of the Pros, without actually being a Pro, on Saturday during the prelims. Unfortunately, his nerves got the best of him on Sunday and he was not able to maintain his position at the top. Sydney Hansen impressed us all with both big and creative tricks. A big congratulations also goes to Nils Jansons who won the contest with his all out attitude and big technical tricks.

And, of course congratulations to Melvin Siemianowski, the current German champion, who impressed everyone present with a “turn the heat on” moment. He wowed everyone with his last run lacing big tricks like a hurricane topsoul 540 out and a big bio 540 transfer.