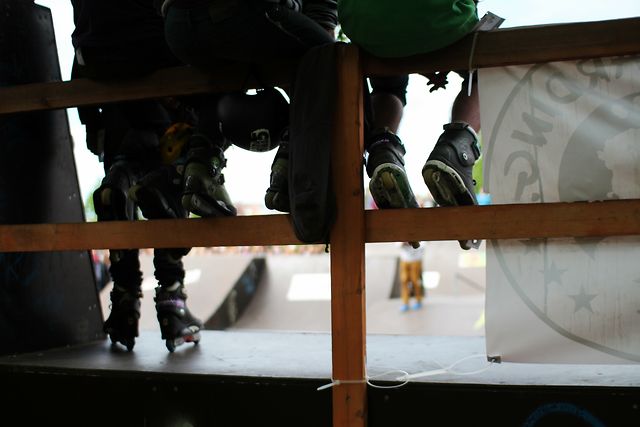 It took long discussions, but was finally decided to expend Karramba into two days outdoor event, which meant only one thing, more fun! The contest was split: qualifications on the first and finals on the second day. Besides it, there were plenty of other different activities on the field open to everyone. Trampolines and the special “Topo Technika” tent with different new video games were the best attraction for youngsters. Camera guys were all over the place shooting not only good tricks in the skatepark but also people who were chillin around and friends near Karramba theme wall. The ones who got hungry, could grab a snack straight from the grill, sit, chill out on the grass and catch up with their old mates. Our hair stylist Jovaras was ready to cut and style all volunteers, while blogger Karolina (Carolina Lion) was hunting stylish people for her personal blog. It seemed like, time has stopped and we were there to celebrate it!

The first day started with participants’ registration, warm-ups and qualifications. The weather was perfect for riding, so nobody was in a rush and the event took a slow phase with the surround of music. During the break, the whole action moved from the skatepark on the grass field, where guys showed tricking and free run performance. When qualifications was about to end up, suddenly the event was interrupted by the unpleasant accident. One of the best Lithuanian bmx riders David Budko got injured and emergency ambulance took him to a hospital. Such a crash could not go out without a consequence. Therefore, everyone was in a shock and this chaotic situation stopped the games for a short while. However, things needed to go on so qualifications were continued to find out who will go to tomorrow’s finals. The closing of the first day took at the beach next to the lifeguard’s station with the live free style performance by Jama & W. The late night was already approaching, so ones chose to get some good sleep before a long day tomorrow, while others continued to hang out at the skatepark.

The next day brought some good news, that David was fine and willing to give an extra hand as bmx judge for the finals. The finalists were announced, so the fun part had started! The event received even more visitors on the second day, who were curious to see impressive tricks and cheer for their favorite contestants. A little shower rain interrupted few times and scared to close the game, but everything went fine at the end and all of the finalists managed to do their runs. During the breaks, there were best trick contests for rollers and skaters and bunny hop contest for bmx and mtb riders. Lithuanian riders competed with other nationalities in the finals, which gave a good opportunity to see ourselves among international riders and thus gave more motivation to raise the bar for the next year. The winners were announced and both Lithuanian and Latvian riders were among prizewinners. After two days fully involved into the event, it was about time to poor out our all good emotions and celebrate for Karramba 6! The after-party was hosted by Monster Energy drink, live performance by Tie Gerseni, djs Kandy Killers and Rap Is Cool. The ones who managed to survive till the morning, continued with the after-after-party in the skatepark, sharing all memories and great feelings what they remembered during the last days and previous Karrambas. Cheers!

The story of Karramba 6 can be concluded by saying, that community matters! Without our friends and all the good people who took part in making this event, we could not celebrate it for the sixth time. Thanks to all of you guys! Loyal sponsors from Latvia and Lithuania gave good responses and are waiting for the 7th time to gather all together. We keep our minds open and already thinking what surprises to offer for the next year’s Karramba. See you there in Palanga!