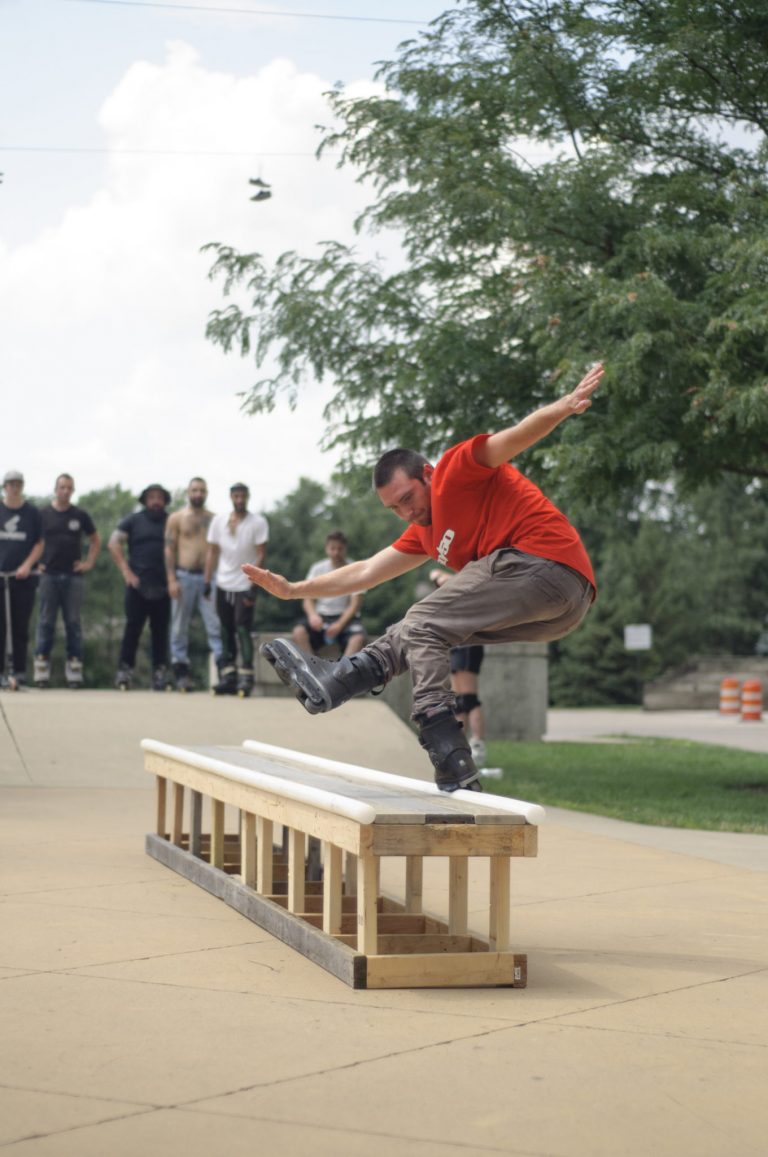 The Showdown Must Go On 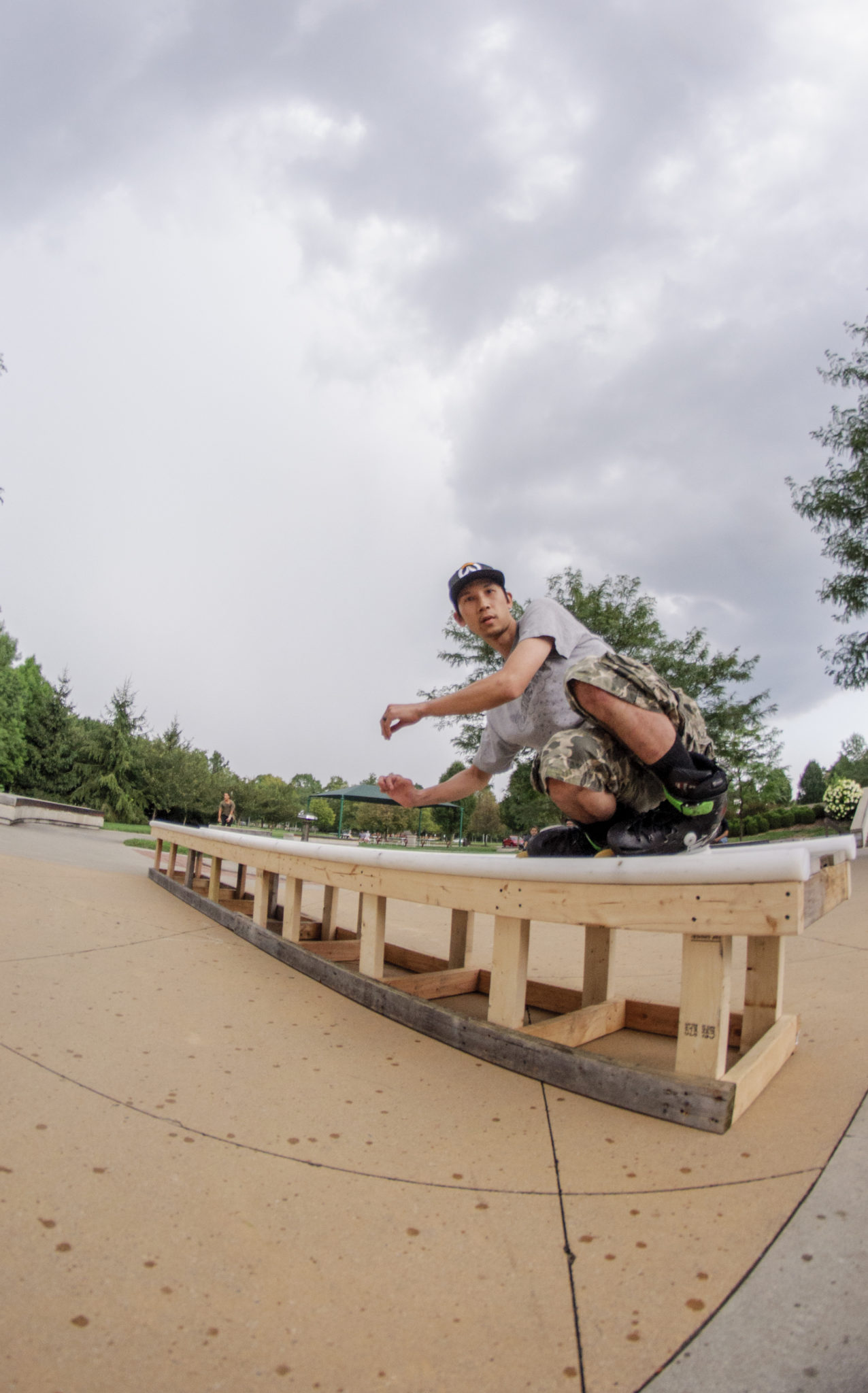 Outside rollerblading, Ohio is known as the heartland of ‘Merica that bleeds scarlet and gray.

Inside rollerblading, Ohio is a proven bleeding ground for talent. 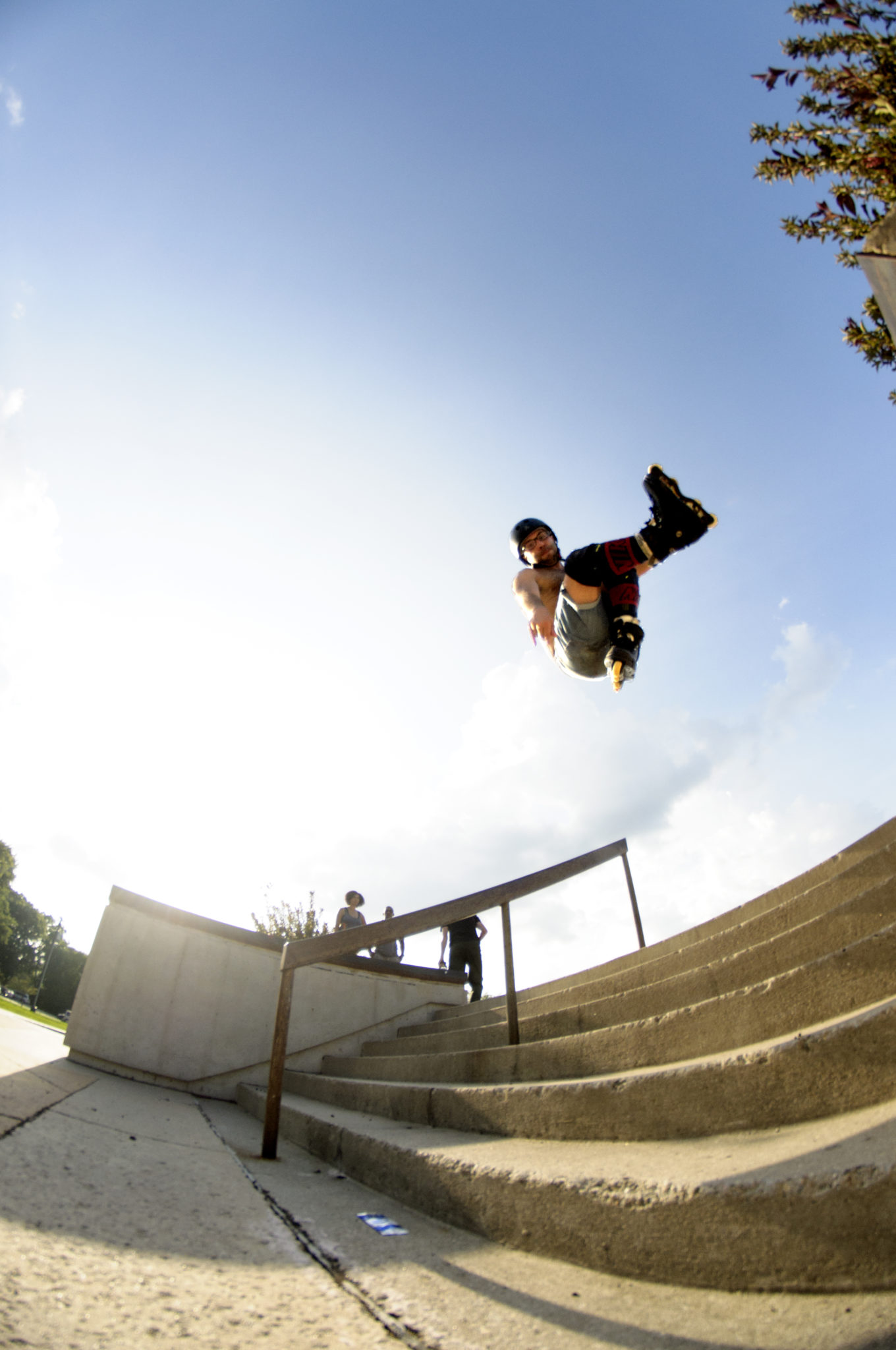 Legends from the great state of Ohio, in no particular order, include: Mike Opalek, triple-OG of Hoax II and Kill Team fame; Omar Wysong, Mindgame icon; Ben Schwab, Xsjado pro; James St. Ours and Ron Copeland, Norka crew members; and James Short (roll in peace), Xsjado, Deshi, and GC rider in whose memory the James Short Memorial Session was held in his hometown of New Philadelphia. 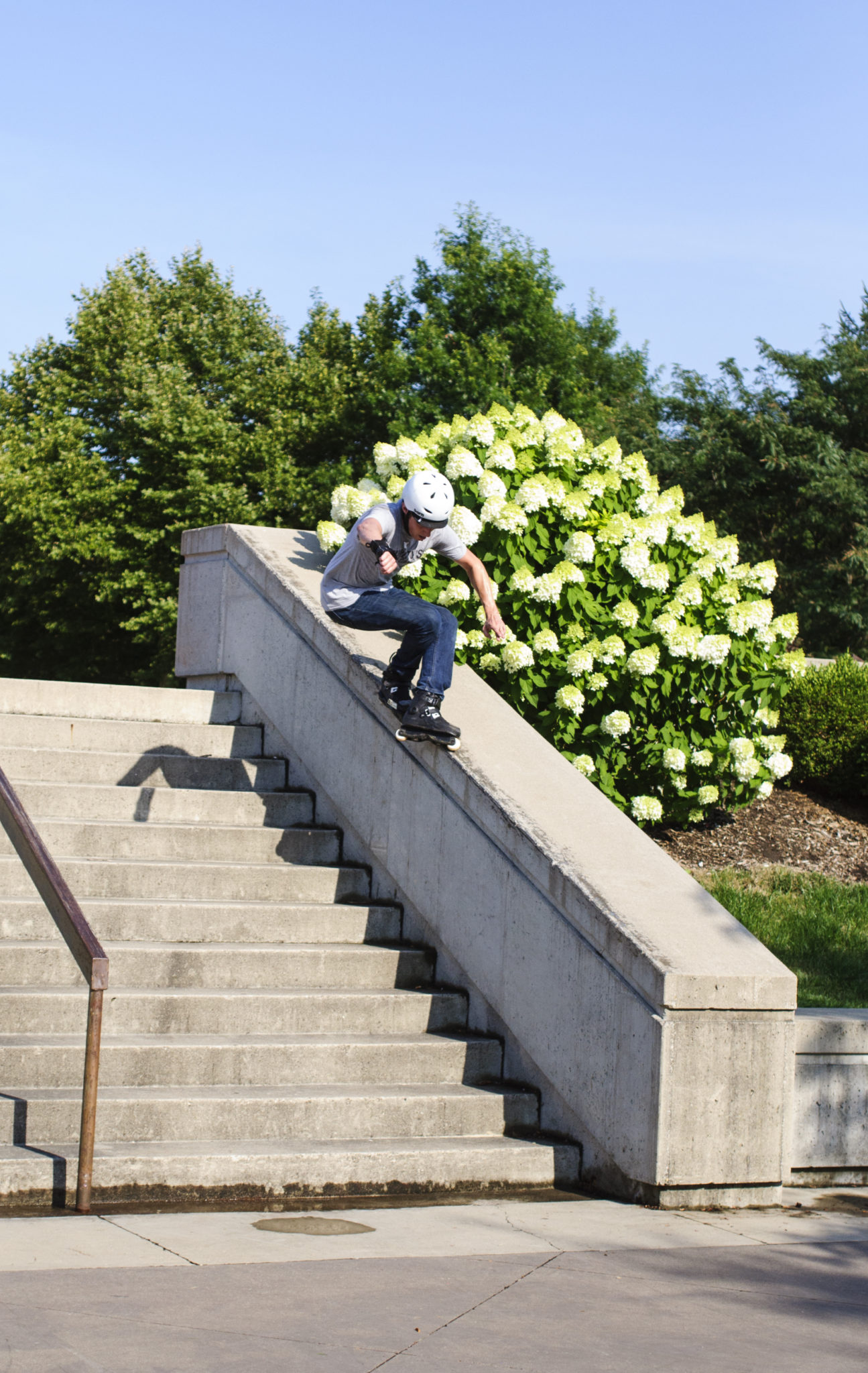 This past August 4th, in Kettering, Ohio, a suburb of the southwestern city of Dayton (hometown of aforementioned legends, Wysong and Schwab), the seventh Kettering Skate Plaza Showdown (KSPS) was hosted by local blader Ryan Benner.

The showdown is held at Kettering Skate Plaza, a public street-style skatepark with stairs, banks, flat rails, and ledges named after hometown skateboarding legend Rob Dyrdek. What makes the plaza’s ledges unique is that they’re topped with smooth concrete but have metal sides, almost as if the top side of an angle iron was removed and replaced with concrete, enabling near perfect lock for topside tricks. The city has recently started to refurbish the concrete where it has chunked. 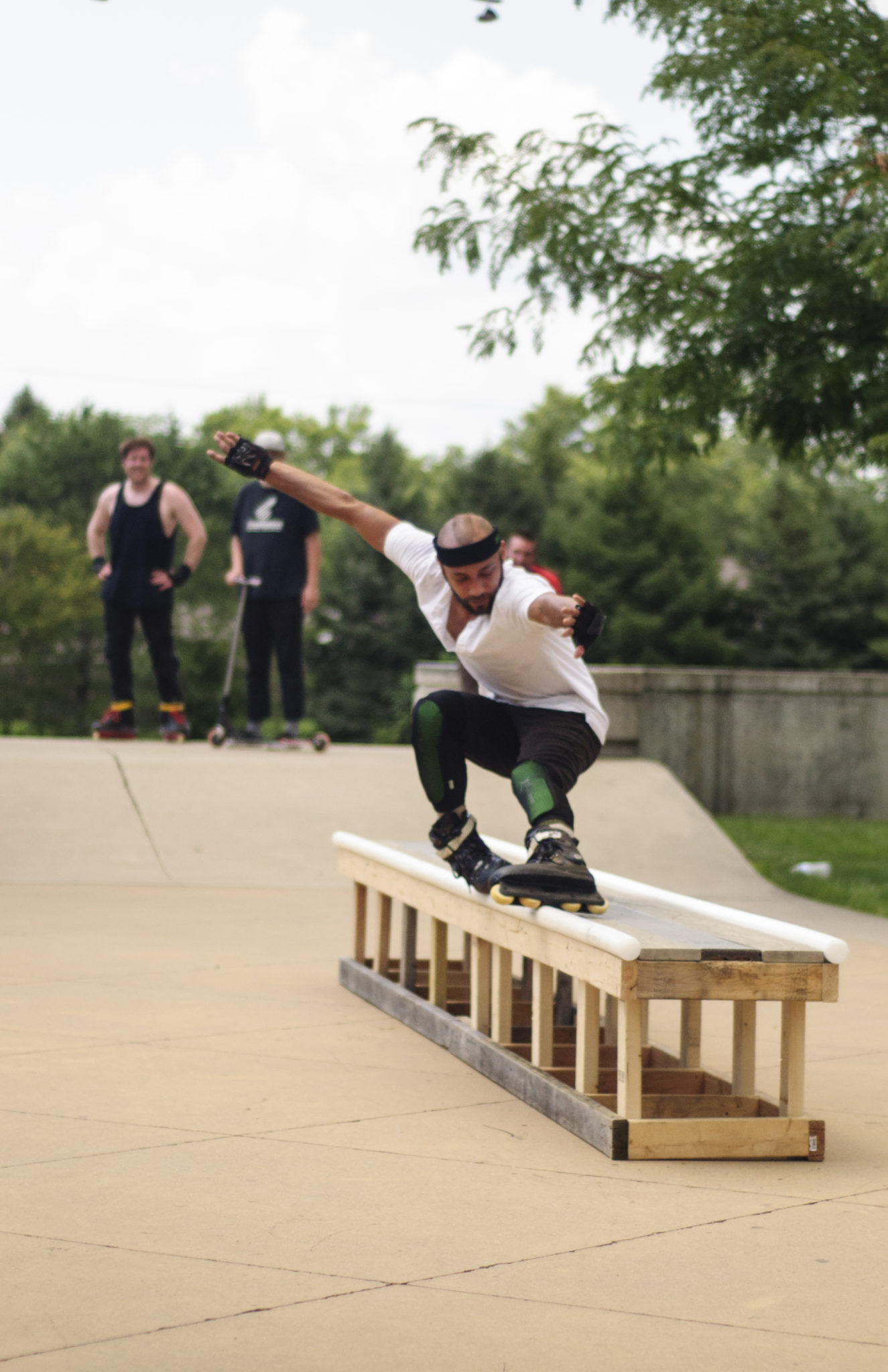 From 2008 to 2012, KSPS was an annual event with participation ranging from 50-100; the tricks were consistently huge, tech, and unique. Even though I only attended the 2016 one and this year’s event (because of a hiatus from skating), by watching the edits, I can feel the energy of the crowd and the passion and dedication it took the bladers to throw themselves down the intimidating 12-stair ledges. Here’s a list of each year’s winner with edit links (the break between ‘12-’16 was because the ledges were just too worn down): 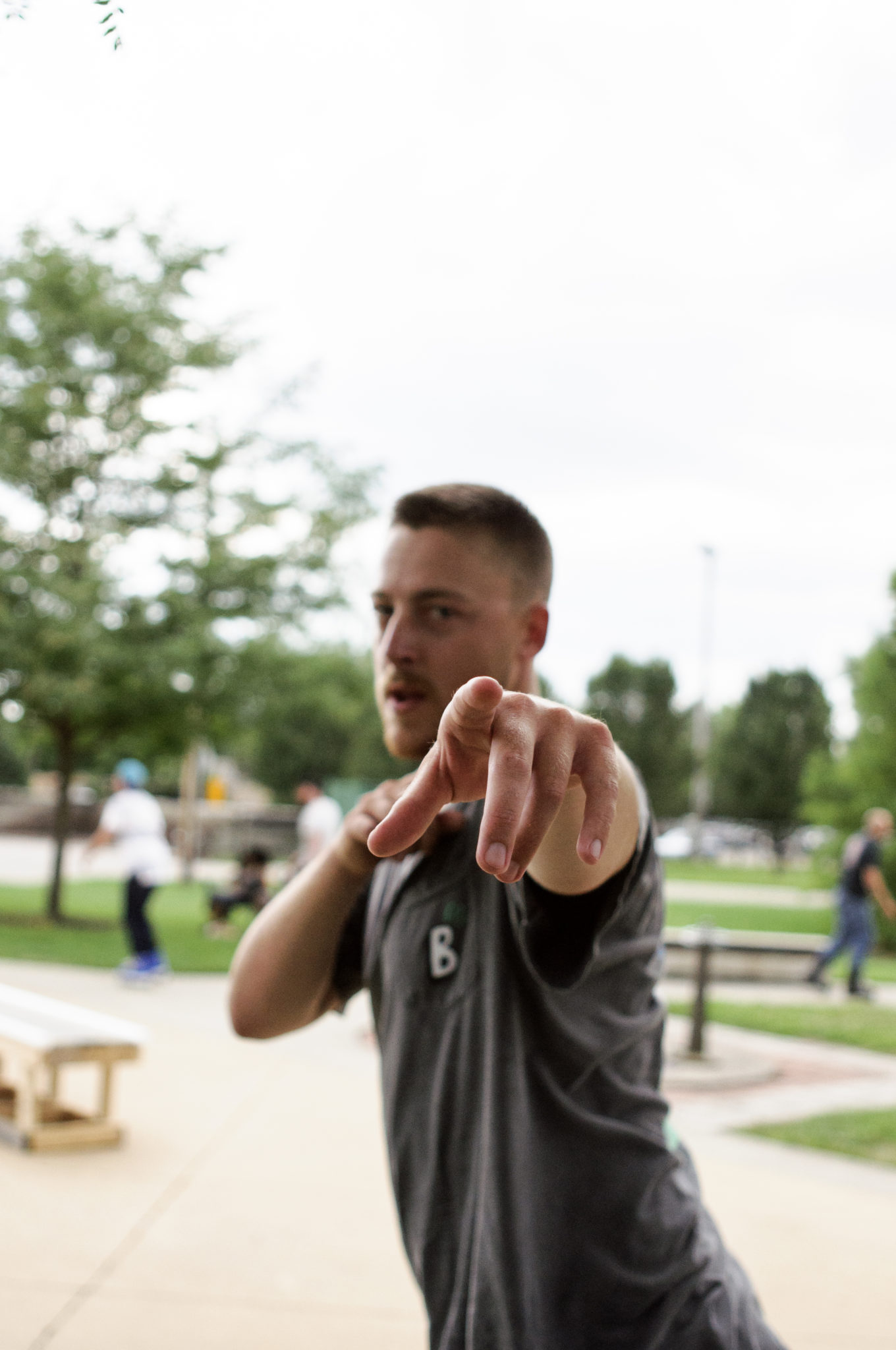 Since the first KSPS, the Southern Ohio blading scene has skated under the auspices of Ryan Benner who hosted the comps with his good friend, Andrew Thompson. 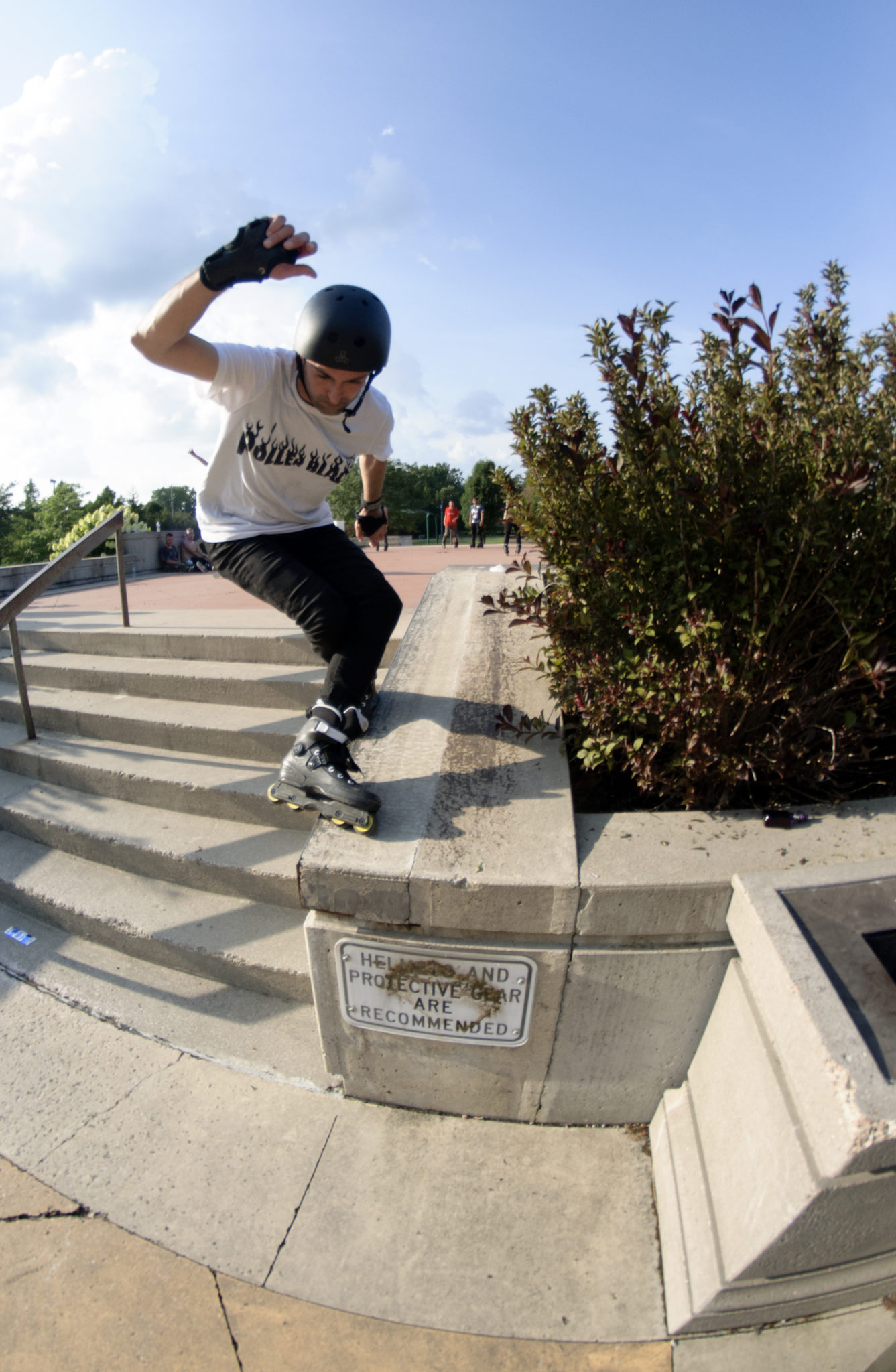 In addition to hosting KSPS, Ryan has filmed and edited six Savor the Flavor videos which, taken as a whole, earnestly yet unpretentiously document the evolution of rollerblading after its participation plummeted off the precipice of corporate profitability in the early 2000s.

While this year’s KSPS attendance numbers were significantly less, the roughly 50 attendees, including 15 competitors, were a fairly tight-knit group who fed off of each other’s creativity.

The only downside to the plaza is a lack of coping, so each year locals make a movable obstacle with coping. This year Cincinnati-area bladers Zach Cummins and Charlie Helm-Schneider built a beast of a shotgun box with solid UHMW coping, procured from Charlie’s folks’ plastic company.

Most of the competitors were 30ish, and while they definitely held their own, it was clear to all that three young guys were going to be fighting for the win.

24 y.o. Columbus blader Matt Lyon, who has attended each KSPS since ‘09, used his new found love of yoga to align his chakras and focus on making his tricks smooth and effortless-looking. His signature front torque was, as always, a crowd-pleaser, but one of his best tricks was a top soul up the shotgun box (when it was placed up long stairs) with a 720 out. 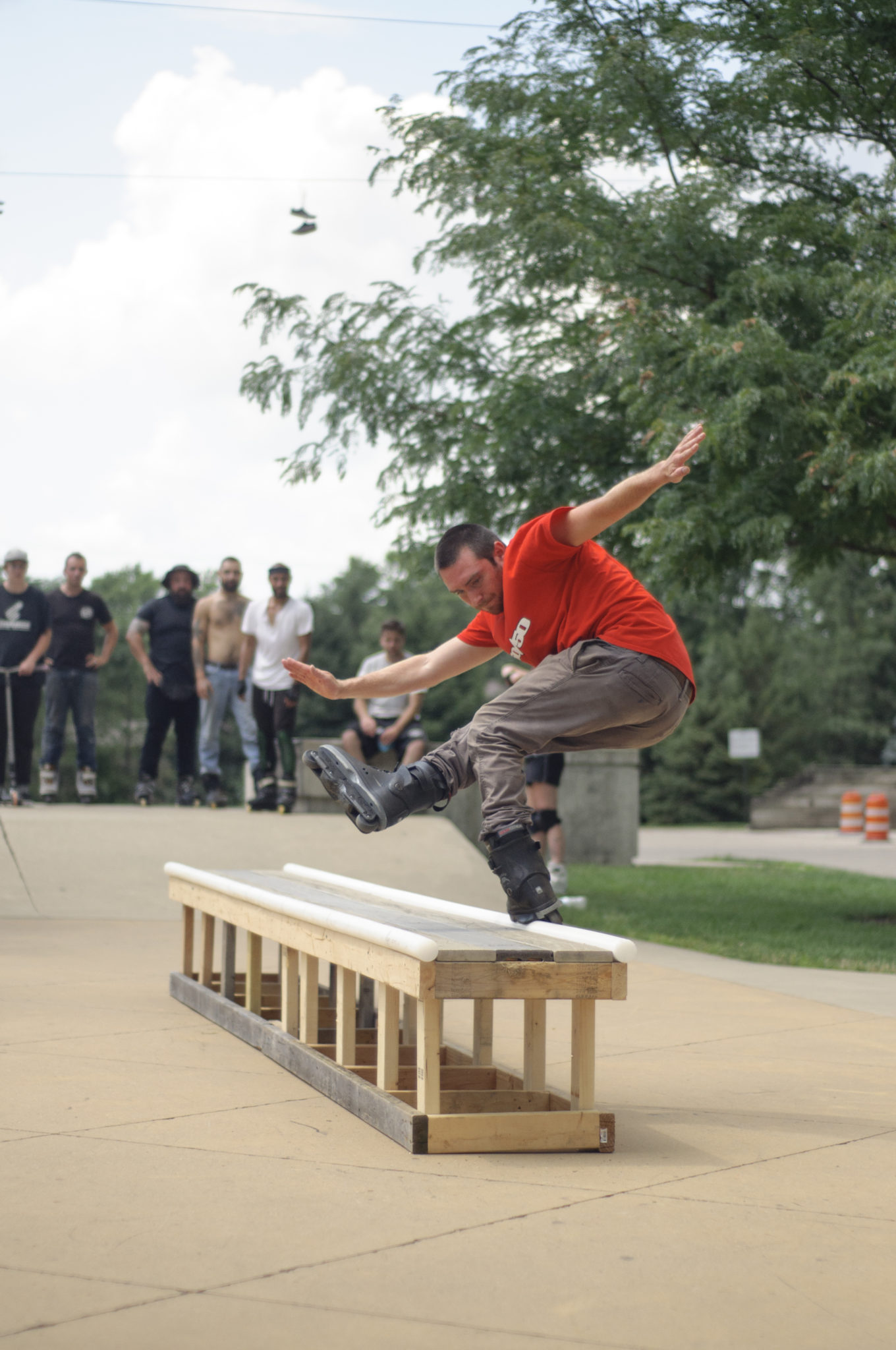 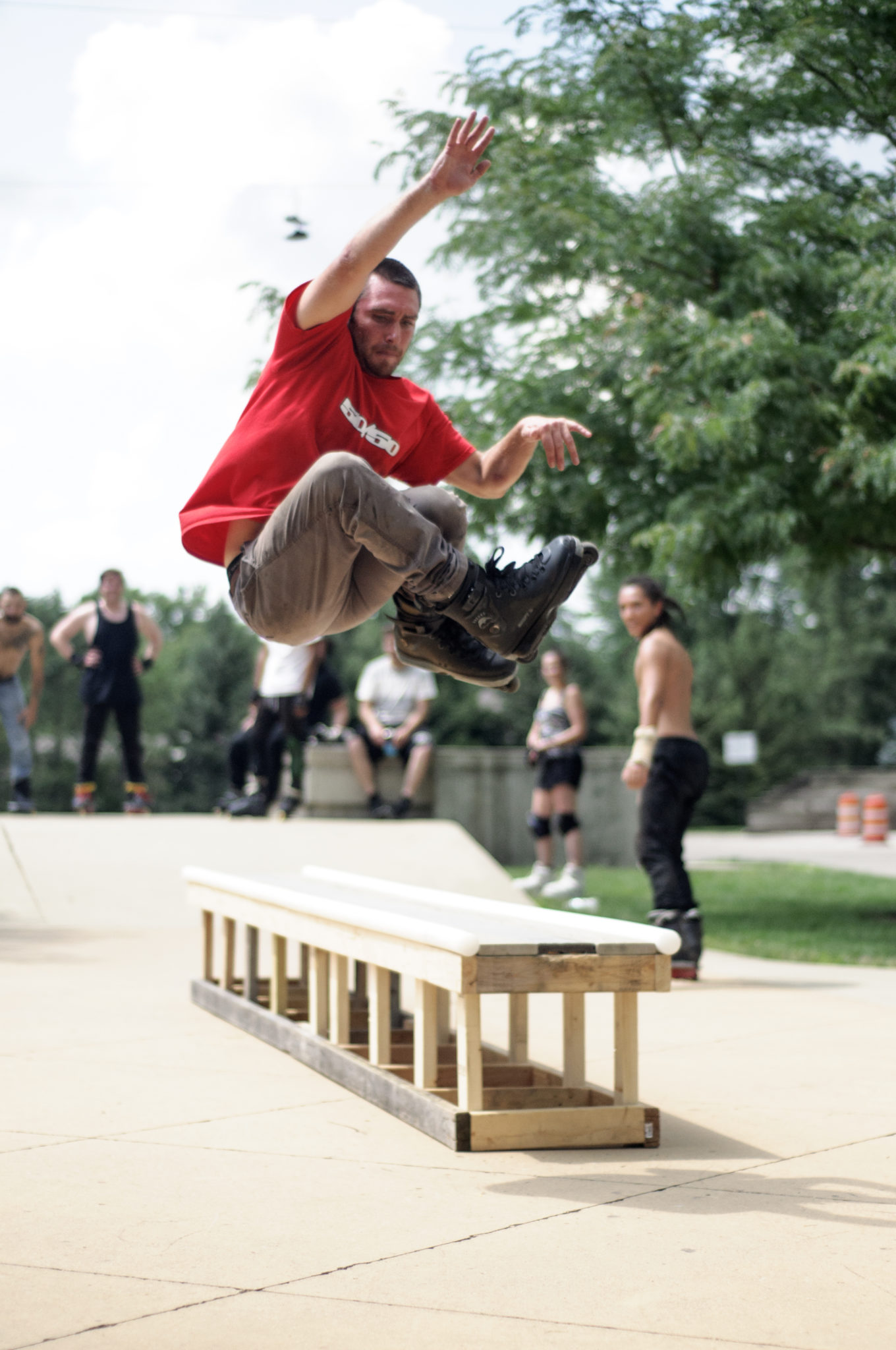 Jon Cooley – 540 Out of the Box – Photograph by Colin Batu

The 2016 returning champion, 27 y.o. Jon Cooley (Razors Am, 5050 Am, Apex pro rider, and Oak City shoprider), travelled all the way from North Carolina with Oak City Skate Shop owner, Long Ton That, who provides some of the industry’s best customer service. Despite nursing bruised knee caps, Cooley threw down his notoriously huge spins with steezy grabs over stairs and off tech grinds on the shotgun box, which was strategically placed in several spots. 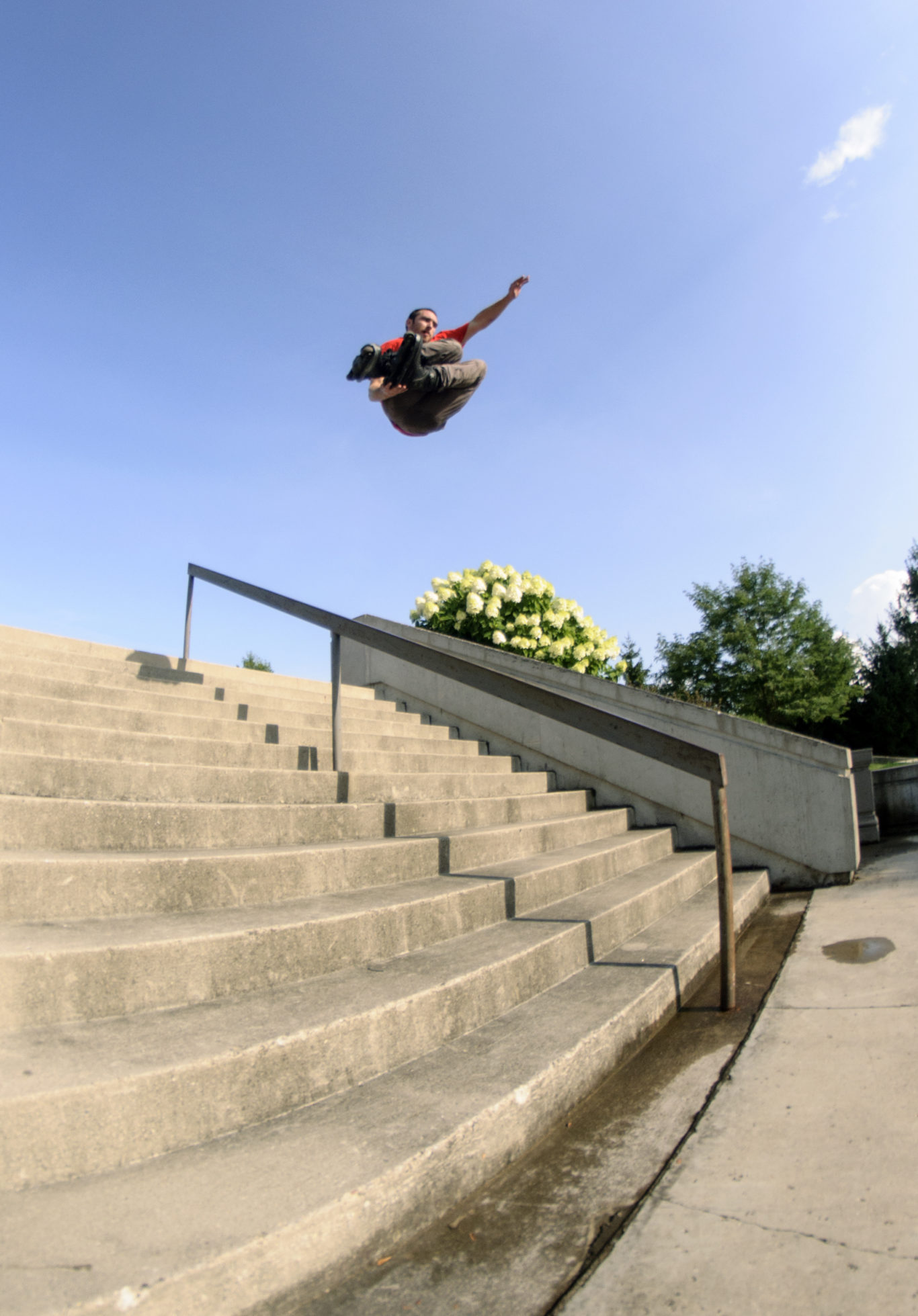 Last but not least of the young guns vying for the win was 22 y.o. hometown hero and heir apparent to a foundry fortune Reed Huston, who, as Ryan’s grom for years, has attended every KSPS. The W has always eluded Reed, despite attempts to sway the judges by remaining shirtless. This year his shirtlessness wasn’t needed; he kept his mind focused on style, especially perfectly controlled spins, tucked high but grabless. Reed seamlessly connected switch ups he had never even attempted before, including a tru soul cab to tru soul. His best trick was a back roy to tru soul on the shotgun box with a 540 out over a sizeable gap of long stairs.

After the judges—Ryan, Andrew, and Tim Sloan (Savor filmer and blader)—conferred, the top 3 spots were announced: Matt, earned third, and Cooley, second, while Reed got his first W! 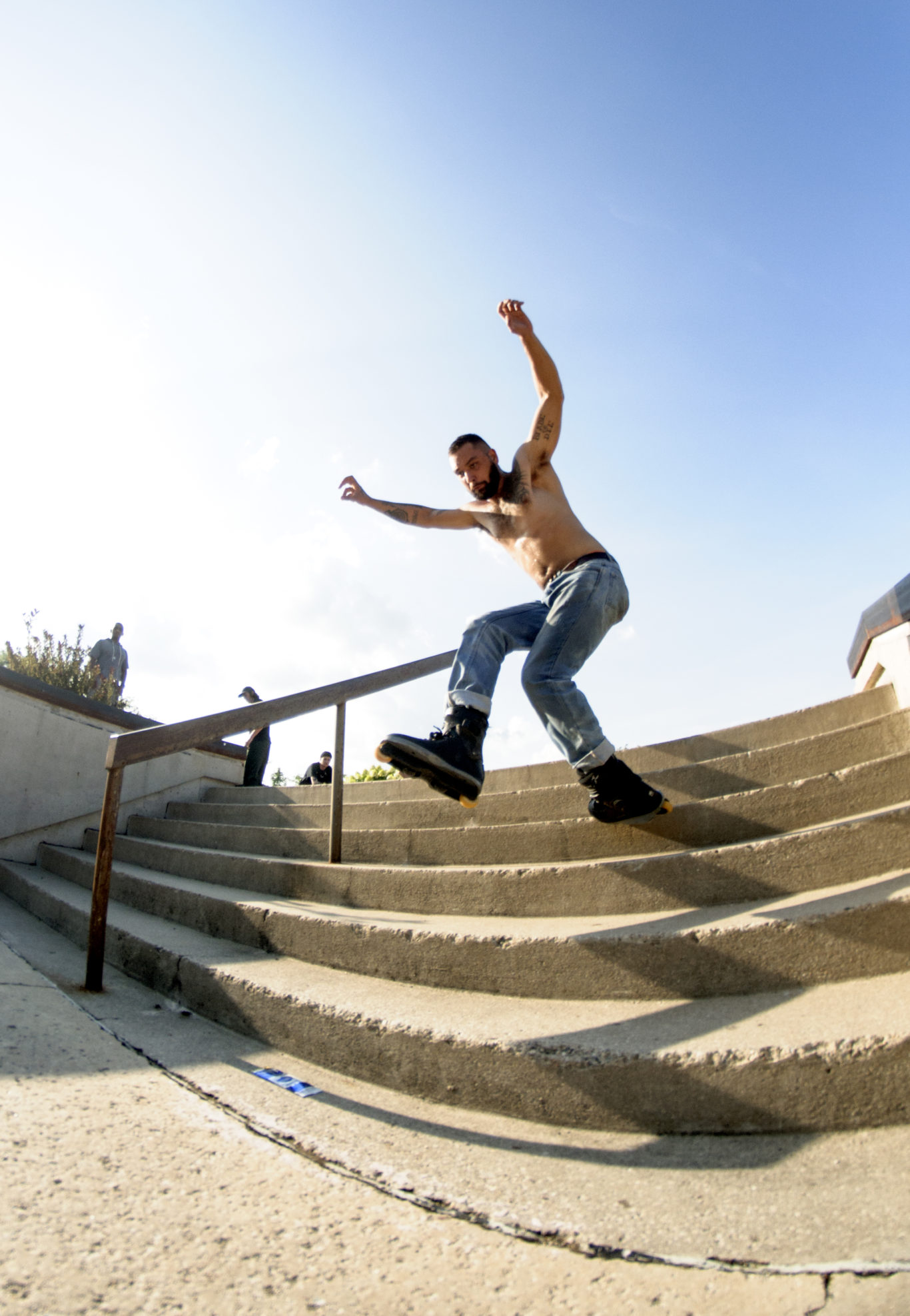 Wackiest trick went to Cincy-native and Chicago-transplant OG Tri Rudolf whose fish in big-wheel Flying Eagles on a six-stair out ledge was impressively wacky enough without the wallride down the ledge’s side.

Brandon ‘Lorenzo’ Thompson, King of Cleveland organizer, sponsored two other KSPS categories: Best Style went to the Zach Cummins who laced tech grinds with steeze, and Weirdest Skater went to Kyle ‘Guam’ Jordan whose big-wheel antics wowed the crowd. Both Zach and Guam have been featured in Benner’s Savor vids, arguably contributing some of the series’ best blading. 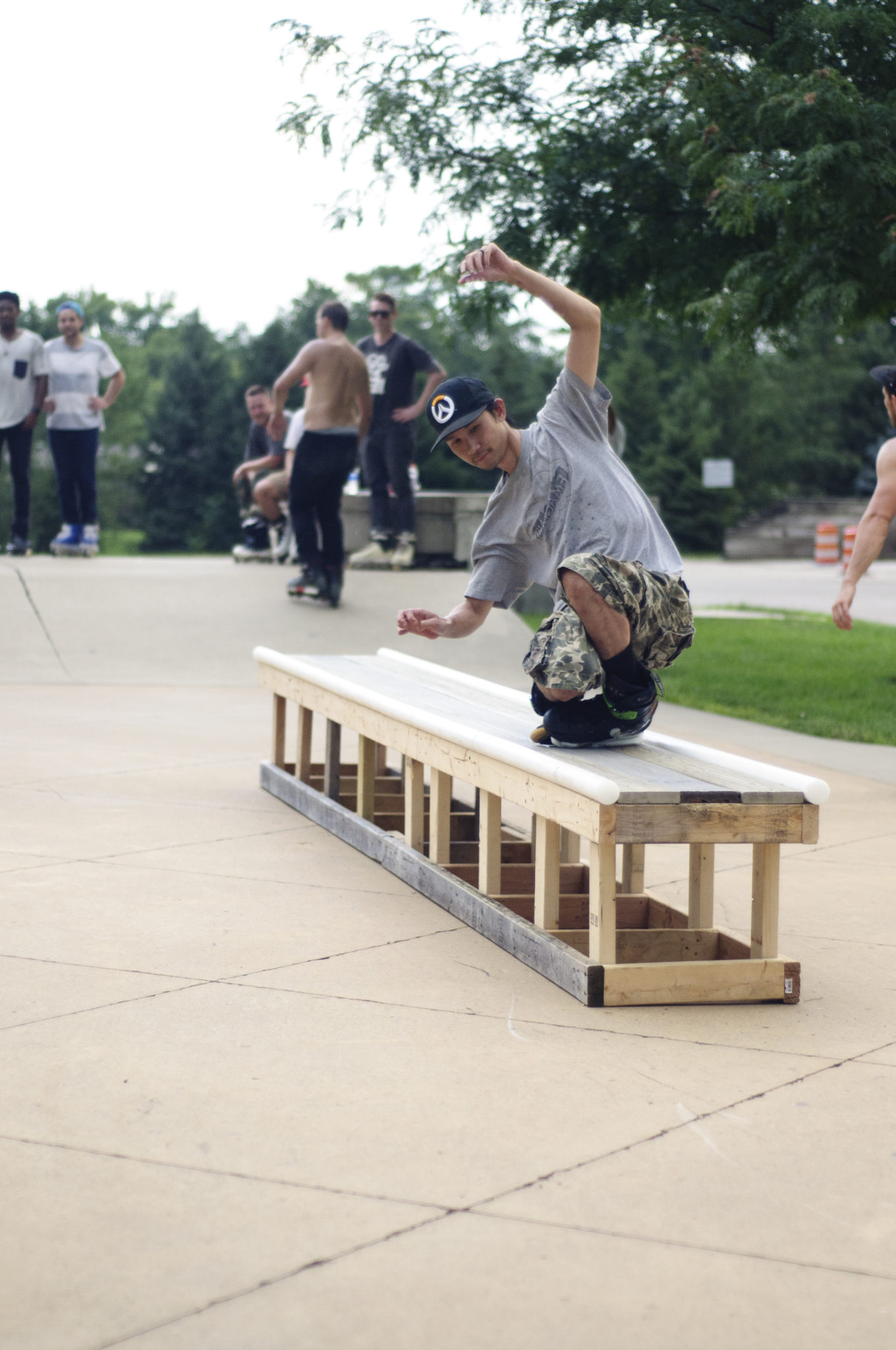 Thanks to the KSPS sponsors the top three spots earned generous product prizes and the audience had a chance to grab some swag and wheels during the lively product toss. Thank you, Oak City Skate Shop, Sunshine Distribution, and Bakerized Skate Shop!

KSPS is one of the Midwest’s best blading events because of the positivity, creativity, and humor of the local crew and host. Come roll and laugh with us!