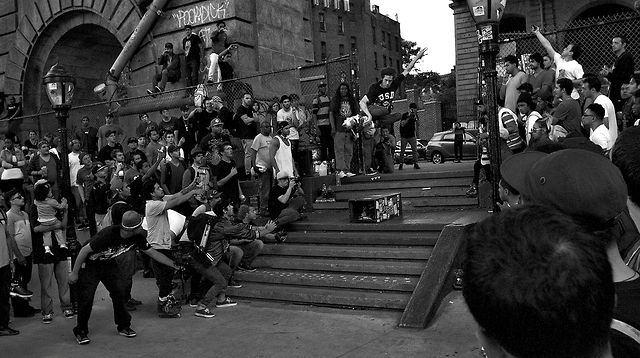 After a cancelled flight, too little sleep, too much alcohol, losing my voice, and an amazing competition, I can honestly report that New York City is not one to be fucked with.

For months, I had been telling a friend of mine I was coming to New York. He lived and worked in the nearby Connecticut and had been through a bit of a rough patch, so he needed the vacation as much as I needed to get the fuck out of my cubicle.

So Les Mooney picked me up at the airport and after a night in his surreal lake house/writer’s paradise cabin, we took the train into the city. We planned to stay with my friend and rollerblading’s best little sister Tiffany Aguilera at her place in Queens. We got settled in and headed right back into the city.

The traffic was moving, the pavement was decent, and we both had some Valo B. Smiths ready for the challenge. Les was apprehensive at the beginning of the trip, but 200-plus blocks later, we both were tired, but neither were defeated. We had a few beers, went back to Queens to clean up, and met up with the Strange Creatures kids who just landed in NYC.

Tiffany’s coworker was having a going away party at a bar with a $5 shot and beer special, so we got proper fucked up real quick. The bartender took a liking to us black T-shirt-wearing hooligans, so the shots were bigger than normal and we didn’t pay for them all. By the end of the night, Kevin Yee joined us and so did Franco Cammayo.

I joked with Kevin that we live blocks away from each other in San Francisco and we both have to travel to New York to find the time to meet up for drink.

By the time we got back to Queens at 6 a.m., Franco would scale the light pole in front of the bar faster than fucking Spider-Man, get a warning by the NYPD, take us to some black light club, climb a four-story building to meet up with some girls, and have one of them leave a friendly voicemail for me in the morning.

The City That Never Sleeps is truly a city that doesn’t sleep. While I was outside on Tiff’s porch having a smoke after that night at the bars—which ended at 6 a.m.—the neighbor downstairs was leaving to work at the nearby hospital in his OR scrubs.

As one drunken shift was ending, the sober one was beginning.

Finally! I thought, a city that can keep pace with me!

Oh, how fiendishly foolish the city let me believe for a second.

We awoke in the early afternoon with swollen bodies and vicious headaches. We ventured to the skate park where the competition would be held the next day. If you think your local skate park is busy, image the only skate park in the city that allows bikes on a Friday afternoon. Add in that traffic as well as the extra skaters in town who were getting used to the park.

An awesome local, whose name I didn’t get, recommended a great place to get some cheap pho, so Les, Kevin Yee, Thomas Martin, Rory Marett, John Cooley, and I went to get some food in Chinatown. The dinner turned into story time, so the Carolina boys schooled us on the finer points of proper Southern living, Yee kept that shit existential, and Les never let the jokes stopped.

As long as Thomas was in a brace after breaking his back and Cooley had explained how he’s previously scalped himself (literally) and two weeks later broke his neck, we knew these were the bladers to drink with in New York.

We wandered to the yuppie-trendy Lower East side and into some pretend rock bar. We were stacking empties of PBR 18 high while the overly dressed people in sport coats were leaving because it was too loud. About 10 rounds deep, Thomas rocked his back brace in full force while I went as white trash as possible in cut off shorts and AMall T-shirt. Les tried getting some random thick-neck in line for the bathroom to get into a fight with me. It didn’t work, but his efforts were hilarious.

If there were any other people you think you should be drinking with at that bar, you’re entirely wrong. Good fucking people.

Then the dancer in a sailor suit-inspired started dancing on the bar. Shit went blank after that. I remember some of the guys like Jeff Dalnas and Demetrios George from the USD tour came into the bar. John Ortiz was there, too. God knows what the fuck happened after that. I believe I avoided the NYPD twice that night, but I was too drunk to know, care, or be aware.

But who gives a shit about any of that? Comps are only about comps, right? So far I have given not one single reason to get out from behind your computer and actually fly out to NYC for the Invitational, or even visit for no reason other than being a rollerblader in the largest and most condense city in the biggest world power on the planet.

The first person I recognized at noon was JSF papa Kennan Scott with the rest of the Bernal Heights Crew and Brian Lewis and Hakeem Jimoh of Create Originals. Johnny Batista is one of those cats. They were finalizing shit, so Les and I did what any responsible rollerblader would do and I started helping out. We hung signs, swept, and did whatever bullshit no one else wanted to do but needed to be done.

This is rollerblading, so the more you contribute, the better we are all better off.

Contest poster boy and organizer Billy O’Neill showed up and within a few hours of watching some of blading’s greats mixed with the local skaters, it was time to get shit down.

The fun part of the comp, for me, was judging. Not only did I get a chance to officially judge people—since I do anyway—but it was an excuse to shove people out of my way who obstructed my view of the course.

The contest was an insane mess.

Judging was nearly impossible. There was so much going on from both directions that while one skater was approaching an obstacle, you missed one over in the corner.

Judging the competition, can say certain things with all seriousness: Jeff Dalnas did a better job sessioning the whole park than any other skater. Had the finals been in the whole park like it was first announced, he probably would have won. Tim Franken is a monster. The course wasn’t big enough for Dave Lang. Demetrios George landed some of the biggest, weirdest hammers of the comp Mike Koliner came out of fucking Zip Code Nowhere to do some crazy shit we still don’t understand and looking like another Dexter mother fucker while doing it. John Cooley wasn’t very behind with the creativity, but he kept pushing some hammer factor.

By the finals, in true NYC fashion, the crowd would only be happy with hammers at a set of stairs. So the locals pushed the decision from an open park to the set of stairs into said park and shit went down.

The stairs were entirely surrounded by people as bladers skated from across the street and over the stairs with a gnarly crack right at the top. From their viewpoint, they were hucking themselves straight into a crowd of people.

You were either there catching pros as they crashed into people or you were at home. Either way, you either know or you don’t.

John Bolino and Erik Bailey—who would take first and second respectively—skated the comp like true pros. In each spot, especially that last stair set, they kept escalating their trick load. Bailey’s disaster fish and Bolino’s 540 into the lower bank more or less sealed the deal for the spot.

When it was all over, three rollerbladers were let loose on New York City with thousands of dollars and a shitload of their friends. Not a bad way to spend a Saturday.

By the end of the night we were drinking free beer with B. Smith and B. Cam. at a motorcycle shop in Brooklyn watching legends in the motorcycle world mix with with legends of the blading world. There was some dude getting his face stamped in by the NYPD,

Like this article, the buildup to the comp was more than the comp itself. Both were a mix of planning and organization and chaos.

If you weren’t in New York that weekend, you wanted the organization. If you were there, you embraced the chaos.

Shit didn’t change New York City for one second. It remained in itself, as it will continue whether you visited it for weekend or a year. It moved on without you.

We should all be so lucky.