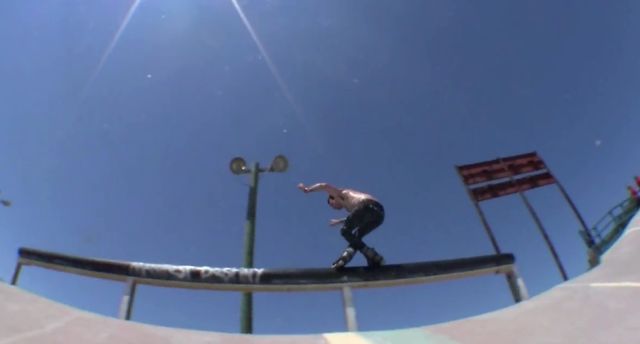 Blake Taylor seriously has no clue what he has on his hands. From the southern hospitality of all the FL crews to the attitude adjustment, everyone comes to terms with upon entering that concrete motherland. Surrounded by the souths finest fuckheads. You don’t ever catch yourself in the typical rollerblading contest mood. There was this ongoing vibe of good times. Maybe it was all the booze, or head changes. But something that started when we originally got in the van.

When you pull up to Kona Skatepark that vibe only increases and walking into the park puts your eyes in a whole new perspective. I personally have never been to a rollerblading contest where so many people went that big. I mean don’t get me wrong it is nothing to go to BCSD and see the most known pros dropping hammers. But to be surrounded by so many people that were just there to rollerblade, not because it was their job, was unreal.

Upon watching the edit (which I haven’t seen yet) I am sure those of you who weren’t there will only have feelings of excitement and jealously. Simply because you weren’t there. I was honored to have southernscum be in participation with so many legit people. Having the Shredweiser doods, and M1 be some of the only other companies there representing was so respectable. Seeing so many old school southern heads still coming out supporting and doing the damn thing was priceless. Seeing Steve Gasstation wear that vest like he knew he was wearing it was awesome. The announcers were so on point and kept it entertaining all day long. And then of course the competitors. Whom gave 100% all day long. Ignoring the fact that we were all baking in direct sunlight that was cooking easily up in the 90’s all day long. No one gave a shit, it was all about slamming another tall boy and landing another trick.

I hate to be so bias but I got to give it up to my homies that took home the trophies. You all gave each other a good run for your money. Dave Lang, my friend. You sir are a monster and are doing incredible things for our sport. I’m sure that everyone that attended the contest this year has no problem in removing your hats to each person that skated that day. From the kids, to the ladies, and most of all to the pro/am competitors who gladly came out and showed our industry that you don’t necessarily have your own pro skate to be the best. You just have to skate like a professional. As I stated before. There is not much to be said about the Panhandle Pow Wow. Except it’s on its way to the tip top. A prime example of how a blade contest should be hosted, judged, and executed. If you decide to get off your lazy ass and make it to Florida in the future to rollerblade, try to make it a priority to do it the weekend of the Pow Wow. And if you go, prepare to have one of the best weekends of your life. Big ups to all the home boys that cruised 10 deep in that damn van with me to get there and back. The memories are priceless buds. Can’t wait until next year.

Hiding from the sun

Filming for the official edit

… and his bloody arm

Buying some wheels from Wally at the M1 booth

The commentators for the weekend bringing the lulz

Top soul up and down

Cassandra Condon about to lace some hammers

Julian Bah we out here!

Game over for JonJon

Hammers, they want them

Tta all over that Amall box

Dave Lang with the fishbrain tap