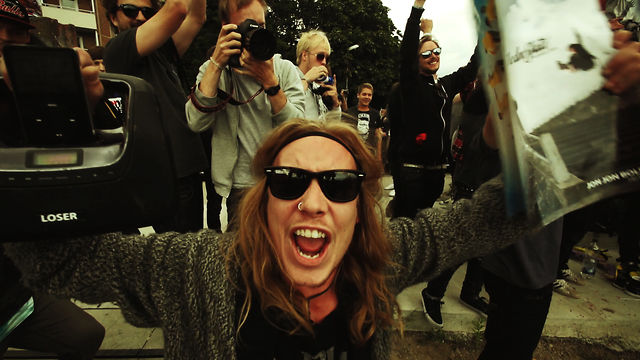 After a 6-7 hour drive we finally arrived in Berlin at about 1 pm. The first spot was “Curbs am Club der Visionäre ” a couple of interesting ledges with a metal edge. Everybody was already shredding the curbs like crazy – one of the first tricks I saw was a huge back royal straight and up transfer ao backnugen from Eugen Enin. As my friends and i were really tired we decided not to compete but just to have a good time and enjoy the event, and oh boy a good time we had. The contest attracted so many people: Berlin locals like Martin, Raik, Gagi, Dominik Wagner and obviously Jojo the organizer, German skaters like Max Visser, Eugen Enin, Sacha Lopez, Jo Zenk, Miro Kolb and Fedor Simonov but also international skaters like Montre, Jon Jon, Nils Jansons, Josh Glowicki and Gabriel Hyden.

The competition was off the hook. Everybody destroyed the ledges like there was no tomorrow. Dominik Wagner stood out with high-speed super clean fishbrains straight and up, Jo Zenk (recent Be-mag up and comer) went big with an acid to switch acid transfer, Jon Jon completely took the cake with an impossible soul to truespin soul transfer. All this and more went down in a chilled session format in groups of about 5 skaters.

When the last group finished it was time to proceed to the second spot an easy down rail that would have been perfect if it wasn’t for the stairs in the end. Here the concept changed a bit – it was one big session with everybody who wanted to skate. As the rail looked really promising I decided to join the session, and again a lot of cool stuff went down. Jon Jon landed pretty much everything first try including full cab mute true mizou while Eugen Enin impressed with an outspin topsoul and more. The atmosphere was awesome – it was more like a session with friends, everybody was chatting and chanting for every laced trick. I was specially impressed with Jurij Pelaev – a dude who skates for only 1-2 years but laced tricks like a pro, soul, acid, backslide, kindgrind and so on. Unfortunately Gape could not skate anymore cause he had a badly bruised hip. When Gagi laced a sick 360 down the gap Jon Jon brought the gap to a new level by not jumping the stairs but to the left over the greens and a little wall. He got stuck at the wall once but took it like a man, got up and cleared the gap with a big 540. This kind of ended the session at the second spot.

The final spot was a not too steep double kinked rail. The format once again was a big session with everybody who wanted to skate. I remember Montre stating that he could not skate kinked rails too good and lacing a perfect topsoul 450 royal later on. There were so many good tricks it’s hard to point out some – I’ll try it anyway. Sacha Lopez did what was in my opinion was the best trick – a high-speed topsoul to wall ride 180 gap. Unfortunately he didn`t land it during the competition but laced it perfectly afterwards. Nils impressed with an attempted topsoul on the lower part of the rail to soul on the normal rail but unfortunately could not clear the whole rail. Jo Zenk took some hard falls with tricks like topsoul to true soul but also laced lots of hammers. Josh Glowicki came up with a nice makio to bank to fishbrain on some tiny edge of the wall. The only bad moment was when Toms Krasovskis cleared the rail but then stumbled over someone’s legs and hit his head hard on some hidden pole. He ended up with an ugly wound that would have needed stitching right next to his eye. But being tough as he is he stayed till the end of the competition and I doubt he went to the hospital afterwards. I nearly forgot to mention Gagi who laced a true mizou if not first try then within the first 3 attempts – if I’m not wrong this won him best trick.

For skating amazing during the whole competition Jon Jon took the win closely followed by Montre who skated with an broken rib – I don’t want to know how good he would have skated completely fit. Nils shared the third place with Gagi and Eugen Enin ended up rookie of the day.

But wait – the story is not over here. The after party was even better than the competition. Everybody met in an area with lots of clubs, late shops and bars. I have to point out the bar KAPTN where we drank double shots of absinthe and Gape, Montre, Jon Jon and a big crowd of skaters and strangers had a guitar/singing jam session. We then lost some of the others who entered a close by club while we went for the late shop again to get some more beers. At about 6 a.m. Montre and Jon Jon were among the last ones to go home while Jo Zenk, Michi Wagner and me decided it was time to hit another club. Somewhere deep in the Berlin night I got into possession of a huge blue beanbag that now graces my room. Our night ended at about 12:30 pm, but only because we had to check out from our hotel at 1pm.

The man, the myth, the legend – Jojo Jacobi

The real street Berlin was an amazing event, whatever it is you are looking for, be it amazing skating, a good time with your friends or an amazing party – it had it all. Thanks Jojo and Dirk for going through the trouble of organizing it. I can assure you it was worth it and if you missed it this year I can only hope there will be a second edition. We’ll be there for sure.

I’m sorry if I forgot to mention something/someone, this was just my personal view of the event.