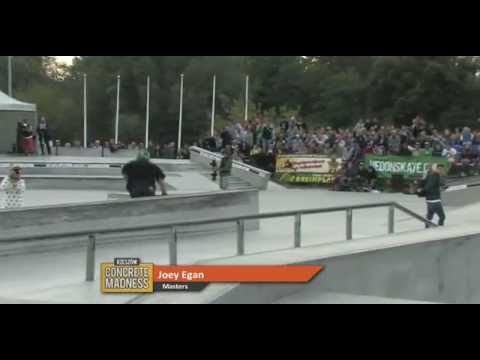 The expectations were super high since the last year’s edition of Rzeszow Concrete Madness was considered one of the best Polish rollerblading events to date, due to the great organization and publicity. This time the organizers took it few steps further, easily getting that title again.

Thanks to the hard work the local crew put into the event, it was organized in a super professional way with taking care of every possible detail to make it easily accessible and fun for the audience while being friendly and exciting for the riders at the same time. The whole event was filmed with a couple different cameras and aired live so you could watch it online, including commentary and riders interviews. The new judging system allowed for a quick summary after each run, displaying a rider’s final results on the score boards, just few seconds after finishing a run! It made the whole thing go down very smoothly!

The contest lasted a looong 10 hours and over 70 participants tried their luck in one minute runs all over the concrete obstacles of Rzeszow’s Skate Plaza. The park itself is huge, with rather big stuff. Bowls, endless quarters, banks with skilfully incorporated classic grindboxes and rails. Everyone could shine with their own ideas and spot selection, and that’s how it went down exactly: with much diversity in each run!

The Master category finals stole the show with 11 finalists presenting their unique style approaches. During his runs Joey Egan stayed in the air more that anyone else transferring quarter walls with huge flatspins. Fredrik Andersson and Josh Glowicki killed the park with unusual speed on their Powerblade setups and while Josh used it for some big gaps, Fred kept grindining all kind of stuff in 76mm flat setup which was simply impressive. Second place was taken by Tomek Przybylik (Summerclash 2013 Amateur Winner) who once again proved that his consistency and flow is super hard to match by anyone. Tomek came through with a sick mix of stylish jumps and his signature grinds including True Savannah on the sphere-like bowl extension that definitely left an impression on crowd and riders alike. Third place went to polish Razors rider Krystian Zarzeczny.

The live coverage of the whole event is still available online here. We strongly recommend to check it out simply to see how a blading event can look like!