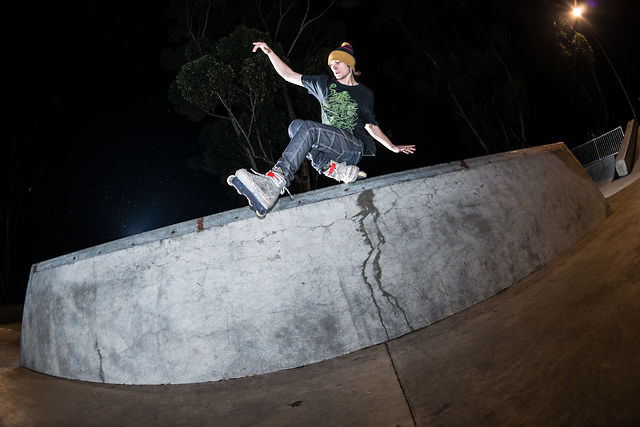 Australia is generally thought of as a sunny place, though Melbourne being so southern can result in some pretty wet weather come mid year, and due to some other events being on around the time The Vics were originally to be held, the contest was pushed back into a risky time to be holding it outdoors. Unfortunately Mother Nature threw a massive spanner in the works… Saturday June 9 was the day and weather looked touch’n’go but everyone remained optimistic, and though Melton Skatepark was quite damp when everyone arrived in the morning, everyone mopped it up to the point where it was completely dry – for about 5 minute before it rained again while showing little sign of letting up.

Plan B: Let’s all go to The Ring Of Fire, a privately run indoor skate facility featuring fantastic bowl, housed in the most hilariously ghetto building, to hang out, have a skate, with plans to regroup in the morning for some hopefully better weather. Everyone smashed it with in excess of sixty rollers there rinsing the bowl and giving the rawest of street courses a decent workout. Prizes were given to the best Under 18 skater, Nathan McCormick, and best unsponsored skater, Thomas Dalbis. Also noteworthy was the speed at which CJ Wellsmore was flying around the bowl before coming unstuck on a mach-10 alleyoop fish, injuring his knee enough to put him out of contention for the following day – so rad for everyone to get to see him shred again in person though!

All that came out to the after(pre)party on Saturday night at a bar in the city had a great time, with great drinks and live music, and the bar staff were stoked to have us there, giving us control of their dvd/projector setup to screen a stack of old Aussie skate vids, even when the bands were on!

The event time was changed to 1pm Sunday and people turned up at Melton it was raining again so another skatepark in another suburb, Prahran, which was dry, was chosen as a spot to roll in the meantime. As soon as it was established that the weather could be relied upon enough to justify trying our luck again at Melton it was posted on the event’s Facebook page. Getting the word out proved to be difficult and the organisers apologise they weren’t able to communicate the event updates with everyone. Social networking has become quite the integral part to how much of our scene currently operates as far as organised sessions or events goes, and we learned a lot from this weekend, and we’re so glad that despite how far from straight forward the weekend turned out to be, so many were able to find out through the updates during the day on the Melbourne Rollerblading Facebook group and the event page or were able to find out by phone through someone they knew. Smartphone or not, the desire to witness some shredding was there the whole weekend, and those with that desire that were physically able to be there and could justify driving out to Melton three times in one hectic weekend, witnessed the most shredding that park’s ever seen and the hardest shredding we’ve seen in this city for a while.

As always though, when events don’t run to schedule the biggest heartbreak is for those that can’t be there when it all goes down due to prior commitments or itinerary constraints, particularly those who had travelled from interstate, of which there was quite a few, for example Levi Hicks, a veteran from Queensland which is 1700km north who has been killing it lately with online edits showing how much of a contender he would be, had to fly home on Sunday evening, right around the time we finally kicked off the competition under the floodlights of Melton Skatepark.

It was definitely Gav Drumm’s day though. He dominated the heats with such control and skated HARD in the finals. Thomas Dalbis destroyed the main up-flat-down ledge, and new Melbourne resident Trent Phillips went all out as he had planned and raised many an eyebrow in the process, having recently moved over from Perth in the far, far west of Australia – welcome to the scene Trent! The artist formerly known as Danny Jensen – now Danny Hawkins – also skated at his typical mind-blowing level, though it was the consistency of Hayden and long-serving member of the Australian scene Brad Watson who made up the rest of the podium in an electric vibe under the lights.

Big thanks to Kristy Farmer for her work behind the barbecue, Dan De Sousa for teeing up the afterparty at Horse Bazaar, and Danny Hawkins for bringing some extra obstacles to spice things up, and everyone who gave anyone a lift out to Melton to make it such a great evening in the end. Also thanks Melton council and a massive thanks to all the sponsors for supporting local events and the the local skate scene – Buy local!

More events to come from Oz this year include the Queensland Titles, the 10th annual Right2Roll street contest in Brisbane, and the Australian Championships to be held in Canberra at the end of 2012. Australia’s scene really has a lot going for it right now. The vibe has always been rad but the community in Melbourne is now tighter than ever before, and it really was so cool to see so many people come down to be a part of it. See ya’ll next time – perhaps in a warmer, dryer time of the year!