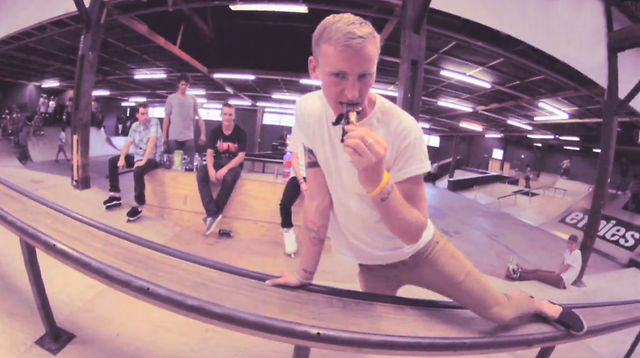 The BOK is being held in Burnside, Deventer. Burnside is a well-known skatepark that receives makeovers at least once a year giving understanding why the competition and the top three winners are different every year. Consistency is thrown out the window and the freshest of features become the prime focus. Herm, the owner of Burnside, decided to change the format for this edition. He skipped the 5-minute-5-skaters-jamsessions and final runs, and made three big sessions on different obstacles in the skatepark. Everyone was granted the ability to join the session for fun. When a skater did a big trick and the crowd went crazy that skater was awarded Joetje. Joetje is an old-fashioned word for Ten Gulden (€10 nowadays). This money could be spent at the bar and shop at Burnside. This new format gave a chance for all while breaking the mold.

The first obstacle was a long down-ledge with coping on both sides. Bassie Berghuis and Luca Gobbo killed this spot with numerous switch-ups. They were given the first Joetjes of the day. Amazingly, it only took fifteen minutes of chaos on ten square meters for this to happen. Truly something that could only be appreciated by experiencing the view first hand.

After the first session, everybody went outside for a cold beer-and-BBQ session. Due to a summer filled with terrible weather for skating the outside session took quite some time because this was the first day in months that the sun decided to grace us with its presence. So, after a while, everybody made their way back inside for the second obstacle.

The rail-box, undeniably the sickest round of the day. Everybody went crazy and threw down all that they had. The youngsters killed the disaster-rail! The locals, Davie Nijenbrink and Beer Mungla, really owned this section with, respectively, a 540 AO Soul and a Full-Cab Truespin Soul, which ended up becoming the best tricks of the day. Tasheed Zaalman, a talented skater from Rotterdam, showed his rail skills by doing a really clean 540 Back Savannah. The new generation of rollers really impressed the audience on this obstacle while the ‘older’ skaters focused more on the rail-bow curved handrail on the box. Bart Visser, Bas Berghuis, Luca Gobbo, Rik van Huik, Robin Bosgra, and I were going up and down using all sorts of combinations.

The final spot, a straight handrail, which was relatively high to reach from the ground and rather low to jump on from the box, left this event a bit lacking of skaters. Even with the small numbers it was stil quite impressive. Again, we found Tasheed killed a spot with a nice Hard-Spin Top Soul. Orveo Mac Donald, Rik van Huik, and I were skating the rail from the ground and pulling off some really clean Topsouls, Unities and Back Torque switch-ups.

By the end of the day we saw thirty Joetjes given away and with the weather holding up everybody went back outside and continued the BBQ session that began earlier in the day. I guess we shouldn’t be all that surprised, but all of the Joetjes were spent on beer and meat as the after-session continued on throughout the night. I would like to send out a big thanks to everyone who was involved with this event. A special thank you goes out to Herm and Burnside for organizing such a great spectacle. Hopefully, we will see you next year earning some Joetjes!