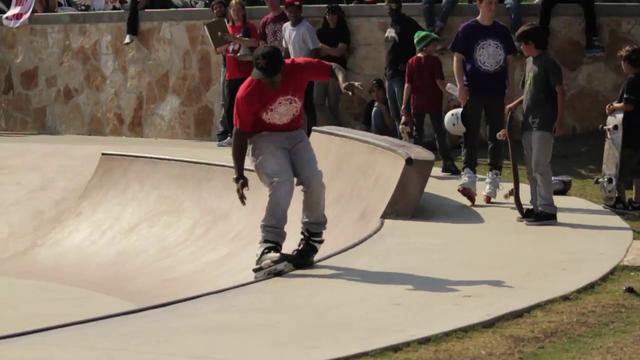 The turnout for the contest was huge. With skaters such as Rob Zbranek, Brady Johnston, Jason Howard, Logan Harlan, Mason Richard, and Chris Fleener, you know some amazing skating went down.

Rob Z started the contest off right with a royale on the tall square rail to a huge drop into the bank as his first trick. The stage was definitely set for the rest of the day’s madness.People flew all over the park and hit things previously never thought of before. Logan “Dench” Harlan’s launch from the super steep quarter to topsoul the underside of the railing or Mason Richard’s 540 out of the skatepark into the basketball court below are prime examples.

In addition, Dorian Deshay showed off his consistency and laced tech trick after tech trick. He also stomped huge 540’s and fakie 720’s off the stair gap. Brady Johnston also could have put on a clinic on how to skate a down stair square rail. He landed full cab souls and acids first try and laced true kind grinds and hurricane topsouls like it was a walk in the park.

In addition, Chris Fleener came through with some of the craziest stunts of the day. He threw humongous 720’s over the island gap and one massive 360 from the big bank to the steep quarter pipe about 25 feet away, which earned him best trick of the contest. Travis Reynolds landed a huge launch to royale from the bowl to the down stair rail, as well as landing triple switch-ups on the same rail.

Scott Wells and Mason Richard battled it out and gave the judges hell trying to keep up with all the tricks they landed. Scott’s consistency ended up being the deciding factor and he deservingly took first place. Mason Richard and Travis Reynolds took second and third place, respectively. Scott received a typical winners bath in champagne by Ryan McCarty, and we wrapped up the contest with a huge product toss to the ravenous kiddos.

The Donate and Skate event was a huge success! We put a lot of new kids and adults into rollerblades. In addition, the contest showed them just how exciting rollerblading can be. We even converted a few skateboarders in the process!We are planning on organizing more Donate and Skate competitions in the future and encourage other skaters to hold similar contests of their own to help get more kids interested in rollerblading. We hope to see you at the next event!

Want to know more about the Donate and Skate project? Well, check their website and facebook then and consider a donation! Check the gallery below for more pictures!