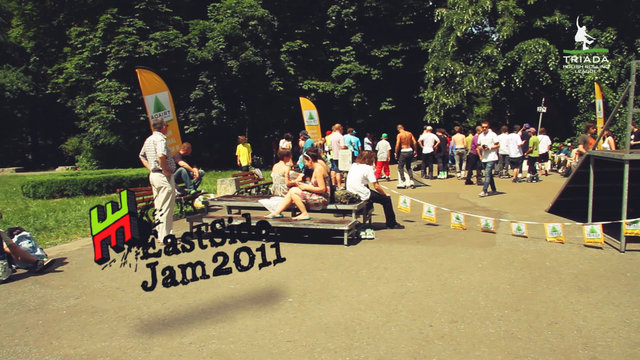 East Side Jam is a collective effort of the local rollerbladers – the East Side Group – to make the eastern side of our country more visible on the skating map. For the last three years, we have been hosting the biggest street competition in Poland which had great feedback from the community. Each year we tried to take things to the next level. The 2010 edition had an impressive list of sponsors, big promotion all over any media we could reach, a huge list of attendants and as a result, some of the finest skating I have seen in a good while. After 2010’s comp, one question came to mind: how make things better next year? An illegal street competition has its limitations. Our budget was very tight each year, we got whatever we could from the sponsors and then covered the rest ourselves.

There is another relevant thing that happened in 2010. It’s the year Polish Rolling League arose, coordinated by the “Green” Association. The first attempt to link the biggest contests together turned out successful, resulting in changing the 2011 name to Triada Polish Rolling League. The extra part came from the name of Triada travel agency, a company that decided to believe in what we do and fund a series of events. Together with the “Green” Association we have decided to add East Side Jam as a part of the league. The decision was not easy, changing a well sought street event to a skatepark format was bound to disappoint some fans. However, our constant search for progression led us to try new things out.

Every experienced rollerblader knows that a competition usually isn’t just the few hours of Saturday. Other side events throughout the weekend constitute the whole experience. As to satisfy the expectations of all the attendants, we decided to host a Friday street competition for anyone that was able to come earlier.

Lublin is known for having many good handrails. The contest started at 5PM, and with a big turn-out we managed to hit 5 spots. After the first spot, where both beginner and advanced skaters could perform some tricks, it was time to move on. In the meantime our two visitors from Ireland, Russell Dineen and Keir Lindsay, royaled a square, kinked drop handrail that hasn’t been done from the top before. Later, the skaters proceeded to conquer a high, yellow steep rail, the blue transfer rails, and a grey rail in the middle of stairs until it was too dark to see anything. The spectators watched in awe, everyone skated hard as if there wasn’t another competition to take place in tomorrow.

Lublin doesn’t have a legit skatepark to offer, so the obstacles had to be transported and put together just for the event. One advantage of this was the opportunity to get a good spot for it. The effort of all the organizers was awarded by the local authorities, who allowed to hold the contest in Park Saski, a park in the city centre where many city residents spend their free time relaxing on the benches or taking a walk through the alleys. To add to it, we received the news in the last minute that the City President decided to be the official patron of East Side Jam 2011! It surely added to the prestige of the event, and will help with making things better in the future. Even though the skatepark wasn’t the greatest, over 100 contestants presented a good show of rollerblading. The peak moment was Piotrek Combrzynski’s huge misty flip over the quarter pipe’s barrier – of course as part of a line. After that, there was no doubt who should win, even though a bunch of other skaters were performing great.

The fourth edition of our contest is now history. The ideas for next year already started flowing. How is the next East Side Jam going to look? Noone knows yet, but we will surely continue with our goals of constant progression of the event, showing rollerblading to a wider audience, and most importantly, providing good times for anyone that decided to visit. See you Spring 2012!