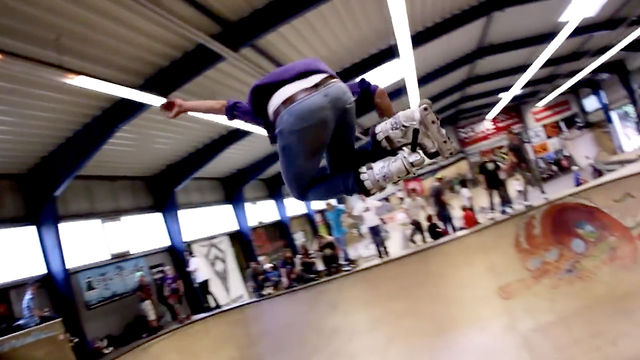 After a short break and some warm-up tricks from the competitors the day continued with the first of the jam sessions on the outdoor grind box. The format was 5 competitors per group with 5 minutes to impress the judges. The Top 3 from all the groups went through to battle it out for the 1st, 2nd and 3rd place. The skating was of a good standard and some great tricks went down. It was also lovely to see how many young guns and girls decided to compete!

After another little break to get some food from the BBQ, or just relax it was time to go inside for the Classic Hamburg Bowl contest. This is where the locals really got to shine with their vast experience in the bowl. Sidney Hansen did this extremely well with some big tricks like a disaster back royal on the over vert pool coping section of the bowl, and a big 900° transfer from the street course into the bowl.

As if saving the best till last the skaters where given the opportunity to use the whole park for the Best Trick contest. Everyone was given 3 tries at their trick and it was soon clear which 3 should make it through to the finals. Sidney Hansen impressed again with creative and tech switch ups, Fedor Simonov went off with plenty of big tricks including a disaster from the street course’s flat bank to top soul, alley oop soul back to top soul revert back in combo on the vert coping only to be one upped by Melvin Siemianowski on the same transfer with a 450° savannah!

To sum up everyone had a great day. The weather stayed dry and sunny and we got to see old friends and make some new ones while having a great session!

We are now looking forward to the 10th and 11th of December for the annual X-Mas Jam/German Championships 2011 which will be held at the I-Punkt Skateland. We would like to thank the team at I-Punkt Skateland as well as Grindhouse and everyone who came out to make the day what it was!