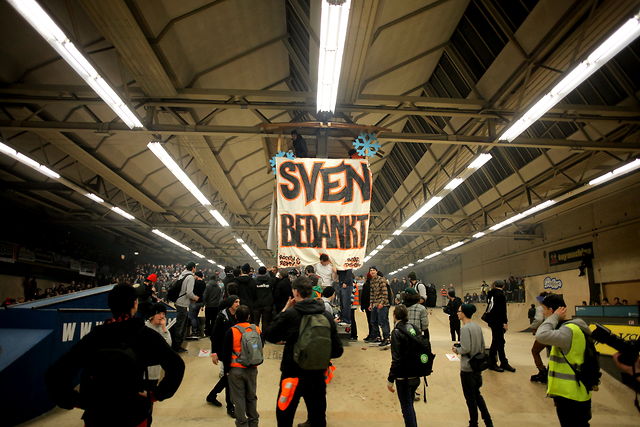 Inspiration is always the theme of the day at the Clash. Whether it’s the kids looking around in amazement at their favourite pros, the competitors themselves pushing each other harder through each round of the contest, or a Chris Farmer inspired stag party, everybody bounces off everybody else to infinity and beyond. Just that sawdusty beery smell of the Winterclash gets everyone juiced from the first minute of day one.

I think by now we’re beyond “Every February in Eindhoven…” so I’m just going to say that this year’s Winterclash was the biggest yet, in every sense. Area51 skatepark got a huge upgrade with the new obstacles catering for every style from Richie to Romain. The Grindhouse guys contributed the stupidly hard hourglass box and a triangle/flat ledge big enough to house a small family.

Across the park the Loco plaza added some extra tech difficulty to the smaller rails and curbs we’ve come to love, including a large grindable wooden hammer. Opel (talk about big-time sponsors!) came through and provided the Adam & You box, which combined spin to win, megatech and everything in between. Whether wallride to inspin 360 makio or flatspin disaster topsoul, that was the place to throw down!

Unless you preferred to challenge the nutcracker handrail with Nils, Lomax, Enin and more. The girls were just as brutal to the steep rail; nearly every one of them locked a sweatstance, something you’d never catch me trying. Chihiro Azuma took that a level or three further with misfits and an alley-oop topsoul that sent the whole crowd nuts.

Speaking of which, the crowd at Winterclash normally conducts itself with the self-restraint of a demonic Bucking Bronco, and this year they took it even further. Wasted Farmers, the Dutch nutcases, and a hell of a lot of beers blurred the boundaries between contest and party. Probably a nightmare for the MC and crowd-control volunteers, but a lot of fun as long as people kept out of the charging bladers’ way.

There was, of course, a lot of charging. CJ and Dominik found a disaster gap so big nobody else had even noticed it, throwing halfcab wallride and kindgrind. The hourglass box was impossible to skate at less than the speed of sound, and everyone still killed it.

To escape the madness, you might have thought the tradeshow was a good idea. And you’d be wrong, because approximately one hundred billion kids were let loose with their pocket money, and plenty of adults were acting the same way. It was awesome. The variety of stalls was really encouraging, with old favourites like the UCON and Hedonskate stalls mixing it up with newcomers like Bake and The Blackjack Project. The Seba Cj Wellsmore skate was unveiled as well as the Adapt × Be-Mag Collaboration Skate, the Bake Noir Powerframe, and a whole load of new clothing lines. Suck it, recession. We even hired Batman to MC at the (free!) afterparty, continued to get drunk and excited to European hyper seizure dance music, and one-upped the nightlife of Eindhoven right in the middle of carnival season.

After that, it’s pretty certain that nobody enjoyed their flight home, wherever in the world they were headed. Maybe a 12 hour flight to Japan, or the same distance in the opposite direction to California. Winterclash had guests from both and everywhere in between. South America and Australia were there, next to the USA, Asia and shredders from nearly every country in Europe. At least one dude from Dubai showed up. Catching up in real life with old and new friends from all around the world really only happens once a year, making the Clash one of the most important and productive events around. Jojo, the Area51 team, volunteers and bladers all make sure of that and we couldn’t be more grateful.

The final round of the contest is barely worth describing. Of course you had to be there, and you’ve all seen the edits. But the top ten skaters, the “Sven Bedankt” poster and unlimited attempts at best trick got emotions and volume smashing through the roof. The crowd left Area51 into the snowy Saturday night feeling like that level of madness and love for rollerblading could never come around again. And they’re right, until next year. We’ll see you there. Whether you want to party or skate, join the biggest crowd or best trade show, or just get insane for three days straight, do it at Winterclash 2014.