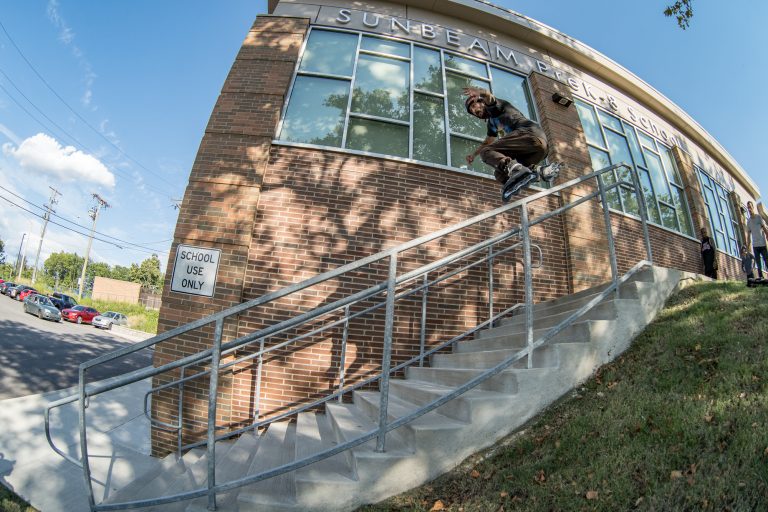 2020 will be remembered as an incredibly trying time within human existence. To date the Covid-19 pandemic has taken the lives of over 1.5 million individuals worldwide and possibly permanently changed the way our cultures operate, and our inline skating community is not without exception from it’s impact. Numerous events have been postponed or canceled until situations eventually improve and we return to some semblance of normalcy. For example, The King of Cleveland organizers had the difficult decision to make on whether they wanted to delay their street skating event until the following year or continue with the contest and take the necessary precautions to ensure the safety of the competitors and spectators. They decided on the latter but it wasn’t without it’s fair share of adversity and questioning from the community on the appropriateness of holding an event during such a tumultuous time in our history. To give us some insight into the organization and the breakdown of the contest, we have welcomed organizer Brandon Thompson to shed some light on what transpired before, during and after the event.

Brandon Thompson | I was down in Columbus, I opted to skip spring break and do a week-long seminar course in the state house where I get to go learn all about state government. The first Covid cases were in Cleveland, so many of our speakers cancelled on us out of fear. Kinda funny now, 3 confirmed cases in Ohio, so lets not go meet these people from Cleveland they might have that new shit. I tried to push to move the contest up but was voted down. Good thing it turns out. I would have wanted it to be in June which during June the national pulse would have heavily frowned on that. So we set it for September 12th. I was supposed to drive home Thursday night, pack and fly out Friday early early morning for Florida. Shit really hit the fan right before Pow-Wow.

I had promised Blake a year earlier at the A-Town Stomp event I would be there to help and I try to be a man of my word, even with the severe inconvenience of not sleeping in my bed for 10 days. Jimmy had already flown down a day early and he was feeding me info. Once he said it was still going on I rolled to the airport. Pow-Wow was amazing. This pre-apocalypse skate contest vibe was crazy. Looking back we could of all been a little safer that weekend, but none of us knew what we know now. Following Pow-Wow we officially put everything on hold. I’m sure you remember how scary the second half of March was through May.

Mid July life started to seem normal again. The summer heat and temps got people back out doing things, the virus seemed to slow way down. Brent, Jimmy, and I had some small discussions. But decided we wait until a month away from the contest to decide. At this point our date no longer worked so we had moved it to September 5th but never telling anyone that. Just that we were gonna do a wait and see approach. We have a strong relationship with the Windy City Riot, and we knew they were planning to go ahead with their contest. We agreed we should attend, and try to really observe what goes on, what works and what doesn’t. So the Riot went down the weekend of July 18th. It was awesome and kind of reminded everyone why we do what we do. We collected a ton of good observations and off of all that energy we got down to the nitty gritty planning for the King of Cleveland.

Over the next 3 weeks we developed a few things. The most important one being our Covid plan. On August 11th, we broke our online silences with a statement retiring our Chief Wahoo logo, because it was the right thing to do along with the Indians baseball team. We made it clear we were going ahead with the contest and the next day I released our Covid plan. We, like many contests, refused to reuse previously skated spots for our event, but that went out the window. Our number one concern is everyone’s safety, people are safer when they have room to move around. Basically we looked for and found new spots, but if a previous spot was a better fit for safety, we didn’t exclude it. Things we looked for was enough room for spectators to space out and still be able to see everything, as well as spacing the skaters out enough to keep safe social distancing. Multiple things to skate at each spot was another heavily weighted factor.

Our major draw is that every year we provide lodging for as many people as possible. We cut deals with a local hostile or book multiple BnB’s. That was nixed. We instead encouraged people to book their own hotel rooms downtown. We also helped people arrange this and in the process split people up. Instead of putting everyone at the same hotel, we instead would direct people to the next one down the block or across the street. This was to try and cut down on creating a Bittercold hotel party situation, which was not conducive with Covid. Most people had no problem with this, but we did assist in the costs for a few. We saw the value in taking this serious. Instead of the normal 16 people staying at my apartment, it was just 2.

The Ohio governor had a social distancing and mask mandate. We were clear, we intended to follow that mandate to the best of our ability within reason. I thought this was very good to be clear about. We can’t make anyone do anything but we can let someone if you plan to come and be a dickhead, don’t bother. You would think with all that, the table would be set. Over the next 3 weeks we ran ads encouraging people to book hotels. We shared, shared, re-shared, made other people reshare our expectations for ourselves and everyone. Based on how things went, everyone got the message. The last major things that happened were pretty cool. So our itinerary is always a big thing. We do a full color booklet everyone gets to keep. We still did those and passed them out but we also did an online itinerary which is still viewable. Please take a look, we added a few last minute things that made a big difference. https://bladecle.org/themove/

The free chair idea was great. Basically, I went to WalMart and purchased 15 chairs. The first 15 groups of people who arrived received a chair, and a stern look in the eye that they would agree to place that chair a minimum of 6 feet from another chair. This idea actually worked and created a lot of space in a group of people that would normally be bunched way the hell up. We also advertised no after party. We didn’t want people to feel pressured to attend something like that so we did announcements in a field at the meeting spot and then let the group kind of disperse itself. We did have a friends back yard a few houses down where we had an unofficial afterparty but we were sure not to mention it in any of our publications or announce it. We did not want anyone to feel pressured to be in an unsafe situation.

As for the event, it went well. We told people to contact us if they got sick. We got contacted by one person, and they were negative on the Covid test. So as far as we know 0 cases resulted from the weekend of King of Cleveland. I think the timing and luck were the big factors. Ohio numbers were low at the time as they were nationally compared to what’s happening now. Our attendees really need to receive all the credit, people went easy on the bottle sharing, and hugging. And for that I really thank them.

Egon: For sure the event was well organized compared to some of the other events I have been to. I believe Lorenzo Thompson did most of the event planning with the help of friends. Safety was definitely a big concern. If you were not participating in the event wearing a mask and remaining 6 feet apart was strongly suggested. As far as the overall atmosphere it seemed like everyone was having a great experience. At the last spot there was local kids that came out of their houses to watch us skate. They were giving us super hero nick names. Zack Waszkiewicz (aka Savage) gave away a pair of his skates to one of the kids. If nothing else I hope we inspired one of those kids to feel like they could be a super hero on blades.

To all of our loyal readers, please do your part and take the necessary precautions to prevent the spread of Covid. With infections steadily rising each day in some areas, large gatherings should be limited as much as possible. We all love our live blading contests as well as other social events and want to return to our normal daily routines as we had before, but right now we should be taking the responsible route to prevent possible harm to ourselves and our loved ones. The staff of Be-Mag are not virologists and we don’t claim to be subject matter experts on infectious diseases but we care about our community and want to keep you all happy and healthy. And we are not telling you anything you haven’t heard thousands of times within the last few months, but pretty please, with sugar on top, wear a mask. Wash your hands. Practice social distancing. Limit your skate gatherings to small groups and lets ride this out and get back to normal.

Be safe. Be Well.