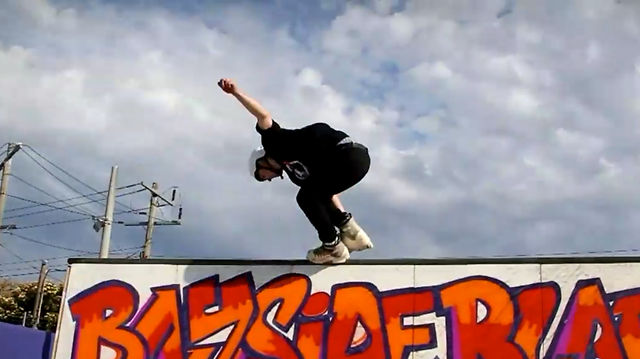 The 2011 Victorian Inline Skating Titles took place on Saturday September 17 at Camberwell Junction Skate park in Melbourne, Australia. The day featured great weather, barbecue and drinks (things got a bit festive on the upper deck but hey, I’ve not heard cheering like that during the underage finals in a long time, and it seemed to get the kids pumped), and there was a “trash ‘n’ treasure” table where people had donated old skate clothing, hardware, mags and videos and the money raised would go back into the next event. This proved to be quite a success, with bargains to be found and ancient copies of Daily Bread magazines snapped up, a healthy sum was raised for RollVic, who like to make a point of managing to have some decent prize money up for grabs at every contest they run.

The recently resurfaced park was brightened up with additional obstacles thanks to the handyman skills of the always-dedicated Owen Parry and Danny Jensen, and the spray can skills of Conrad Bizjak, and the level of skating was worth turning out for, with even the young guns pushing themselves in front of the crowd. Under 12s competitor Luke Pearce landed front flips out of the bowl in the heats and finals with his family watching on, and the launch box was where some of the biggest tricks of the day went down in the Under 18s, with Josh Oldfield lacing a big back flip right at the end of the finals, and Damiano Luzzi from Canberra making the trip down south to claim the Under 18s best trick award with a disaster soul on the box’s downledge.

As for the Open category, I’ll let the footage do the talking, but I must make mention of the winner of the Velvet Couch Clothing best trick award, Brisbane’s Khalil Stenning, who after the contest was over, finally managed to roll away from the first fakie 1080° over a launchbox in Australia. He went down in Aussie rolling history and left the event with a fistful of cash and a blingin’ gold sledgehammer dangling from his neck. Expect to see his name pop up again in the future.

It’s always important to mention the sponsors, Velvet Couch Clothing, Vibralux, Remz, Razors, Shima Skate Manufacturing, and most importantly Melbourne’s finest skateshop Bayside Blades. Without them it wouldn’t be possible for us to have fresh gear to give away as prizes, or cash for the winners not to mention to be able to afford for us to have the event. Seriously, support your local skate shop. They keep your scene alive.

But my biggest thanks go to all that came out on the day. It was a great afternoon of oldskool heads coming out of the woodwork and catching up and amazing tricks from some very old and very new faces; some inspiration for the youngsters from some of the best rollers in Oz. As we were packing up, winner Josh Nielsen came up and thanked me for helping put on the day, and my immediate response was something like “Thank you, man! You came all the way down here, and killed it!”, because that’s exactly why we put events on: to provide skaters an opportunity to come together and skate hard so we can all see something amazing happen.