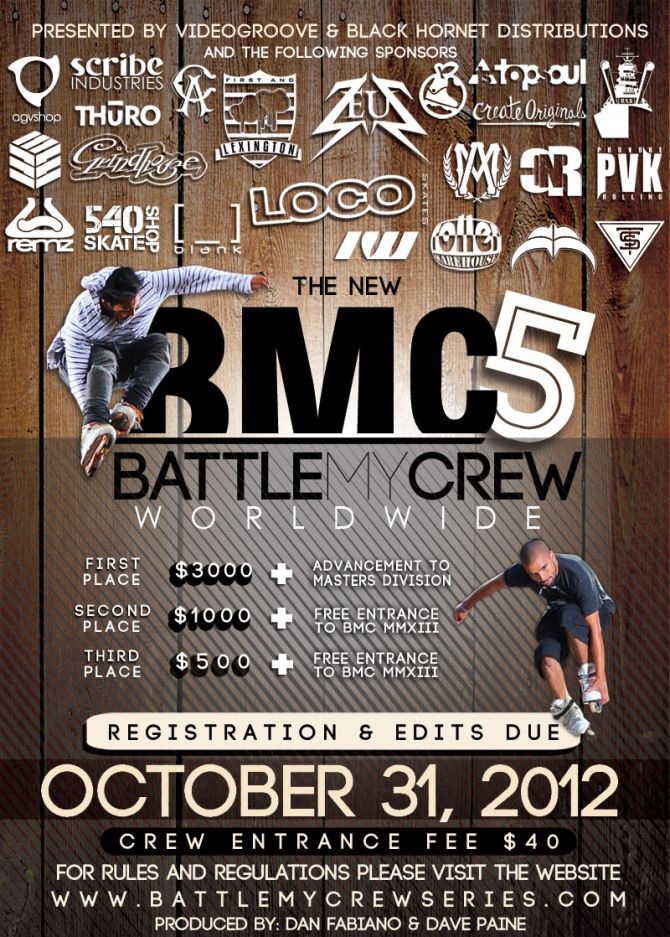 Daniel Fabiano on bringing back Battle My Crew

The deadline for BMC5 is getting closer. How many crews have signed up already?

Currently we have 15 crews that are officially paid in full and signed up with full member lists. We are hoping to reach 20-25 total crews worldwide so the contest is inspiring and grabs the attention of more younger generations to start forming crews and bringing in new blades into the communities.

Any well known crews amongst the contestants?

A few crews from older Battle My Crews have signed up: Zool-Uck from Paris France signed up. They had a very good submission in VG21. New Creation crew from New Jersey has signed up as well. Of course not all the original members are in these crews but it is nice to still see the same crew around and/or progressing ten years later. I have heard from other crew reps such as Collin Martin of the Mersanaries crew in Chicago and word of mouth from people in the JSF crew out in California. I hope to see some more of the originals in the final submissions!

The crews have to consist of at least 6 skaters. What’s the biggest crew that signed up so far?

At the moment the biggest crew consists of 18 members. Again, just to remind everyone – there is no max to the amount of members you can list in your crew! The more the merrier.

How much time do the crews have left to come up with some serious hammers?

We have CHANGED the due dates and deadlines to accommodate the need for more crew registrations. At the moment, we will be EXTENDING REGISTRATION untill the day edit submissions are due which will be on HALLOWEEN (October 31st, 2012). We will announce this on the website, Facebook, and also personally email all the crews that have already registered. The first round of judging will start sometime the first week of November. The winners and runner ups will be announced late that week. At the moment, the TOP 15 will make the cut, the rest will be placed in the bonus section of the DVD and also uploaded online. If entries exceed 40, we will go back to the original rules of 25 advancements and 10 runner ups.

What will happen to the edits that don’t make the cut?

The edits that do not make the cut will be added to a bonus section in the DVD. We still like to give credit to all contestants for their hard work and support. If the DVD cannot hold all the information we will only post the 5 running up crews in the bonus section. All the sections will be posted online in our YouTube Channel & Vimeo channel and on the website after the contest is fully completed and winners are announced.

It’s been ten years since the last Battle My Crew. Do you think this new installment will live up to the old ones?

That’s a hard question to answer. In all honesty it probably will not for the simple fact that VG has been dormant for over 10 years. A lot of the lust and shine it had has dissolved, and people look at VG as a thing of the past, with good memories of our rollerblading history. A good fraction of the inline population has grown up and moved on to other endeavors since 2002, so the participation levels are definitely not the same. Dave and myself expected this, but we hope to influence people to turn their heads and realize that VG is here to stay as long as people want it to!

That’s great to hear. Is there anything you want to say to those crews that are still in doubt about taking part?

Primarily BMC5 is getting a great hype, but people are apprehensive of the return obviously. It was a massive part of our community and inline history. It made participation grow, and put blades on the feet of the young and old. That is the reason we decided to bring it back. Rollerblading needs the inner respect it used to have. This was organized to be a fun event, and to unify the world together in a collective way. On top of all of that, the prize purse is $4500! That is nearly 5 times the amount from the past VG/BMC titles.

A lot of people complain that there isn’t enough money in rollerblading, or that the prizes at contests are not worth the battle, but this is 100% worth every ounce of energy you put into it. You get your name and image exposed in a worldwide duplicated DVD series which could claim you the title of ‘Best Crew in the World.’ A part from the money, you will leave with dignity, respect and pride that you showcased your talents with your fellow crew members for the rest of the world to see. What do you really have to lose! Sign up and enjoy the series!

While some seem apprehensive about the project, most sponsors seem excited about the VG revival. You’ve gathered an extensive list by now. Were you surprised by the support?

We are thrilled by all the support towards Battle My Crew and VG24. A lot of brands wanted to help because of the history Videogroove has. Everyone was disappointed when Dave hung up the skates and moved onto another career. When people heard he was back around and working with me it reignited old flames which generated a lot of buzz for this media event. We initially wanted and needed 30+ sponsors to be able to cover all the prize money, and we are roughly there which is really exciting. We currently have 25 confirmed and paid-in–full sponsors, which is right on track.

It would be amazing to round up another 5 brands but we are already fortunate enough to snag the brands we did in the state of our rollerblading economy. With events like the Blading Cup and the NYC Invitational around the corner, people’s wallets and accounts are slim for the picking. I think it is amazing that 25 brands put up MONEY for a DVD media event. Everyone knows that media and DVD sales have been down tremendously the last 3-5 years, so to see the support on this was breathtaking.

Upon the positives of having all these brands help this event, each brand will get a great deal of recognition and exposure between constant updates on Facebook, the main website, the final DVD and rollerblading media websites such as Be-Mag, One Mag and more. The event lasts from June 2012 to April 2013, so there is a great deal of exposure for any company involved! It’s not too late, if you want to participate and sponsor this event please email us at: info@battlemycrewseries.com. There are 5 spaces available, and you still have 8 months of brand exposure through VG24.

You also found some time to update Battlemycrewseries.com with some great VG Flashbacks. So far we’ve only seen edits from BMC 4. Can we expect older footage to pop up too?

I will try my best. There really aren’t that many Battle My Crew edits from previous years online already. You can find a few, so I may link them on the main page. I personally have been uploading them myself every night whenever I have time. If I get around to it, I may hook up the VHS player to the capture card and start saving some BMC2 & BMC3 edits. We shall see. Keep looking at the website or Facebook for updates!