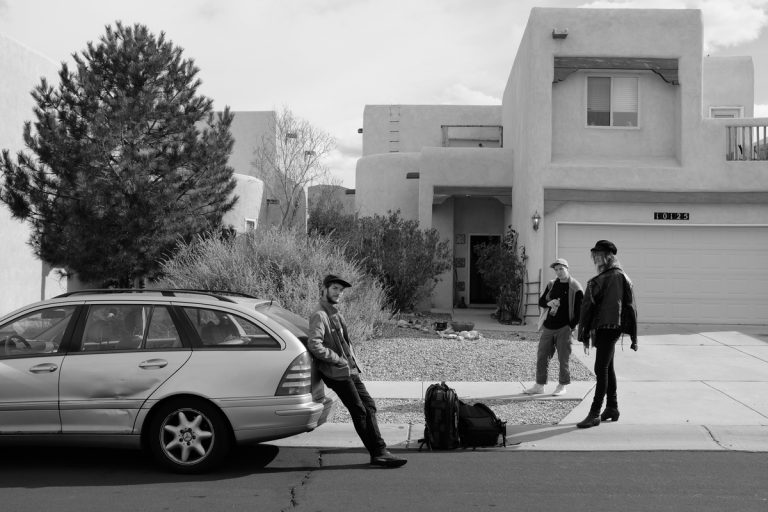 DEAD WHEELS: CHAMPAGNE HAD TO BE MADE

You know about the recent resurgence of vinyl records and how music connoisseurs claim that there is no better feeling than listening to your favorite music on vinyl. It’s the warmth of the sound, the album art and the experience of listening to an album as an integral work of art. All those factors add up to the feeling of appreciation of an artist’s effort and his struggles in the creative process that result in the piece of art, such as David Bowie’s The Rise and Fall of Ziggy Stardust and The Spiders from Mars or The Beatles’ Sgt. Pepper’s Lonely Heart’s Club Band.
Immaterialisation of the physical media that we witnessed in the past half decade has had a dual effect on media production in rollerblading. On the one hand, it has helped the proliferation of quality free content and VOD’s that cost less to produce and distribute and help the skaters and videographers cut out the middle men and get their investment back (at least partially) more easily. On the other, the fact that everything is so convenient, at our disposal at the touch of a button, has made us less appreciate the content we consume and enjoy, to forget the skater’s struggle in landing the trick, to forget all the work, all the hours spent on the road touring and filming, sleeping on friend’s floors, making ends meet and eating out of hand during the days on tour.

That’s why Adam Johnson’s decision to make a u-turn and go back to production of a physical DVD, accompanied y a book and a set of wheels for the release of the Dead Wheels team video Champagne is parallel to a record company releasing an album on vinyl. Champagne is an integral experience, something to touch, to smell, to look at before putting it in the DVD player and watching it.

And then, there’s the skating. Arguably the best street skaters in the world. Alex Broskow, Chris Farmer and David Sizemore. AJ decided to let David take over the helm in directing Champagne, understanding that his vision is what Champagne needed.

Together, like a larger than life rock ‘n’ roll band, they made a masterpiece, a work of lasting value. What you’re about to read is a short interview with the Dead Wheels team about how they made Champagne. 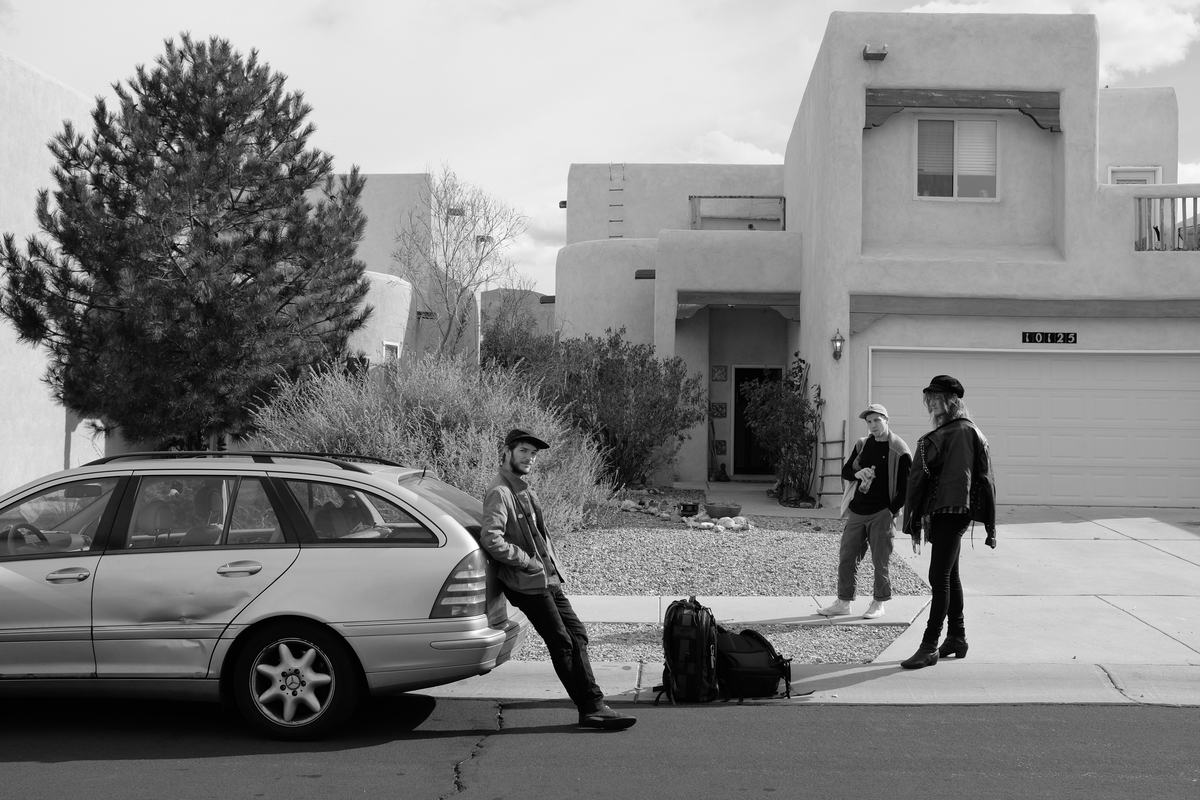 So, what happened? How did you guys end up making Champagne? And how did you decide on the locations? How small was the budget for filming? Did you set any specific goals for yourself in the making of Champagne? What surprises can we expect to see in Champagne?
AJ: What happened is ambiguous so I’ll say life. We decided to make Champagne for several reasons, but the underlying one was that David was going to move to Denmark and real life was catching up with all of us. If we were going to have the opportunity to make a team video the only chance was to start filming last May.

Budget wise, we only had the money I was able to get from freelance projects. Dead isn’t in the position to have the amount of money needed to create a skate video tied up for a year. As a brand the money we use to make wheels and soft goods goes right back into production, marketing, etc. Champagne on the other hand is all out of pocket for us.

We didn’t really set goals to begin with, but if I could do it all over again I would have set the goal to have more fun. Filming with me can be stressful, and I think I put a lot of pressure on the dudes to make sure each trip was getting a return on investment rather than enjoying the moment. Personally I wish I would have let myself get caught up in the moment more, instead of focusing on executing and producing. I think the real surprise is champagne itself. Very few people knew we were making a video, let alone a companion magazine. People should be pleasantly surprised with the physical aspect of the video. 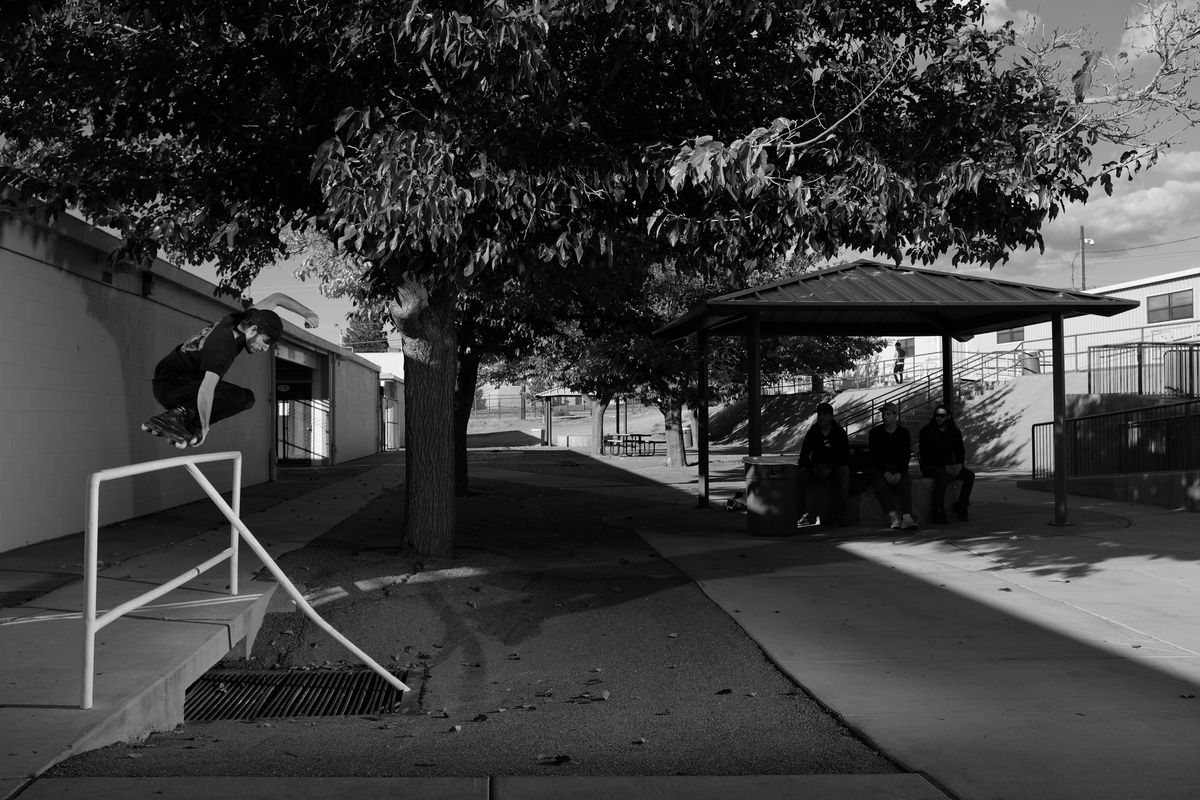 You added Sizemore to the Dead team not so long ago, do you see him as a natural addition to the team, or as a completely new asset, bringing a different flavour to Dead? Is the age difference between him, you, Farm and Broskow a factor in the team or did he fall in like a Lego?
David is both a natural addition as well as a new asset. Everyone on dead brings something to the table and David brought a great work ethic, unique eye for filming/ editing, and obviously his skating talent. As far as ages go we are all adults at this point, just trying to make it work. Sometimes his age showed when he wouldn’t get references to old VHS skate videos that Alex, Chris, and I grew up watching.

Almost a year after we spoke last time, a lot has changed, your focus narrowed to Vlux and Dead?

Sure did, and I’ve been doing a poor job with Vibralux. Now that Champagne is through the production stages and we aren’t touring I think I’ll have more time to focus on implementing some of the strategies and products we have been scheming on for both Vibralux and Dead. 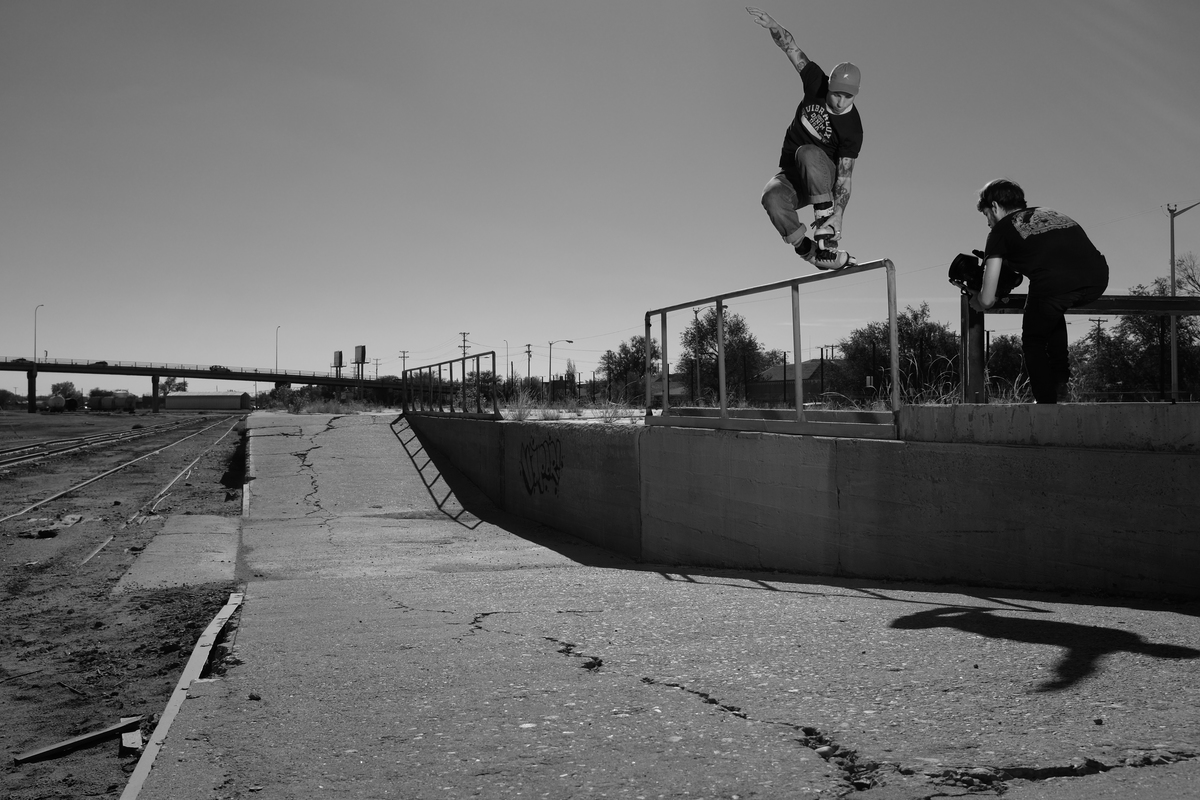 I never really understood your creative process in rollerblading. Like in Bleached and Nowhere, a lot of your stuff is just completely unexpected. Some people like to write down tricks on certain spots and try them till they’re done, is it the same with you or you just go for whatever feels right at the moment?
Broskow: That’s kinda the point, no one wants to see someone fishbrain the same rail for ever, it’s also more fun for me to try and do different things. But in the long run I just want to do things that I think will be cool and fun and look good. When you have David and AJ behind the lens you know it will be filmed right. I don’t think any one thing in particular is challenging, every time is different with its own unique challenges. I wouldn’t say I have a list of things I want but I usually have a list of spots. And a mental list of ideas then it’s just finding the right spot for that idea. But most of the time especially when skating new cities it’s on the fly. Having David, Chris, AJ and Shawn around makes it a lot easier to get ideas. With a little help from your friends ya know. 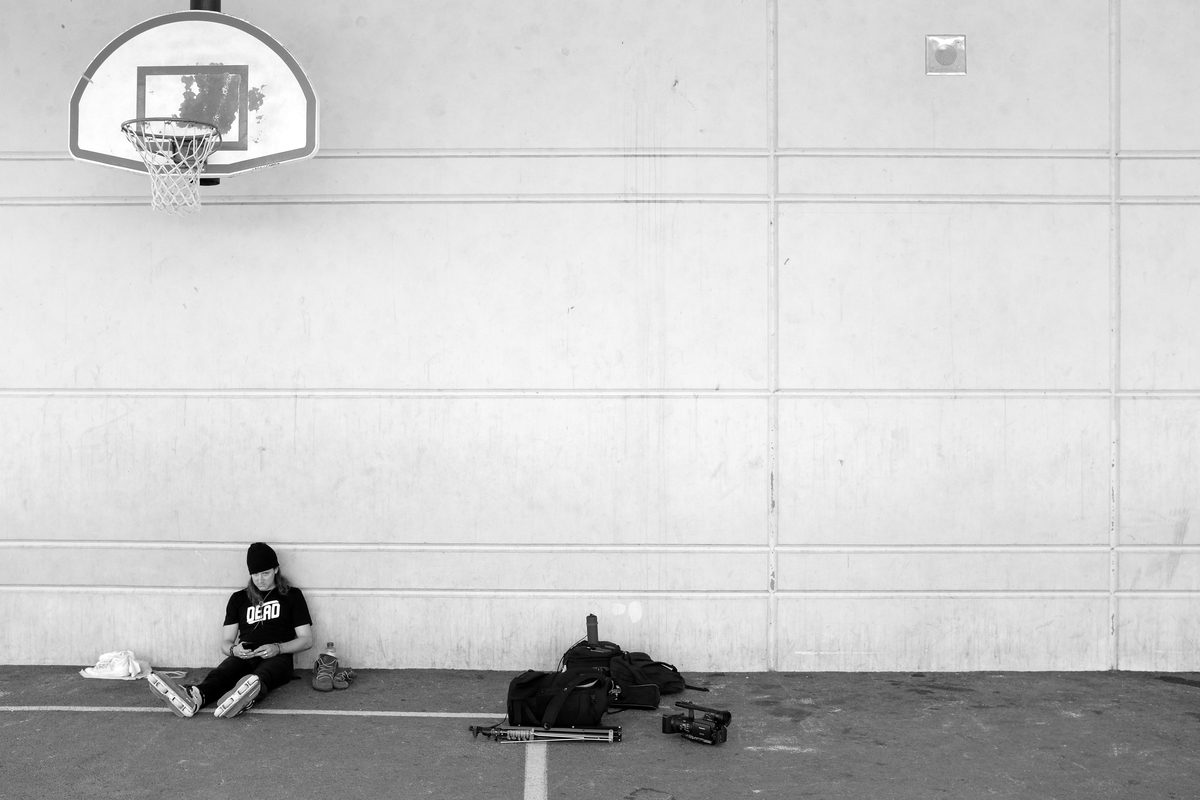 Chris, you have been one of the most influential bladers in the game for 15 years now. You set trends, from trick selection to fashion. Do you ever think to yourself, I’m doing this now and it’s going to be the next big thing? Did you feel like Champagne is a new milestone for you or ‘just’ a section?
When it comes to gear, I’m going to wear whatever feels comfortable… When it comes to blading, I’m fully driven by impulse… I’ve never been a fan of planning out tricks or spots before hand, whatever happens in the moment is what happens… If a certain spot catches my eye while driving around and I’m able to convince myself upstairs that it makes sense and will all work out in the end, that’s it! It’s rad to see an influence transpire, but by no means has it ever been conscious effort… As far as Champagne, it’s special whichever way you want to cut it… Our first video as a brand, David’s first full-length video he’s ever made, we traveled/filmed the whole video together, etc… A true team effort.

Having been back from Europe and filming for Delfon Dio, do you think it changed your perspective on what you want to do with your blading and trick selection?
Sizemore: I wouldn’t say being apart of Delfon Dio changed my perspective on blading, but rather sharpened it. For a while now, I’ve known what tricks I enjoy to do and for the most part know what kind of spots I’m looking for. However, being around that many different styles and personalities at each spot can help you learn more about yourself, and what it is that you bring to the table. 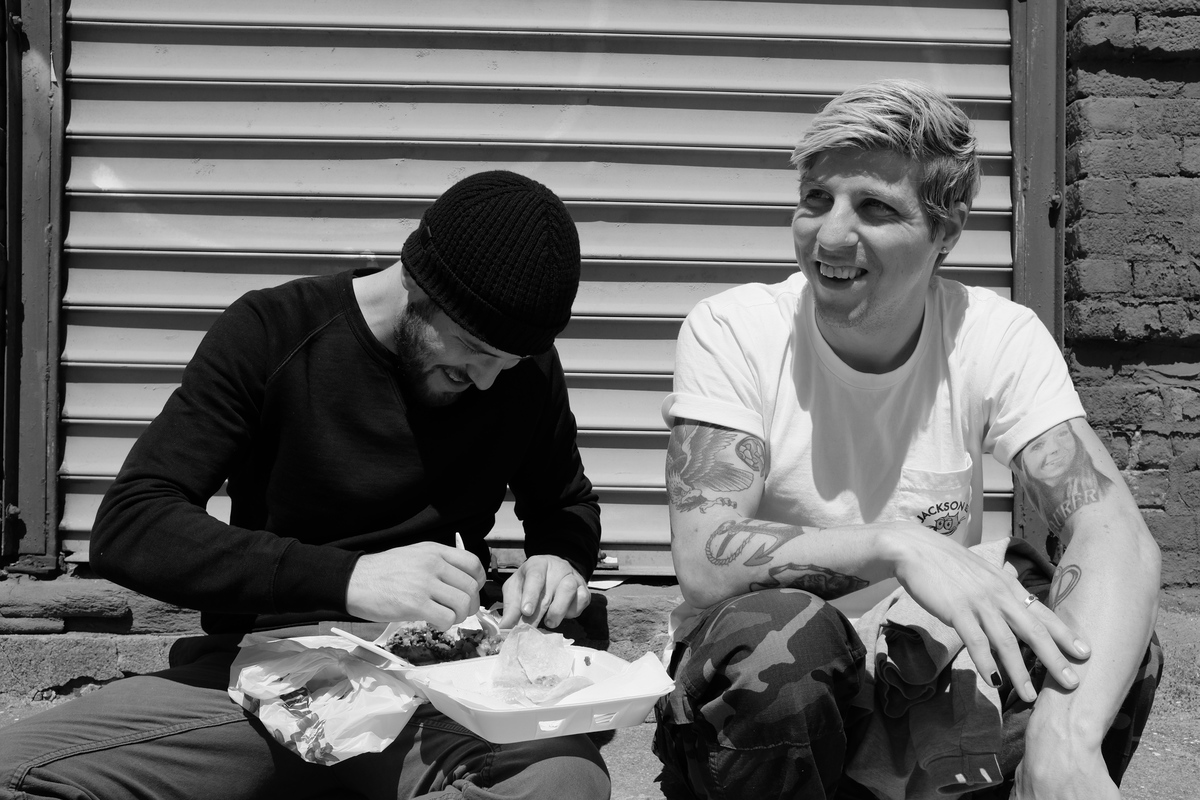 How do you like being a part of the most exclusive pro wheel brand and team in rollerblading?
Sizemore: I feel fortunate to have Chris and Alex’s trust to work with them on this level. And as for AJ, we owe it all to him. We’re lucky to have someone so dedicated to put forth the effort for a brand that helps us keep growing.

Where did you want to take your blading with your section in Champagne? Do you think it reflects your personality in a proper way?
Sizemore: I wanted my part, and the video as a whole to reflect an emphasis on rolling, since it’s a video representing a wheel company, and the root of what we do.
For my part, I concentrated on lines and interesting surfaces to roll, and I’m proud of the way it turned out. When filming / editing, I kept close attention for any opportunity to focus in on the wheels themselves, or the rich personality in Chris or Alex’s approach to their tricks. 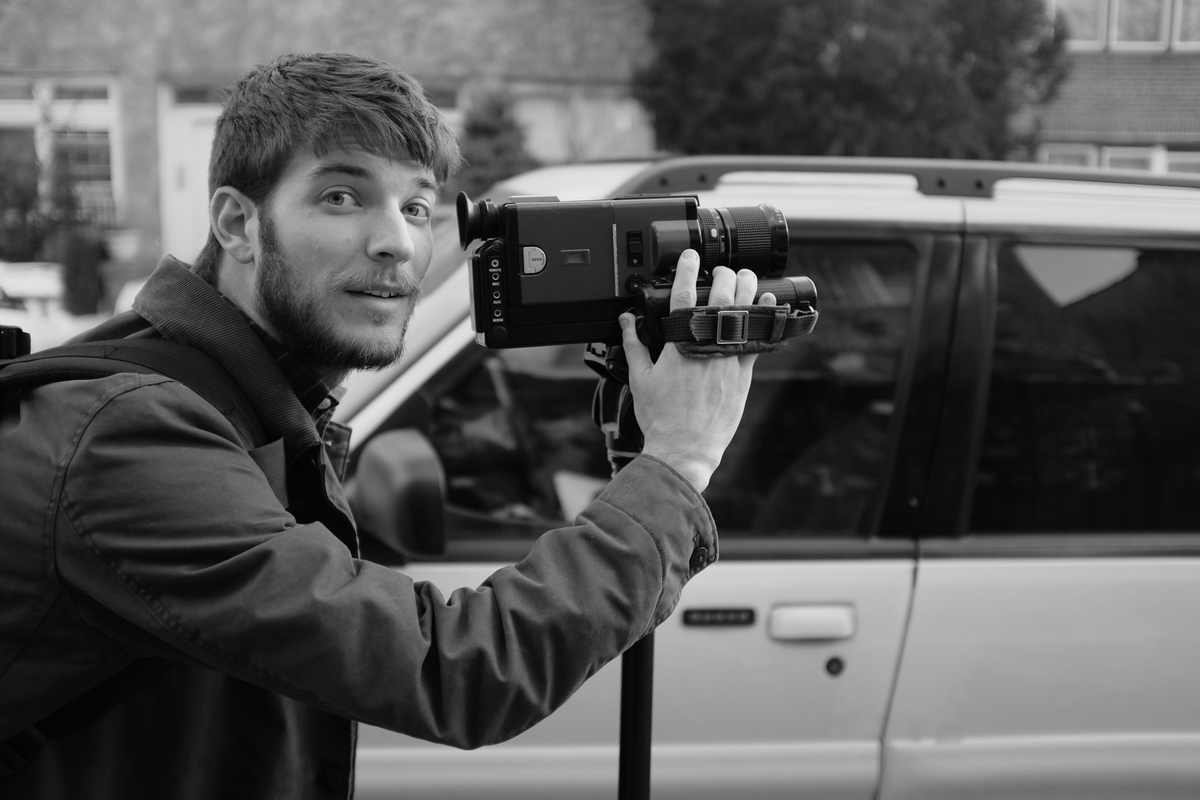 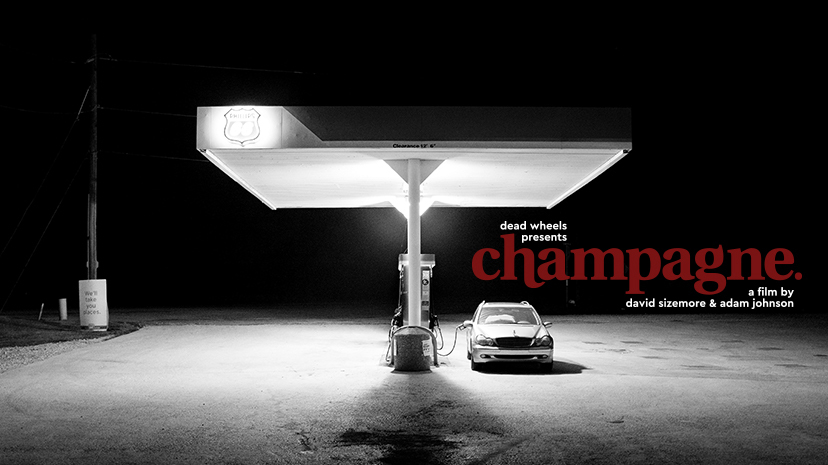