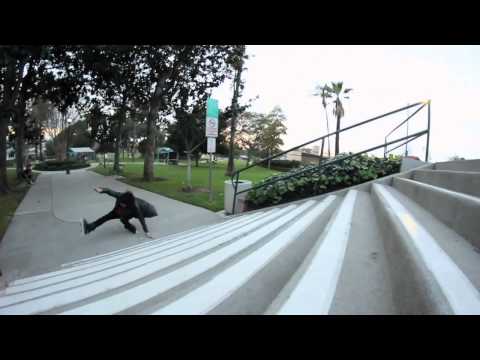 YOUR WHEELS ARE DEAD. That’s the slogan to be found if you check bladingisdead.com.
Behind that statement one will find the brand new wheel company of Alex Broskow and Chris Farmer.
Having the feeling that something is missing they decided to team up for this one. Find out what they have to tell you about DEAD!

Hey guys. Whats “Dead” exactly? A wheel company or different kind of products?
Well, it’s definitely a wheel company.  We will always release a minimal line of soft goods to coincide, but the main focus will always be the wheels.

Why did you decide to start a wheel company right now? One could say its not the right time?!
Since the demise of 4×4 there weren’t any wheel companies out there that we felt represented rollerblading the way we envision it.  So, the next logical step was to take it upon ourselves to correct this.  We figured since we are still strapping up everyday and hitting the streets, and since we don’t plan on leaving skating any time soon, we might as well have some stock in the future of what we love.

Lately there came up some other new wheel brands and it seems like everyone can put a design on some wheels. Are you working with experienced manufactures? Whats special about the wheels / why should people buy your wheels?
Exactly, that’s why we are taking a minimalistic approach to our wheel graphics.  There’s no need to get in depth and detailed, since the graphics wear off completely in a few sessions.  We aren’t trying to sell anyone on some sort of gimmick, bottom line is that you’ll be rolling on the best wheels on the market, graphic or not.  We chose our manufacturer for that very reason, we feel they produce highest quality product that’s suited best for what we do.  AEND has been making the highest quality urethane in rollerblading for a long time now.  Time for people to put their misconceptions about who makes the BEST wheels aside, and take a set of Dead Wheels for a test ride.

The team is only you two guys? Or do you plan on more riders?
At the moment, it’s just us two.  We do have Future Prospects in mind and are planning on expanding the team with a few Am’s in the near future.  We feel that in the beginning stages of a company it is important to focus on the branding and the identity of a company.  Too many riders and you get a convoluted sense of who and what the company is all about.

The name is pretty provocative. You really feel that blading is dead or you feel like its the time for a restart?
To the outside world, rollerblading is completely dead.  We don’t necessarily think we are any sort of answer to what will bring blading back to the masses, but we believe our company represents what needs to be seen for now.  Clean and simple, no bells and whistles.  Made in America, not by skateboarders.

Who is involved in the company (business wise)?
Four people.  Alex, Chris, AJ, and Nick Stahl.

Do you already got international distributers?
Sure do.  With Aj’s background in the blade game’s business side, he was able to set this up with loyal distributors around the world.  The full line should be available worldwide in the next few weeks, and if you can’t seem to get your paws on some wheels, let us know!

When did the talks about doing a company together start? And why did you feel like you two should work together?
The idea of a wheel company had been there for awhile now, but things began to manifest around 4 months ago.  We’ve known each other for over 10 years and have worked successfully on various projects over those years.  With us now living in the same city and in a close vicinity of the other’s involved, it just makes sense. Being able to control the image of the company over coffee or beer is better than emailing back and forth across the country.

Is there any special marketing activities planned to promote the brand? Tours or videos? Print adverts, online? Whats important for you?
All is important.  We plan to build a solid online presence, since print media is fairly minimal these days.  We would love to do a video in the future, but until then we’ll focus on web content.  We are currently filming for something that will be released sooner than later and plan on doing something special for Bittercold.

What you think is missing in this industry?
Companies that look cool, have real teams, and make quality products.

When can we expect the wheels to arrive in the shops and what will be included in the first line?
The wheels will be available this week and the shirts should be coming in a week after.  The line consists of Alex’s 58/88, Chris’ 56/92, and the DEAD logo t-shirt in white and heather black.