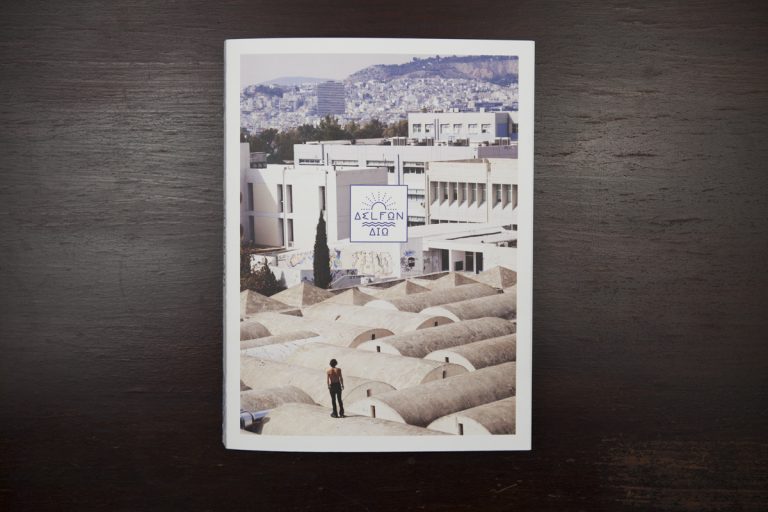 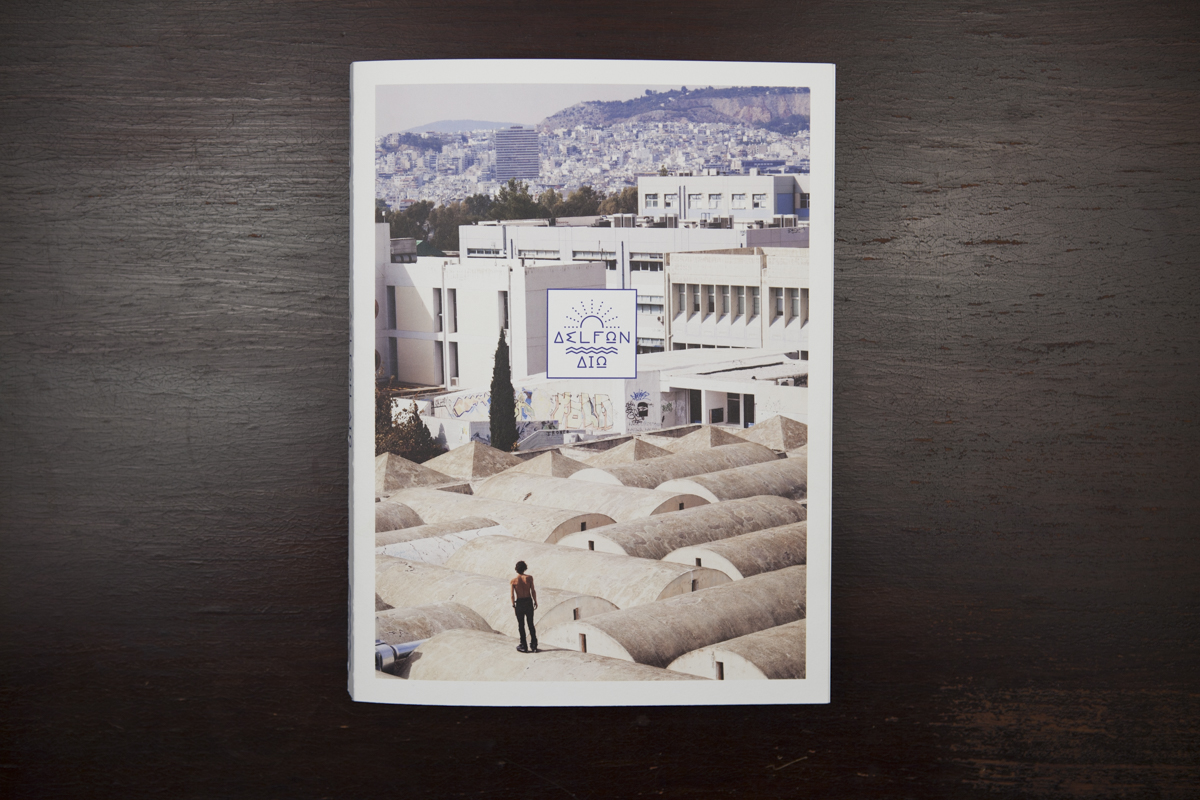 David Sizemore, Chris Farmer, Chris Smith, Dominik Wagner, Joe Atkinson, Richie Eisler, Scott Quinn, Carson Starnes, Karsten Boysen, Benjamin Büttner and Freddy White, all in one book, accompanying the Cayenne II: Delfon Dio tour video. Be-Mag wouldn’t be what it is if we didn’t grab the opportunity to find out the story behind the project, with the book authors Freddy White and Dominik Wagner. This time, Freddy is on the opposite side of the microphone.

A first limited run of the book is now available for preorder as a Winterclash special. Get the book here. 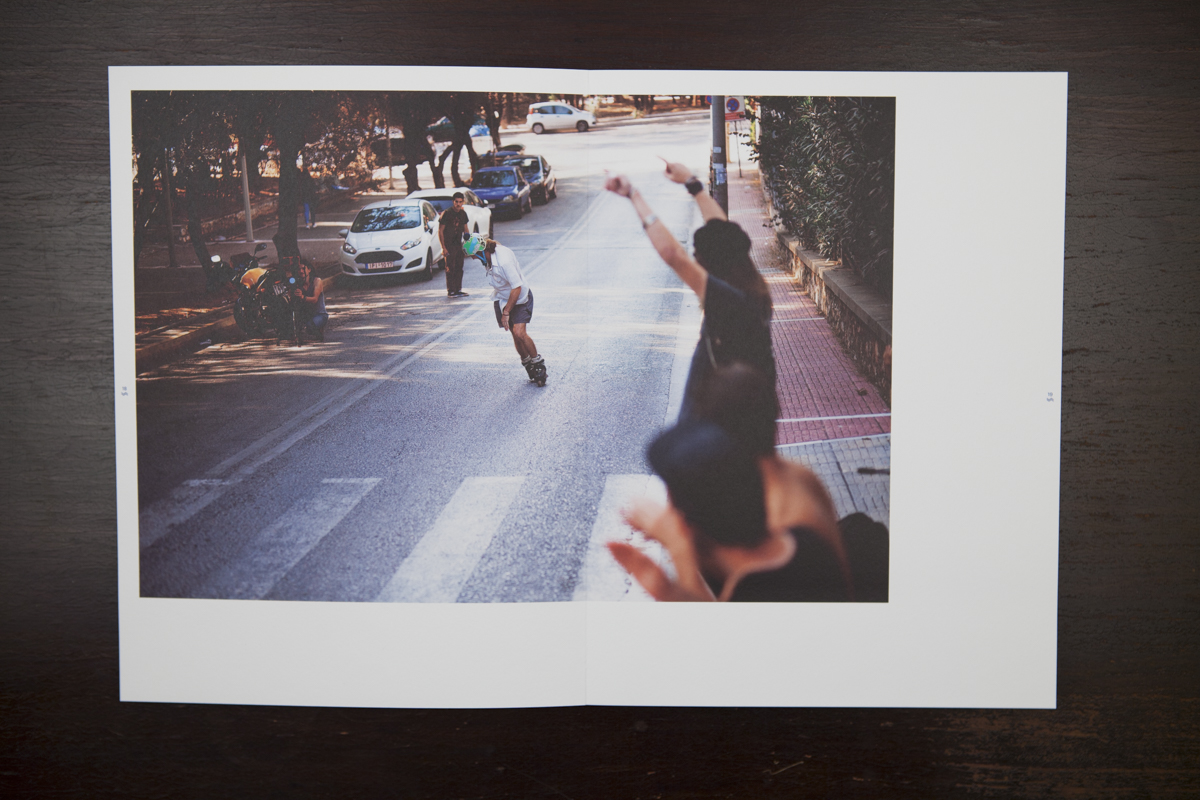 What the hell happened in Greece?
Freddy: Well, to quote Mr. Farmer again: “we ate a lot of tomatoes, a lot of feta cheese, and there was a lot of fucked up shit done on the blades.” That sums it up quite well: the Cayenne crew got back together for another banger, three intense weeks of blading in Greece, all captured by the talented gentlemen Boysen & Büttner for what’s going to be the second Cayenne video. The name’s Delfon Dio, and you better get ready for something really, really good!

Will Delfon Dio stand at the top with other classics like FOR, Leading the Blind or the KFC videos, or Mindgame videos? The trailer looks like it could?
FW: It’s not really for us to say, but we sure hope people will like it. What we can say is, some of that footage will indeed make history. Some of the tricks will, and some of the spots too. What we hope is to produce something that will put a smile on the viewer’s face, give them the urge to go blade, and that people will keep on watching for a while… Possibly until we come out with our third project ahah! 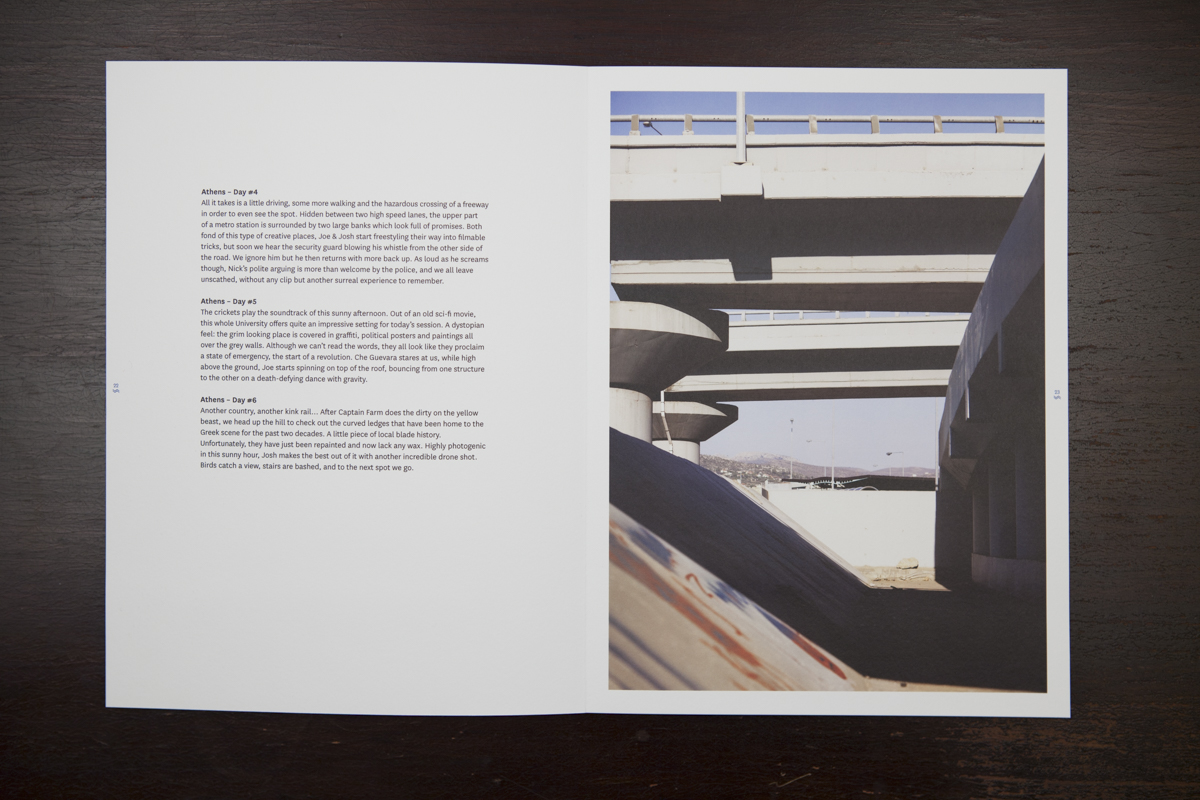 How did you decide to go with the guys on tour? Did they invite you or did you just tag along?
Dominik: Actually I was invited for the first tour, but at that moment I was busy making money for my winter escape plan so I turned the offer down. When the tour ended up in Berlin and I came to hang out with the crew on their last days on the road I regretted my decision, but I said to the guys if they ever were going to do it again I will be on board!

What made you decide to make a book out of the project?
FW: It was something I really wanted to do last year with Cayenne already. Ideally with more funds and time, we could have pushed the .pdf that was included with the VOD into an actual print book… Fortunately, this year it was decided from the start and here we are! Making another book together, only this time it’s going to be even bigger & better!

DW: Yes the idea was there for a while, which I guess was also the reason to invite me to be the tour photographer, and not a necessarily as a skater. Freddy and me have been working together on a couple of books before so the decision kind of felt natural. To me it’s awesome to see how we went from our first project, a black and white fanzine which we paid out of our own pockets, to a full on, high quality book! 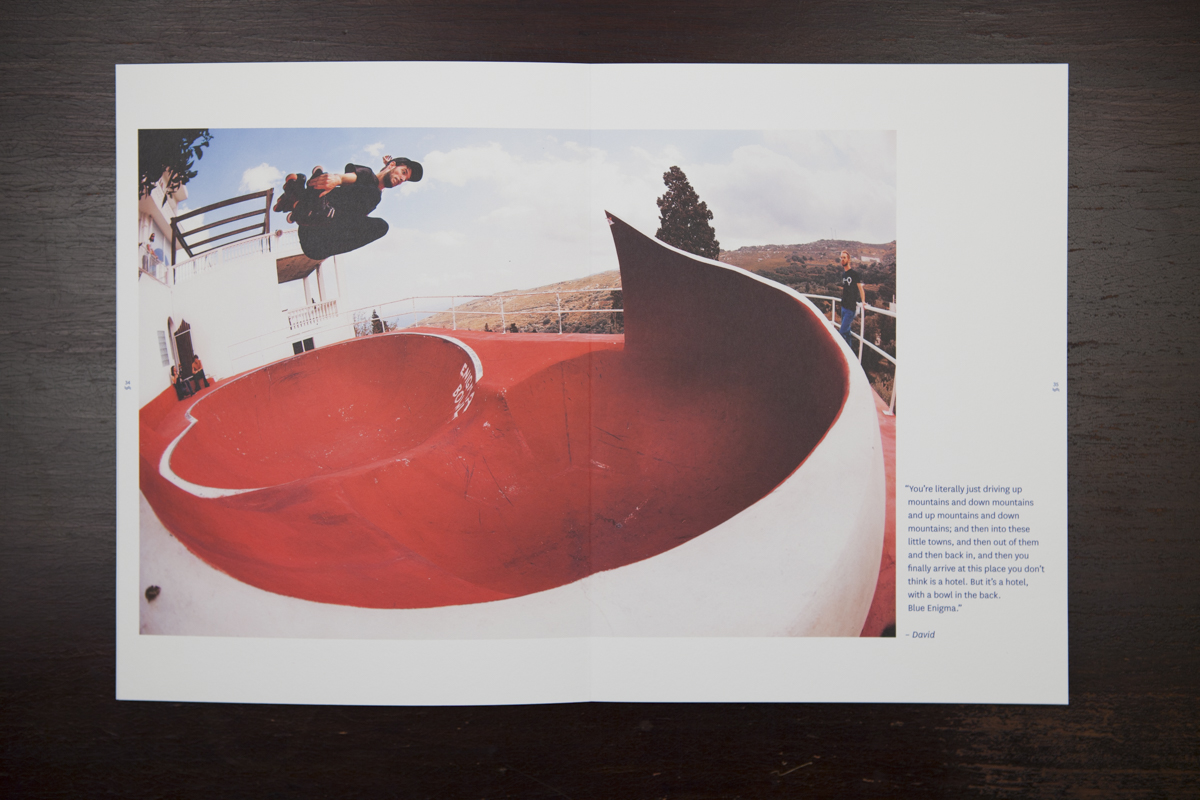 How many pictures did you have to go through and how many did you have to decide to throw away?
DW: Overall I shot around 6000 pictures on tour. I went through all the photos once I was home and ended up with around 500 pictures that you could call useable. In the book I used 50, I have to say though that a lot of the pictures I didn’t use in the book will not be thrown away, as I am planning on using them for some promo stuff for the video and so on.

Is it more of a book with lifestyle shots, or more with action shots?
DW: I think it’s a good combination of both. While editing the book it was very important to us to recap the story of our tour and to create a feeling for the people and places, while at the same time I also wanted to highlight the amazing tricks that went down. 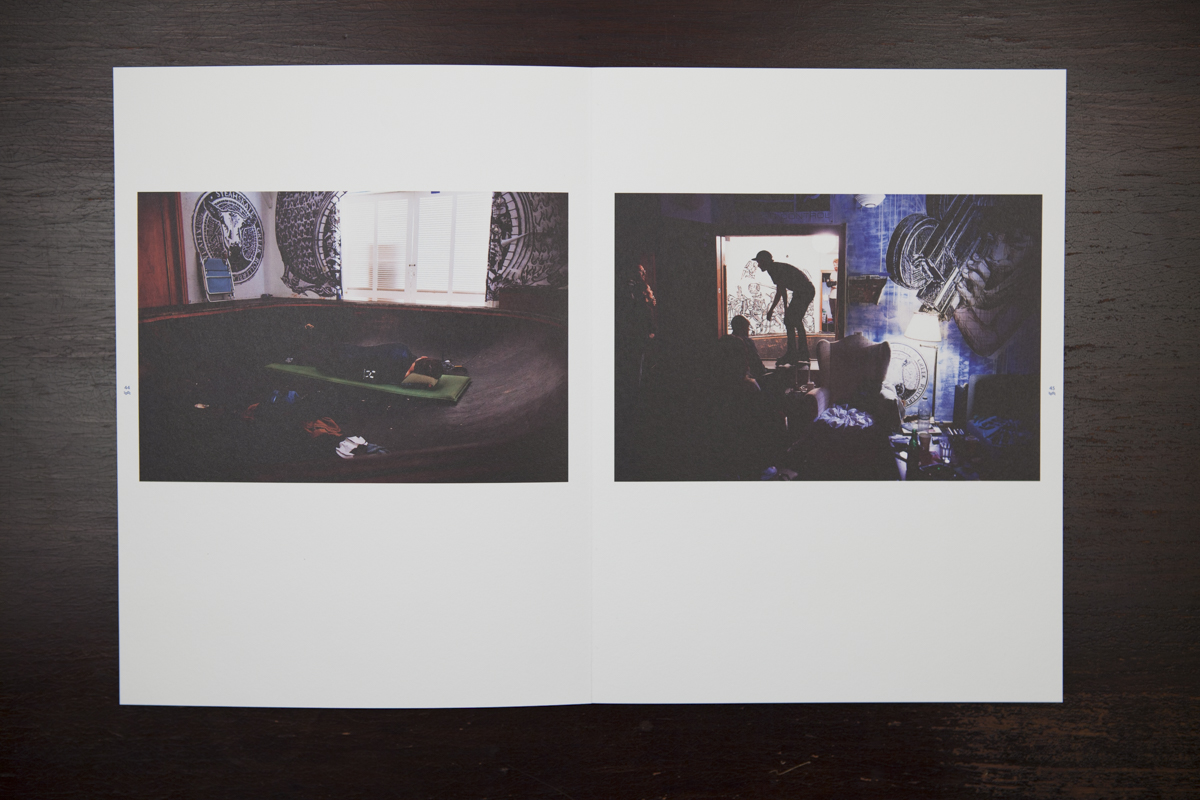 What about the text & written words?
FW: This one has been an unusual process for me, and rather tedious I might add. Usually, you’d start with a blank page on which you’ll try to build something out of your personal notes and memories. But this time the process was the exact opposite: having kept a journal of the whole trip in addition to more specific notes, I came back with 40 pages of detailed notes, to which you’d have to add another 15 pages of transcripts of our audio interviews with the crew…

Basically, this time it was the other way around, in a way quite similar to the way Dominik works with the photographs, or Karsten & Benny with the video: collect a whole lot of material, and then trim down the fat to only keep the most essential bits, the little parts that make sense, the small bits that might seems unrelated but when put all together, tell some essential parts of the story. 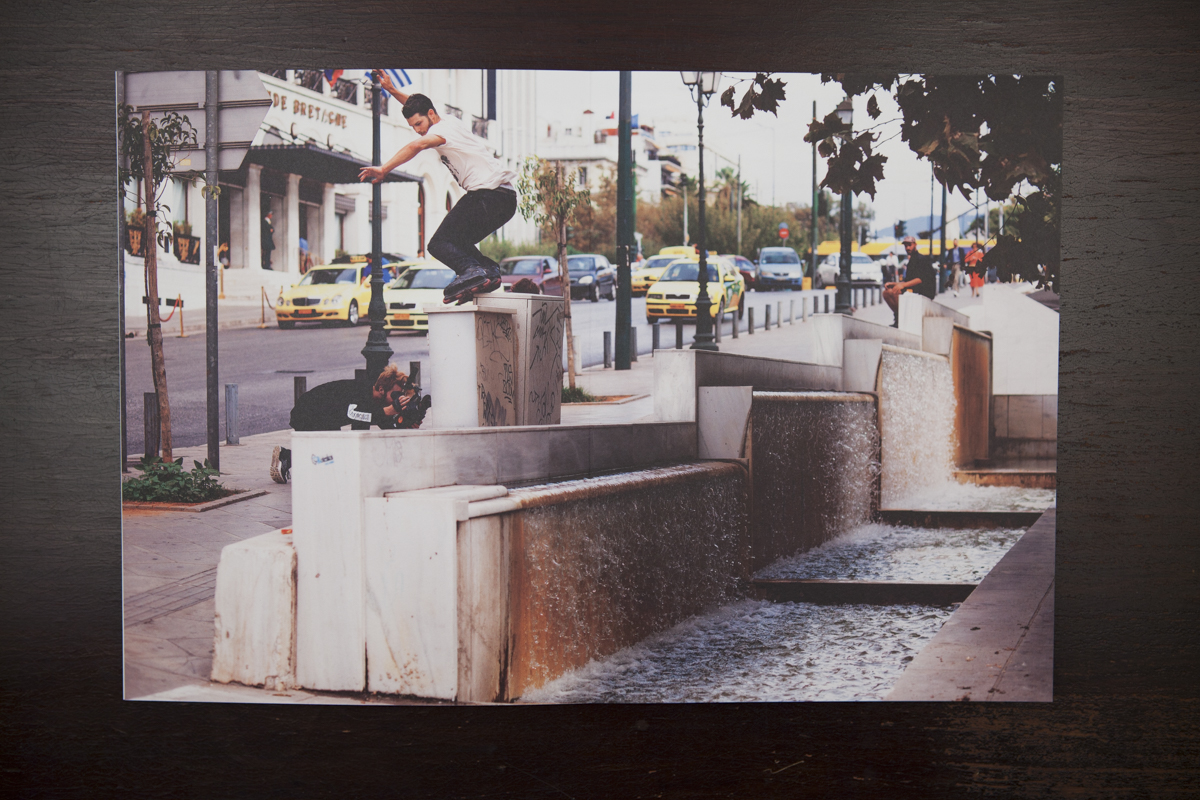 You make it sound like both the photographs & text connect in some way, right?
FW: Precisely. This is our third project as a duo, and at this point I feel we know each other well enough for all the decisions to come together quite naturally. Same with our workflow, too. For this specific project for instance, we knew we wanted to keep somewhat of a chronological timeline through the book, which in itself led to the idea of the journal for the text.

Reading some old issues of Daily Bread again recently, I remembered these „play by play“ tour reports and I guess we wanted to achieve something that would have this throwback feel, while pushing it one step further. Not necessarily focusing solely on the tricks, but also random moments and small parts of our adventure which in the end, when you put all the photographs, text & quotes together, give you a very detailed insight into what truly went down during these three beautiful weeks.

And I feel it works, also because of the many, many hours we’ve spent working on similar projects together, and getting to know each other’s dirty minds a bit better ahah! 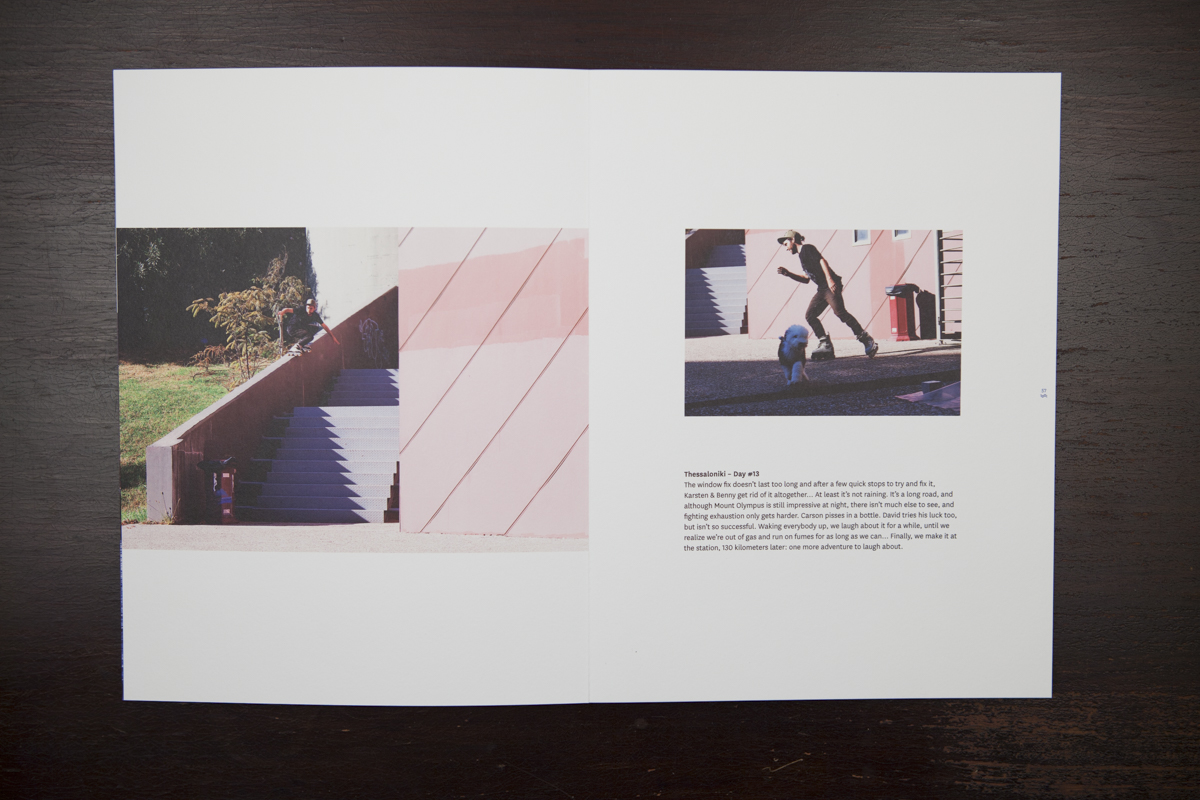 How does a book making process look like?
FW: Too many hours spent in front of the screen… And many talks back and forth until we end up with something that’s the sum of all our visions! A big part of the process consists of trimming down the fat from the huge amount of material we’re working with, and it’s a long process. As I said, we had a pretty clear idea of what we wanted from the start, but reality and its many constraints also plays a big part. So in the end, it’s all about juggling with the time & financial limitations, and agreeing on the necessary steps to make it all work in the end.

DW: Usually the first thing I do is to narrow down the photo selection as much as possible on the computer, after several rounds of going through the material and kicking out pictures I print out the pictures I want to work with, plus a lot extras that I am indecisive with. Then I lay them all out to get a better overview and to see which pictures are too repetitive and if there are cool combinations, this also helps me to kick out even more pictures. After that I start to work on a layout, first with the prints and then I transfer my ideas into InDesign and send it over to the graphic designer…

FW: Our good friend Jonas Bødtker, who’s in charge of the graphic design and visuals for the video, is doing the layout and it’s a privilege to finally be able to work with him since he’s also passionate about the object that is a book in itself!

DW: From there on it’s a lot of communication about ideas and to do lists, the search for a good printer, money talks and a couple of reality checks. Once we are done with the layout and wait for the text, I will start retouching, during this process there a couple runs to the printer for some test prints and color proofs. All in all it’s a long process, many short nights, a lot of pizza, big time pressure and at least one skipped deadline! But in the end once you hold the book in your hands you know it was worth it.

FW: The pizza is definitely the one thing that helps us make it through the last week’s rush and too many short nights! 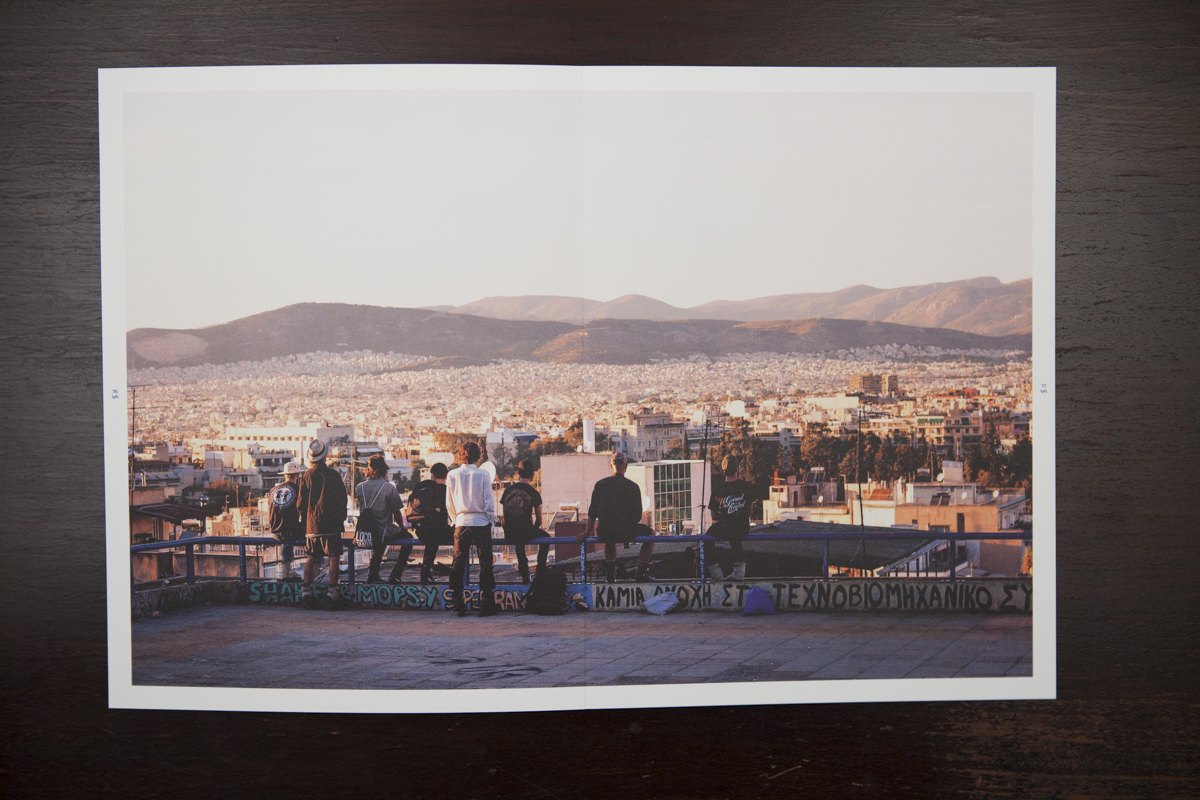 Freddy, you’ve been on the road a lot these past years, can you tell us why this tour was different than others you attended?
Besides Greece itself, which is beautiful, and the people there, who are truly incredible, the most striking is the overall level of professionalism of everyone involved, both in front and behind the camera. At this point, everybody knows how talented these guys are, but what you don’t see is the hard work and self discipline that goes with it.

Everybody handles themselves like true professionals, in the strict sense of the term. If you think all it takes is being able to lace a hammer every now and then, you just don’t have a clue. Filming such a project in just three weeks requires a level of consistency that very few possess. These guys have it, and blading should be grateful that there are still people of that caliber who are willing to go through all the rough nights on the floor, jet lag, long car rides, hard falls and physical exhaustion just to produce a piece of entertainment for all of you to bootleg and watch comfortably at home… While these guys don’t even make minimum wage.

That’s what stands out, to me. The level of dedication and hard work to keep on producing high quality content while the industry is crumbling all around us, all with a smile on their face. They are blading’s true heroes, and I wish more people realized this.

Get the book here. 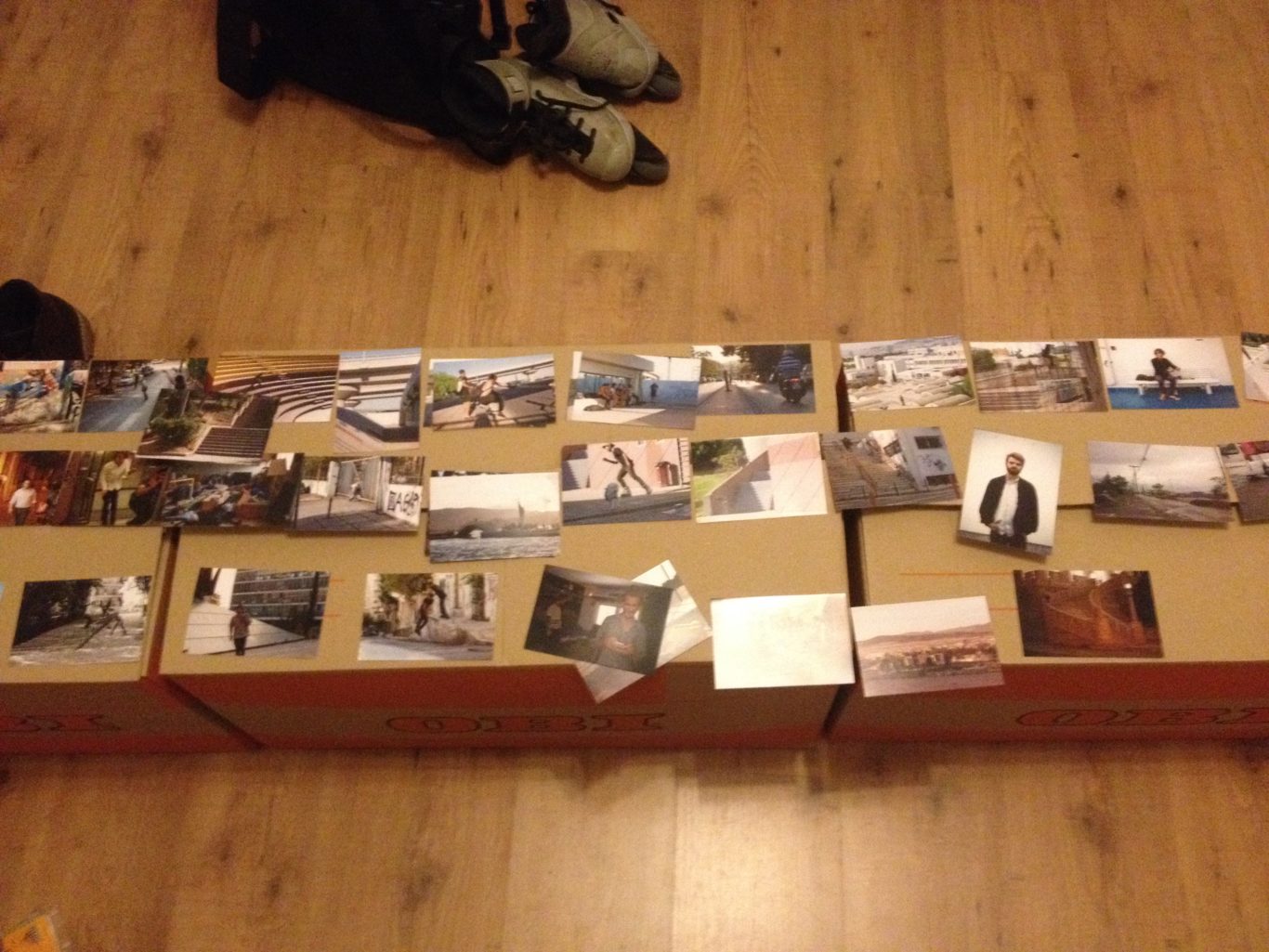 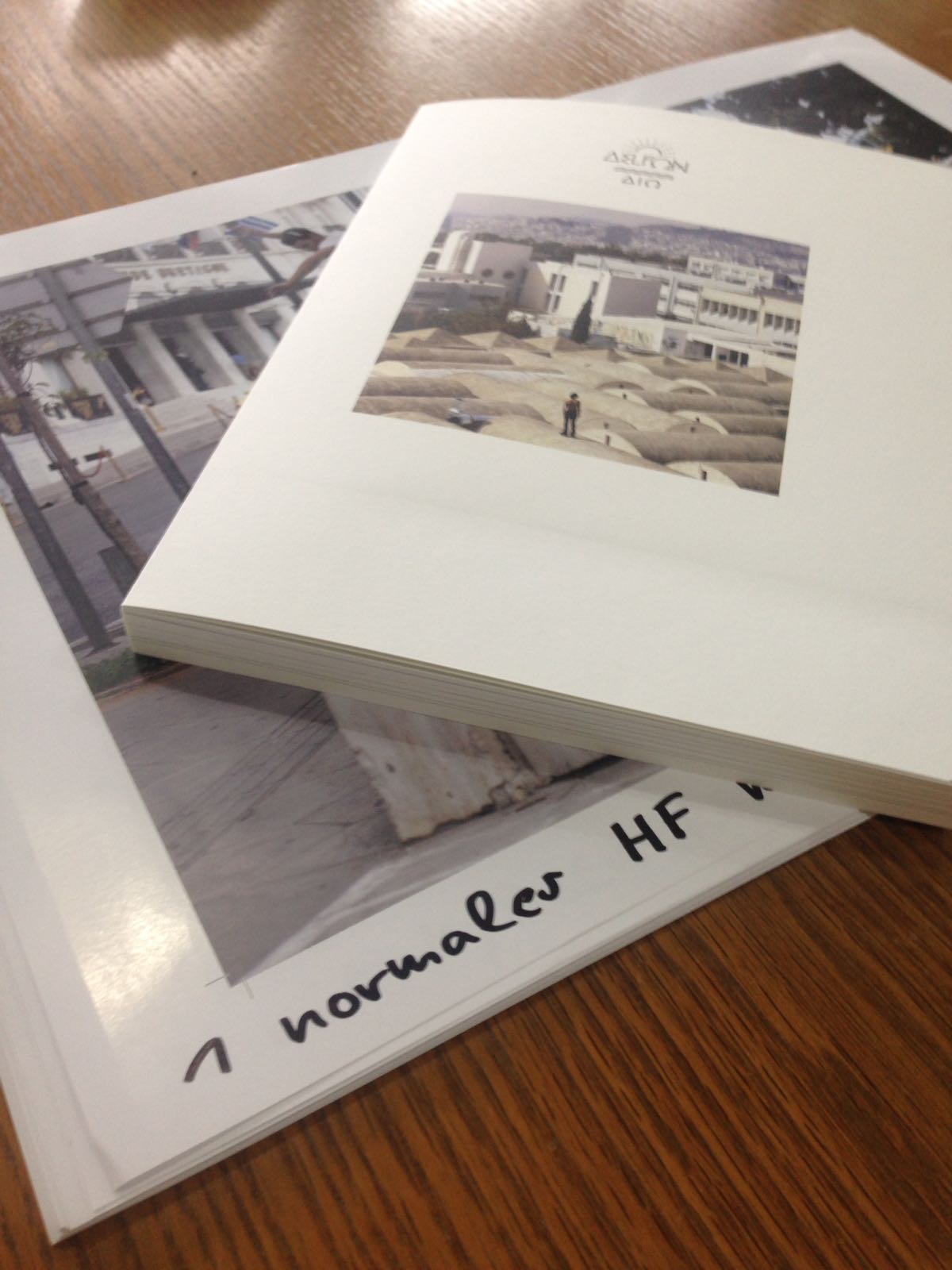