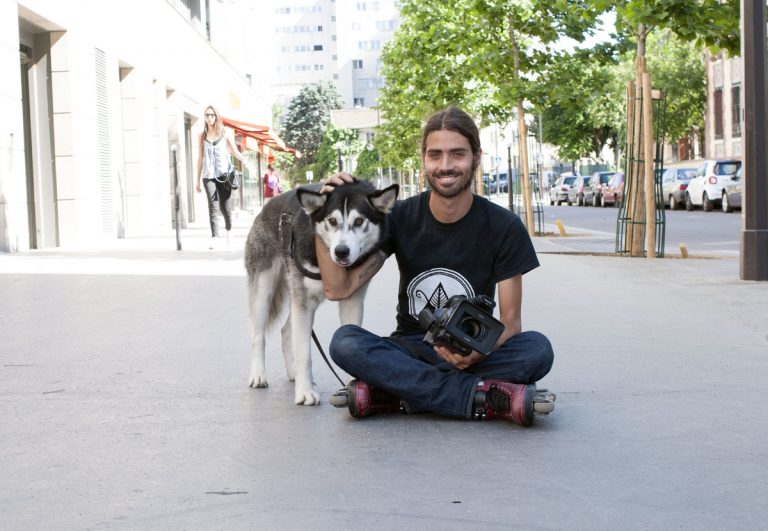 WHAT THE AVALANCHA CREW SHOT IN PARIS

When Cavin Le Macon heard from Marc Moreno that he and the posse wanted to visit Paris in the summer for filming for AVALANCHA he took it upon himself to be in Paris and make sure they had a good guide, and that’s how this story got started. 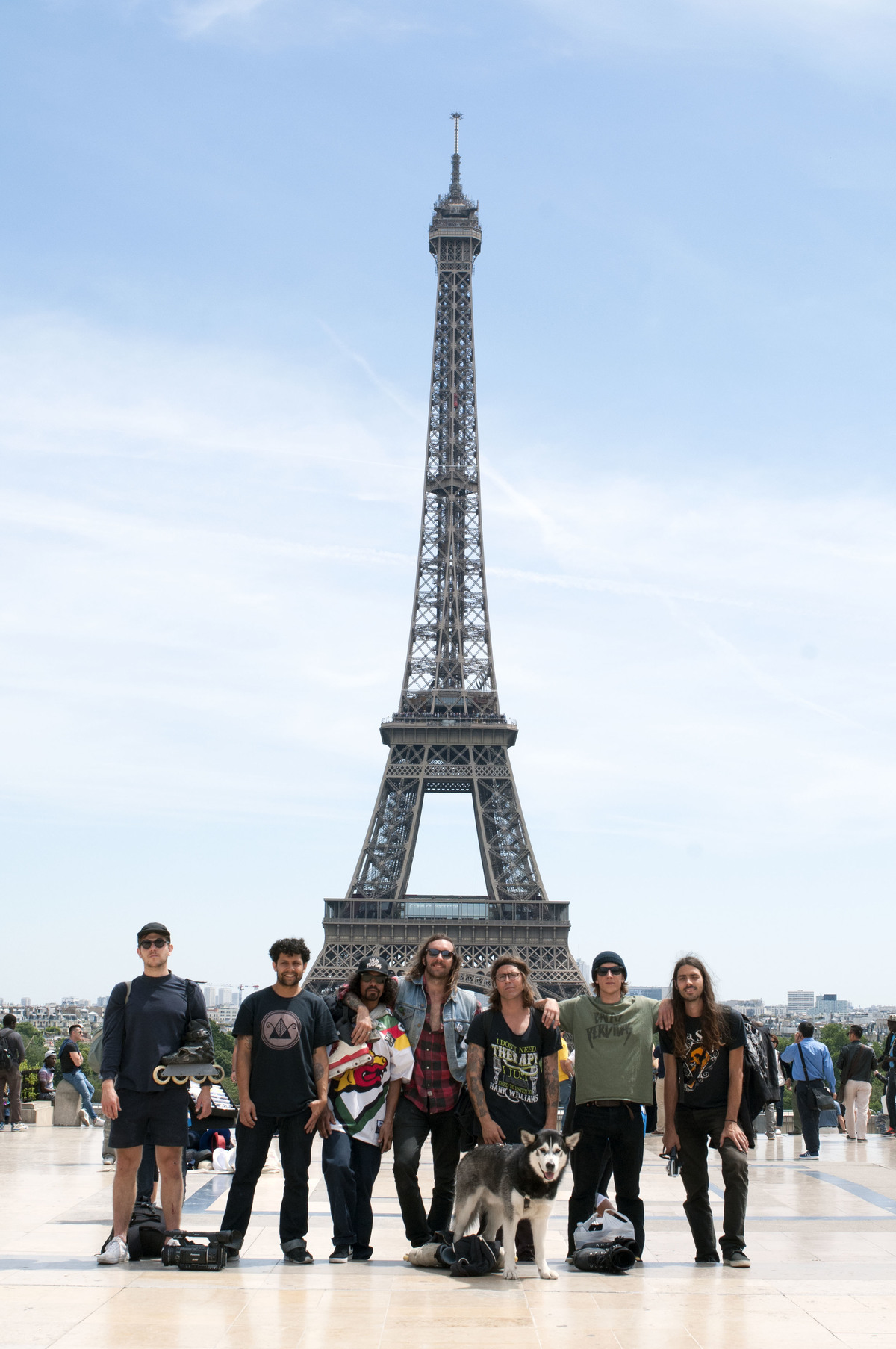 Words and photography: Cavin Le Macon
For the first night they kind of hit a rough spot because the place they were supposed to stay fell through (nothing new on a skate trip) so they texted me on their way from Lyon for a good spot to put the tents up so they would figure out the rest of the week.
It’s not like me to let my friends sleep outside so I asked the mother of my GF if the guys could sleep a night in the house.
She said it was okay as long if they were okay to get up early because she works at 8:30.
The crew arrived around 10 consisting of Marc Moreno, Adria Saa, Leon Humpries, Matty Schrock, Mike Simpson, Kare Lindberg, Chris Dafick with his wife Renata and Brandon the dog.
Chris and his girl had a spot to sleep at some of her friends in Paris so it was 6 guys and a dog.
Of course the guys where hungry and the only thing that was open was a pizza place. I brought Chris to the train and walked to the pizza spot where the guys made best friends with the owner who gave them 2 bottles of wine and a bottle of coke for free. Great start of an awesome upcoming week. The pizza and wine went in and everyone went to sleep.
Next morning during breakfast I showed the guys some pictures of Paris spots from my database of Paris so we devised a rough plan for the week.
Chris got texted a place to meet and after some coffee we picked him up and left to Creteil, an area just outside of Paris that got popular during in the older days of Paris rollerblading.
I like to bring people here to see what they can do with some of the spots that been skated in the heyday.
First spot where they famous banks and the crew loved the place. Looked around for a good half hour then started stretching and made some plans. 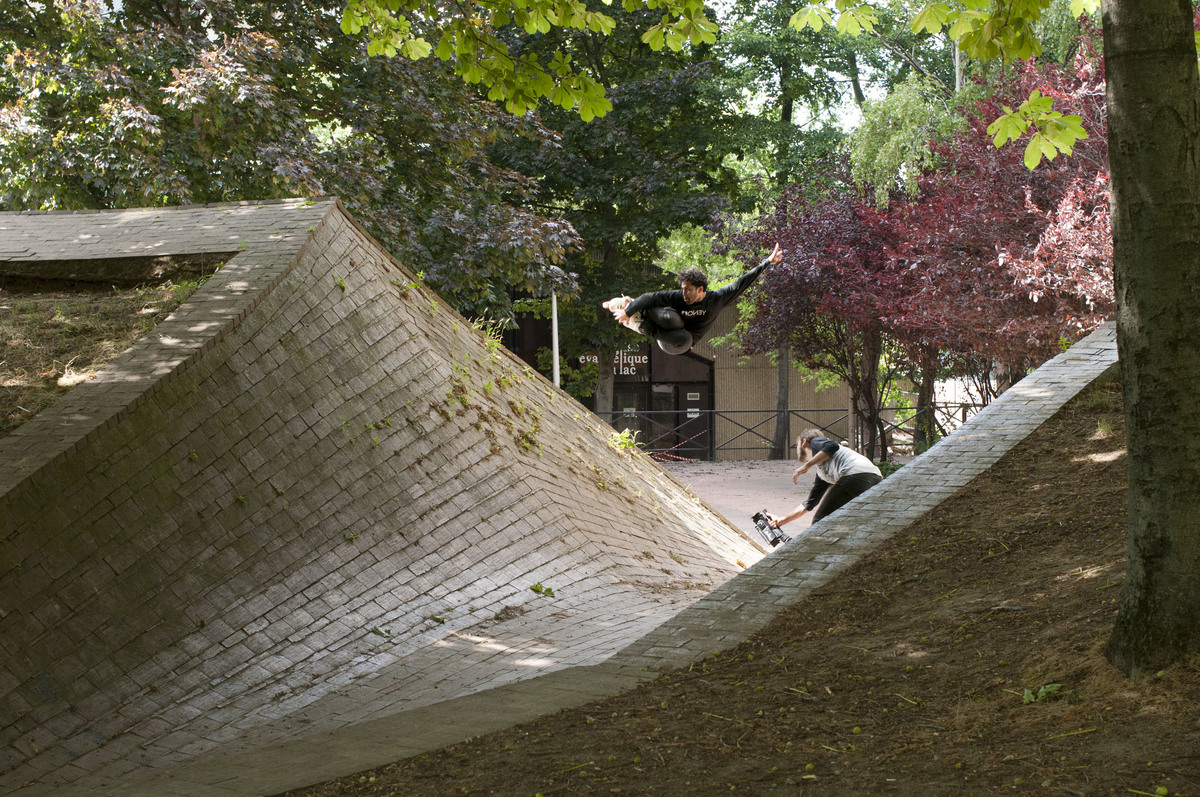 Since there were three cameras they had the advantage of filming more than a single trick at the same time.
I decided to leave my video camera at home but took my photo camera with me.
We skated the spot for a few hours and I was running in between tricks not to miss any of them, I was shooting Mike when on the other side Matty laced this insane line and we heard everyone cheering.
When I thought we were done at the spot someone would find another trick to film.
Everyone got thirsty and hungry so we went to get food and drinks. When parking our van we stumbled on this roof roll to rail to bank and it had Leon’s name written all over it. A parked car was in the landing, not really in the way for landing it, but definitely in the way to shoot it.
The owner of the car happened to walk by and saw us on the roof and asked if he should move his car, needless to say we said yes.
An older lady decided she was not having us on the roof so Leon had to be fast before she freaked out. He rolled in once to check the speed, and try hit the rail but leaned in the wrong side, While he climbed up for his next try the woman started screaming in French so it was now or never.
Leon works well under this kind of stress and laced the trick picture perfect. We thanked the woman and went out to get drinks and food.
After losing Leon for about an hour we skated some down ledges next to the water. I showed Leon a bank to ledge that hasn’t been skated that much yet.
We waxed the spot, figured out the line and after the first try a woman came out on her balcony and said she was not having it, we tried to reason with her and said we needed just five minutes, without saying anything she went back inside and returned with a bottle of coke for us and let us do our thing. Guess she liked what we did after all.
Day one was a great success and I couldn’t wait to see what the rest of the week had to offer. The guys stayed with … and his mother.

We started day two with a cliché visit of the Eiffel tower, got the usual shots and I bought them all tiny Eiffel tower key chains like I love to do for my visitors. We went to skate another old-school spot „The Dome” or palace de Tokio.
None of the guys ever skated this spot and they just wanted to skate this legendary spot. Some nice clean tricks went down until Mike did a stair bash kind of trick and launched Leon’s brand new fisheye to the ground. The lens landed on the glass on the floor and spinned around for 10/15 seconds. Everyone froze while Leon grabbed his lens.
NOT EVEN A SCRATCH!!! How???
That was a sign to move to some other spots.
What I liked the most about bringing these guys to spots that maybe got killed years before is that they would find their way to skate this obstacle but also when you think it was done they would pull out more and more tricks. If the ledge was killed grinding down why not put a board half way the stairs so you can grind it up.
Matty in general would just continue throwing tricks after trick with his cigarette in his mouth like a real cowboy. 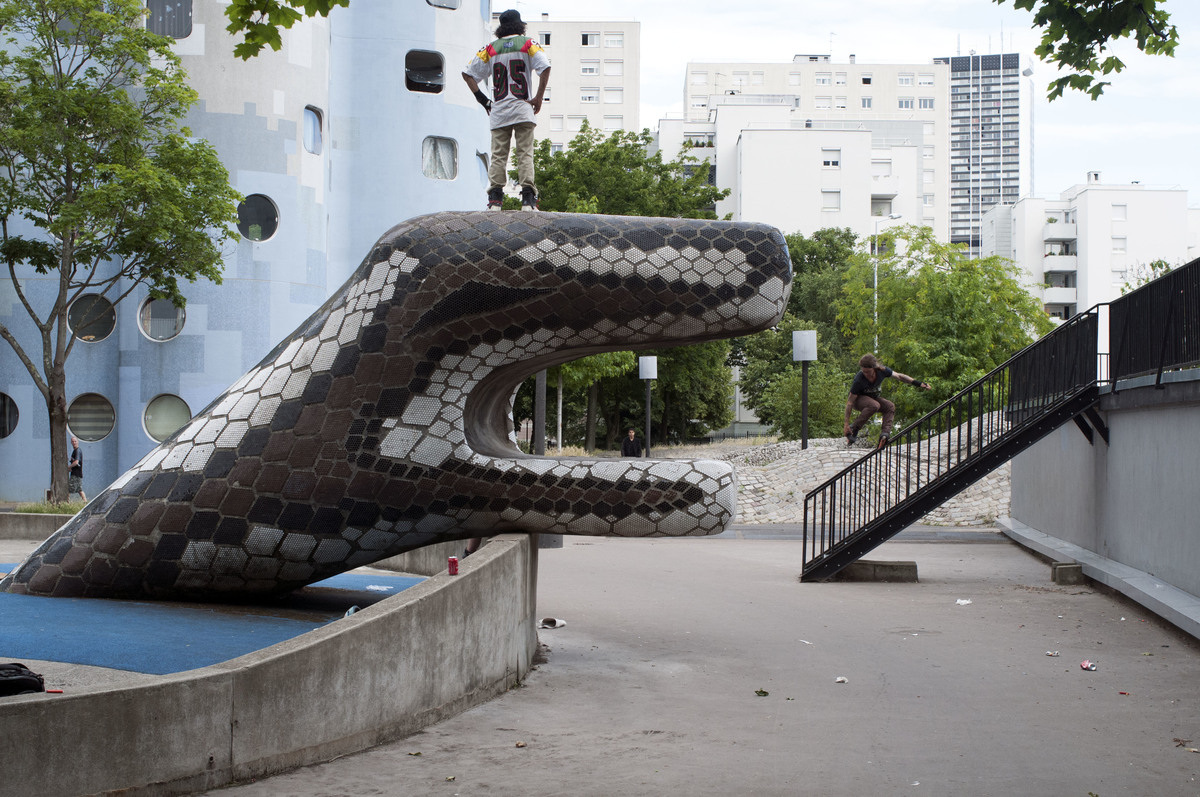 Day three was planned for Place de Italie/Chinatown area. I arrived a bit later and when I showed up at the spot Leon was already busy getting a line done. Brandon was sleeping on the floor and seemed to be fine with everything happening around him. Every day we had a few Parisian locals with us but today was the biggest crew of all the days, around 13 people in total.
Our 3th or 4th spot was a simple roof to grind to drop that Chris stumbled on. We had to climb a fence to open a port so we decided to go in only with the camera crew. Marc on the fisheye, Leon on another roof for the long and Brandon and me on the grass for a cool picture. 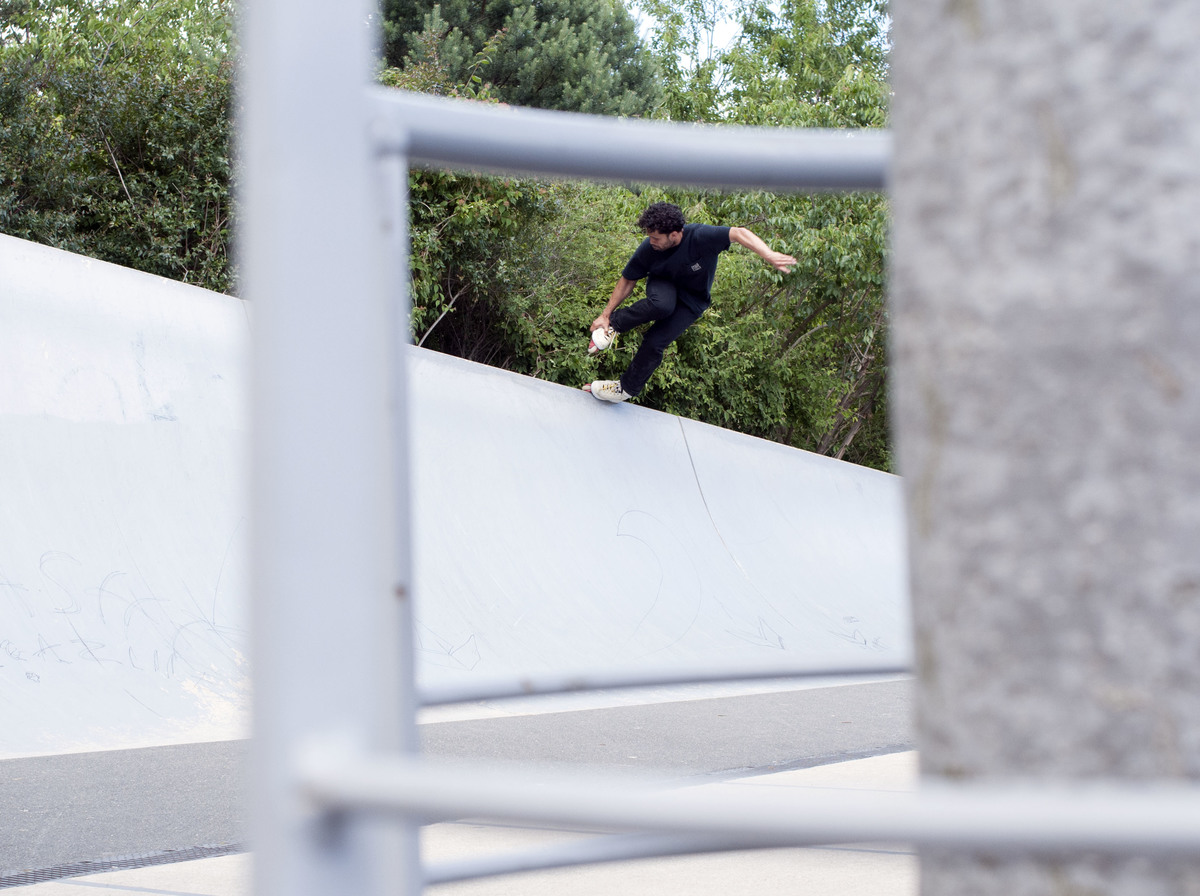 Chris failed on the first few attempts and made himself ready for his next try,when a young thug Parisian guy drove by on his scooter doing a wheelie, needless to say I shot a picture of him and Leon films his manoeuvre. Young thug guys in Paris are not really fond of getting filmed in general and this one was no exception. He got of his scooter and start screaming in French to Leon, we all understood him without understanding him and made him clear in French English and Spanish not to worry we would delete the footy (sure we would) so he had nothing to be mad about. Well the thug was not having it and tries to reach for Leon’s camera, Leon pulls back and in one second Adria is through the fence and in front of young thug. Chris, Marc and myself are in the back of the thug and eight other skaters on the other side of the fence and let’s not forget Brandon the wolf. Young thug didn’t care about this all and still tried to act gangster, Adria pushes him and makes him aware that we will fuck him up if he doesn’t go his way. Well this only fuelled his rage and he walks into one of the houses screaming something, I ask Stan what he said and find out that he was getting his knife. Me knowing Paris suburbs I tell everyone to grab everything and bounce. Marc and I are last to leave since we had to pack our bags when I see the thug coming out of the building with knife in his hands. We skated away fast as hell. Yes we could have wooded his ass easy but I don’t want ANYONE getting stabbed by a thug on my watch. The kid chased us down a few blocks and it made me look over my shoulder for the next 2 hours every time I heard a scooter even when we were two arrondissements away from Chinatown.
Paris never seems to bore me. 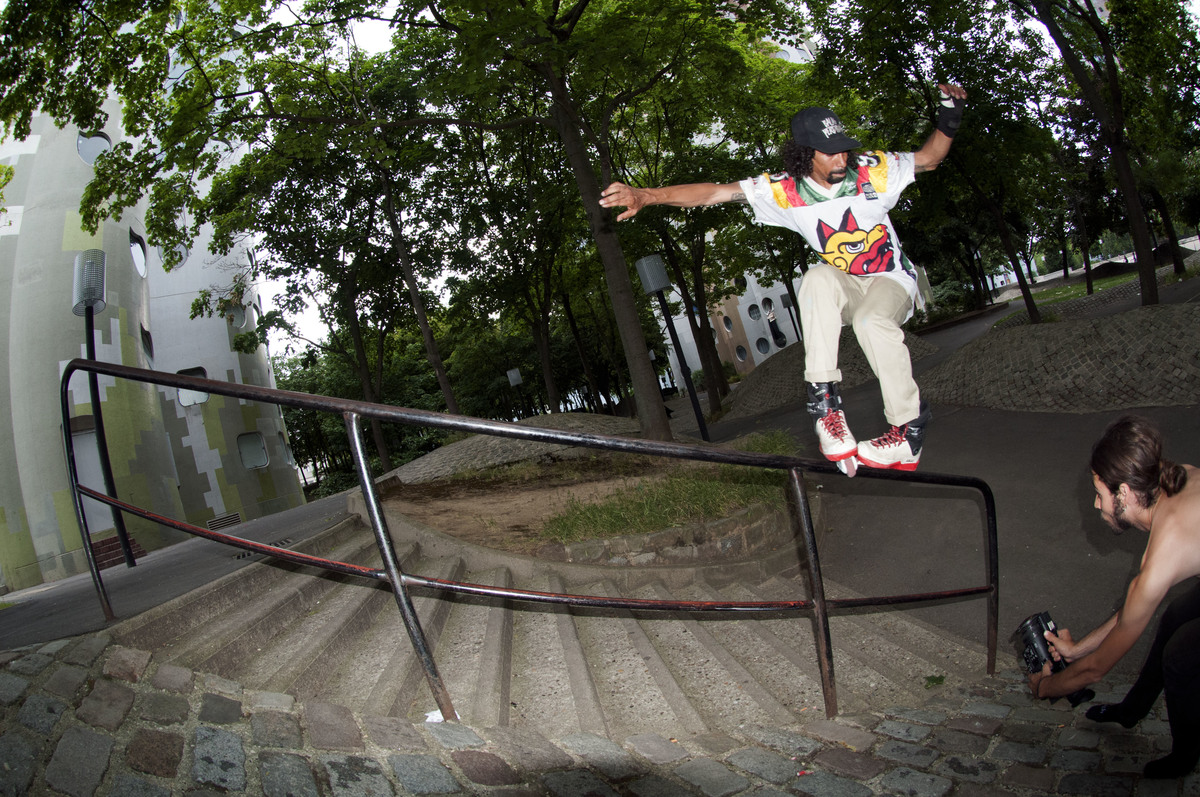 The fourth day was the last day after two weeks of skating and traveling.
Kare left for home in the morning back but he got replaced by some friends from Lyon that came over for a day.
We skated a new ledge spot, played around with a huge snake and some square drop rails.
It was a hot day but that didn’t stop the crew from getting clips. After some food and a long day I decided to go home and see the guys later when they would stay the last night with me again.
When they arrived I asked if they skated some more (me thinking they would been too tired after some food they got) and they surprised me showing Matty lacing the gnarly topsoul transfer with his cigarette in his mouth like it was nothing.
Half of the spots we skated where maybe old-school spots, maybe cliché for a lot of skaters but these guys gave new life to those spots, and most of all had fun in what they were doing.
I can’t wait to see what they filmed during the rest of the year.
Go and support. I know they would support you.
The pleasure the privilege is mine. 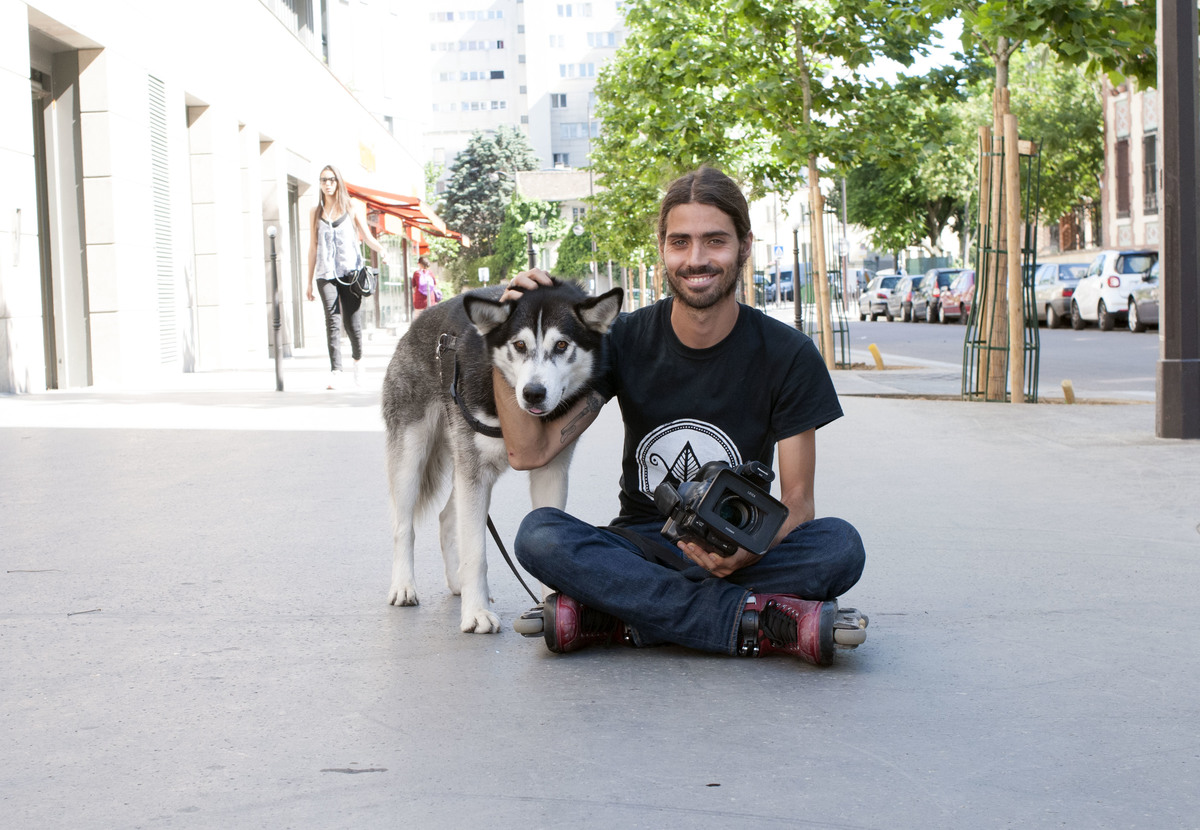