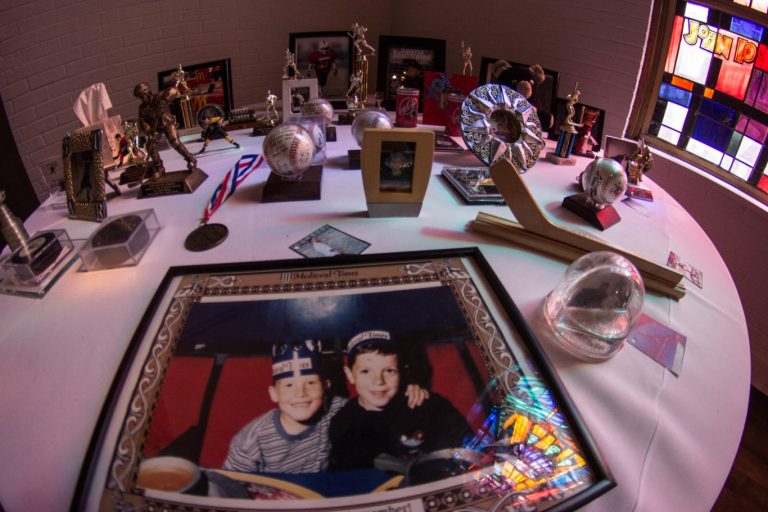 Photographs by: Joseph Gammill and Gino Gotelli
Text by: Andra Maldovan
On March 11th, 2018, the Texas skate scene came together to celebrate the life of Keaton Newsom.


Keaton’s mother, Andra, provided us with a few words and insight on Keaton’s life:
Thank you from all of my heart for the amazing stories shared this month about Keaton. There are no words that can truly express my sincere gratitude.
Keaton, growing up, was full of life. He had an infectious laugh, a beautiful smile and a precious way of always meeting a stranger but becoming a friend. He made a person feel they had been long time friends after just a few moments together.


John (Sullivan), myself and a few friends were talking last night – he asked how Keaton started on this path of rollerblading.
I thought I would tell the story. Keaton was about 5 years old. We were walking by the waterfront in San Francisco. He looked up at me and said, “I want to be a hockey player”. I thought to myself, “how would he even know what hockey truly was?” but I said “ okay, when do you want to start working on that?”, [and] he suggested when we got home.
I had to look up what hockey really was – as I’m from West Texas and this was not football. So, we studied the sport and he said he wanted to play Ice Hockey. Off we went to try on skates, starting a life long love of skating. He started playing ice hockey at 6 years old. It was adorable – more like a stack of dominoes – if one fell, they all fell. Keaton looked like Ralphy [from the classic A Christmas Story]– with his snowsuit on. It was hilarious to say the least. But, his determination to learn how to skate and be good at it never faltered. Practices were typically at 6am which meant up by 4:30am to have breakfast and arrive at the rink by 5:30am dressed and ready, except for his skates. I probably tied 1,000 skates over his lifetime and wrapped 500 sticks. He loved ice hockey. He grew into a beautiful skater – I always kidded he should be a figure skater (to his horror). He was always captain of the team and played center. Keaton was chosen to be on a travel team from 8 years on until we moved to Singapore and had a wonderful few years traveling around the United States with his team.
When we arrived in Singapore, the hockey was not as strong, being (1) on the equator and (2) in an Asian country. The Canadian Group there had an after-school hockey program which he joined. But, in comparison to the US, it wasn’t enough.
One day learning about Singapore, we walked upon a skatepark and a light went off in Keaton’s head – “Mom, I want to rollerblade.” He was so excited to find another way to skate. Off we went to Eddie’s Skate Shop and bought skates. He probably spent every day rollerblading from that moment forward. He loved the challenge of learning new tricks and would watch videos to learn more. He worked hard to become the best he could be. During this time, there were many friends he had with travels to the X Games or the World Games and comps just around the Asian countries. He kept in touch with all of these guys for all of these years. And many have reached out during this time.
His summers were spent at Eisenberg’s in Dallas and Woodward in California. These parks became his summer home in the United States. How lucky was he!!
His passion grew to a point; the park wasn’t challenging, so we built a small skatepark on the side of the house – ramps, half pipe, rails, etc. The kids would gather daily there to skate.
I remember the kids rolling in and out of the house, to get drinks and then heading back to the park. It was a very special time for all of them.

[Back in Singapore] We drove up to Malaysia many weekends to skate at a large training park in Ipoh right outside of the Kuala Lumpur city limits. He would invite as many friends as could fit into the car to travel with us. Keaton was always eager to spend the weekend there, skating. Many events happened while at that park – friendships formed and the kids became a second family.
I want to add a side note that I always have held in my heart. After 9/11, Americans were “grounded” as expats for a while. But, we chose to travel to KL anyway. When we arrived at the park, all of the kids there, took off their helmets and bowed their heads. They all then walked up to Keaton one by one and said how sorry they were about the attack. And, how he hoped they knew, although they were Muslim, they were not a terrorist. It was so moving – these kids were 8 – 15 years old. That was the bond these kids had formed. And, that day, they all skated in honor of Keaton and the United States.

Many of you know how the story continued once we headed back to the states. Keaton had an amazing skating career with a deep passion. He loved the camaraderie, the life at the park and the competitions he was able to attend. He loved designing skates, T-shirts and skating-wear. He loved being a “fruitbooter”! Thank you to all of you that loved skating with him. He was so blessed to have each of you in his life.
From his Mom…..
Keaton was my heart and soul. Yes, we had our good days and our bad. We loved`, we fought. We laughed, we cried. We had 29 years together and I would say we could not have packed much more in during this time. And, as so many of you witnessed, he was loved. He gave his heart to so many. Apparently, to a few, he also gave his clothes! He lived his dream for many years with the travel, ice hockey and rollerblading. He lived for many years enjoying YOU, friends, family and never meeting a stranger. Our lives were enriched to have known him or be called a friend. I was blessed to have him as my son.
I write this boldly as I want to be sure everyone that might read this to understand the depth of anxiety, depression, CTE and suicide. Whatever the concoction of the above, it started to take over Keaton’s happiness which then took Keaton’s life. He was too young and loved for life to be cut so short.
Please do not hesitate to seek help – do not give up trying for anyone in your circle of family and friends. Hug each person and tell them you love them daily. Remember the way someone sees the world may not be the same as yours, it often might be very very different. I did not recognize the extreme differences nor understand how desperate he was. This is very hard for a Mother to now know.
Life is short, live it as full as you can. Give to give because you can – it can be a small gesture to you but a milestone to another. Love because you can.
I have witnessed how troubled and just heart broken each of you are but I know Keaton never wanted to hurt any of us, he only wanted his pain to go away. I loved Keaton with all of my heart, and I know you did also.
May God bless you and keep you safe. Keaton is shining down – he’s a bright star new to the sky.