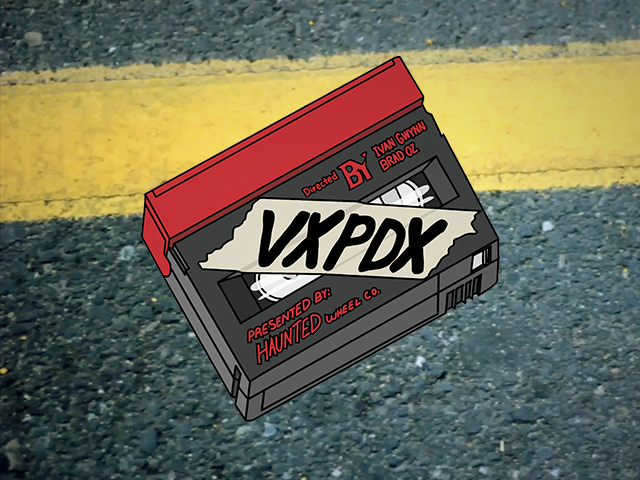 VXPDX TRAILER 1 from HAUNTED on Vimeo.

It was December 2016 and the streets were covered in snow; a rare sight to see in Portland. Ivan Gwynn, a few blade friends, and I, Brad Oz, met up at the local watering hole. Ivan and I couldn’t stop ranting about how dope Bacemint’s Valo Philly was — flawless “mixtape” soundtrack, session spot destruction, and the best fish guys in the business. It felt refreshing and fun; like blading spot to spot as a kid felt.

The New Year of 2017 was just around the corner, and we decided to make our own resolution — get a Sony VX, film some creative tricks, and have fun collaborating on a new project.

Early in the year, we purchased a mint condition Sony VX off eBay and a Century Optics Mark I Fisheye to match our favorite classic blade film aesthetics and vignetting. Ivan, a videographer and a perfectionist, drew inspiration from projects by Carter LeBlanc, Ian Walker, and Geoff Phillip.

DUSTING OFF THE BOOTS

Ivan and I got a head-start to the blade season in February 2017. We took the opportunity to dust off the blades, find some fun chill obstacles, and test out the new video rig. By Spring 2017, we had enough footage to nearly fill a small section and started hyping the possibility of the project to the crew.

The crew joined in at their own pace, being that we all have different schedules, careers, and obligations. David Wittman performed some picture perfect tricks while his son, Henry, cheered him on in the background. Stephen Babcock is a really great up-and-comer from the Bay area and did some insane negatives. Steve Durasa, from Detroit, MI, moved to Portland halfway through the year and pulled a great season of effortless fish brains and cess slides. Ivan and I share a split section in which we blade the same obstacle in different ways. Dustin Jamieson has a section filled with insane tricks that only Dustin can do.

Nine months into our yet-to-be-named film, we were still referring to the project as “VXPDX” and decided to stick with it. We wanted a simple name that says it all: VX, for our tool of choice, and PDX, for Portland. Plus, we already had a rare intro clip of Beetlejuice introducing the flick as VXPDX.

Greg Tuthill, a transplant blader from Texas, whipped up a hand-drawn logo for the project and he did a sick job refining it to the final product. My brother, Matt Oz of Haunted Wheel Co, contributed by supporting the crew with care packages of wheels, tees, and beanies.

We hope that the vibe of this film resonates with viewers and inspires them in a similar way to enjoy blading. The VOD will be available on Sellfy in March. Follow Haunted Wheel Co. on Instagram for updates and official release.