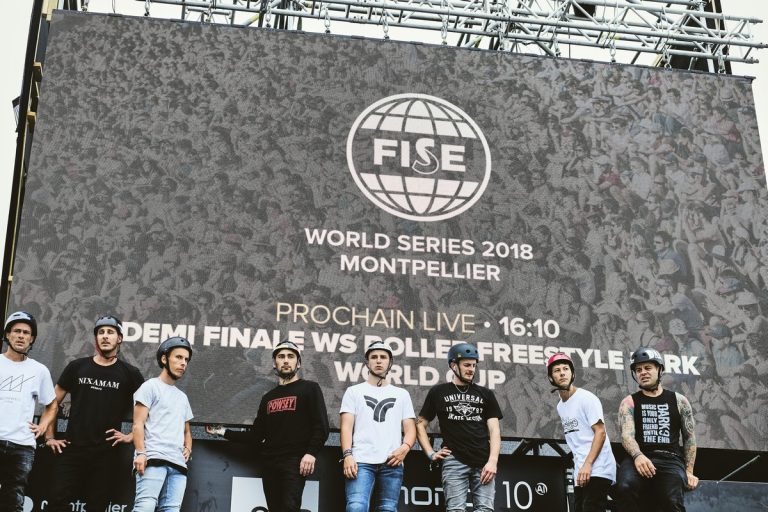 And then came grey clouds:

With the weekend came the chance of heavy rains on Saturday evening too, and that probability played a big part in how things went for the Pro semi-finals. But with the weekend, also came bigger crowds, a lot of pretty girls and a sea of smiling people: Both athletes and spectators know bad weather ain’t enough to slow things down here at FISE World Montpellier!

And if anything, things actually sped up: Here’s our full report on Day #4!

After a first round of Juniors & Am qualification which started in the morning and went on until 2 p.m., the pro bladers were eager to get another session going on the new Freestyle Park. After yesterday’s qualifications, lines were now getting more refined, tricks were getting bigger and airs were flown higher as the trainings went on. With 12 spots open for the finals, and the perspective of a 3000€ cash prize for first place, now was the time for these guys to go all in indeed!

But with that perspective, also came the added rain pressure…

Sunday’s finals being rained on could only mean these semi-finals standings would potentially make for the final rankings. In short, and as the BMX pros demonstrated themselves, it was time for the 24 pros qualified to forget about strategies, and actually put together their best 50 seconds run. And that brought us some hammers for sure, along with some disappointing performances and hard bails for heavy hitters like Roman Abrate with two missed Kangaroo flips in the middle of both his runs, or Julien Cudot falling twice on his first trick, a huge 540 transfer which unfortunately lacked a bit of flair…

But let’s focus on the positive instead:

And let’s start by mentioning the rise of a new generation, as 19 years young Nicolas Servy ended up out skating his elders with a double backflip and a powerful run, full of energy and raw power which if anything, can only grow more refined with time. Meanwhile, Holland’s very own Sem Croft placed second with a great performance, which combined smooth grinds, clean spins and some smart use of the park overall, touching every obstacle and proving that them Dutchies can roll indeed!

These two cats were followed by some well-known faces here at FISE: Four times champion Romain Godenaire managed to hang onto the 3rd spot this time as he pulled some of his signature moves out of the bag, while Hiroshima winner and newest Roces pro Joe Atkinson did his thing as usual and earned himself a safe 4th place. Top 5 wouldn’t be complete without everyone’s favorite, Australia’s CJ Wellsmore who in typical CJ fashion, only learned about the degrading weather conditions after the whole semi-finals were over:

But with the uncertainty of these rankings actually lasting long enough for these five guys to be flown to the next FISE stop in Budapest, it was time to run to the spine ramp again and watch the second and final heat of pros wrap up the contest. And quite frankly, no matter how hard they actually went on the ramp, it was impossible to match the incredible night atmosphere which usually surrounds these finals and bring them to a whole other level altogether…

In the end, Julien Cudot took the win and things went on like nothing really happened.

Back on the actual park, the women and second wave of amateurs saw their time cut short by the first rain drops, and soon enough it became obvious no more blading would take place on Saturday anymore. Umbrellas got purchased, groups split, and everyone went home: If some more wet partying went on in the evening, it was time for your favorite action reporters to enjoy the warmth of a hot bath and comfort of their beds:

Over and out, see you tomorrow for our 5th and final FISE update!

In the meantime, don’t miss a beat and follow #FISEblading2018 for all things inline at FISE World Montpellier!