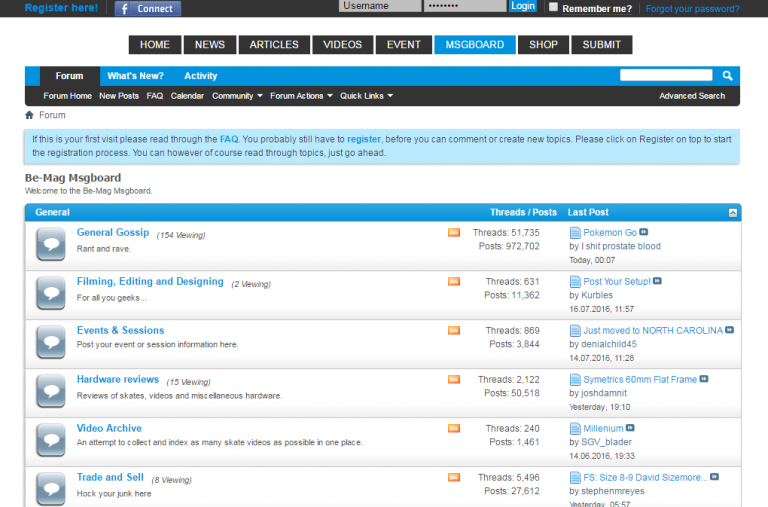 For Your Consideration: Burning Questions – the Monday Edition 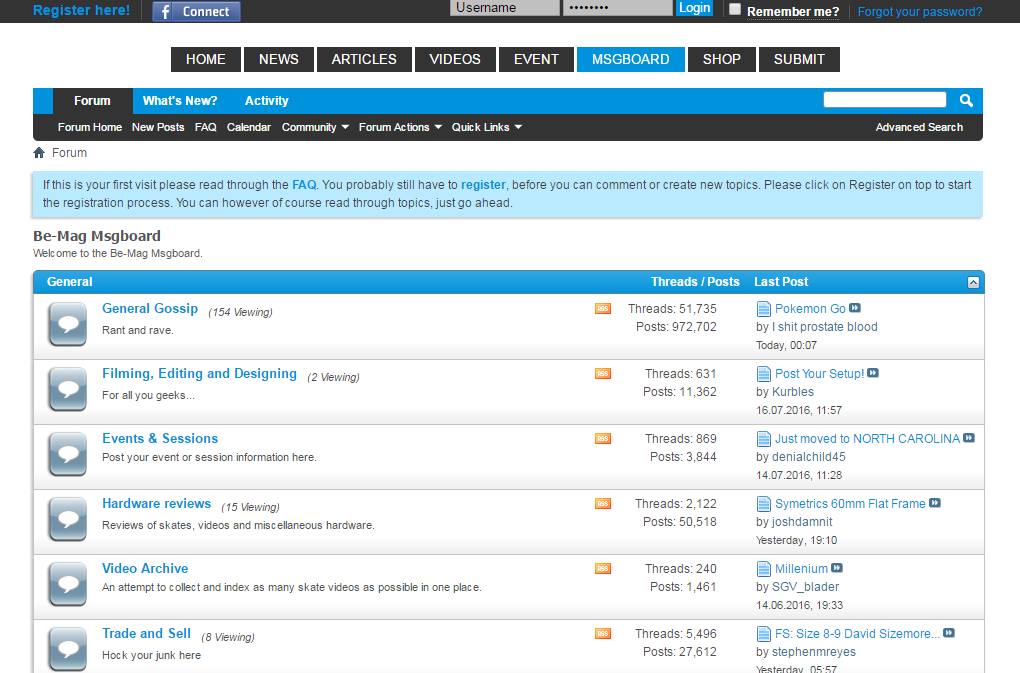 Since we’ve already divided up my little writing project into a few different posts, we figured ‘why not go whole hog’ and do this last one as a Monday extravaganza. In case you’re unfamiliar with the infamous Be-Mag Message Board, Monday is the username of one of the Board’s most longest-lasting and thoughtful users—not merely the day everyone experiences after Sunday. His calling card is the link at the bottom of his posts advertising his famous ***Blowout Sale*** where he’s slowly parting with several generations of blading-related accoutrements ranging from wheels, frames, and skates to out-of-print magazines, clothes, and accessories—much of which ought to go straight to Tracy White’s Blading Museum because of their historical significance.

As something of a prodigal son on the Board, I was away from it for many years before returning to it when I began my stint writing for Be-Mag two years ago. In general, I’ve been welcomed back to the board with open arms, due in no small part to Monday’s acceptance and interest in my approach to Blade-writing. In the interest of full disclosure, I should say that Monday is my favorite Be-Magger because of his sincerity, cleverness, humor, and wit. I like to refer to him sincerely as ‘My Dearest Monday’ because I think we need more blatant humanity around this place and we need more acknowledgement from time to time of the sheer insanity of what’s involved in discussing Blading Culture across thousands of miles through millions of miles of internet tubes, through language barriers and meta-cultural blockages, against the crucibles of time and space, amidst the chaos and complexity of our own lives and civilizations, navigating nuance and bias to discuss things like backslides and years bygone.

So without further ado, I present to you my answers to some of My Dear Monday’s most burning questions.

Monday: [What are] the karmic long term effects of stealing trick names/tricks and the resulting inability of rollerblading to invent itself?

Our inability to invent rollerblading is the subject of general cognitive limitations and the English language. If you would deign to read the article I wrote some number of years for ONE, you’ll get a whole lot more detail about the following. In case you won’t, I’ll say it like this: rollerblading’s conceptual schema is largely English-based. Here’s the short version: Non-English-speaking rollerbladers have to borrow a good deal of lexicon, pronunciation, grammar, and syntax from English to use rollerblading jargon. For instance, in English we say Bill drives a red car. In Spanish they say that Bill drives a car red—or if you like, a car, a red one. All rollerbladers then—because their language is moored to English—say topside soul. No one says soul-top or soul-topside—even if their native languages would have them construe it in those ways. Because we’re stuck with English—we’re stuck with its limitations. These small differences affect the kinds of ideas our minds are able to handle. Red car and car red are pretty basic, so let’s up the ante a little.

English prepositions cannot specify geon shape. Like this: Paul walked THROUGH a parking lot. Well enough, but the word THROUGH in English won’t tell you the shape of a geon—in this case, the parking lot. In other languages—using prepositions to specify geon shapes is both possible and everyday. So, when rollerblading invented—from scratch mind you—the dual notions of farside and topside, we invented a totally novel, totally original conceptual landscape in which an English preposition COULD specify geon shape: a round rail for a farside soul or a square rail for a topside soul. The problem is, no English speaking rollerblader was prepared to deal with that level of prepositional complexity, and so, because of conceptual limitations of the English language—which rollerblading is tied to—we couldn’t fully break out of conventions and create our own truly unique activity and language. As a result, a topside soul can happen on a rail of any shape and the age of dynamic, non-English-based conceptualization ended just about as soon as it began.

Another problem with stealing language from other activities like surfing, BMX or skateboarding is wholly unavoidable. Much of the conceptual language we stepped into more than twenty years ago was already set in hardened concrete. For instance, all of the so-called ‘action sports’ use numerical styling for their spin-names: 180, 270, 360, 540, etc. This is because of a shared embodiment we can, none of us, escape. Other basic (one-dimensional) conceptualizations like frontside and backside are also inescapable. Both are good, well motivated concepts that have stayed with us from the nascence of surfing all the way to the present day. Shared cultural aspects of all action sports dictate a certain level of uniformity—we all make videos edited to songs; we all publish photos of particular named tricks or stunts; we all wear similar clothing; we all wear protective gear; we all largely skate/ride on similar ramps and obstacles; and we all share a common human body shape.

Long story short, a huge amount of linguistic overlap is essentially unavoidable. However, I say that stealing language from other action sports is toxic because don’t need to import other cultures into ours at the cost of developing and promoting our own unique culture, ideas, and wheel-oriented embodiment. 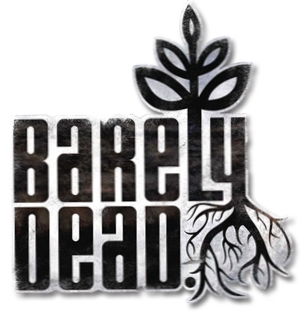 Monday: Please speak to the psychological damage caused by hate from other sports that result in phenomena like posting links to Barely Dead whenever Rollerblading gets attacked online and the inability to break out of this vicious circle of victimhood and severe insecurities.

Frank: This is by far my favorite question, which is handy, coming from you, My Dear Monday.
The question is, why do rollerbladers wallow in their victimhood. Answer: Easy—we’re (largely) white men and white boys and, culturally, we’re not accustomed to being marginalized. Most of us haven’t dealt already with a lifetime of prejudice, bigotry, violence, altered expectations, and general discrimination that so many others are made to take in stride. For instance, it’s common—especially on the internet—for women to be told to get back in a kitchen and make somebody a sandwich. Sometimes jokingly; sometimes not. That wouldn’t in itself bet the worst thing, but the truth is, they get called a BITCH if they can’t take it in stride.

As white dudes, we’re absolutely unaccustomed to having to take things in stride in that manner, and so we flop on the ground wailing and shrieking when we don’t get our way—or when we’re asked to toughen up the way society has generally expected women to.

It doesn’t mean it doesn’t still suck, but that’s why we wallow, plain and simple.

Monday [What is] the genesis of steeze?

Frank: Speaking of white people, steeze is something white people appropriated from black people. More could be said on steeze being a portmanteaux of “style” and “ease,” but I don’t think anybody cares about that sort of etymology—so let’s just stick with the idea that it’s an idea white culture stole from black culture.

Monday: Get to the bottom of why rolling topsides and generally having low standards seem to be okay in [2016].

Frank: This is another of my favorite questions of this exercise. Two reasons. First, there are too few of us left to run people out of town for not being able to skate well. It’s a consequence of the reality that there are only about 20 or 25 rollerbladers per million people in any general population. If I live in a city with 2 million people, that means that 50 people in that town rollerblade. If we kick out five of them because they roll their topsides, they’ll never come back. And then we’ll only have 45 guys in town. Multiply that by the global population, and you wipe out thousands of the meager few of us who remain.

The second reason is because of technology. All of our years of lamenting and wailing for better tech have resulted in just that—better tech: wider soles and shorter frames—the two things you need to make royales and topsides easier. Those of us who learned how to royal and topside on frames 3” high with no grooves feel the burn, but the younger guys didn’t have to bother with that, and so they learned THEIR royales and topsides in the dookiest way possible because we gave them the skates that made them learn it that way.

Going back to your first question, maybe Karma is real after all.

Monday: Speak to the (almost) criminal uneducatedness of rollerbladers when it comes to the hardware they use.

Frank: The history of rollerbladers preferring looks over quality, of not caring about hardware, of ignoring basic blade technology runs, to use a twenty dollar word, proximad (that is, back to the source). We’ve always been this way. When Rollerblade first offered rockerable wheel setups, we went anti-rocker. When Cosmo offered wheels in 85a, we bought wheels in 92a from Senate’s carnival of cool. When Razors first introduced cuffs of different flexiness, people wanted the baby blue ones—not because they were soft, but because they were baby blue. When Salomon dialed in their flat frame, we bought Xsjado’s idiot MOOK frame.

We are this way for the same reason we have a borrowed identity: creative thinking is hard and most of us don’t want to do it. Also a lot of us have embraced the culture notion of ‘I don’t give a fuck,’ which is good for skating through crappy surfaces, but very bad for embracing existing (and previously-manufactured, often totally bad ass) blade tech.

Maybe soon 3D printing will be a thing.

Monday: What is the reason for Richie Eisler having more +rep on the Be-Mag Msgboard than Monday even though Monday has roughly 21,500 more posts?

Frank: I still don’t really know what +rep is. If it were up to me, you’d have all the +rep, My Dear Monday.

And with that, I hereby suspend this first round of questions. Hopefully this project will continue now and again with quicker turn around. I’d like to thank all of the Be-Maggers who asked me a question, and I’d like to ask for the continued patience of those whose questions I haven’t yet had a chance to tackle.

I’d also like to thank Freddy White for his help and encouragement with the project, Josip Jagić for his keen editorial assistance and advice, and you, my dear friends, for your consideration.